A major flood warning is in place for parts of the Mid North Coast, with flood peaks on the Hastings River and Camden Haven river exceeding previous records.

The Bureau of Meteorology said “major flood peaks” have been observed, with further rises possible due to further rainfall being forecast this weekend.

Here are the flood warnings across NSW:

Is your town or suburb impacted by the flooding across NSW today? Get in touch:

Motorists in all suburbs of Sydney should take “extreme care” if they venture out on Saturday, with up to 200mm of rain expected to bucket down on parts of the city in the space of 24 hours.

In an alert issued early on Saturday morning, the Bureau of Meteorology said “reduced visibility in very heavy rain will make road conditions dangerous during Saturday”. 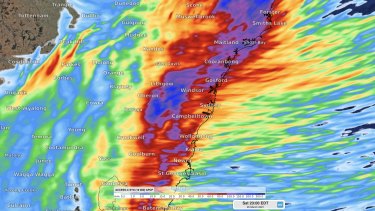 The latest model guidance on Saturday’s rainfall in and around Sydney. The heaviest falls could occur north and west of Sydney, targeting the Blue Mountains, Central Coast and Lake Burragorang / Warragamba Dam. This model (ACCESS-C) suggests some areas could see >200mm.Credit:Weatherzone

“Motorists are advised to take extreme care,” the bureau said.

Flooding and fallen trees have already closed some roads across the state, with a landslide recorded at Dorrigo in northern NSW. In Port Stephens, flooding from persistent rain has damaged Foreshore Drive. 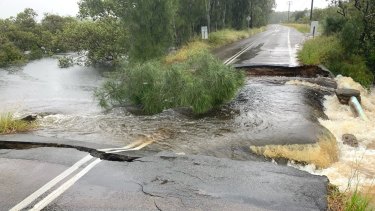 Up to 200mm of rain expected for Sydney with evacuations, flooding on Mid North Coast

Good morning and welcome to our live coverage of the wild weather in NSW today.

And here’s what the rain radar looks like this morning:

We’ll bring you the latest as it happens.