Washington: For years, Donald Trump has survived scandal, scorn and defeat and still managed to keep his warlord grip on the Republican Party.

Even last month’s epic string of disasters, from his candidates’ losses in the midterms and his dinner with white supremacist Nick Fuentes and professed Hitler-fan Ye (Kanye West) to the tax fraud convictions of two of his companies, might not derail him. 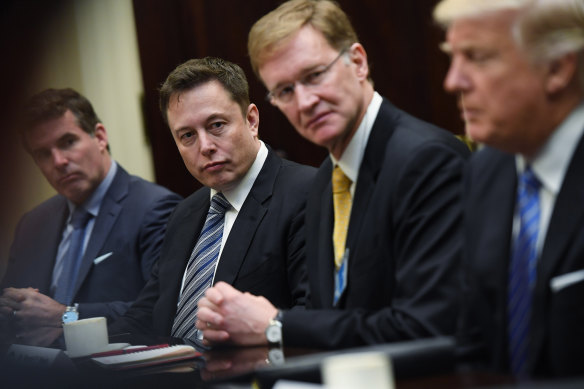 Elon Musk listen to then-president Donald Trump during a meeting with business leaders in 2017.Credit:Washington Post

In the critical weeks since his November 16 campaign launch, the person who has dominated the right-wing attention economy isn’t Trump. It’s Elon Musk.

Musk didn’t just take over Trump’s favourite medium, Twitter. He seems to have done so for the explicit Trumpian purposes of striking back at his critics, “owning the libs,” and stoking the sort of generalised chaos that was once Trump’s calling card, before he was banished from Twitter and took up exile in the empty wilderness of Truth Social. He’s succeeded on all fronts. 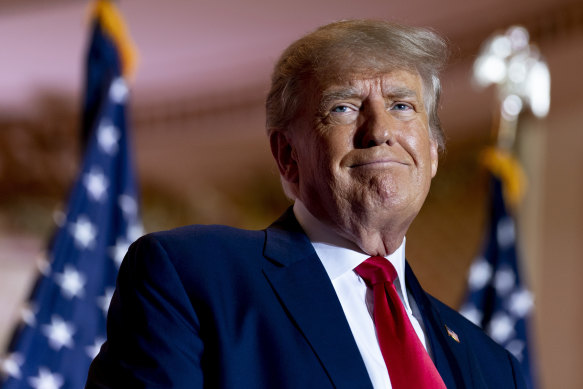 To defend or not to defend Donald TrumpCredit:AP

Of course, Musk also broadcast his solidarity with the MAGA masses by ending Trump’s Twitter ban and inviting his return to the platform. But Trump, probably because he owns a big equity stake in Truth Social and knows going back would nuke its value, has so far resisted the heroin temptation of taking up his old Twitter habit.

That hasn’t stopped other figures from the Trump menagerie from gleefully rushing back as soon as Musk re-platformed them. It’s made him an overnight hero for accomplishing what Trump, through all his threats and tantrums, never could: prying Twitter away from the craven Silicon Valley gatekeepers and restoring them to a position of prominence.

Musk is the toast of MAGA world, as this grateful tweet from the newly liberated Roger Stone makes clear:

What bonded Trump’s most loyal supporters to him, even after he lost reelection, was his unfailing ability to drive their enemies — mostly liberals and the news media — to bug-eyed distraction.

But it’s Musk who has taken over the banner of chief troll. Congressional Democrats blame him for a spike in hate speech on Twitter and threaten to haul him before Congress.

Democratic voters think he’s Darth Vader: A new NBC poll finds 64 per cent of Democrats have a negative view of him, with only 9 per cent having a positive view. Like Trump before him, Musk only seems to grow more energised by their scorn.

He annoys the media, too. Most of the self-dramatising reporters who threatened to leave Twitter but then stuck around have whipped themselves into a scornful frenzy over Musk’s leaking of the “Twitter Files” story on Hunter Biden and also over his open contempt for the mainstream press.

The leaks and their impact have further endeared him to many on the right, for whom he is suddenly much more fun and exciting than tired, latter-day Trump. 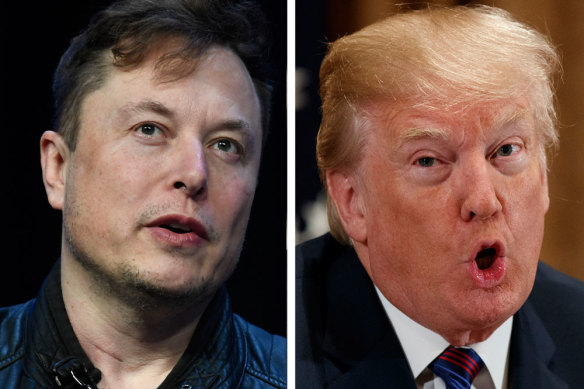 Musk also supplies the zany soap-opera factor Trump once provided by constantly hiring and firing people in the most absurd and humiliating way. Instead of bringing in Omarosa and Diamond & Silk, he’s brought in a bunch of hopped-up VCs and Bari Weiss.

Instead of firing White House chief of staff Reince Priebus on the airport tarmac and tweeting about it, he fired Twitter general counsel James Baker and tweeted about it.

He’s Anthony Fauci’s new chief tormentor. If what gets you jazzed is watching vituperative billionaires start ridiculous beefs with randos and refuse to back down, well, Musk has taken that baton from Trump, too. As The Daily Beast’s Matt Lewis aptly noted, “If you’re into drama and weird s–t, you don’t need Trump any more.”

But what’s hurt Trump the most, I think, is that Musk has robbed him of the singular quality that fuelled his political career from the moment he came down the Trump Tower escalator in 2015: You couldn’t look away from him, even if you wanted to.

There are different ways to measure the relative influence and cultural importance of Trump and Musk, each admittedly imperfect, but all pointing in the same direction. Musk has far eclipsed Trump in terms of Twitter followers (120 million to 87 million).

He has supplanted Trump as a subject of Google search interest.

He has even sidelined Trump in the Trumpiest corners of the conservative media.

At Breitbart News, the hard-right website that helped launch Trump’s 2016 presidential campaign by flooding the zone with a blizzard of daily Trump stories, “Musk’s Twitter” is a trending topic at the top of the home page. Trump has all but vanished. 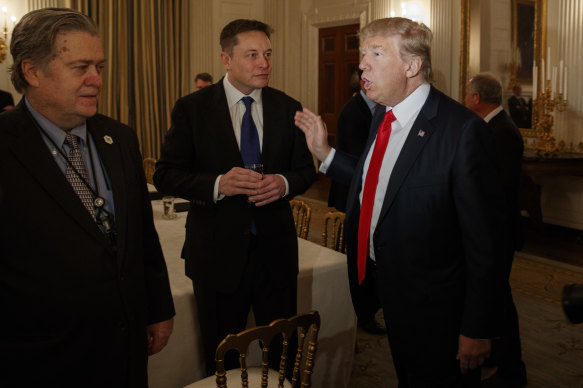 The only Breitbart mention of him that I spotted while writing this on Thursday afternoon was a headline toward the bottom of the page about how his former White House economic adviser Larry Kudlow thinks Trump is in “a ditch” and “losing support left and right.” Hard to disagree!

There’s probably no one with a deeper understanding of the MAGA psyche and what drives it than the former Trump Svengali and Breitbart News honcho Steve Bannon.

I asked him to explain Musk’s sudden ubiquity on the right. “He’s studied Trump and knows how to say the most outrageous s–t and drive the news cycle,” Bannon confirmed.

“Anytime he wanted, Trump could change the news cycle with a tweet. He can’t do that anymore. Now Elon is that guy. He’s throwing bombs every day — look at the Hunter Biden story. It’s blowing up. He has the media on a string. Look at every news site in the country — five stories on him every day. He’s got BDE: ‘Big D–k Energy.’ That’s supposed to be Trump. Right now, it’s all Elon.”

Trump’s political superpower was his exhausting ability to dominate the national conversation and make it all about him. He was all three rings of the circus, plus the clown, the lion and the ringmaster.

If Trump can no longer excite and entertain the conservative masses, it’s hard to imagine that his presidential campaign will ever get out of the ditch. A year and half from now, Ron DeSantis or some other Republican may finally wrest the party back from Trump. But it will be Musk who put Trump out to pasture.