The Pratt family will not be fined for flouting lockdown rules over a soiree at their historic Kew mansion Raheen as the 12-month statute of limitations has expired, Victoria Police says.

Members of Victoria’s wealthiest clan flouted Victoria’s health orders last year when they hosted a dinner that was attended by up to a dozen guests who hid from police when they arrived at the property.

Video footage from the night of July 23, 2021, shows guests being ushered down a flight of stairs to the basement shortly after police came to make an inspection.

The officers entered a building known as “R2” that adjoins the heritage-listed Italianate mansion, where they found an empty round table set for at least 15 people.

In a statement, police said they were not provided nor made aware of CCTV of the alleged gathering at a Kew residence in July 2021.

“As the statute of limitations has expired, police cannot take any further action,” the statement says.

The statute of limitations in Victoria is 12 months for summary – or minor – offences.

A source with knowledge of the event, speaking on the condition of anonymity, said the dinner was hosted by matriarch Jeanne Pratt and billionaire scion Anthony Pratt and his immediate family, who live permanently at Raheen in separate compounds. Guests were mostly family who did not live at the estate.

More than 50,000 people were fined for disobeying Victoria’s strict COVID-19 public health orders throughout the pandemic.

The lockdown in question ran from July 16 to 27, when Victorians were confined to their homes following an outbreak of the Delta variant of COVID-19.

Those who breached the orders of the chief health officer faced fines of $1652, which were enforced by a special police taskforce. 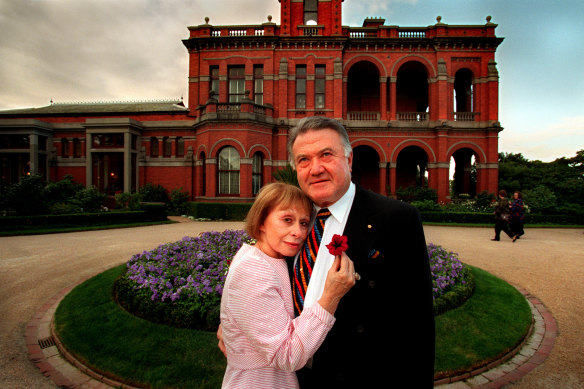 Jeanne and the late Richard Pratt out the front of their Melbourne mansion Raheen.Credit:Simon O’Dwyer

Under the conditions of the lockdown, all public and private gatherings were banned. Residents were only permitted to leave their homes to exercise, shop for food, perform authorised work, seek medical care and get vaccinated or tested.

The Pratt family dinner was held to mark Judaism’s day of rest, known as Shabbat, and was attended by up to a dozen guests of the powerful dynasty that has amassed an estimated fortune of almost $25 billion from its global packaging and recycling business.

According to the confidential source, guests were told by security staff that police could be waiting outside the main entrance on Studley Park Road. They were instructed to leave via a separate exit that was usually only used for deliveries and located near a former stable.

Representatives for Pratt and his mother did not respond to requests for comment from The Age.