Prince Andrew was swept into Windsor Castle last night as he prepares to meet his new grandchild for the first time with the legal row over whether he had sex with one of paedophile Jeffrey Epstein’s young slaves rumbling on today.

The Duke of York spent the summer at Balmoral with his mother the Queen and his ex-wife, Sarah, Duchess of York, despite the arrival of his first grandchild earlier this month.

Princess Beatrice gave birth to her first child on September 18 – but it appears he has waited until 12 days after she entered the world, arriving at his Royal Lodge home yesterday evening.

His arrival at Windsor came after he brazenly waved as he was pictured leaving Balmoral – just days after he officially recognised a sexual assault lawsuit served to him by Virginia Roberts.

The Duke of York, 61, had been hiding out at the Queen’s Scottish estate for three weeks to escape the legal row but was all smiles as he left Balmoral today.

The royal earlier acknowledged the lawsuit against him by Ms Roberts, who now uses the surname Giuffre, who claims Andrew abused her on multiple occasions in 2001 when she was under 18. His lawyer has called the allegations ‘baseless’ and he has always denied any wrongdoing.

The acknowledgment was confirmed in a joint agreement signed by a lawyer for Prince Andrew, approved by a Manhattan federal judge and entered into the public court record on Tuesday. 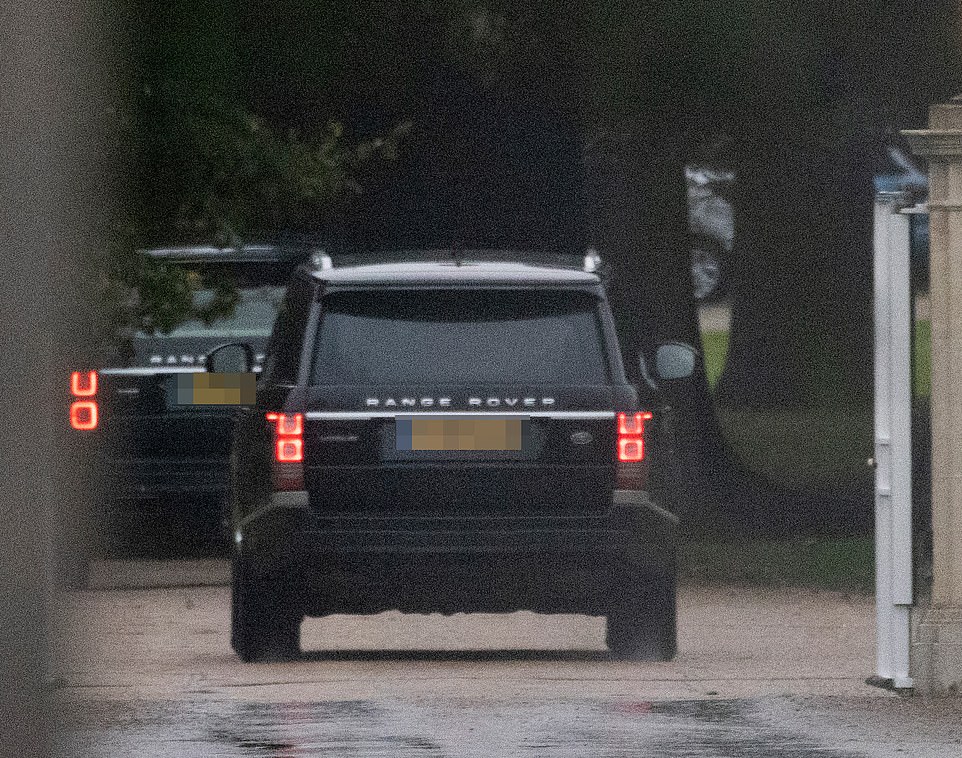 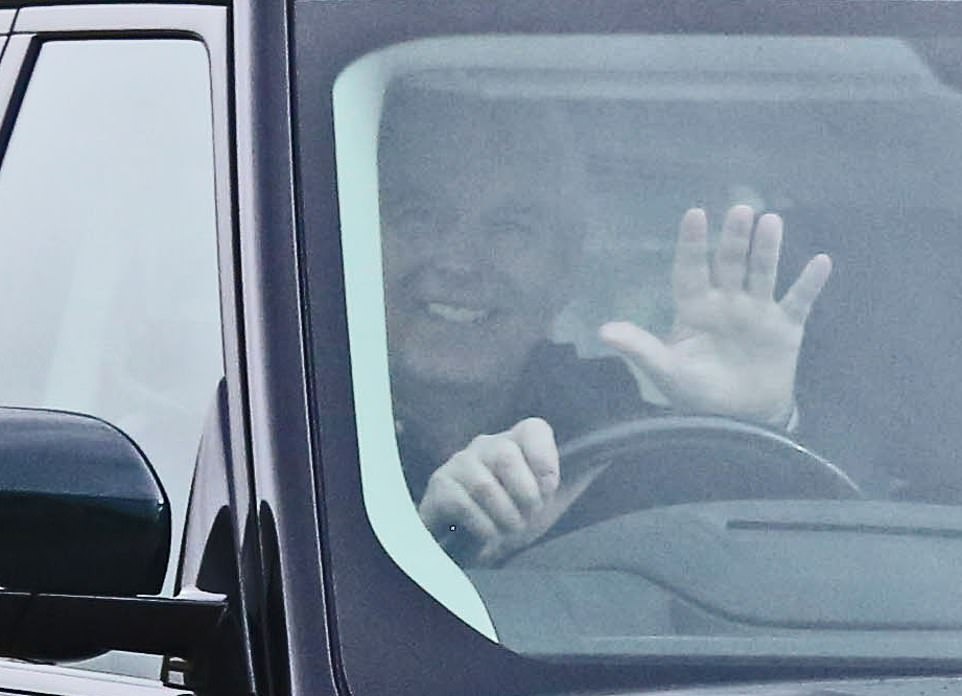 Prince Andrew, 61, was all smiles as he left Balmoral today, three weeks after fleeing to the Scottish estate 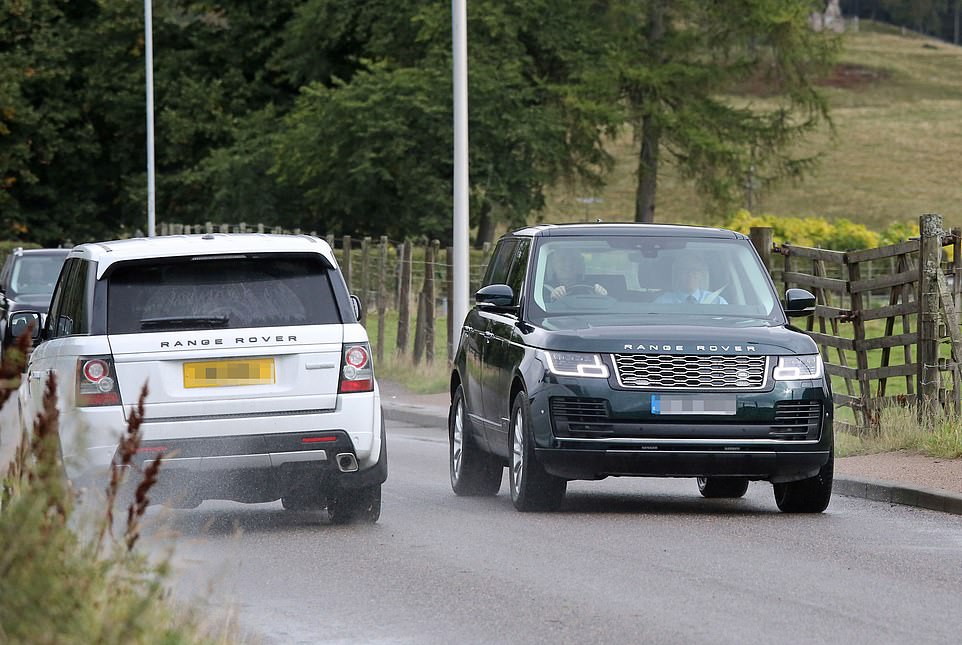 He was pictured leaving Balmoral just days after he officially recognised a sexual assault lawsuit served to him by Virgina Giuffre. 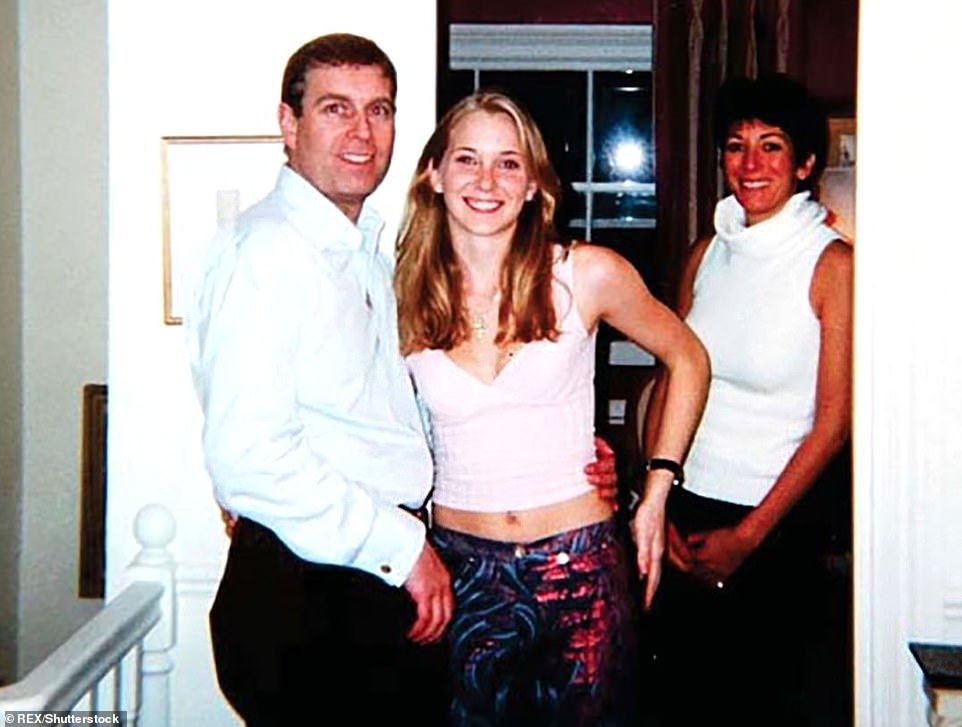 Pictured: The Duke of York with Virginia Roberts, then 17, and Ghislaine Maxwell in London

The court papers said Andrew had been challenging acceptance of the lawsuit until lawyers spoke by phone on September 21. An agreement was signed three days later, according to the order signed by Judge Lewis A. Kaplan.

MailOnline had previously reported that Andrew’s legal team accepted that he had been correctly served with legal papers by his sex accuser. This has now been entered in the official public record.

Ms Giuffre’s lawyer, David Boies, had previously said he expected the prince’s US lawyer, Andrew B Brettler, to apply for a ‘reasonable’ extension to respond to the complaint – and indicated they would likely agree to it.

The prince must now file responses to the lawsuit’s claims by October 29. A conference has been scheduled for November 3.

Delivering a lawsuit to a defendant is usually a routine matter but can be more complicated when a defendant resides outside the United States.

A judge must be satisfied that a defendant has been properly notified of the allegations and has a reasonable period of time to respond to them.

Lawyers for Giuffre had told the judge that they’d delivered the lawsuit to Andrew in numerous ways, though never directly into his hands.

At one point, Britain’s high court accepted a request from Giuffre’s lawyers to formally contact Andrew about the lawsuit.

Los Angeles attorney Andrew Brettler, who signed the papers on Andrew’s behalf acknowledging the prince was aware of the lawsuit, had argued at a hearing this month that Giuffre’s claim was ‘baseless, nonviable and potentially unlawful.’

In late 2019, Andrew told the BBC ‘Newsnight’ program that he never had sex with Giuffre, saying, ‘It didn’t happen.’

Brettler has said that Andrew cannot be sued because an earlier lawsuit in the United States that was settled ‘absolves our client from any and all liability.’ That 2009 settlement document, however, remains sealed. 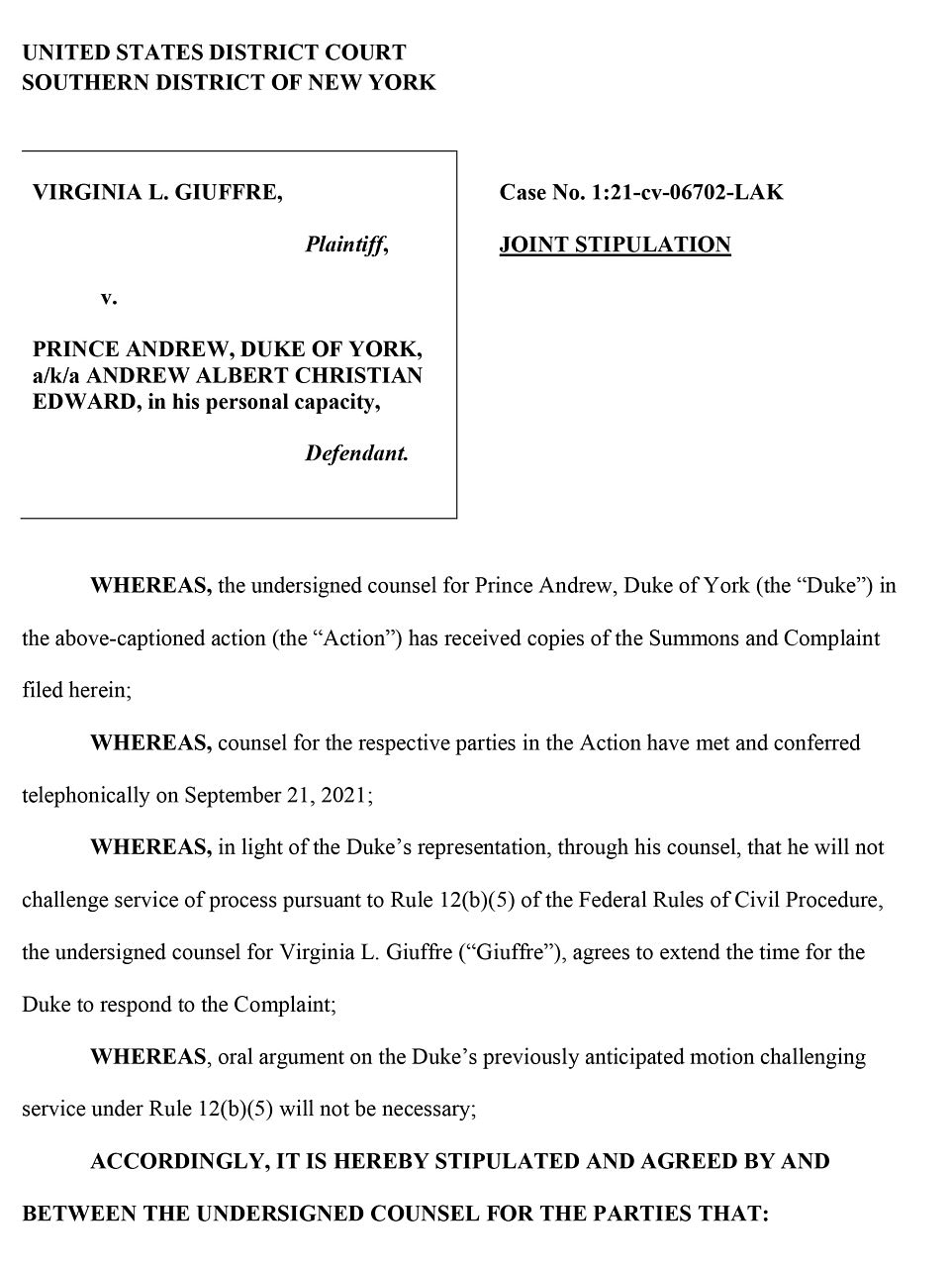 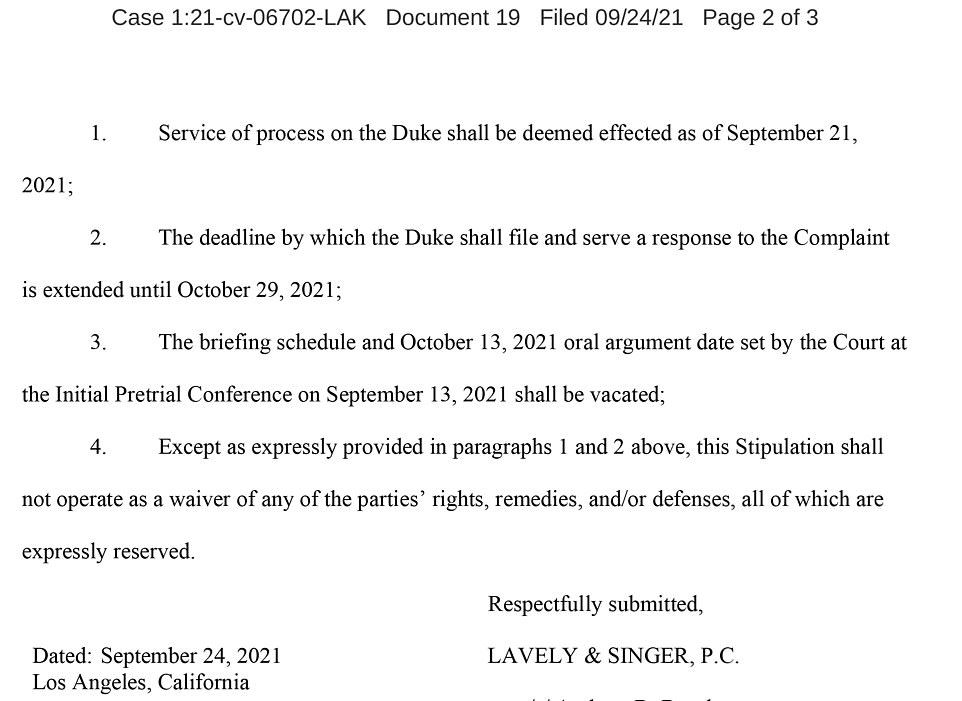 The court papers said Andrew had been challenging acceptance of the lawsuit until lawyers spoke by phone on September 21. An agreement was signed three days later, according to the order signed by Judge Lewis A. Kaplan

Ms Giuffre is suing the Queen’s son for allegedly sexually assaulting her on multiple occasions.

Ms Giuffre claims she was trafficked by Jeffrey Epstein to have sex with Andrew when she was aged 17 and a minor under US law.

Epstein was found dead in his cell at a Manhattan federal jail in August 2019 while he awaited a sex trafficking trial.

The death was ruled to be suicide.

Ms Giuffre is seeking unspecified damages, but there is speculation the sum could be in the millions of dollars.

Court documents show that lawyers for both sides spoke on September 21 and the time for the duke to respond was extended.

This latest point in the legal process is so a judge can be satisfied that proper notification of the allegations has been delivered to the defendant and they have enough time to respond.

In a previous legal hearing Mr Brettler said that Ms Giuffre had previously entered into a ‘settlement agreement’ with Epstein in 2009 that would nullify her case.

The 2009 settlement is currently sealed.