London: Prince Harry says his surprise visit to the Queen at Easter was to make sure she was protected and had “the right people around her”, in comments that have threatened to add to the growing rift within the royal family.

The Duke of Sussex and his wife, Meghan, dropped in to see his grandmother for a so-called olive branch meeting at Windsor Castle at the weekend in their first face-to-face meeting as a couple with the Queen in more than two years. 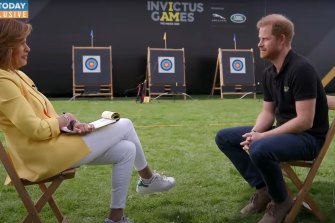 Prince Harry sat down for an interview in The Hague where the Invictus Games were held on the weekend. Credit:Television

The pair also briefly met with Prince Charles before flying to Holland for the Invictus Games for what is the couple’s first public appearance in Europe together since quitting royal duties.

Speaking to NBC’s Today show, Harry said: “Being with her, it was great. It was just so nice to see her, she’s on great form. She’s always got a great sense of humour with me, and I’m just making sure that she’s protected and got the right people around her.

“Both Meghan and I had tea with her, so it was really nice to catch up with her.”

He also used the interview in The Hague, in the Netherlands, to describe the United States as his home “for the time being” where he has been “welcomed with open arms”. 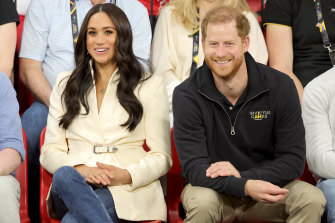 Prince Harry said he and Meghan had a cup of tea with the Queen who “has a great sense of humour”.Credit:Getty Images

Harry, 37, has a strained relationship with his father and brother, Prince William, since he left Britain. The differences came to a head when the couple accused the royals of racism during a tell-all interview with Oprah Winfrey last March.

He has also launched a High Court legal action against the Home Office claiming it is too dangerous to bring his family to the UK after he was stripped of his official Metropolitan Police protection.

The 37-year-old did not attend a memorial service for his grandfather, the Duke of Edinburgh, in London last month but the meeting with the Queen had paved the way for the couple to be invited to appear on the Buckingham Palace balcony during the Platinum Jubilee celebrations in June.

But veteran royal commentator Angela Levin, who wrote the book Harry: Conversations with the Prince, said his comment was a “gross insult” to Prince Charles and his brother, William.

“He’s underlined even more that he doesn’t deserve to attend the Jubilee celebrations and be on the Balcony,” she said.

Robert Jobson, of London’s Evening Standard, also questioned the motives behind his comments.

“I think you’ll find that Prince Charles and Her Majesty’s children and William are DOING just that and supporting the Queen, with actions – and not just words,” he tweeted.

The Queen, who is 96 on Thursday, has been forced to pull out of several key events in the past month, including a traditional Easter Sunday church service, after revealing she has mobility problems.