Pupils arriving in England from red-list countries will be allowed to self-isolate at their boarding schools rather than quarantine hotels, Department for Education confirms

International pupils arriving in England from red-list countries will be allowed to self-isolate at their boarding schools rather than quarantine hotels, the Department for Education has confirmed.

The move has been green-lit following pressure from parents and headteachers, but requires the children to have travelled straight from the airport in pre-arranged private transport organised by the school.

The students must then quarantine in ‘physically self-contained’ accommodation at the school.

In recent weeks, rules have stated how you cannot freely enter the UK if you’ve been in or through a country on the banned travel list in the last 10 days.

If you do enter, you must either quarantine where you’re staying or in a managed quarantine hotel for 10 days, with arrivals who lie about where they have been potentially facing a jail term of up to 10 years, or a £10,000 fine if they leave before the end of the self-isolation period.

Since last month, all international arrivals in quarantine must take a Covid test on or before day two of their isolation period and again on or after day eight.

However, the rules around students have now been eased after the Boarding Schools Association (BSA) wrote to the Government to warn that hotel quarantine arrangements pose ‘a significant safeguarding risk’. 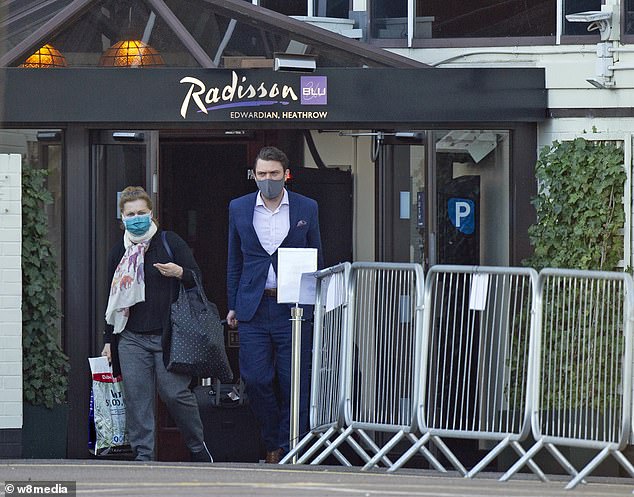 International pupils arriving in England from red-list countries will be allowed to self-isolate at their boarding schools rather than quarantine hotels (pictured at Heathrow Airpiort), the Department for Education has confirmed

Democratic Republic of the Congo

Portugal (including Madeira and the Azores)

The letter warned rules around self-isolation for travellers – which came into effect on February 15 – could lead to minors quarantining in hotel rooms alone, or with adults they do not know.

Last month, parents of children travelling back to school in the UK pleaded with the Government to rethink the rules.

The Government previously said parents should quarantine with their children in a hotel, and if pupils could not be accompanied by family then they were advised not to travel.

But DfE guidance, published just days before schools reopen in England, now says pupils can return directly to their boarding school if a series of conditions are met.

‘The Secretary of State has determined that in the case of boarding school students, the quarantine is to take place in accommodation that comprises of residential facilities organised by the school or college in England that the pupil or student (as the case may be) is due to attend as a pupil or student on their arrival in England.

Robin Fletcher, chief executive of the BSA, which represents 500 schools across the UK, said: ‘This is excellent news for our member schools and we’re grateful to the Department for Education for its support.

‘Boarding schools are self-contained bubbles – our experience of the previous lockdown tells us that any Covid cases can be managed carefully, limiting the risk of cases spreading to an absolute minimum.

‘It also means students are being cared for and supported by schools’ pastoral staff, ensuring their safety and wellbeing.

‘We hope the same arrangements can be put in place for students in Wales, Scotland and Northern Ireland and we will be continuing our efforts for this to happen.’

Independent Schools Council chief executive Julie Robinson added: ‘We are delighted that this guidance enables all international boarders to return to school if they are able to, and appreciate the strict conditions imposed on boarding houses to make it possible.’

It emerged earlier this week that international passengers touching down in the UK have had to wait nine days to receive a test they were supposed to have taken on day two of their 10-day quarantine.

Travellers arriving from countries that do not appear on the UK’s red list are required to purchase a £210 testing kit, which they use on day two and day eight of their isolation period.

Now several passengers have come forward to say that despite ordering the tests from Corporate Travel Management (CTM), they never arrived.

Numerous customers have complained that they have struggled to reach the provider as they try and chase their missing tests – as they risk a £2,000 fine.

Last week it was revealed that around 1,200 people are currently in a number of Government-approved quarantine hotels to prevent mutant variants of coronavirus from high-risk countries including Portugal from spreading around the UK.

MPs were told that more than 100 people a day are going into the hotels at London Heathrow Airport, where they must stay for 10 days at a cost of £1,750 for the accommodation on risk of criminal prosecution.

However, the Government has not yet released data on how many people have tested positive for coronavirus since going into a quarantine hotel, with ministers expected to publish an update in the coming weeks.