Locals of Carnarvon, about 10 hours’ drive north of Perth, watched on as parts of the historic One Mile Jetty were engulfed in water on Sunday afternoon after getting “hammered” by high tides. 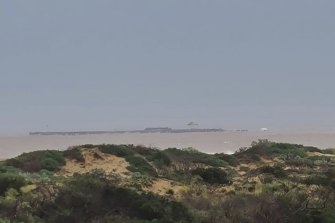 Ms Halden said while there were a few wind gusts and some heavy rain, she was lucky to be on the outside of the cyclone.

Residents in response to her post reflected, saying it was the “end of an era” with some having learnt to fish off the jetty as children.

The timber structure had stretched out over the mangroves and once provided a gateway to China, Singapore, and Indonesia, allowing the exporting of wool, sandalwood, and pearls.

The jetty had been closed to the public due to disrepair since 2017.

The site is run by the Carnarvon Heritage Group and its chairman, Nationals MP Vince Catania, had hoped to revitalise the jetty precinct and applied to state and federal governments for funding.

The Department of Fire and Emergency Services warns Seroja is moving fast, and weather conditions will deteriorate rapidly.

Heavy to intense rainfall and flash flooding are likely close to the track during Sunday and Monday.

People near the town of Denham in the Shark Bay area, halfway up the coast, may experience destructive winds for a period after 3pm WST.

People near Kalbarri may see gales as early as 4pm WST and are likely to experience destructive winds from 7pm.

People near Geraldton may see gales as early as 6pm WST and are likely to experience a brief period of destructive winds around 9pm. If the track shifts a little south from the current forecast, Geraldton will experience a longer period of more intense winds.

Abnormally high tides could cause minor flooding at the coast between Coral Bay and Lancelin, increasing to serious flooding in the Denham and Shark Bay region and near Kalbarri. Dangerous surf and beach erosion is expected between Denham and Geraldton.

Residents of the West Australian coastal tourist region of Shark Bay have raced to secure boats, sandbag homes and safeguard the local IGA as a tropical cyclone accelerates towards them.

The local State Emergency Service had been working for days and more SES volunteers had poured into town from other areas ahead of Cyclone Seroja, Shark Bay resident Leon Deschamps said.

“Volunteers have been making a Great Wall of China of sandbags for our main supply of food, the supermarket,” he said. 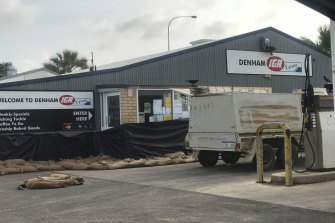 Locals are trying to protect the local IGA.

“And it’s tourism season so thousands more are in the community and haven’t left.

“Michael, the owner at the kayak place, for the first time in 20 years has been sandbagging, not to stop the water coming in, but to stop the building floating away. The kayaks are lashed together in one giant mass as high as he can physically drag them.”

Boat owners had been playing “mooring Bingo” with everyone moving to the strongest mooring they could find, he said.

Welcome to our live blog as Seroja, a Severe Category 3 cyclone, bears down

Welcome to our live blog where we will keep you up to date as tropical cyclone Seroja, which is classified now as a Severe Category 3 cyclone, accelerates towards the Western Australian coast and makes landfall.

Seroja is likely to be travelling at around 50 kilometres per hour as it crosses the coast, with significant impacts expected to extend well inland through to Wheat Belt communities during Sunday night.

Authorities say it is likely to weaken to Category 2 prior to crossing the coast, though a Severe Category 3 impact remains a slight risk.

Gales with gusts to 100 kilometres per hour are likely to develop in an area between Minilya Roadhouse and Kalbarri during Sunday afternoon and then extend inland into the southern Gascoyne and northern Wheatbelt overnight.

Winds up to 150 kilometres per hour are forecast to occur close to the centre of Seroja. 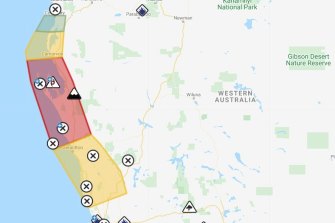 The alert zone as Seroja moves fast towards the coast. Credit:DFES

The most likely area to experience destructive wind gusts is along the coast from Denham to Geraldton.

Towns in this area very rarely experience wind gusts this strong and there are concerns that because houses have not been built to withstand cyclones as they are farther north, the extremely unusual weather for these areas could bring “widespread devastation”.