Residents are fired up about council plans to remove a landmark “rocket” from a Hawthorn playground, with one likening its significance to the neon-lit Skipping Girl sign in Abbotsford.

A “save the rocket” petition has taken off, with over 2800 people pleading with the council to retain the quirky seven-metre high climbing apparatus that is believed to be over 50 years old. 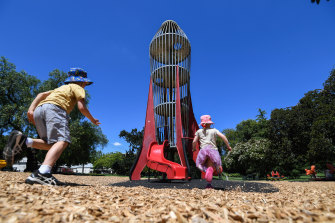 Magnet for kids: Henry and Zoe Gannon shoot towards the rocket play tower in Central Gardens, Hawthorn on Wednesday.Credit:Joe Armao

Hawthorn resident Simon Gannon, who started the petition, said the rocket was “iconic in the local area and unique, as I understand it, in Melbourne”.

Shirley Grubert-Gardiner, who signed the petition, said four generations of her family had played there.

Sabina Reynolds wondered why the removal was being considered: “This is up there with the Skipping Girl sign for a generation. And put up what? Some plastic rubbish? Do not remove this, please.”

Mr Gannon said his children, Henry, 6, and Eloise, 3, play almost daily on the rocket, which has four levels and a slide.

He said a common reaction among children seeing the rocket for the first time was “awe and excitement”.

“They want to run there as fast as they can and climb up it.”

The City of Boroondara had announced on its website in recent weeks that the playground at Central Gardens – known locally as Rocket Park — was scheduled to be removed and rebuilt as part of a playground replacement program.

However, following the community outcry, City of Boroondara director of places and spaces Daniel Freer said in a statement that keeping the rocket had been added to the options for the playground redesign. 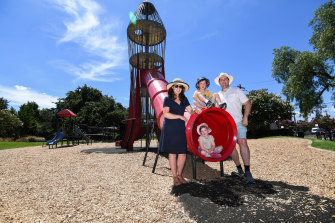 “At this point, we can legitimately say that council is giving serious consideration to keeping the existing rocket at Central Gardens, but this rocket will require some modifications to meet current national safety and compliance standards,” Mr Freer said.

The council’s website is seeking feedback on how to “acknowledge” the rocket, but refers to “a rocket” not “the rocket” and how to “keep a rocket ship and/or space theme as a fundamental element of the new playground design”. 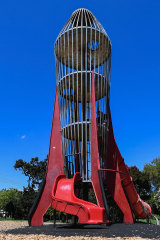 Mr Gannon fears if a replica rocket was installed, it would be shorter, blander and made of plastic. The current steel one has a “special quality”, he said.

He said its current height allowed children to safely test their limits, “and bit by bit they gain in confidence”.

Mr Gannon believes the rocket is one of dozens of similar rockets installed in playgrounds across Australia in the 1960s, inspired by the space race.

His petition claims that council plans to “tear down” the rocket “and replace it with something much less fun”.

Longtime Hawthorn resident Kevin Slattery, 80, in commenting on the petition, said the rocket was “extraordinarily popular and [it] would be a travesty to remove it.”

Sarah Frankpitt, 51, of Canterbury, who also signed the appeal, told The Age she “couldn’t believe they were thinking of getting rid of it”.

She had “great memories” of climbing the rocket as a teenager in the mid-1980 and her own two daughters played there in the 2000s, too.

She said climbers of the rocket got a thrill from being up fairly high, but it was “completely safe”.

“If it isn’t broken it doesn’t need to be fixed,” Ms Frankpitt said.

Hawthorn Historical Society secretary Elizabeth Yewers said the rocket was “a historical part of Hawthorn and should be preserved in some form”, even if was moved and no longer used as play equipment.

The public have until February 21 to make submissions on the design of the new playground.