Rishi Sunak was likened to Robin Hood today as he poured money into the pockets of Britain’s poor and elderly struggling with the cost-of-living crisis.

Unveiling a £15billion package centred on a windfall tax on energy giants the Chancellor revealed two payments totalling £650 for more than eight million families on benefits, worth £5.4billion.

Additionally he announced a £300 payment to pensioner households worth £2.5billion, and a £150 payment to people on disability benefits.

But he also made long-term commitments to increase both universal credit and pensions in line with soaring inflation, which is expected to hit 10 per cent this year.

Mr Sunak told MPs that, subject to a review by the Work and Pensions Secretary Therese Coffey,  benefits will be uprated by this September’s Consumer Prices Index (CPI) rate, noting: ‘On current forecasts it’s likely to be significantly higher than the forecast inflation rate for next year’.

He also confirmed a similar increase in the state pension, with the ‘triple lock’ remaining in place.

After the announcement in the Commons, IFS director Paul Johnson tweeted: ‘In conjunction with tax rises already in place this is hugely redistributive – taking from high earners and giving to the poor.’ 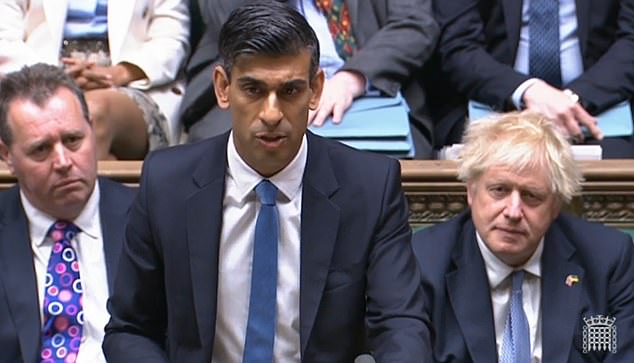 Unveiling a £15billion package centred on a windfall tax on energy giants the Chancellor revealed two payments totalling £650 for more than eight million families on benefits, worth £5.4billion. 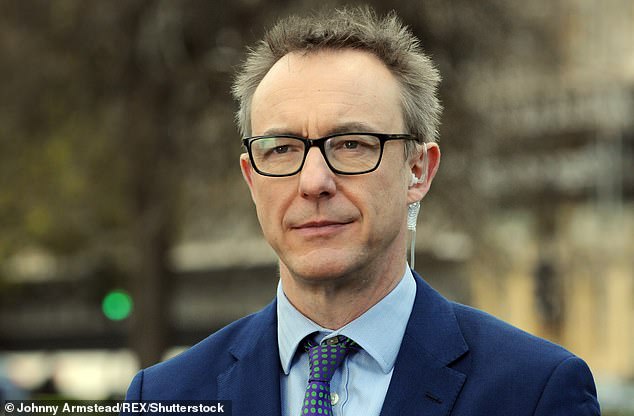 After the announcement in the Commons, IFS director Paul Johnson tweeted: ‘In conjunction with tax rises already in place this is hugely redistributive – taking from high earners and giving to the poor.’

‘Promise to increase benefits and pensions by September inflation next April. Likely to be 10 per cent or more. As expected. Big cash increase in spending.’

Under the terms of the triple lock, which was a Conservative manifesto commitment, the state pension rises each year in line with whichever is highest out of 2.5 per cent, average wage growth, or CPI inflation for the year to September.

The package would mean that almost all of the eight million most vulnerable households would receive at least £1,200 of support, including a £150 council tax rebate which has already been announced.

A further £500 million will be allocated to the fund administered by councils to help households facing extra hardship.

The Chancellor announced a new package of help for struggling families after watchdogs warned that the Ukraine crisis means energy costs are set to soar again this Autumn – by more than 40 per cent.

He confirmed that the government is performing an extraordinary U-turn on imposing a 25 per cent windfall tax on the surging profits of oil and gas firms, following weeks of wrangling in Cabinet.

But denying he had caved into Labour demands he said the levy – which should raise £5billion – will be ‘temporary’ and there will be big tax breaks for companies that invest.

The Chancellor told MPs that the Government’s cost-of-living support measures were ‘more generous’ than those called for by Labour.

Responding to Rachel Reeves, Rishi Sunak said ‘concrete information’ on the autumn and winter energy price cap had allowed the Government to better ‘design and scale’ its policies.

Mr Sunak added: ‘That is why, because we were patient, we have been able to scale our support for the problem, which means our proposals are in fact more generous than those offered by the party opposite.’

Mr Sunak also disagreed with Labour’s calls to cut VAT on energy bills, telling MPs: ‘VAT is worth on average about £140 of support, our policy universally to all households in this country is worth £400.

‘That is the reason not to do VAT. What we are doing is far more generous.’

Ms Reeves said: ‘Every day for five months, the Prime Minister sent Conservative MPs out to attack the windfall tax and yet defends an increase in taxes on working people.

‘He has made them vote against it not once, not twice, but three times – and for months he has sent his MPs to defend the litany of rule-breaking in Number 10 Downing Street set out in the Sue Gray report yesterday.

‘There is a lesson here for Conservative MPs – you can’t believe a word that this Prime Minister says.’

She added: ‘Labour called for a windfall tax because it is the right thing to do.

‘The Conservatives are doing it because they needed a new headline.’

Paul Kissack, chief executive of the Joseph Rowntree Foundation, said: ‘For people living with worry and fear through this cost of living crisis, and especially for those going without essentials, today’s statement will offer very welcome relief.

‘It is right to target help at those on low incomes, who are least able to bear the shock of soaring energy bills.

‘We are pleased by the commitment to uprate benefits in line with inflation as usual, though it is still crucial that the government invests on an ongoing basis in ensuring that everyone can get through difficult times and afford the essentials.

‘The measures announced today suggest that the Chancellor has recognised and taken action on an immediate need, and we hope to work with him to strengthen the social security system in the long term so that fewer people approach the brink when times are hard’.