Masked robbers are jailed for 10 years each after tying terrified pensioner, 72, to the stairs of her £1m mansion before making off with Cartier ring, pearl necklace and Military Cross in £215,000 cash and jewellery raid

Two masked robbers have been jailed for 10 years after tying a petrified pensioner to the stairs of her £1million home and looting £215,000 of cash and jewellery.

Eriks Valants and Jed Martin lashed 72-year-old Susan Hunt to the bannister, bound her hands with black tape and put a pillowcase over her head during their raid.

Thinking Ms Hunt would be languishing inside the six-bedroom property in Stockbridge, Hants, for hours, they left her water, fruit and a yoghurt.

But the pensioner managed to chew through the tape and call the police, who raced to the home.

Valants, 23, and Martin, 27, both of Southampton, pleaded guilty to carrying out the robbery in March last year. 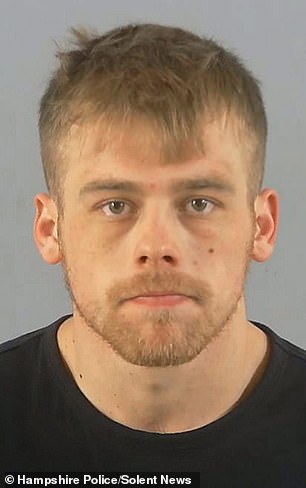 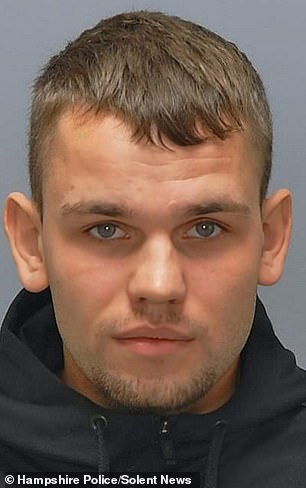 Eriks Valants (right) and Jed Martin (left) lashed 72-year-old Susan Hunt to the bannister, bound her hands with black tape and put a pillowcase over her head during their raid.

Prosecutors said that Ms Hunt had been left terrified to be in her own home after the break-in.

Winchester Crown Court heard how the pensioner was awoken by Valants and Martin shining a torch in her face and demanding she reveal the code to her safe.

They made off with a Cartier ring, an Omega watch, a three-string pearl necklace and a David Morris pearl and diamond necklace with matching earrings worth £215,000.

None of the items were recovered, including the precious medal and letter from the King.

Andrew Houston, prosecuting, told the court Mrs Hunt said it ‘felt like hours’ they were in her home, which left her feeling ‘traumatised, disoriented and scared,’ and ‘terribly frightened that people were going to come back.’

He added: ‘There was a slight piece of compassion – they asked how long it would be until anyone came, telling her you can live on water for three days [adding] “I can’t be unkind, I have to do this”.’

On the night of the break-in they had made four attempts to get into the detached house, which has a swimming pool, and when police arrived they found a knife that had been left outside the property.

In mitigation, Peter Asteris said that Valants had ‘significant remorse’ for what he has done.

He added that Valants was in trouble with some dangerous people and that ‘he is horrified with what he allowed himself to become involved with on that night.’

Representing Martin, Tessa Shroff said his life had been ‘spiralling’ for a long time and he carried out the robbery ‘under pressure to repay a debt.’

She told the court he wished to ‘express remorse and express sympathy for the impact on her (Mrs Hunt),’ and since being in prison has sought counselling following a troubled childhood.