Former special forces soldier Ben Roberts-Smith has told a court that he hired a private investigator to follow a woman with whom he had been having a relationship to check whether she had an abortion because he suspected she was lying about being pregnant.

Mr Roberts-Smith, Australia’s most decorated soldier, is suing The Age and The Sydney Morning Herald for defamation over stories in 2018 that he says accuse him of being a war criminal and of punching a woman, with whom he was having an extramarital affair, in the face after a dinner in Canberra on March 28 that year. 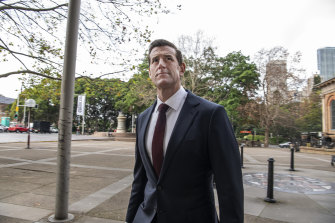 Ben Roberts-Smith outside the Federal Court in Sydney on Tuesday.Credit:Louise Kennerley

Giving evidence in the Federal Court in Sydney on Tuesday, Mr Roberts-Smith replied “absolutely not” when asked by his barrister, Bruce McClintock, SC, if he had hit the woman.

“That particular allegation, I feel, coupled with being a war criminal, ruined my life,” he said. “For a long time, I found it very difficult to leave the house after that.”

He said domestic violence was “highly reprehensible” and his parents had brought him up with a “very good set of values”. He had no tolerance for anybody who would raise a hand to a woman, he said.

The woman, known as Person 17 to protect her identity, had been “extremely intoxicated” after a dinner at Parliament House in Canberra, the former Special Air Services soldier said, and had fallen down a flight of stairs.

He said he iced the resultant bump on her head after putting her to bed in their room at the Hotel Realm.

The woman subsequently texted Mr Roberts-Smith that her husband “didn’t believe that I had fallen down stairs” but added that her other bruises would “hopefully make the falling story more believable”.

Mr Roberts-Smith told the court that the events in Canberra had been “highly embarrassing for her and I” and they had discussed how she would explain her injury because she hadn’t told her husband that they were together at the time.

Mr Roberts-Smith said he had separated from his now ex-wife, Emma Roberts, in late September 2017 and they remained separated for about six months.

He attempted to end the relationship with Person 17 after he went on a trip with his family to Singapore in early 2018, he said, but he had concerns from messages she sent him from London that she was “potentially going to self harm”.

Later, in February that year, the woman told him she was pregnant. He said they agreed to terminate the pregnancy, but he suspected it was not real.

Mr Roberts-Smith told the court he hired a private investigator to check if the woman attended a hospital in Brisbane for a termination. He believed video footage of her leaving the hospital confirmed that she had not had a termination because she was able to pick up her own bag, was “dressed nicely”, and did not appear to have had an “invasive procedure”.

He said that he showed Person 17 the footage later that day, and she admitted she had not had the procedure but said she did have a termination at an earlier date in Townsville. He said she subsequently told him she had had a miscarriage, meaning that she had provided “three stories” about what had happened.

Mr Roberts-Smith said he believed he was being “manipulated so that I would stay in the relationship”.

“You continued with the relationship after this, didn’t you?” Mr McClintock asked.

“I did,” Mr Roberts-Smith replied.

The court heard the relationship ended in April 2018 and the pair had met at an airport when Mr Roberts-Smith was about to catch a flight to Canberra. He believed Person 17 had “come to the airport to ensure I boarded the plane”, and then drove to his matrimonial home.

“I landed in Canberra and received a message from my wife that Person 17 was there,” he said.