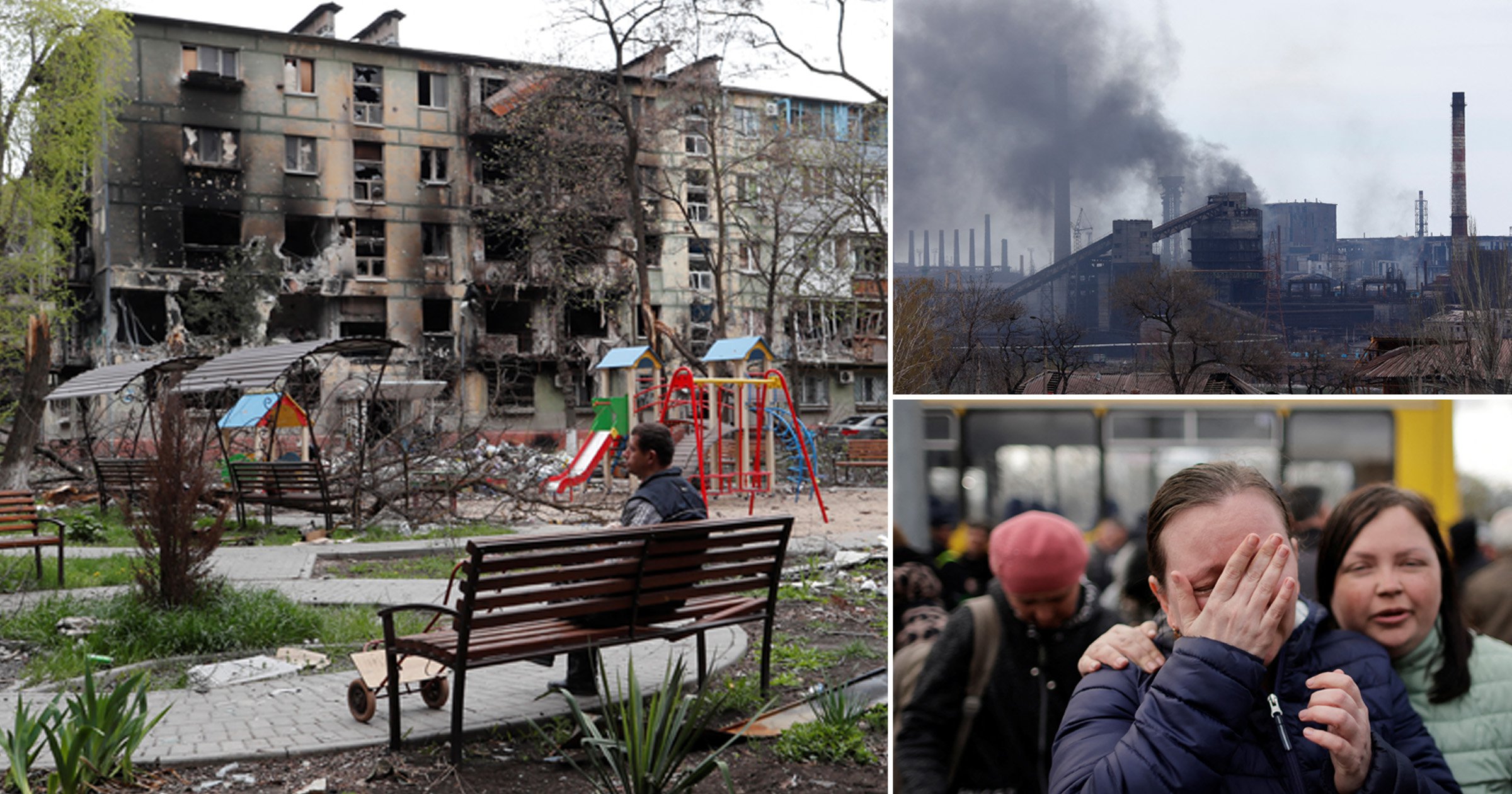 Russian forces have been accused of hiding bodies as the Kremlin makes preparations to proclaim a breakthrough on May 9.

The mayor of Mariupol claimed corpses of civilians are being driven 12 miles out of the ravaged city and left in mass graves.

With his soldiers largely in control of the area, Vladimir Putin has declared victory after a long battle for the port city.

Some Ukrainian troops have ignored Russian ultimatums to surrender or die and are still inside a giant steel plant in the city.

Volodymyr Zelensky has called for special negotiations to allow them to leave, along with around 1,000 civilians sheltering with them.

The White House has cast doubt on the Kremlin’s claim that they are fully in control of Mariupol despite Mr Putin’s televised claims.

State Department spokesman Ned Price told a news briefing that ‘Ukraine’s forces continue to hold their ground’ and called the president’s comments a ‘show for the media…yet more disinformation from their well-worn playbook’.

The Ministry of Defence today agreed with assessments that the Russian president is pushing for gains by Victory Day to spin at home as major successes.

A huge military parade is held in Moscow on May 9 every year to mark the anniversary of Nazi Germany’s surrender and rehearsals are already under way for what will be a particularly symbolic event this year.

With less than three weeks to go and Russian attempts to force further breakthroughs in the east failing to make significant breakthroughs, Mariupol may yet be all Mr Putin has to point to when he appears in Red Square.

Thousands of civilians have been killed after weeks of shelling and much of the town has been reduced to rubble.

It was previously reported that Kostyantyn Ivashchenko, a pro-Russian politician who has been installed as the city’s new puppet mayor, had been ordered to clear the streets of bodies and debris by Victory Day for a parade.

The latest MoD assessment of the conflict read: ‘Russia likely desires to demonstrate significant successes ahead of their annual 9th May Victory Day celebrations.

‘This could affect how quickly and forcefully they attempt to conduct operations in the run-up to this date.’

Comments today from the legitimate mayor of the city Vadym Boychenko, accusing Russia of covering up ‘military crimes’ in the city, would seem to support this analysis.

He said ‘the bodies started disappearing from the streets of the city’, claiming that the Russians were ‘hiding the trace of their crimes and using mass graves as one of the instruments for that’.

Mr Boychenko said the Russians dug huge trenches near Manhush, about 12 miles west of Mariupol, and are using them to bury the dead.

Satellite imagery captured by a private US company said it had seen evidence of 200 new graves at the site, with fresh digging beginning almost a month ago.

Maxar Technologies said a review of images from mid-March through mid-April indicates the expansion began between March 23-26.