Colour photos of a lost Russia: Fascinating century-old images taken by the Tsar’s photographer show workmen building railways and nomads living in yurts in the final days of the Russian empire

These captivating century-old photographs show Russia in colour in the last days of the old Tsarist empire which was soon to vanish in the fire and fury of the Russian Revolution.

Taken in the early 20th century, the pictures were the work of Sergey Prokudin-Gorsky, a chemist who pioneered a method of producing colour photographs and was commissioned to document the empire for Tsar Nicholas II.

But the collection would soon take on a more poignant significance as one of the last testimonies to the old imperial Russia before the traumas of Stalinist terror and Nazi invasion that scarred the following decades.

His photos include glimpses of traditional life in remote corners of the empire, with portraits of nomadic people dressed in extravagant headgear sitting in their sturdy yurts and carrying grain and cotton on their camels.

But there are also signs of modernity, with new railways stretching out from Moscow and St Petersburg across the continent as Russia sought to catch up to its industrialised rival powers.

As Tsarist Russia was torn to shreds by the revolutions of 1917 and the emperor and his family were brutally murdered, Prokudin-Gorsky himself would flee to Norway and Britain before finally landing in France. His collection found its way to the US Library of Congress, which now has 2,607 of the fascinating images. 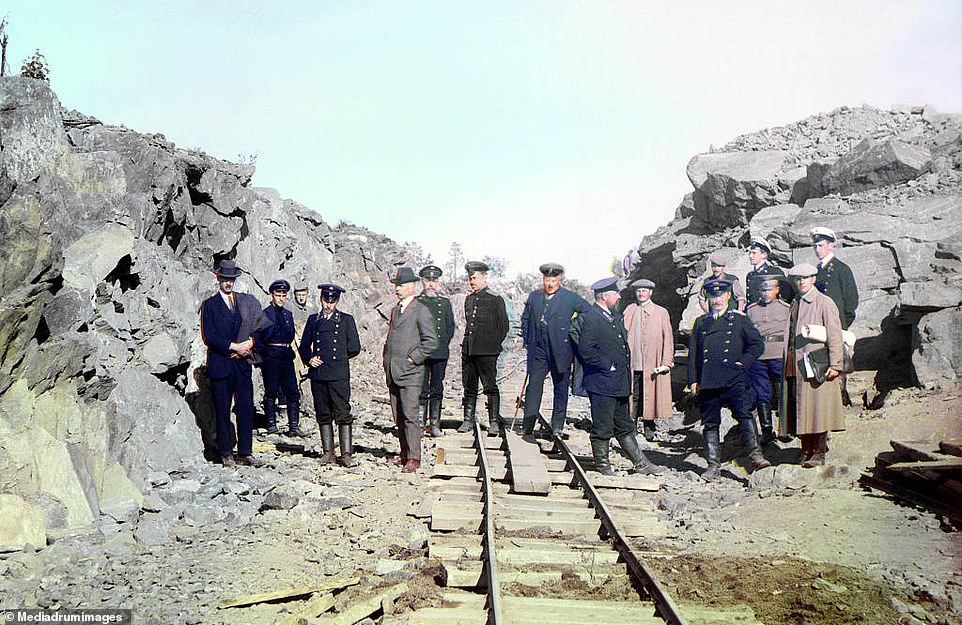 Building a railway: This group of men wearing hats, buttoned jackets and overcoats were involved in the construction of a narrow-gauge railway in the far north of Russia, leading from the town of Kem to the port village of Kem-Pristan, now known as Rabocheostrovsk. The building of the railways helped to industrialise Russia’s economy after its defeat in the mid-19th century Crimean War had exposed the country’s shortcomings compared to the rapidly modernising powers of Western Europe such as Britain and France. Russia’s rapid railway-building also alarmed its rival powers in the lead-up to World War I 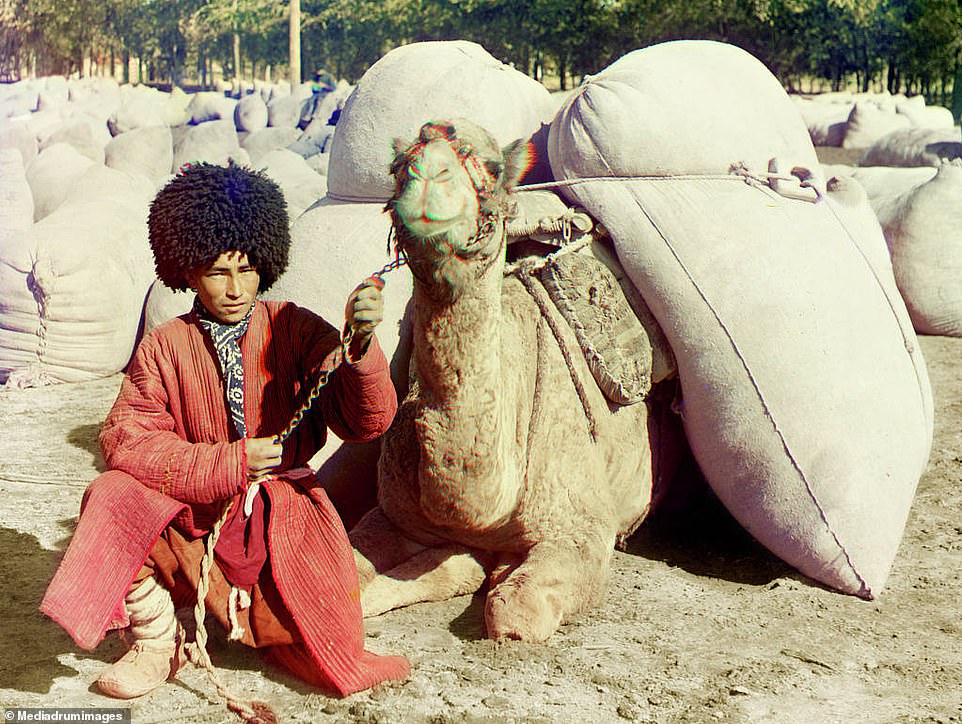 Camel transport: This picture shows a Turkmen man and his camel, who is likely destined to travel in a so-called camel caravan transporting sacks of grain or cotton around Central Asia. This traditional means of transporting food, water and other goods remained widely used even once railways started to stretch across Russia’s vast empire. The region has been inhabited by ethnic Turkmens for centuries but there was little political unity until Tsarist Russia annexed the area in 1881. Turkmenistan would remain under Moscow’s rule until the break-up of the Soviet Union led to its independence in 1991 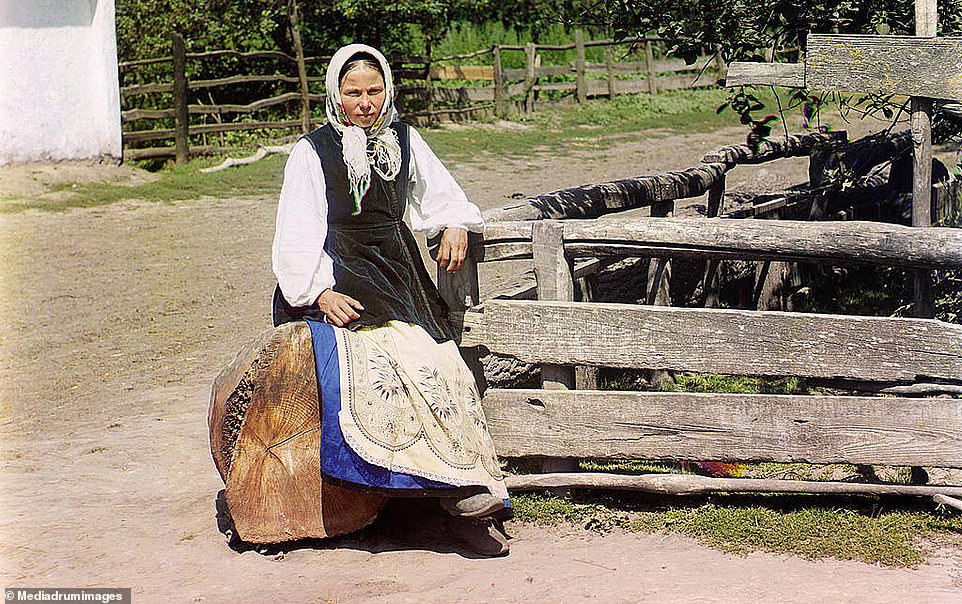 ‘Little Russia’: This woman is sitting on a wooden seat in what is now Ukraine, and likely lived as a peasant who raised cattle or grew crops such as rye, wheat, oats, and barley in the farmland of Eastern Europe. Over the centuries parts of Ukraine found themselves at various times living under the rule of Russian rulers or the Habsburg emperors who reigned from Vienna, but by the 19th century Moscow was seeking to tighten its control by banning the imports of Ukrainian-language books. Russia referred to the area under its control as Little Russia, a term which has more recently been adopted by pro-Russian dissenters 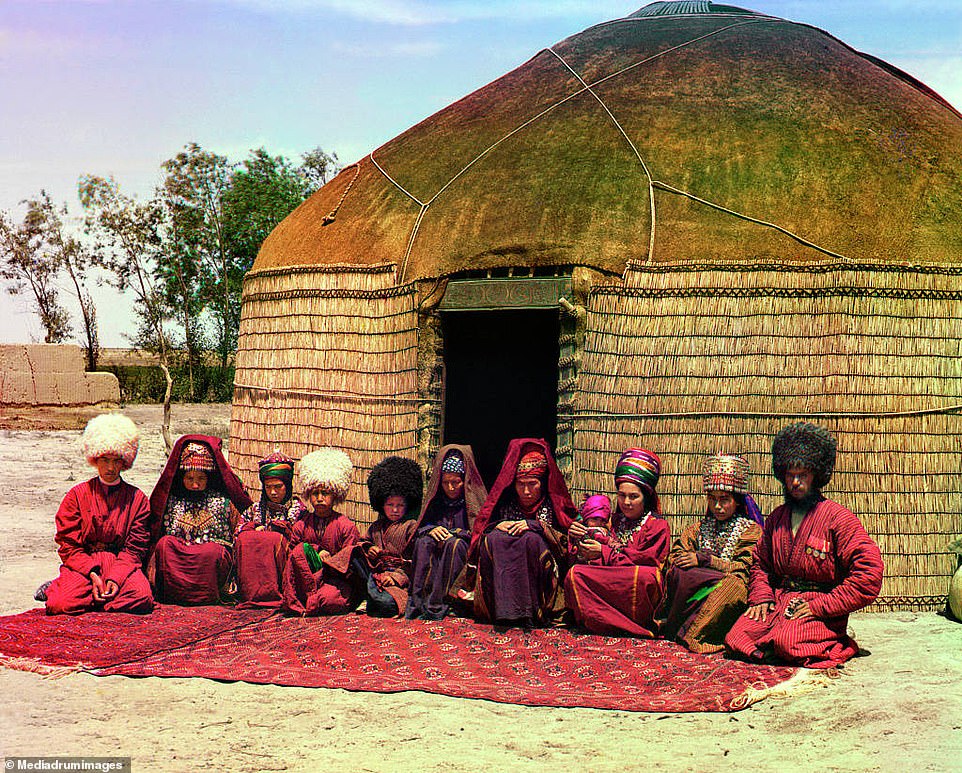 Sitting outdoors: A group of eleven adults and children wearing colourful outfits with extravagant headwear sit on a rug outside their yurt, likely in what is now one of the Central Asian republics including Uzbekistan and Turkmenistan. As nomadic peoples such as these came into the orbit of Tsarist Russia, they came under pressure to abandon their portable yurts in favour of a more settled lifestyle in towns and cities. Those struggles for control would continue into the Soviet era, which saw a famine in Kazakhstan during the early 1930s that laid waste to traditional nomadic communities 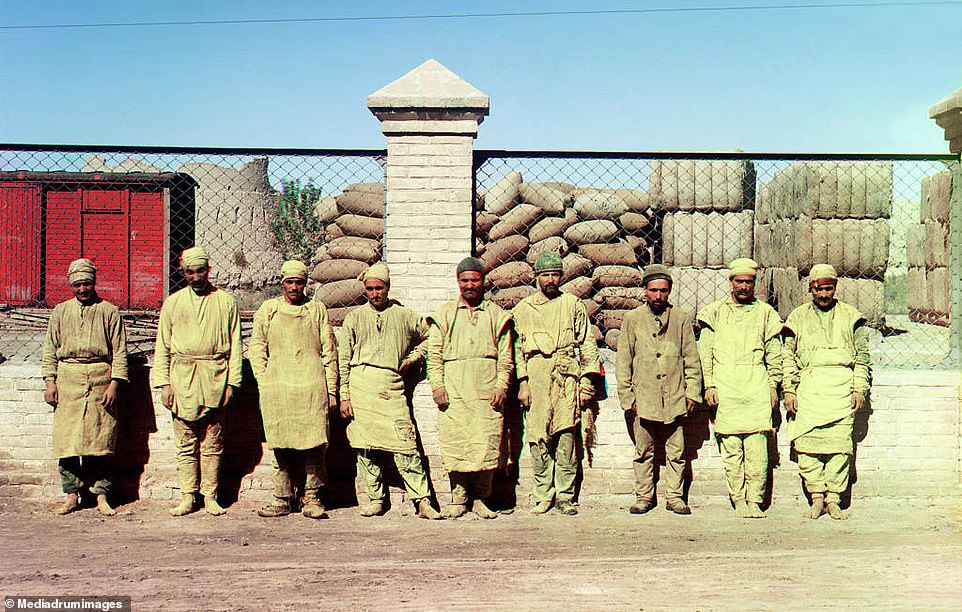 At work: A group of labourers wearing khaki uniforms stand in front of a chain-link fence, with sacks and bales piled up behind them. Also beyond the fence, behind the red structure on the left, are the remains of an old brick fortification built near Bayramaly in what is now Turkmenistan, in the Central Asian region where much of the empire’s cotton came from. The are thought to contain cotton seed cake, which is the solid substance left over and often fed to animals after oil is extracted 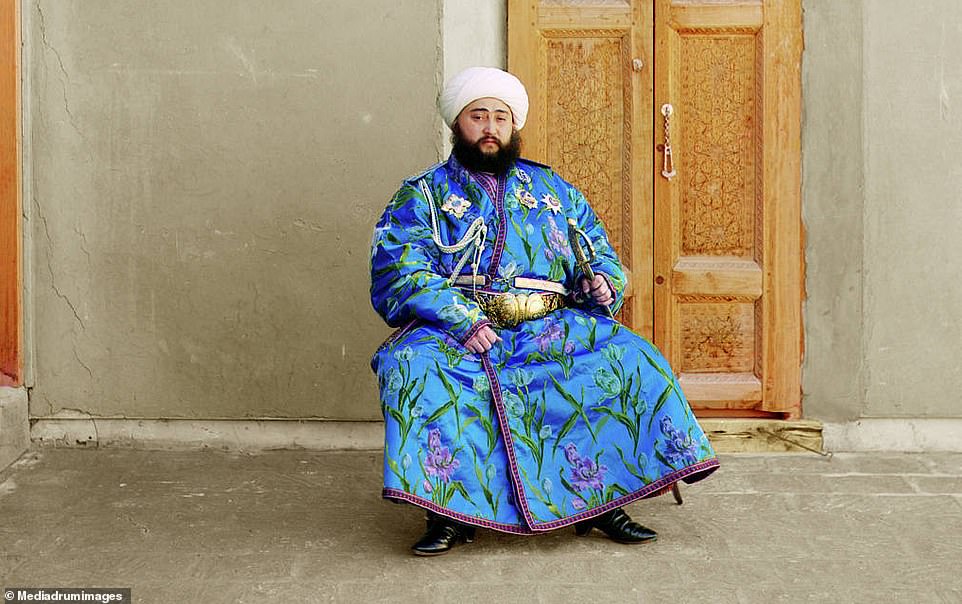 Ruler: The bearded emir of Bukhara, Alim Khan, poses for a portrait wearing a vivid ocean-blue cloak, a turban and high-heeled shoes while holding a sword in his hand. The portrait was taken in 1911 shortly after the Emir came to power in the city-state, now in Uzbekistan, where he reigned as an absolute monarch until Soviet forces took control of the emirate in 1920. While the Emir fled to Afghanistan, where he died in 1944, there was further turmoil in Bukhara as it was first established as its own Soviet republic before subsequently becoming part of the Uzbek republic that would eventually achieve independence 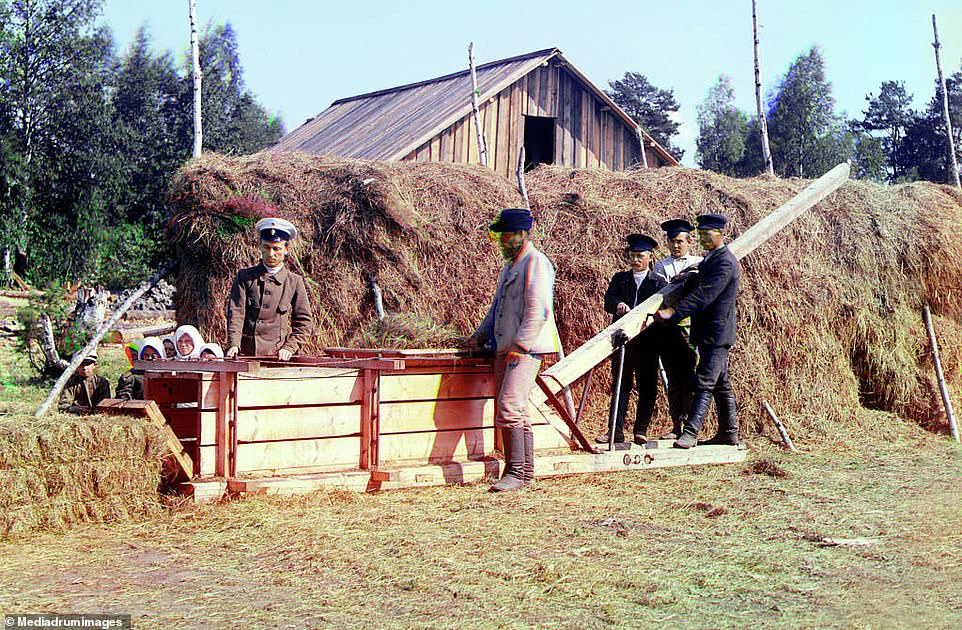 Baling machine: This picture was taken near Kondopoga along the route of the Murmansk Railroad, which was built in Russia’s far north between 1914 and 1917 – likely making this one of the pictures taken by Prokudin-Gorsky during World War I. In this area, relatively close to the border with Finland, a wooden machine had been set up for stacking hay into bales. Three men in caps are poised to operate it while a bearded man wearing a hat and another man in a military-like uniform supervise the operation. Behind the machine are a group of village children, including girls covering their heads in white scarves 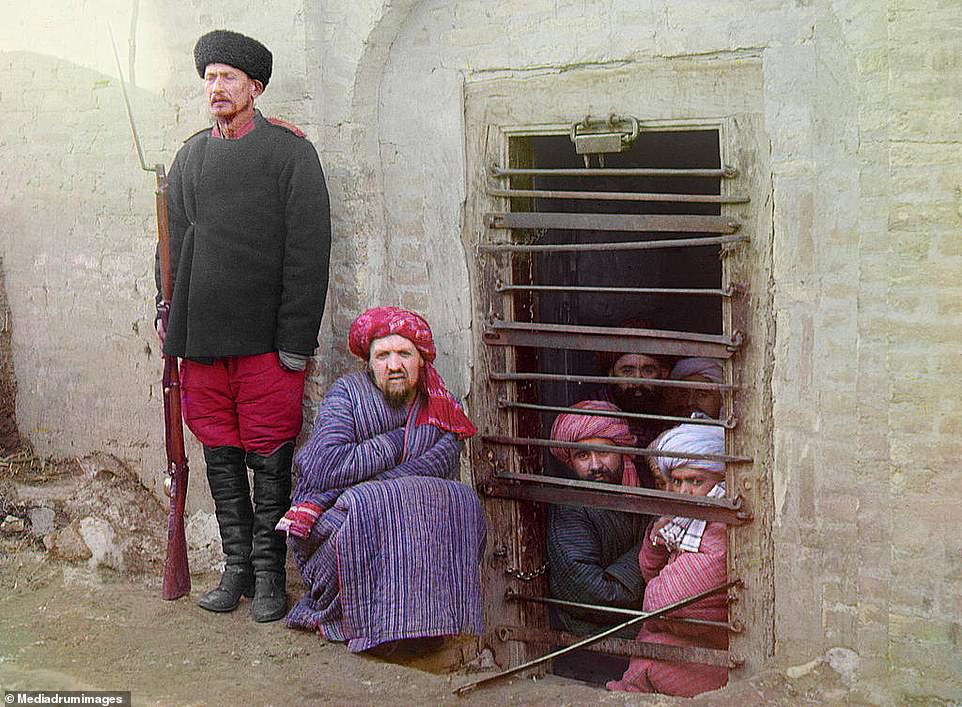 Prison cell: In this picture, a visitor appears to be squatting at the entrance of a prison cell while the inmates look out from behind their primitive bars. There are remnants of snow and ice by the walls and the men are huddled up in warm clothing, while the guard is carrying a rifle and wearing a Russian-style uniform with a sheepskin hat and padded tunic. The prison is known as a ‘zindan’, a term derived from Persian, and is thought to have taken in Bukhara – see above – in what is now Uzbekistan. People might have been locked up for failing to repay their debts, or sometimes kept in solitary confinement 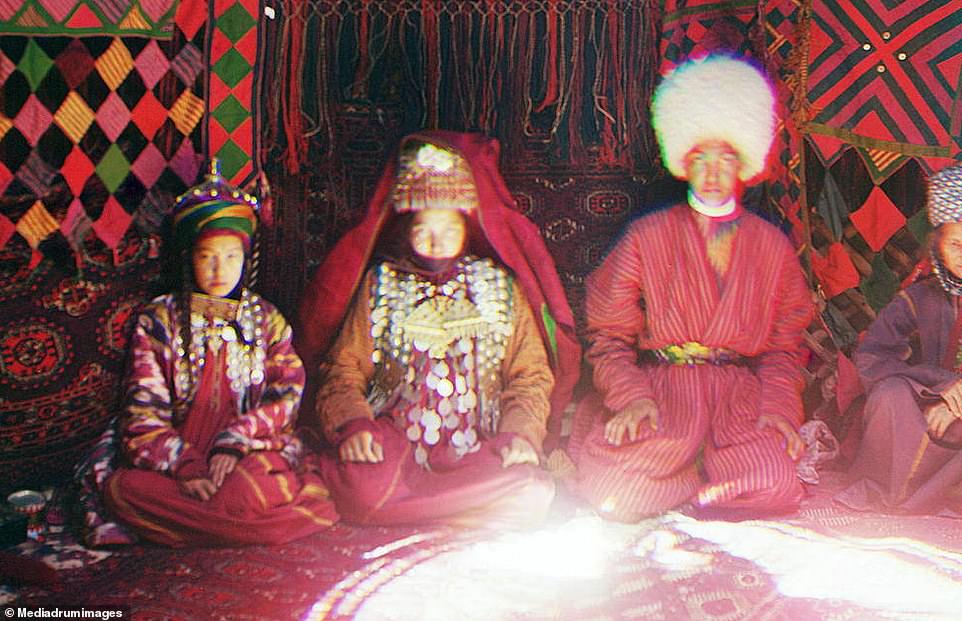 Textiles: Four well-dressed relatives sit on a carpet in front of a backdrop of textiles, in a picture taken inside a nomadic yurt present-day Turkmenistan. The people in this picture are believed to be members of the Teke tribe, who were gradually absorbed into Russia’s orbit around this time, with some even serving in cavalry regiments in Russia’s armed forces. The family’s young son is seated in the centre of this picture, with his young wife to the left and likely his mother on the right 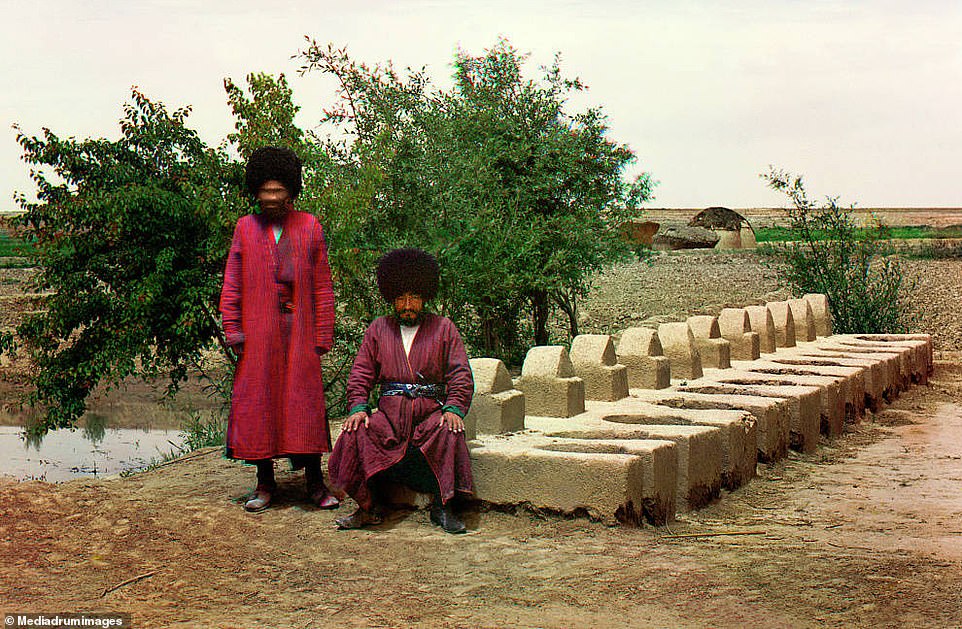 Cooking rice: Two men wearing traditional robes and tall sheepskin hats stand by a row of what are thought to be cooking receptacles, where iron containers could be placed and used to cook rice. One of the men has a dagger under his belt, while the other is standing up close to an irrigation canal which would have been used to water the fields in present-day Turkmenistan. At the back of the picture, on the right, is another of the portable circular yurts where many people lived 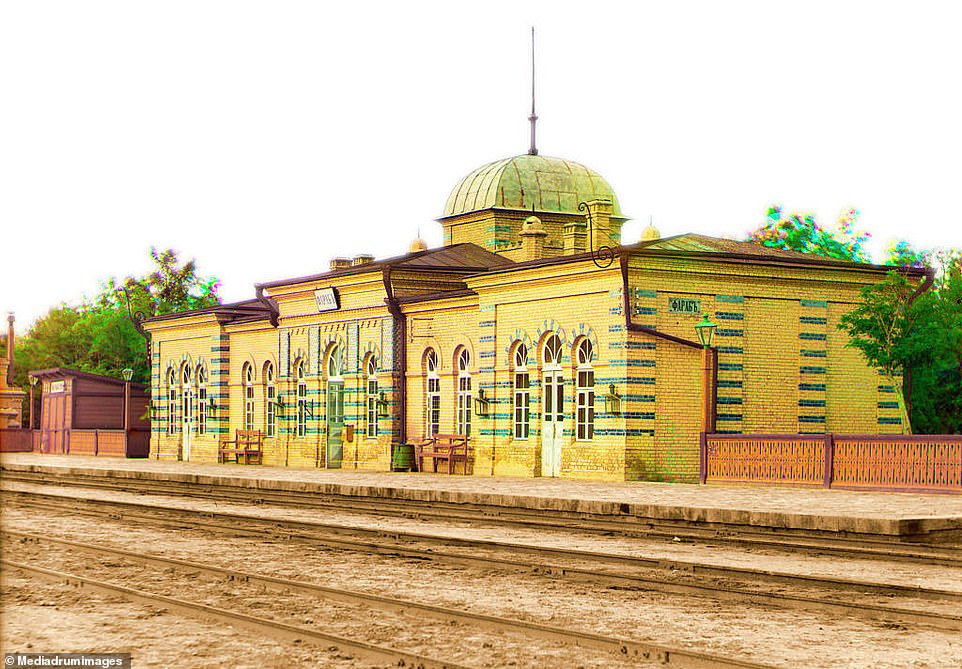 Train station: This picture shows a platform and station building in Farab, in what is now Turkmenistan, where the railways arrived in the late 19th-century as Moscow sought to cement its influence in far-flung Central Asia. Farab lies on one of these routes, the Trans-Caspian Railway, which follows a similar route to part of the ancient Silk – a trading route which for centuries linked the Eastern and Western worlds and which was travelled by Marco Polo in the journeys that led to his famous stories. The railway’s more famous cousin, the 6,000-mile Trans-Siberian route from Moscow to Vladivostok, was completed in 1904 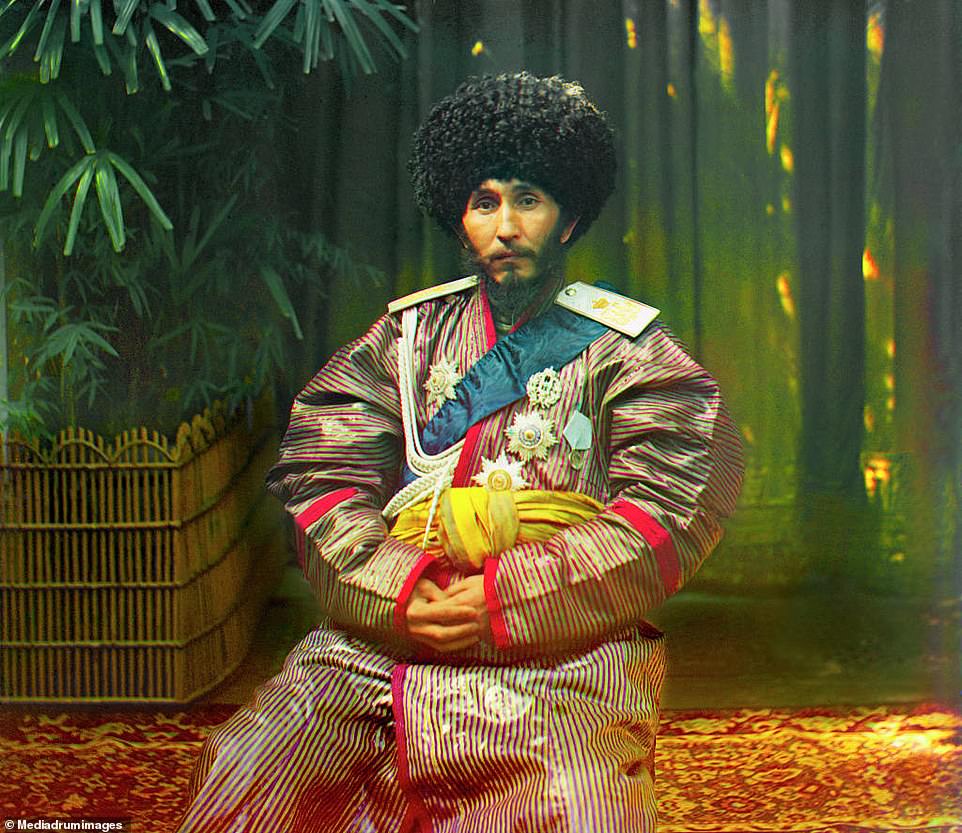 At the Winter Palace: This is another ruler of a far-flung part of Central Asia, although in this image he has travelled to St Petersburg and the Winter Palace that was the home of the Russian Tsars. This is thought to be Isfandiyar, ruler of what was known as the Khanate of Khiva, which was later brought under Soviet rule. St Petersburg was meanwhile renamed Petrograd at the start of World War I because the old name sounded too German. The name was then changed again to Leningrad after the Bolshevik leader’s death in 1924. The name St Petersburg was finally restored after the break-up of the USSR 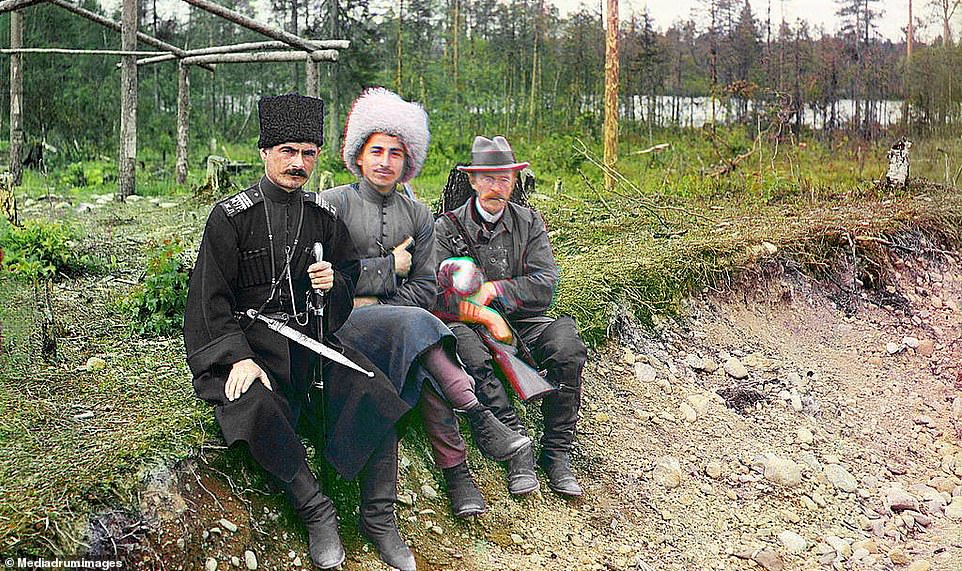 The photographer himself: Sergei Mikhailovich Prokudin-Gorsky sits on the right as we see it, with a cigarette in his mouth, a hunting gun over his shoulder and a dog at his side. Seated next to him are two Murmansk Railroad gendarmes from the northern Caucasus, one of whom is carrying a dagger. One of the lakes and pine forests of Russia’s far north are visible behind the photographer and his friends. Much of Prokudin-Gorsky’s work, which inadvertently became one of the poignant last testimonies to Russia’s former empire, was eventually sold to the US Library of Congress following his death in 1944