Singapore: In near lockdown less than three weeks after being named the best place in the world to be during COVID-19, Singapore is considering a significant shake-up of its vaccine strategy, including increasing the time between shots.

The city state, which is home to more than 20,000 Australians, recorded 38 new cases of community transmission on Sunday, its highest number in more than a year. Eighteen of those cases were unlinked. 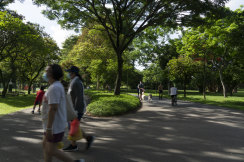 Singapore has been one of the global success stories during the pandemic but is in the midst of a new surge.Credit:Bloomberg

It swiftly announced further tightening of restrictions, including the closure of most schools.

Singapore’s Health Minister Ong Ye Kung also revealed the fresh outbreak had convinced the government to weigh up a significant change in its approach to vaccination.

A quarter of the country’s 5.5 million people have been fully vaccinated and one-third have received at least one dose, he said. That makes the rollout in Singapore comfortably the fastest in south-east Asia in terms of an average of the population.

But after prioritising the most vulnerable citizens and frontline workers in a vaccination drive that to date is only open to people over the age of 45, the government may change tack.

“There have been many international studies that show even with one dose it confers good protection without compromising efficacy. 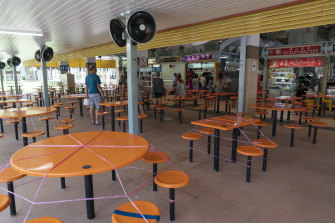 A food centre in Singapore’s Ang Mo Kio area. Restaurants have been closed for a month.Credit:Bloomberg

“Our scientists have been studying this. We have an expert committee and the evidence, locally and overseas, points towards [it being] reasonable for dose two to be further apart from dose one. So instead of 21, or 28 days or three weeks or four weeks, it can possibly extend to six to eight weeks without materially affecting the efficacy of the vaccine.

“This is something we are studying and once we are ready, not too long in the future, we’ll announce the details.”

Singapore is using the Pfizer-BioNTech vaccine, which has been given to people in the island nation with a three-week interval between the two shots. It is also rolling out Moderna, which has a four-week gap between doses.

If Singapore does press ahead with widening the interval between shots it would be following the path adopted by countries like the UK, which is leaving a three-month gap between doses of the Oxford AstraZeneca vaccine.

India, which had 311,170 new cases and 4077 deaths on Sunday, has started doing the same, extending the gap between doses of Covishield – the brand name AstraZeneca is distributed under there – from six to eight weeks to 12 to 16 weeks.

An Oxford University study found the efficacy of AstraZeneca rose from 55 per cent to 82 per cent if the time between doses was raised from less than six weeks to 12 weeks or more, and a single shot provided 76 per cent protection in the first 90 days.

Research by the US Centres for Disease Control and Prevention has also found the Pfizer-BioNTech vaccine is 80 per cent effective with a single dose. On Friday, it was announced that a study of people over 80 by the University of Birmingham University had determined that a 12-week break between administering the first and second shots of Pfizer-BioNTech produced a three-and-a-half times better antibody response.

Singapore is facing nowhere near the scale of infections experienced in the UK and, more recently, in India. On April 27, Bloomberg’s COVID resilience rankings named Singapore as the best place to live during the pandemic.

However, a surge in cases is reflective of a new wave that has torn through south-east Asia in the past six weeks.

While Indonesia and the Philippines have been the hardest hit countries in the region, Malaysia has entered a third lockdown and countries that had avoided major outbreaks such as Thailand, Cambodia and East Timor are recording record numbers.

With children among those infected during the latest spike in cases in Singapore, its Education Minister Chan Chun Sing said health authorities were deciding whether it was safe to use Pfizer-BioNTech for the 12-15 year age group.

US and Canadian health regulators have both approved Pfizer-BioNTech for that age category.

Stay across the news you need to know related to the pandemic. Get it every Monday.