Dozens of Spanish medics from the same hospital have tested positive for Covid after attending a Christmas party last week.

In total, 68 doctors and nurses from the University Regional Hospital in Malaga have tested positive for the virus following a party for 173 people on December 1.

All of those attending the party had either taken antigen tests or had a full course of Covid vaccines including boosters before attending the event, hospital bosses said.

It is not yet clear which variant of the virus they are infected with. 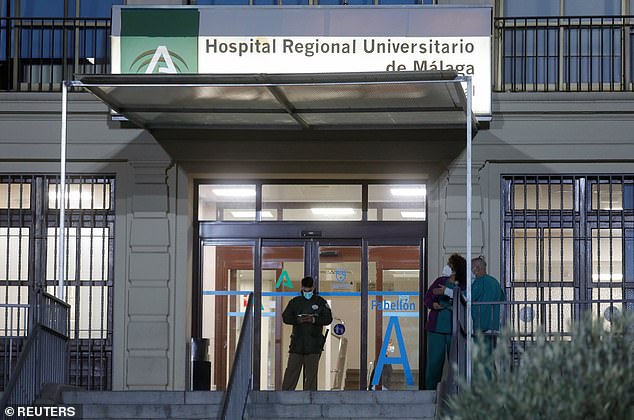 68 doctors and nurses from the University Regional Hospital in Malaga (file image) have tested positive for Covid, following a Christmas party on December 1

Investigations into the outbreak are still ongoing, with officials saying the party has not yet been confirmed as the source.

Another potential source of infection was a large meal for hospital staff that took place during recent days.

All those infected – most of whom work in the intensive care unit – so-far have mild symptoms.

Spain does not require healthcare staff to get vaccinated against Covid, but has double-jabbed around 80 per cent of its total population.

Malaga hospital has not said whether anyone at the party was unvaccinated, but it is likely that most – if not all – of the attendees were jabbed.

‘We must not lower our guard,’ he told journalists in Madrid.

Health authorities in Andalusia have recommended staff at other public and private hospitals do not attend Christmas parties.

Four cases of the Omicron variant have meanwhile been confirmed in Spain’s Balearic Islands, health authorities there said.

A father arrived in the Balearic islands recently and infected two members of his family and a fourth person recently arrived in Spain from South Africa, authorities said.

Spain had earlier confirmed a total of five cases of the Omicron variant.