Two maverick high schools that flipped the traditional teacher-student dynamic and gave their pupils a bigger say in the structure and content of their education have achieved their best ever VCE results in 2020.

Templestowe College once declared “RIP VCE”, so it might seem surprising that it just achieved a cherished median study score of 30 in the mainstream student performance measure it ceremonially buried just four years ago. 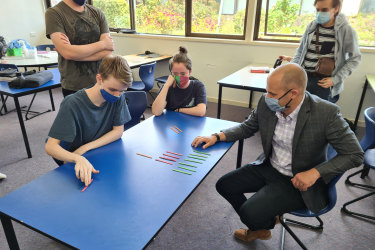 But principal Peter Ellis said it was a result of the school's philosophy that allows students to steer their own studies.

The progressive state school has no uniform or distinct year levels and students work according to their passions and ability. Each of its 1250 students has a personalised learning plan.

"VCE is just one pathway within our school," Mr Ellis said.

"Some students told us that was the pathway they wanted, so we put in a few more programs for those students heading down a scored VCE pathway.

"We're not an ATAR factory, but for those students it's very real, and we have structures in place to support them to achieve well," he said.

A median study score of 30 is the marker of an academically solid school, and Mr Ellis said Templestowe's 140 year-12-equivalent students had worked for five or six years to reach it.

The college also offers VCAL and non-ATAR study options, including a partnership with Swinburne University.

He said the approach had helped the school community get through the disruption of the coronavirus pandemic.

"This is what the school has prepared students for, we haven't prepared them solely for exams, we've prepared them to cope with what the world throws at them."

Mount Alexander College's entry into the "30 club" caps off a remarkable five-year turnaround for the school.

In 2016, the government school in Flemington was at a low ebb. Its VCE results were well below the state average and just 37 children were enrolled in year 7.

The school had lost the confidence of many parents in its diverse and gentrifying catchment. 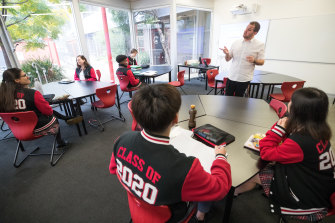 Mount Alexander College has had a dramatic turnaround in the past five years.Credit:Jason South

The school swapped conventional year levels between years 7 and 10 for what it calls a "vertical curriculum" based on students' interests and ability and gave them more freedom to choose the subjects they were most into.

In 2020, a year 8 boy who is exceptionally gifted at maths took VCE units one and two in maths methods.

"It's just meant that kids have a greater voice in their learning and as a result they are more engaged, and we have seen an enormous shift in attendance," principal Dani Angelico said.

Its enrolments are also soaring: the school awaits the arrival of 140 year 7 students next month, and received a $24.77 million capital works grant in last year's state budget to meet growing demand.

Ms Angelico said the school's punt on an unconventional approach to schooling had paid off, as a diverse mix of students from public housing towers and multimillion-dollar homes enrolled in growing numbers.

"It's a very diverse cohort: we've absolutely got a tale of disadvantage there that we will always have, but certainly we have students who come from very well educated, wealthy families that come to us now," she said.

"And they are parents who would have [previously] probably sent their kids not to us, but to independent schools.”

Two other schools joined the "30 club" this year: the Islamic College of Melbourne, a co-educational prep-year 12 school in Tarneit. Its VCE results have improved sharply in the past three years, leaping to 30 from a median of 26 in 2018.

Haileybury Rendall School, a new Darwin campus for the independent school, had a median score of 32, up from 28 in 2019.