Syria’s president Bashar al-Assad and his wife Asma have tested positive for Covid-19 after showing mild symptoms, the government in Damascus said today.

Assad’s office said the president, 55, and his wife, 45, were in good health and would continue to work while in isolation at home.

It makes him the latest in a lengthening line of world leaders to be infected with the virus after Boris Johnson and Donald Trump were both hospitalised with Covid-19 and others including Emmanuel Macron and Jair Bolsonaro had milder cases.

Syria has officially seen around 16,000 cases and 1,000 deaths, but the true numbers are likely to be far higher because the country’s dire economic situation means testing is scarce and lockdown options are limited. 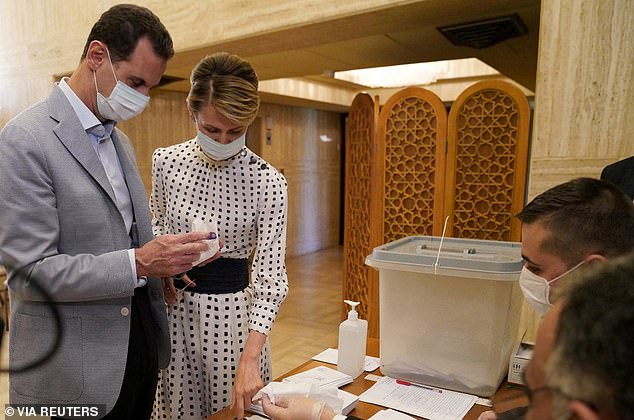 Syria’s president Bashar al-Assad and his wife Asma,  pictured casting their votes at a parliamentary election last year, have both tested positive for Covid-19

Details about Assad’s health are sketchy, but last year he was forced to interrupt a speech to parliament after suffering low blood pressure.

In 2017 Assad’s office denied swirling rumours that he had suffered a stroke or even been shot, saying the president was ‘in excellent health’.

Assad has ruled since the death of his strongman father Hafez al-Assad in 2000, the same year that he married British-educated banker Asma.

In 2018 it emerged that Asma was being treated for breast cancer, but she told state TV the following year that she had fully recovered.

‘My journey is over, with all its pain and weariness, its drawbacks and even its positives. Praise God, it’s over. I have fully triumphed over cancer,’ she said.

‘But she also lashed out at opponents who had shown her little sympathy for her, saying they had ‘carried arms against their Syrian brothers under foreign orders’.

Asma is accused by the opposition of complicity in Syrian government atrocities and has been sanctioned by the US government for her alleged role in the regime.

‘Asma al-Assad has spearheaded efforts on behalf of the regime to consolidate economic and political power, including by using her so-called charities and civil society organisations,’ the US state department said last year.

The war has killed hundreds of thousands of people, uprooted at least 11 million, and created one of the world’s worst refugee crises.

That has left Syria poorly-placed to handle a major Covid-19 outbreak because of its fragile health sector and lack of resources, humanitarian workers say.

A member of Syria’s coronavirus advisory committee said last week that Syria had seen a sharp rise in virus infections since mid-February.

‘Starting February 10th or around that time we started seeing a spike in cases,’ Dr Nabough al-Awa said, adding that he was seeing more patients in his clinic.

Another relief worker said the number of people seeking oxygen tanks had spiked around the beginning of March, but said it was now stabilising again.

The government imposed a nationwide curfew when the pandemic first hit last year but restaurants, shops and schools re-opened from May onwards. 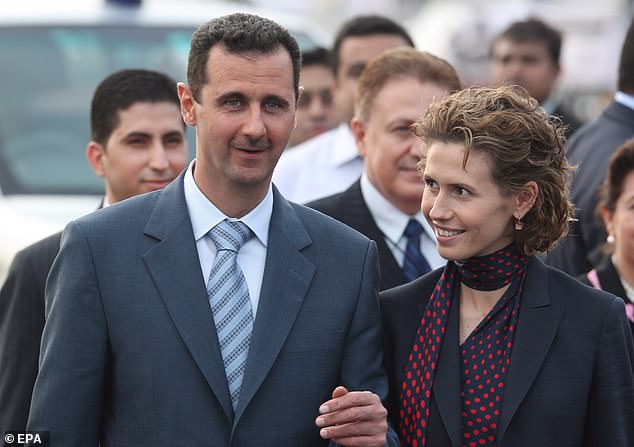 Little is known about the health of President Assad, left, but his British-educated wife Asma, right, recovered from breast cancer in 2019

Mask-wearing is required in government offices and on crowded public transport, while several schools in Damascus have had to shut classrooms recently.

Remote learning and working from home are particularly difficult in a war-torn country where electricity supply and internet access are not stable.

In addition, many schools do not have access to functional bathrooms or supplies of soap and hand sanitiser, which could reduce the risk of infections.

Still, Syria’s health ministry said last Monday it had obtained a supply of vaccines and started administering them to frontline healthcare workers.

Syria had said last month that it had received a supply of vaccine doses from a ‘friendly country’ that it did not name.

Reports claimed that Israel had paid Russia $1.2million to provide Syria with Sputnik V vaccines under a deal to secure the release of an Israeli hostage.

Moscow, which supports Assad’s government in the Syrian civil war, was said to have negotiated the trade-off but details were murky and Damascus denied its existence.