Snake on the loo-se! Terrified West Midlands woman flees her house in the middle of the night after popping to the toilet and finding a 4ft PYTHON trapped in the u-bend

A woman was shocked after she went to use her toilet in the early hours of the morning only to find a snake in the bowl.

Laura Tranter, 34, went to use the loo early on Saturday morning when she saw the large snake in the bowl.

She was so stunned by the reptile she ran to tell a friend who was convinced she was drunk.

Laura says she called the RSPCA but got a message saying they didn’t open until 7am so she had to improvise – and contacted a mate who helped.

Terrified Laura, of Stourbridge, said she think the snake was an escaped pet.

She said: ‘I woke up at half-past five in the morning to go to the toilet, and it was just there. 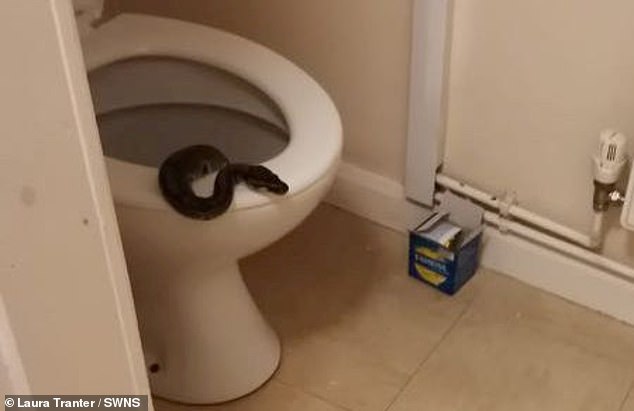 Laura Tranter, 34, was left shocked after she went to use her toilet in the early hours of the morning only to find a 4ft python snake in the bowl (pictured) and resting its head on the seat

‘It scared the hell out of me, I nearly sat on the thing. Its head was just resting on the seat.

‘I shut the toilet door and thought, have I really seen that, so I double-checked if it was real – but I really thought I was hallucinating.

‘I went around my mate Sarah’s house at half five in the morning in my dressing gown and trainers. She was so confused she asked if I’d been drinking.’

She added: ‘My mate’s brother, Dan, is really interested in spiders and snakes and stuff so I called him and he got his friend who lived twenty minutes away, Steve, to come and get it out.

‘It was actually stuck in my toilet, because it was so fat in the middle that it couldn’t get out and couldn’t get back.

‘We couldn’t actually get it out, so we had to put washing up liquid down the toilet and then flush it to help get it out. 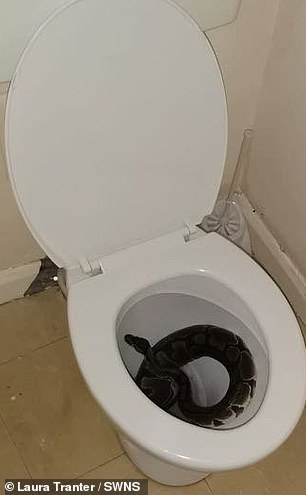 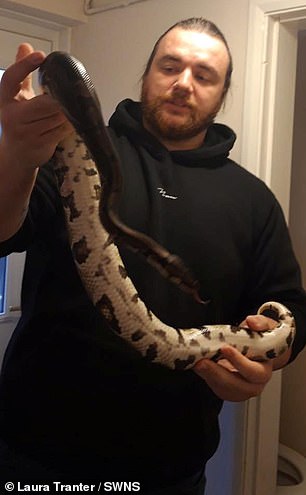 Pictured: Steve (right), a friend of a friend with an interest in Snakes and Spiders, eventually released the reptile after using washing up liquid to grease its body and pull it out of the pipe

‘Steve and Dan think that someone might have let it out after keeping it as a pet and deciding they didn’t want it, and it had got into the sewer somehow.

‘I still can’t get my head around it, I really can’t.’

The snake has been handed to the RSPCA.