Travellers who have taken over an affluent park in West London will be forced out today after the local council took its five-day battle to remove them to the High Court.

Legal representatives from Richmond Council are this afternoon seeking a court order for their eviction from Kew Green, where the group have upset neighbours over the bank holiday weekend.

The order is almost certain to be approved, with a local authority spokesman saying: ‘How much time the group have to leave depends on the court.’

The travellers arrived on the picturesque park five days ago on with around 12 caravans and other vehicles. Some of the cars had Irish registry number plates.

Despite being asked to move on Friday, the group showed no signs of leaving as they walked around the site.

Children still dressed in pyjamas played with wooden stakes installed by the council in an attempt to contain the group but they were later ripped up.

Security guards have been patrolling the green which is just an eight-minute walk from popular attraction Kew Gardens and is surrounded by properties valued at an average of £2million each.

Police have also been monitoring the situation after complaints from local residents that a local alleyway was being used as a toilet.

Despite the impending eviction the travellers showed no sign of hitching up their caravans and leaving.

One bare chested man among the group said: ‘We will leave when we want.’ 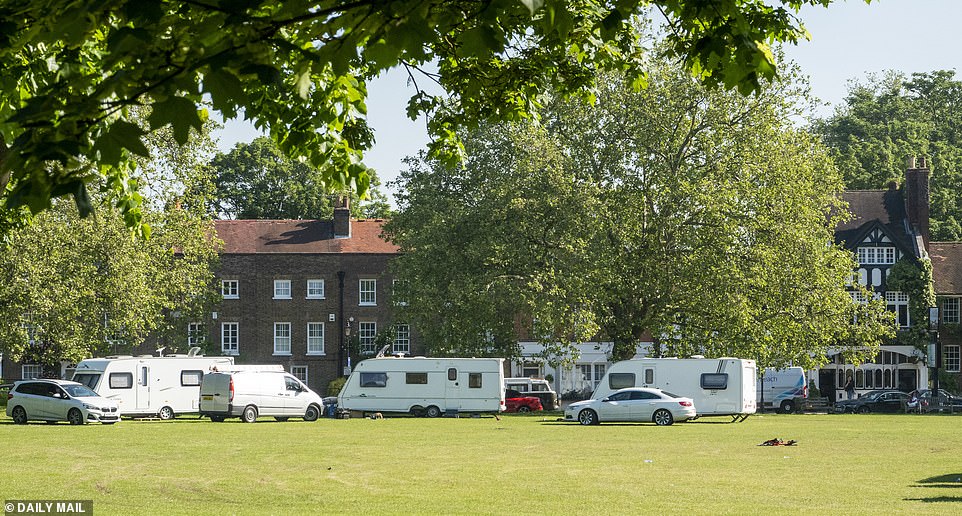 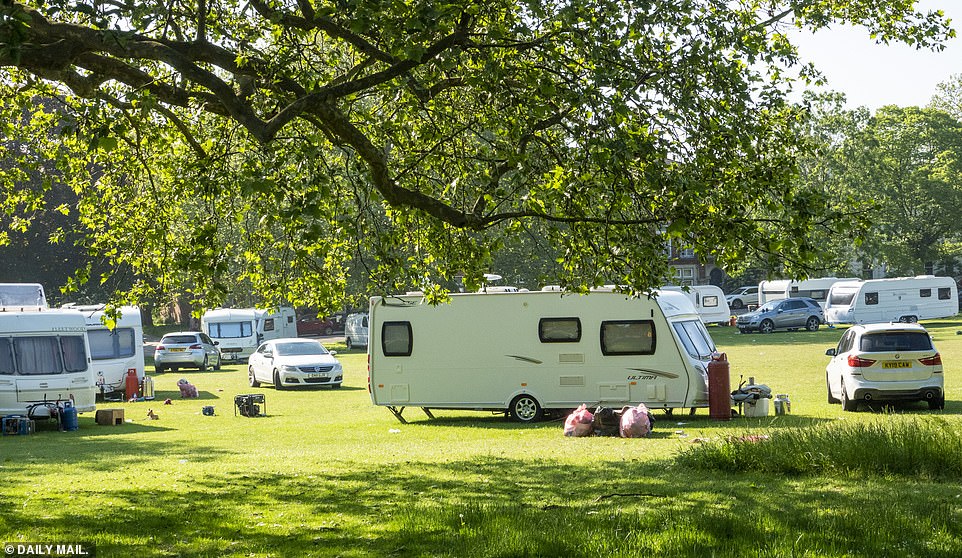 Legal representatives from Richmond Council are this afternoon seeking a court order for their eviction from Kew Green, where the group have upset neighbours over the bank holiday weekend 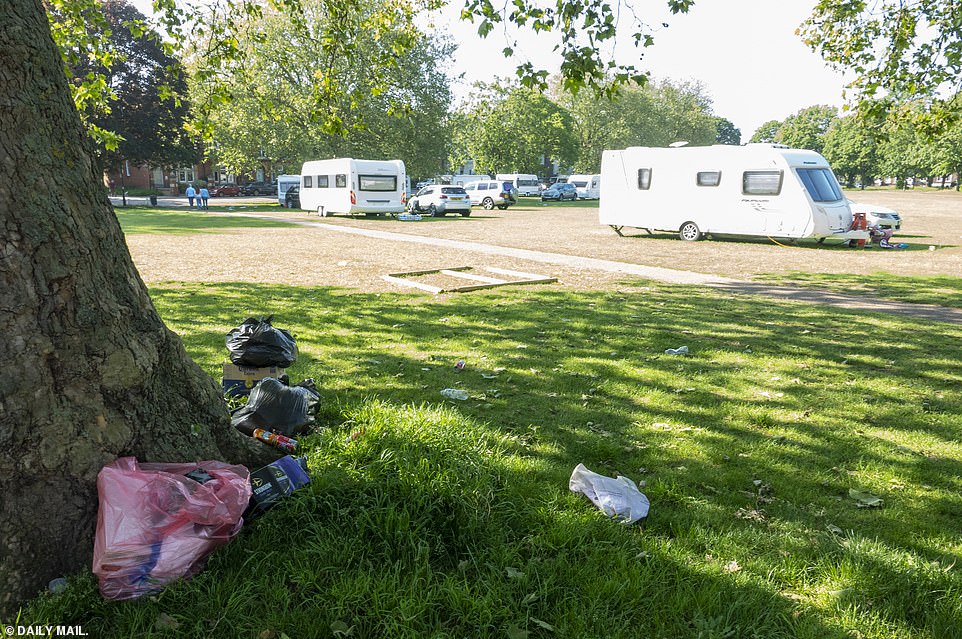 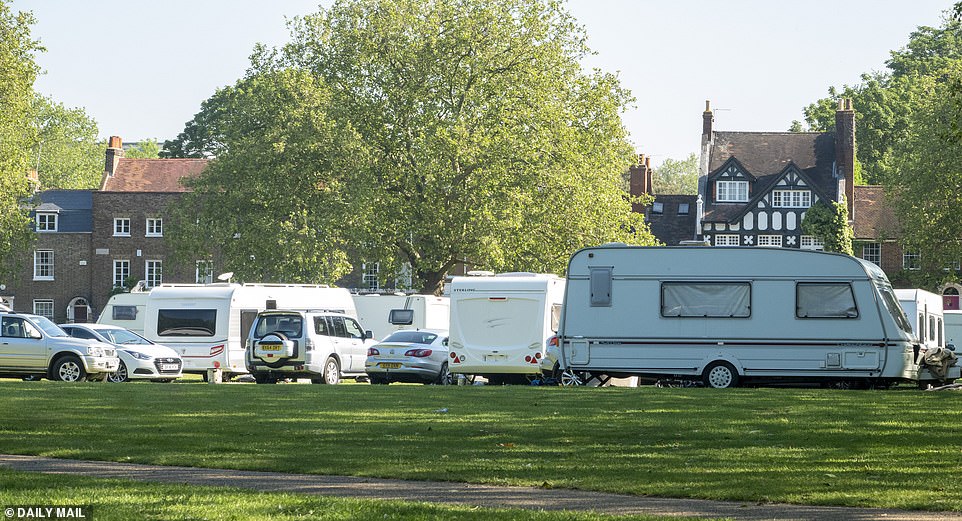 The order is almost certain to be approved, with a local authority spokesman saying: ‘How much time the group have to leave depends on the court’ 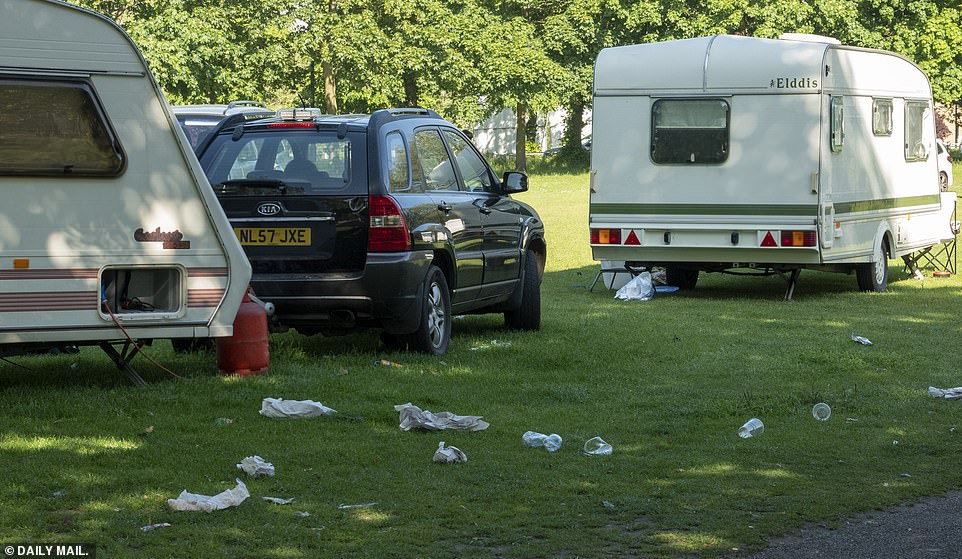 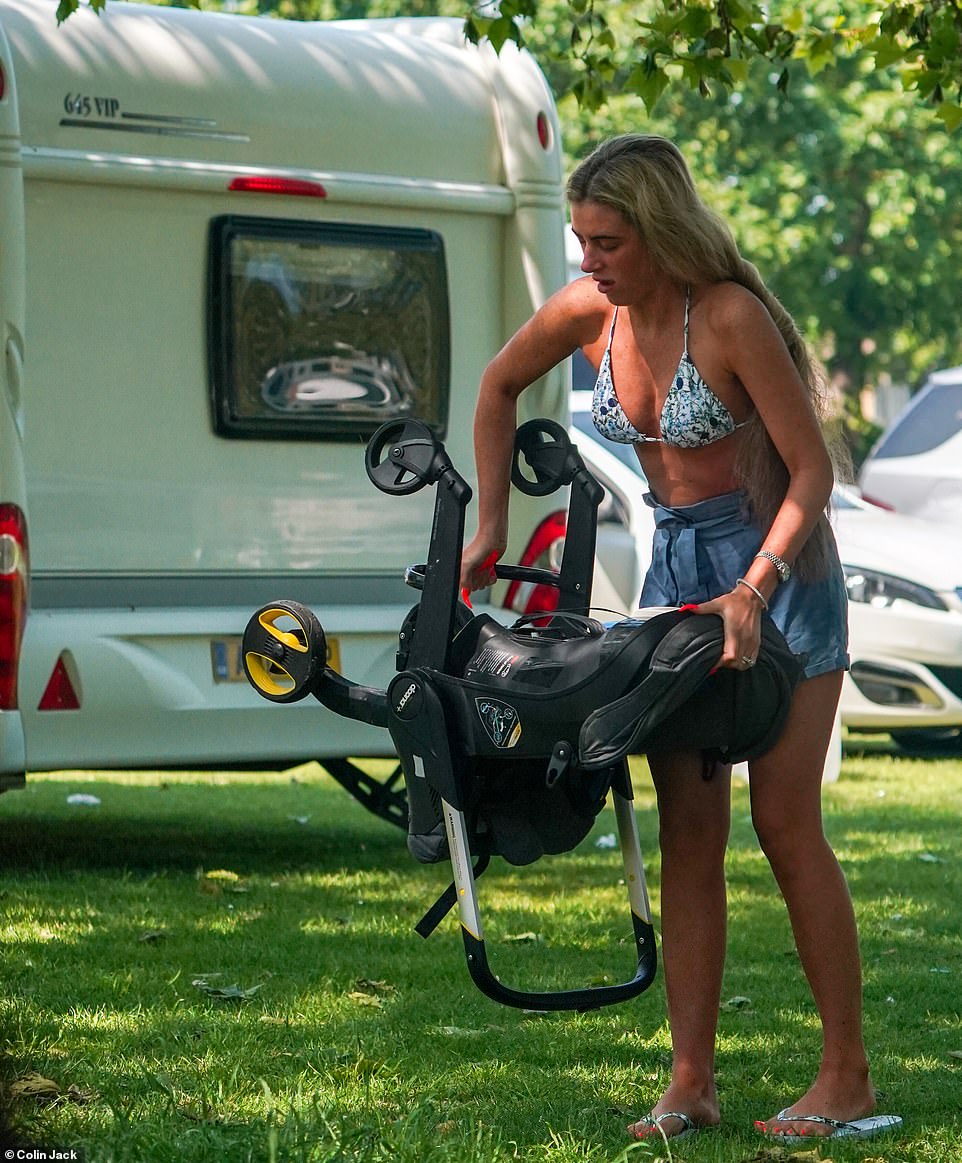 A woman folds a pram over the grass yesterday as the travellers continue to stay on Kew Green in Richmond, West London 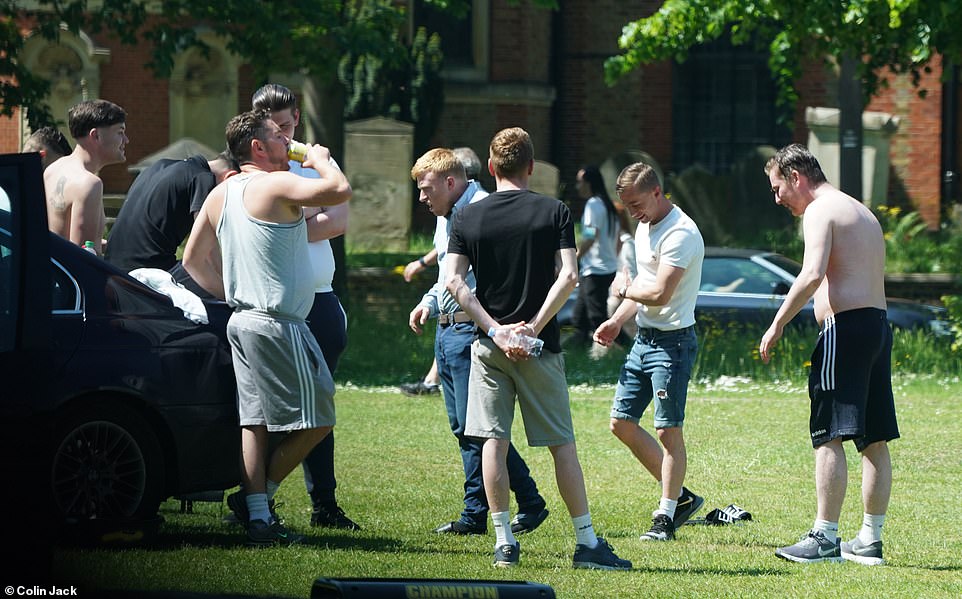 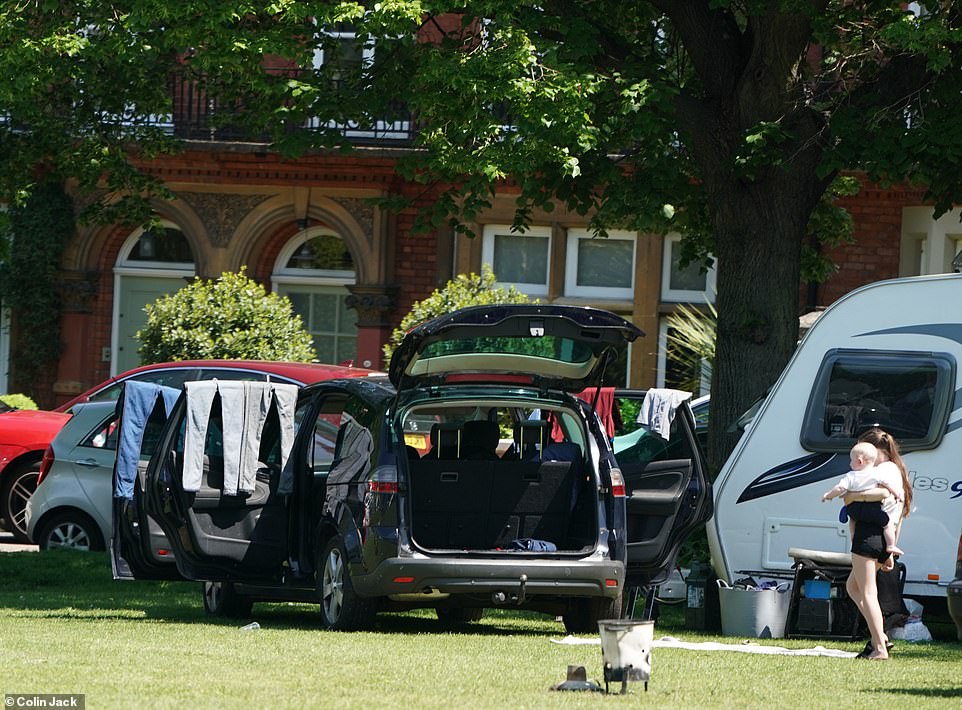 Local residents were hopeful the eviction goes smoothly, with one telling MailOnline: ‘We just want them gone. What gives them the right to take over the Green?

‘Fortunately there has been no trouble but they will not be taking their rubbish with them so someone has to pay to clear that up.’

The council has promised to repair any damage to the green as well as dispose of dozens of black rubbish sacks.

Residents in the upmarket neighbourhood who would normally be enjoying picnics in the warm weather say they have been forced instead to remain indoors over the weekend.

Security guards who had been patrolling the green kept a low profile ahead of the court hearing.

One local said she caught a teenager from the traveller camp trying to steal her neigbour’s vintage Triumph motorcycle.

Sophie Hunter, 51, said: ‘I caught the lad sitting on the bike and trying to walk it away down the road.

‘I shouted out to him and told him that he couldn’t do that and he tried to argue that it was his motorbike. It was only when I started trying to film him that he got off.

‘I called the police but they didn’t send an officer down and haven’t called me back. In fact the police have been scarce since the travellers arrived last week. It’s caused a lot of upset locally because on a day such as this you’d get people sitting on the green, families would play games and have picnics.

‘But the travellers have ringed the space with their caravans and are very intimidating. A few of them have given a friend of mine some verbals for asking them to turn their generators off.

‘It’s a shame because it’s the nicest weekend weather we’ve had in quite some time. Apparently a few people have used an alley between some of the houses as a toilet and a few of the kids have been seen going through people’s allotments.

‘I have to say I’ve avoided going on the green altogether, I usually walk my dogs across there but I’ve taken the long way around today. I’m worried there might be broken glass on the grass from where they’ve been drinking out of bottles and I don’t want the dogs’ feet to be cut.

‘This is a conservation area and to get anything past planning from Richmond council takes a miracle…unless you turn up mob handed and plonk a load of caravans in the heart of the community.’ 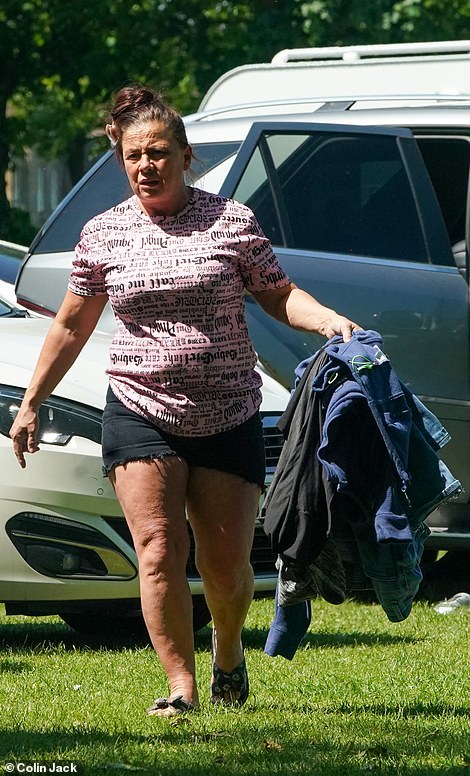 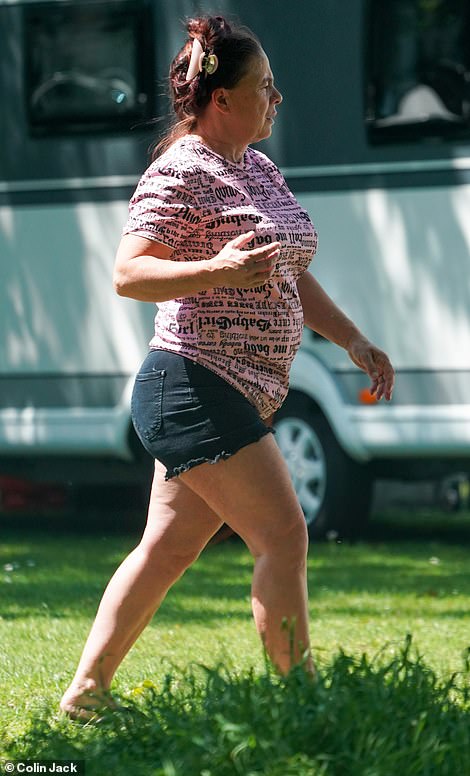 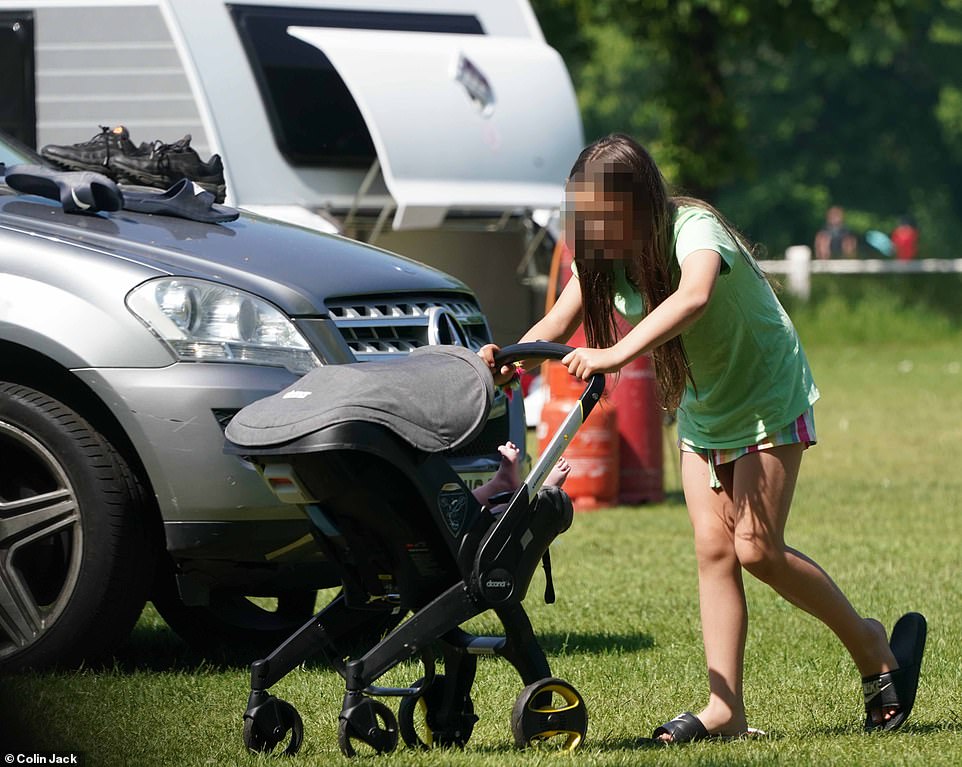 Groups of bare chested men were yesterday seen soaking up the sun drinking cans as children cycled on the green. Families had opened car doors on vehicles parked next to their caravans to use as makeshift washing lines.

There were piles of rubbish bags placed neatly by the bins with very little litter strewn across the green.

Local resident Jane Walker, 45, said she would normally take her three-year-old son to Kew Green to play but felt too intimidated this afternoon. he said: ‘I don’t want to be that person, but I’m too worried about going on there at the moment with the older teenagers hanging around.

‘I’d normally take my son over to the green and maybe kick a ball about it but I’ve stayed at home today instead. The travellers have kind of taken over the community space. I hope they aren’t going to be there much longer.’

A couple, who have lived in the area since 1974 but declined to give their names, were walking past today. The man said: ‘We haven’t had travellers on the green for years and years and I hope it doesn’t become a regular thing.

‘I know some travellers used to pitch up on land near to the National Archive but the council put bollards and gates there a few years ago and they haven’t been back since. Perhaps that needs to be done here but it wouldn’t be that pleasing on the eye to surround the green with fencing. 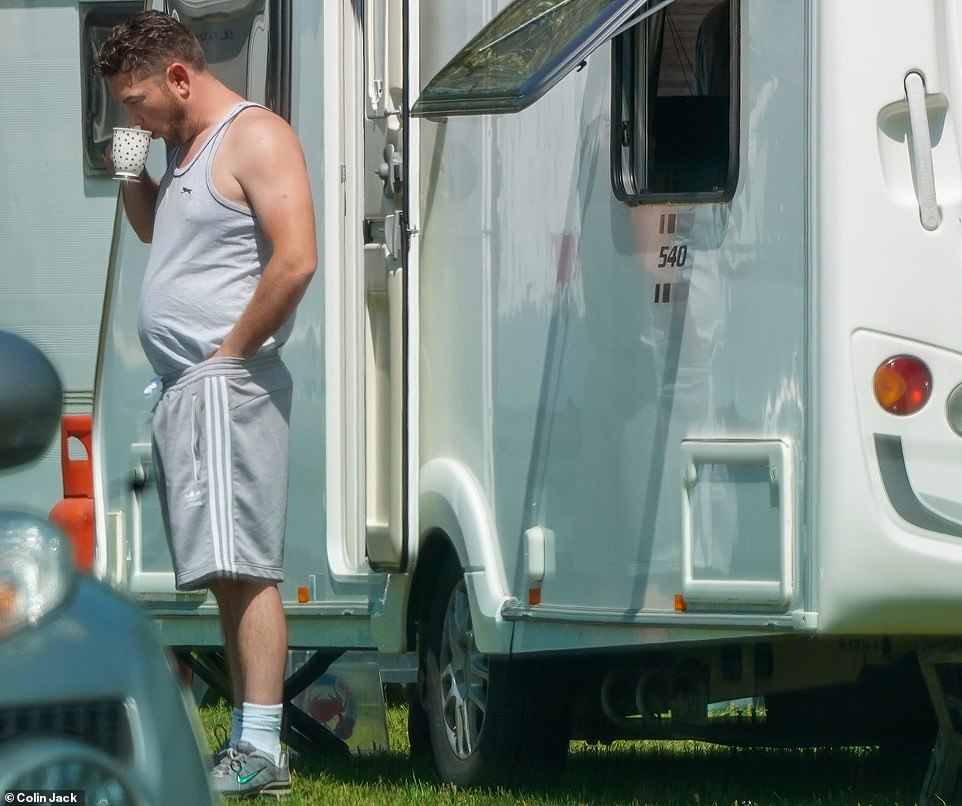 A man stands outside a caravan yesterday as the travellers continue to stay on the green, which is  a short walk from Kew Gardens 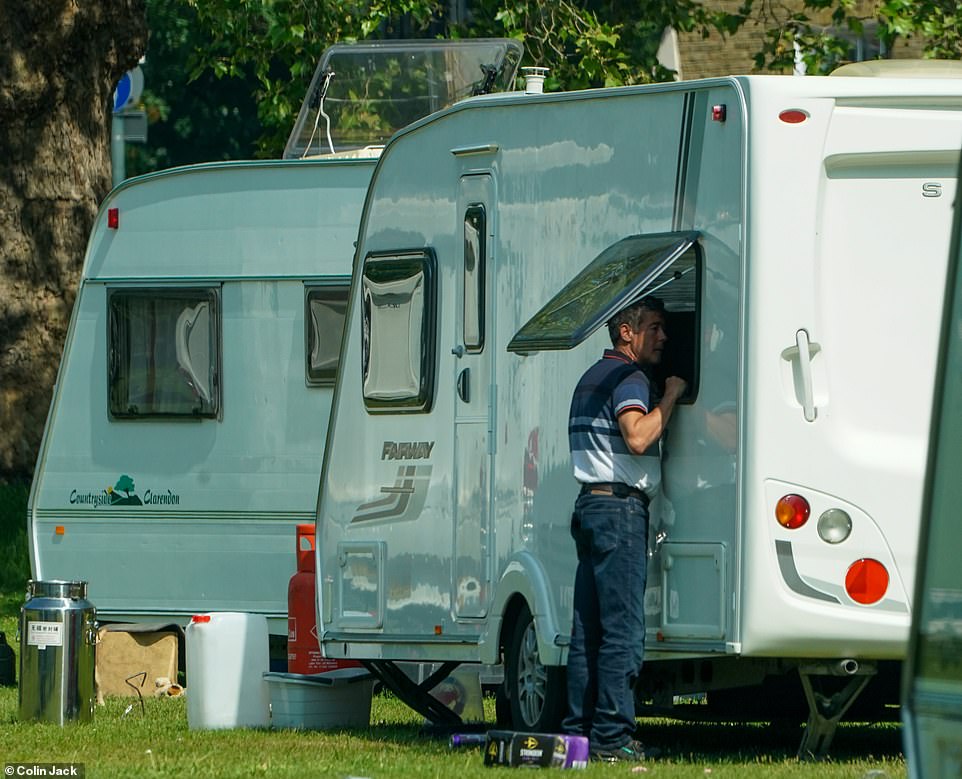 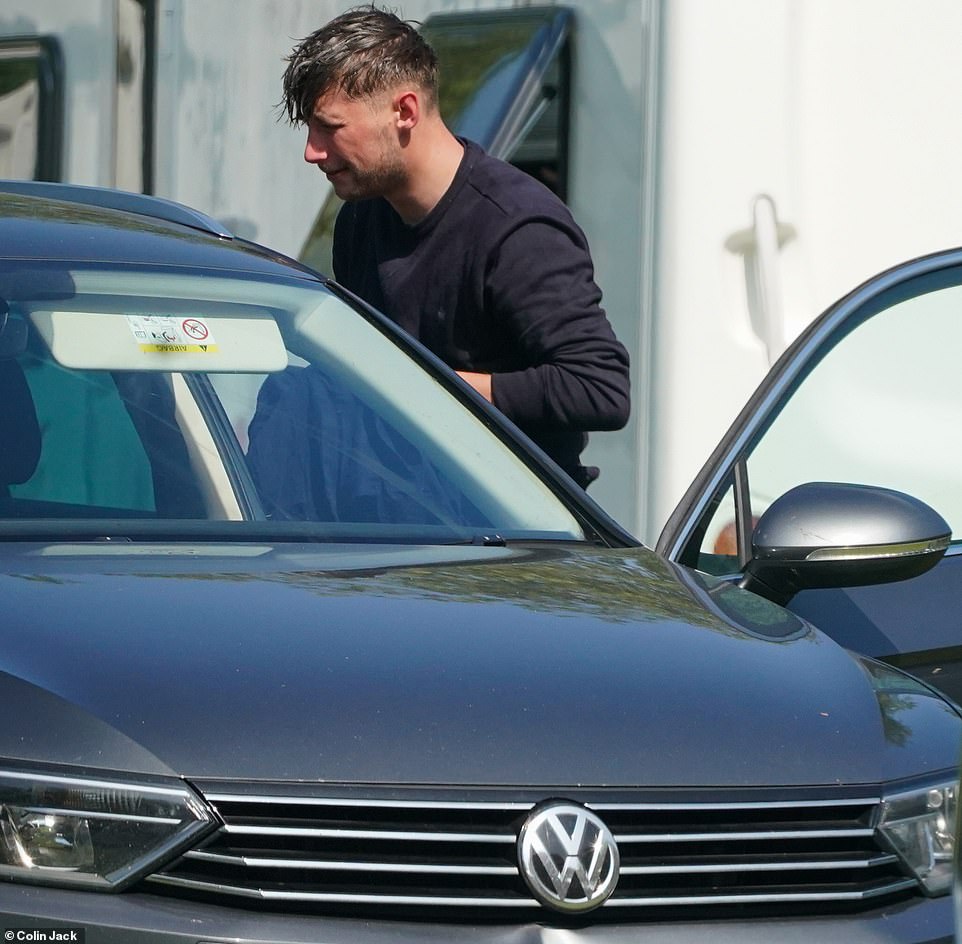 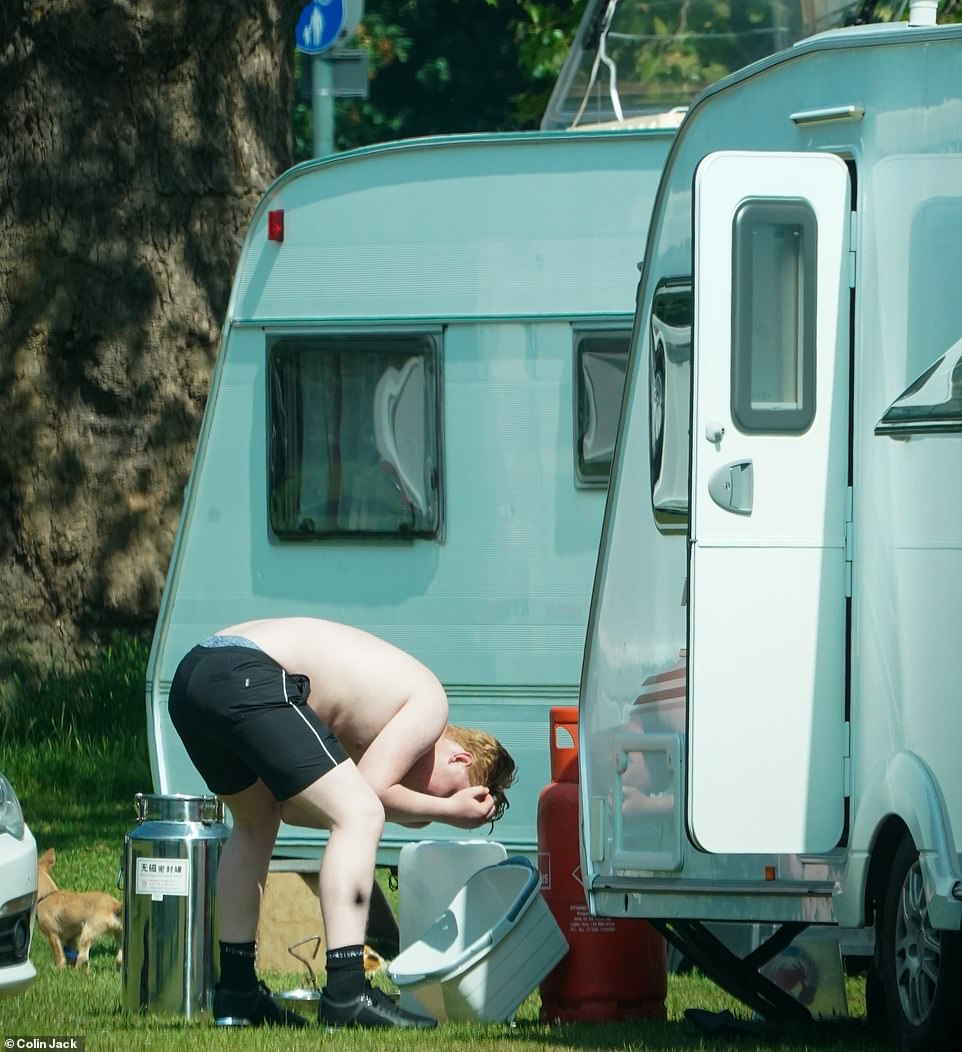 ‘As far as I know there hasn’t been many major problems although I did hear that someone was chased over Kew Bridge for trying to take photos of them the other day. The council sent a worker down to put up notices from the High Court on posts but they were removed and dismantled pretty much straight away.

‘My guess is that if they’re not gone by tomorrow, then they’ll be here until the end of half term.’

Artist Sue Mason, 72, said: ‘I’ve not been too bothered by them myself, although it’s a shame that the families would normally be picnicking and enjoying the green have been put off from going.

‘There isn’t much mess as far as I can see, the families on there have cleaned up after themselves. Whether there is any damage done to the grass from their vehicles we’ll have to see.

‘But there hasn’t been any trouble, there’s not been any loud music or shouting and swearing. The only noise is from their generators which admittedly do go on until late at night. That said I would want them to move on fairly soon.

‘We used to have knee-high railings that used to surround the green but much of it was removed to help manufacture ammunition during the war. Perhaps we need to put it back?’ 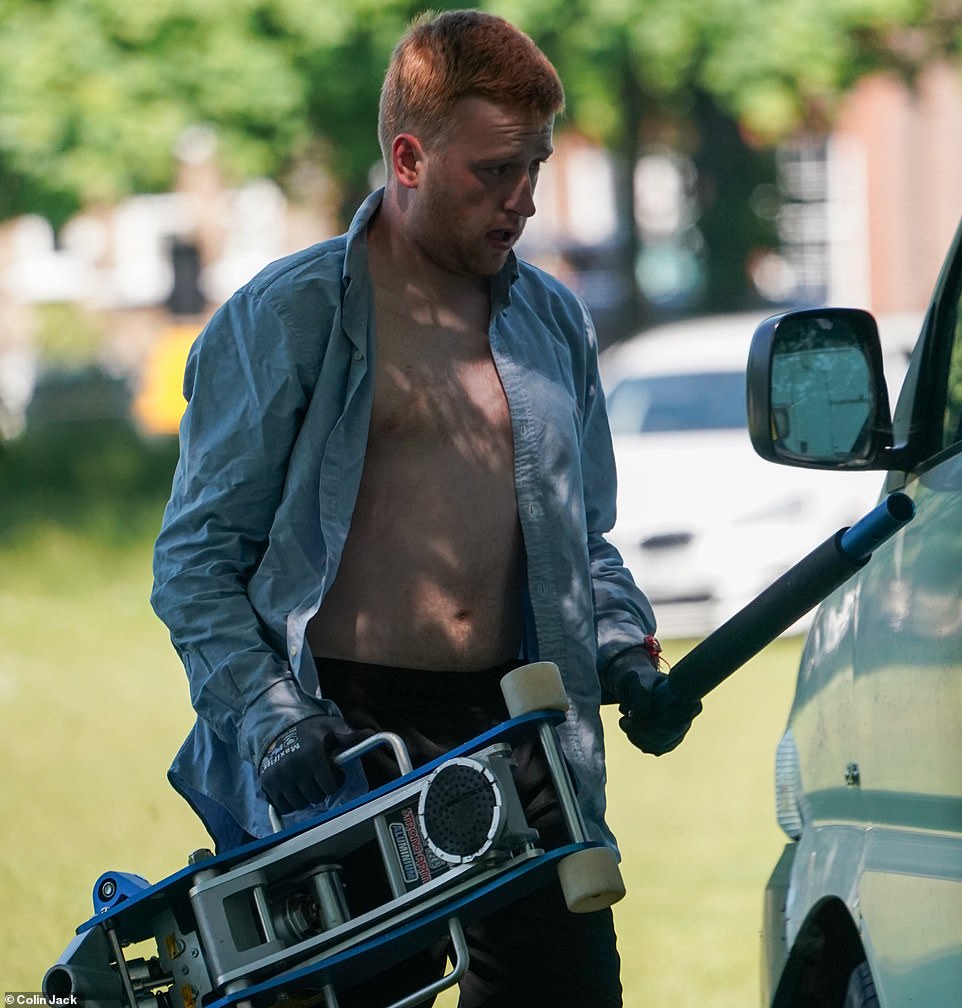 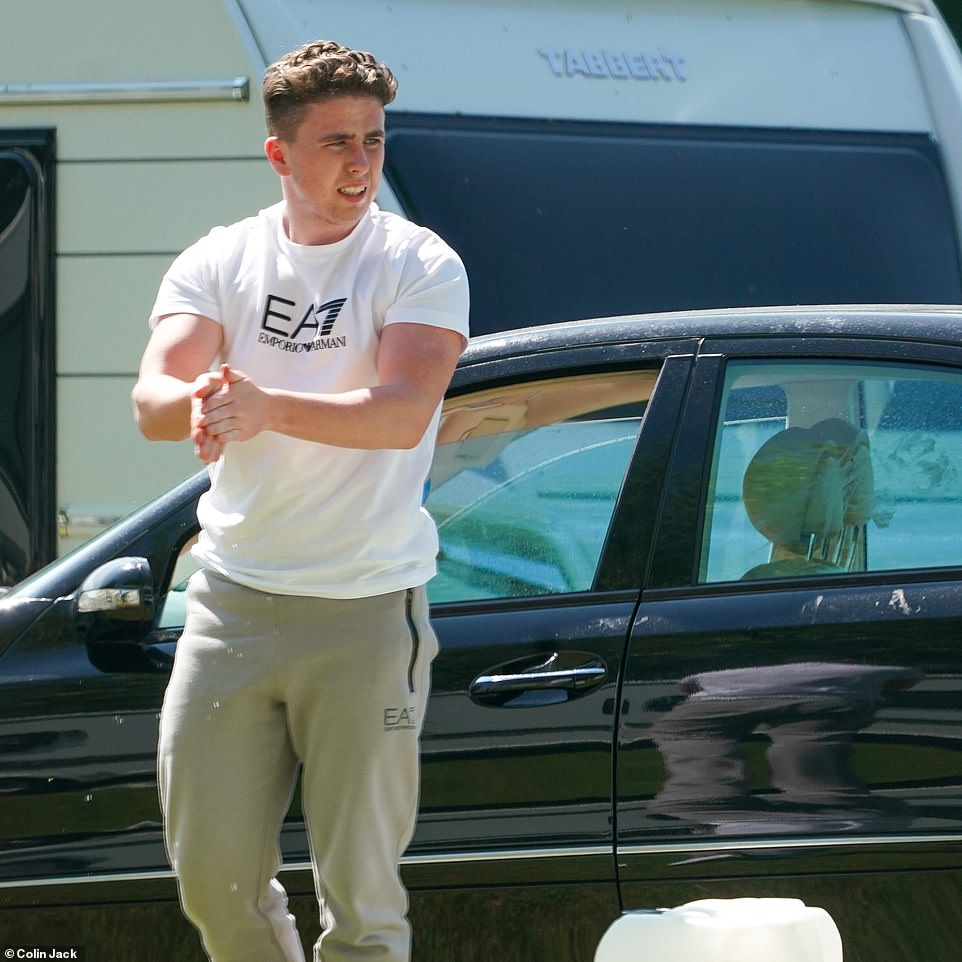 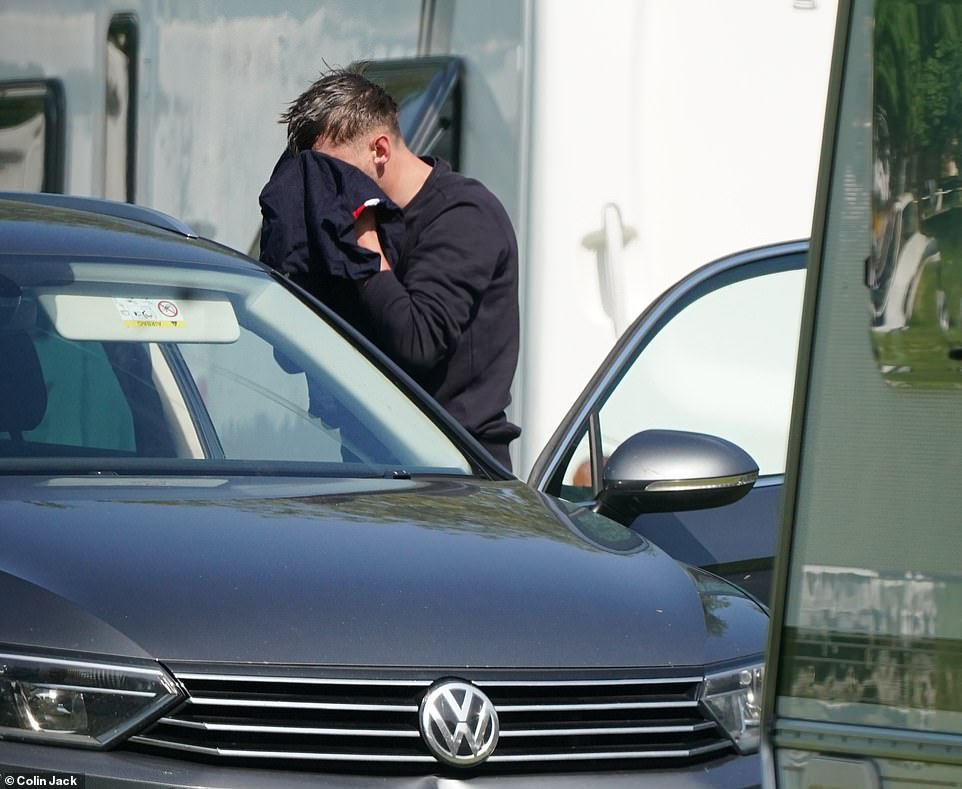 On Friday, Richmond Council confirmed it would start the legal process to obtain and enforce a possession order.

Delays were expected due to a High Court order earlier this month that denied the council’s request to extend the previous expedited injunction process, in common with numerous other local authorities.

Instead, the council is forced to go via the courts to remove the group. A spokesman for the local authority confirmed once the travellers have been removed it will endeavour to repair any damage caused.

Speaking on Friday, Councillor Julia Neden-Watts said: ‘A small group of travellers has arrived in Kew. This morning, Council officers will commence the legal action required to expedite their departure.

‘Due to a recent court ruling, this process will not be as fast as residents would like and I know that they will be concerned, but we have to work within the law.

‘As soon as the travellers leave, we will inspect the area and ensure that any damage is repaired, and waste removed. Our park guard officers, along with the police, will be monitoring the site closely until the group depart.’

A Scotland Yard spokesman said: ‘Police were called to Kew Green, Kew, at 4.28pm on Thursday, May 27 to reports of a group of vehicles on the land.

‘Officers attended and regular patrols around the area have been carried out during the past few days.’