Two teens escape out the window as flames engulfed their NYC building - WSBuzz.com
Skip to content

Dramatic video captured the moment two teenage siblings escaped out a fourth-floor window of their 14-story New York City building as flames engulfed their apartment in a blaze that left their mother critically injured and her boyfriend dead.

Video shared by Justin Malpica via Storyful shows plumes of smoke billowing out the fourth-floor window of the Jacob Riis Houses in the East Village on Thursday as the two siblings – aged 18 and 13 – attempted the harrowing escape.

A teen in all black, later identified to be an 18-year-old girl, climbed out the shattered window and dangled from the windowsill about 50 feet above the ground. She then latched on to a narrow yellow pipe fastened to the building as people below stretched out what appeared to be a sheet.

Her 13-year-old brother followed her out the smoke-engulfed apartment and swung his legs to reach the pipe before his sister pulled him to her side.

A second video showed the teens shimmying their way down the pipe as flames shot out the just-vacated window. 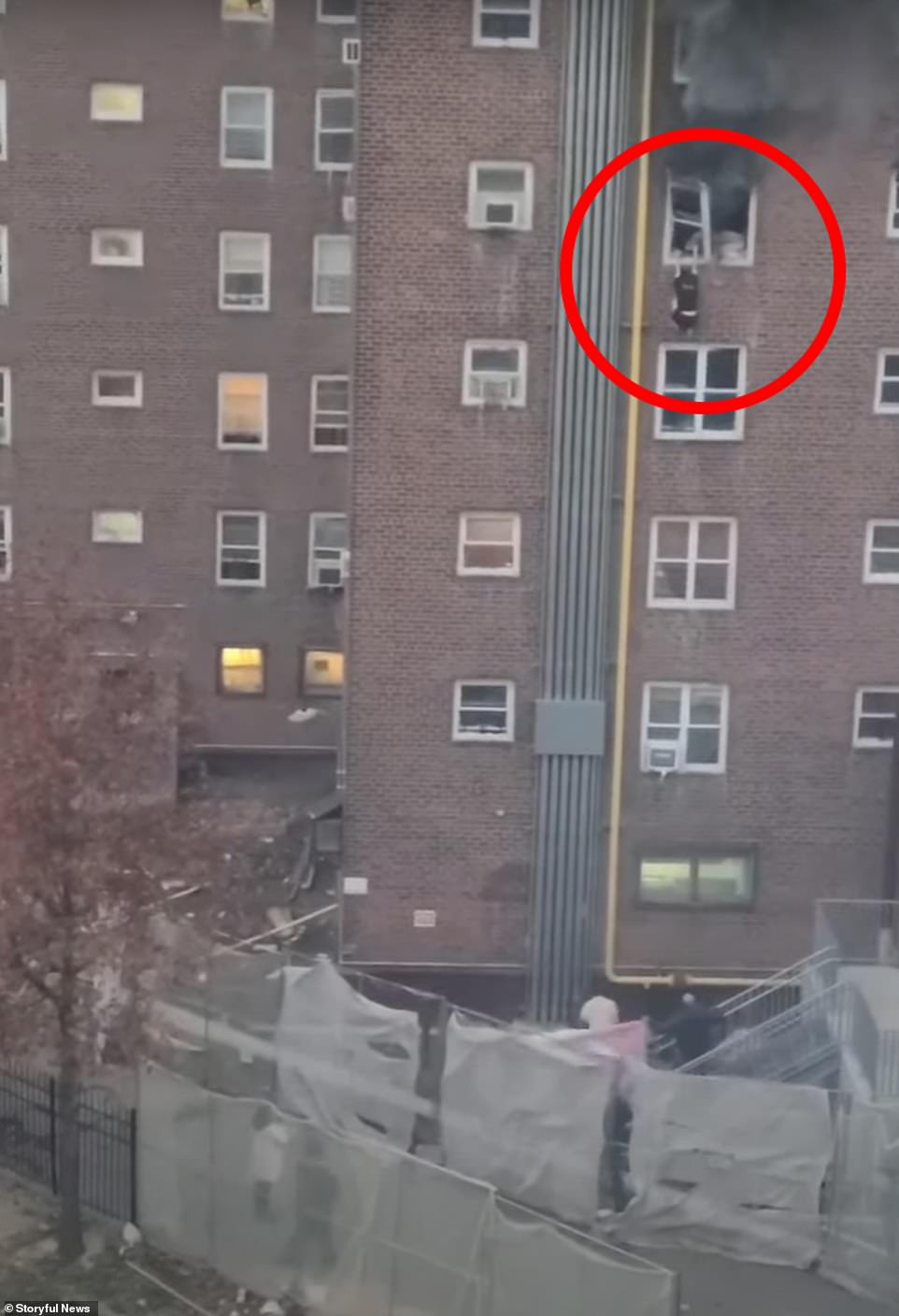 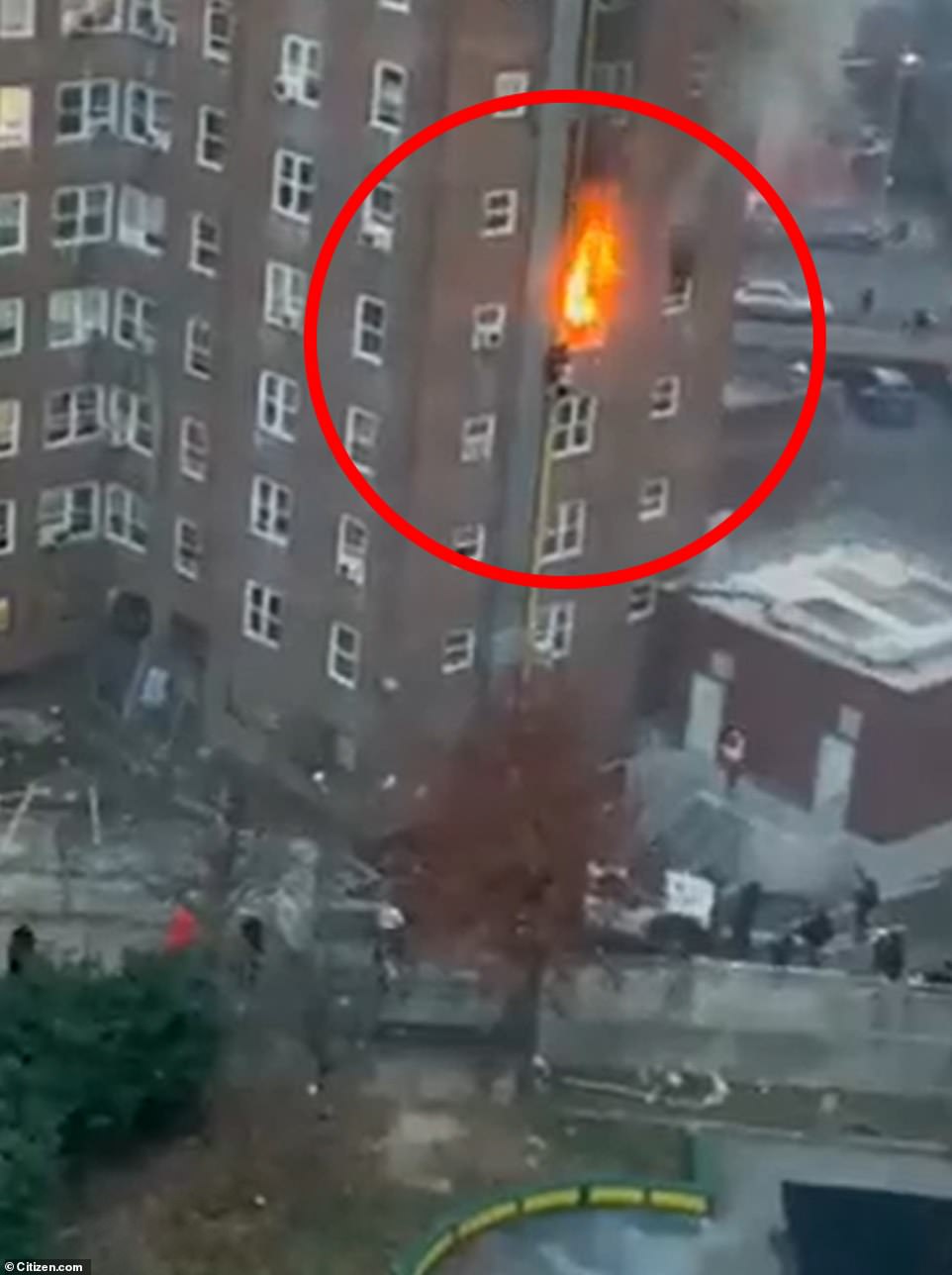 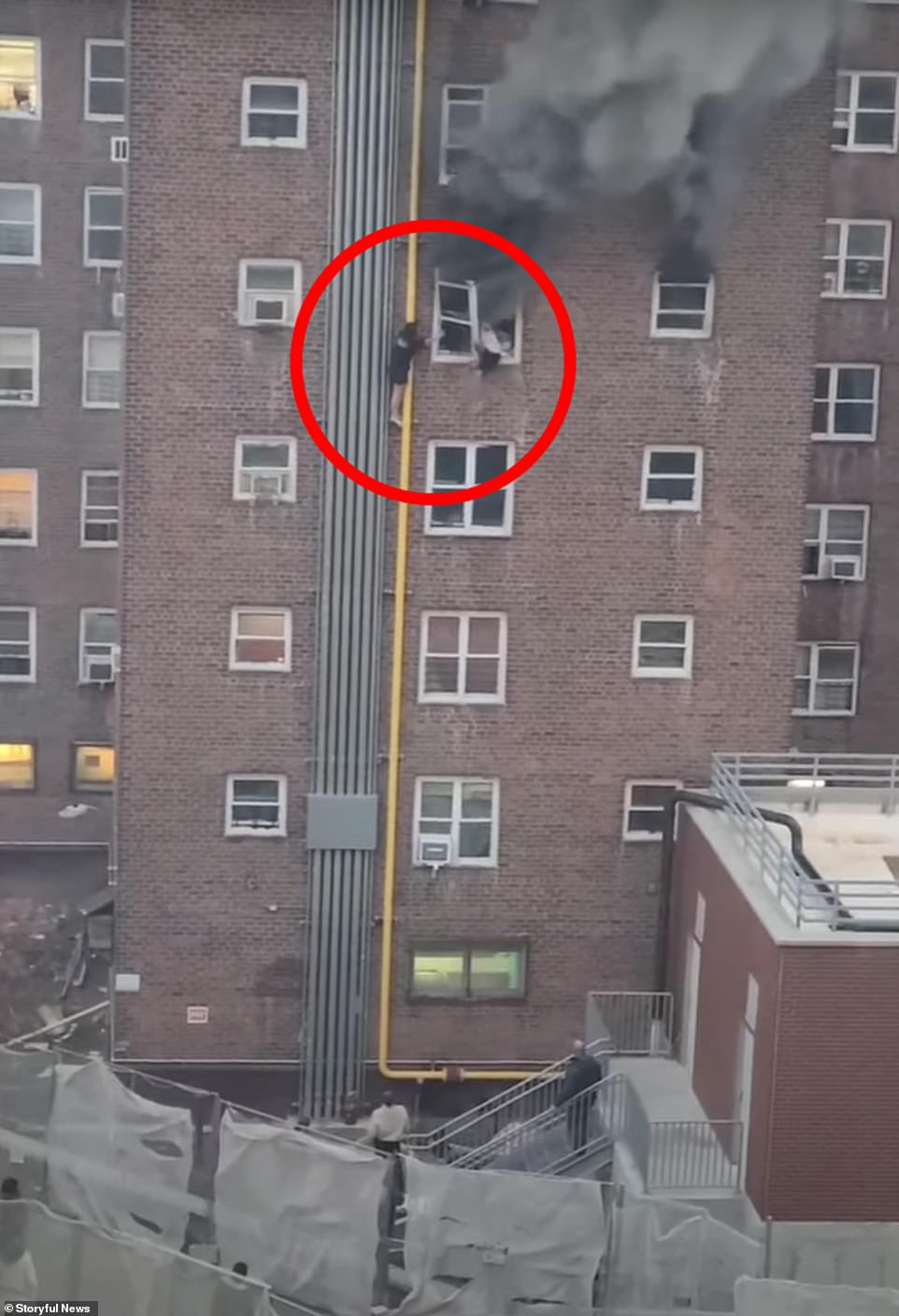 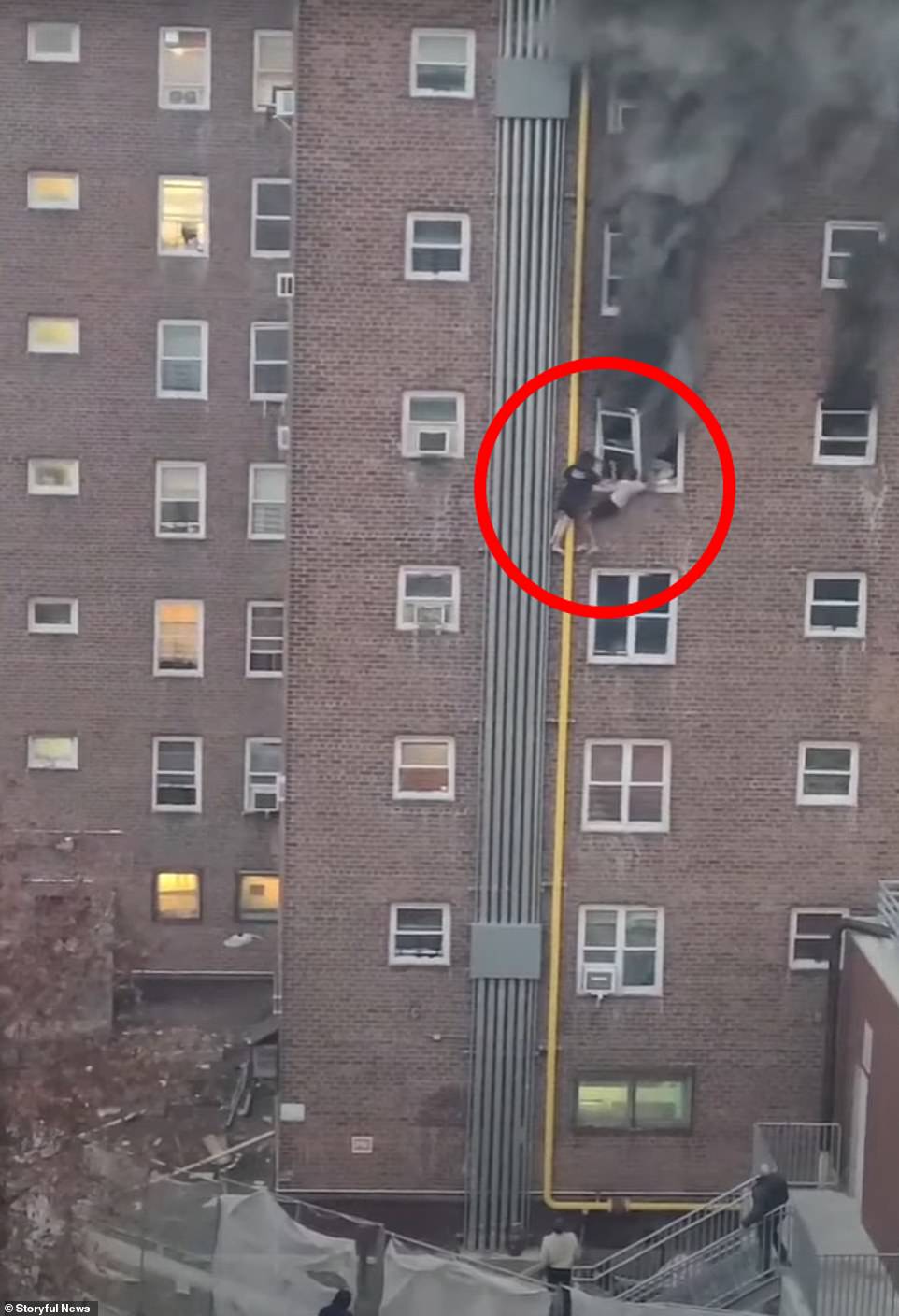 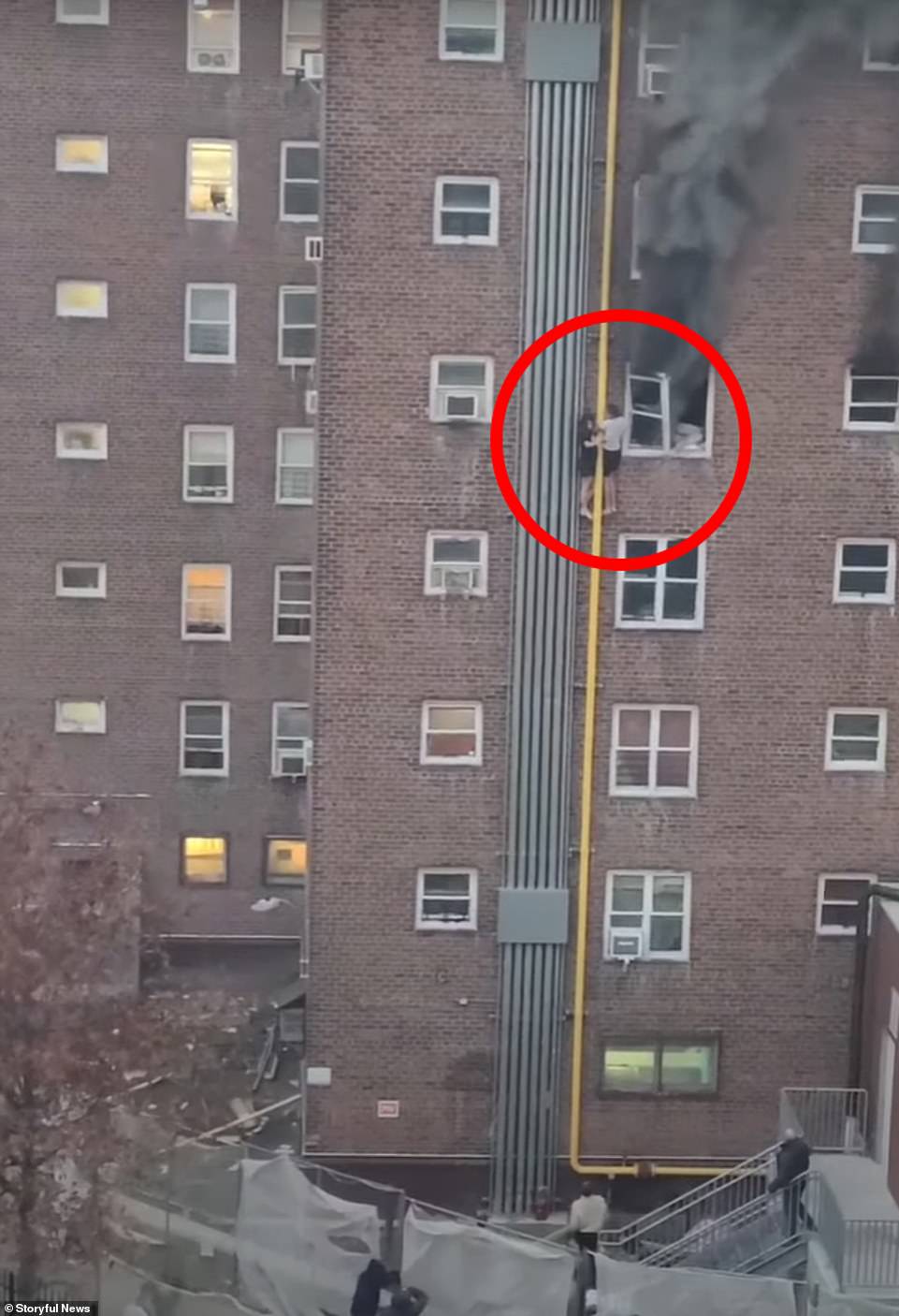 Despite firefighters arriving within four minutes of the 911 call to the NYCHA complex at 118 Avenue D, the siblings continued their perilous descent before the boy made it safely to the ground after 25 seconds, followed by his sister after another 17 breathless seconds.

‘Her skin was off her arm, peeling,’ neighbor Shala Coleman told the NY Daily News. ‘I just put her in the blanket. Me and a police officer carried her to the benches.’

The unidentified siblings were rushed to New York-Presbyterian Hospital Weill Cornell in stable condition but a 46-year-old woman identified as the kids’ mother was in critical condition.

Their mother was found fighting for her life in the burning apartment, where the dead body of an adult man was also discovered after the blaze broke out around 7am.

The cause of Thursday’s fire is still under investigation but fire officials said the apartment was filled with electric bikes.

Neighbor Shaquane Mitchell said she and several others tried to break down the door of the family’s apartment as the mother screamed for help. 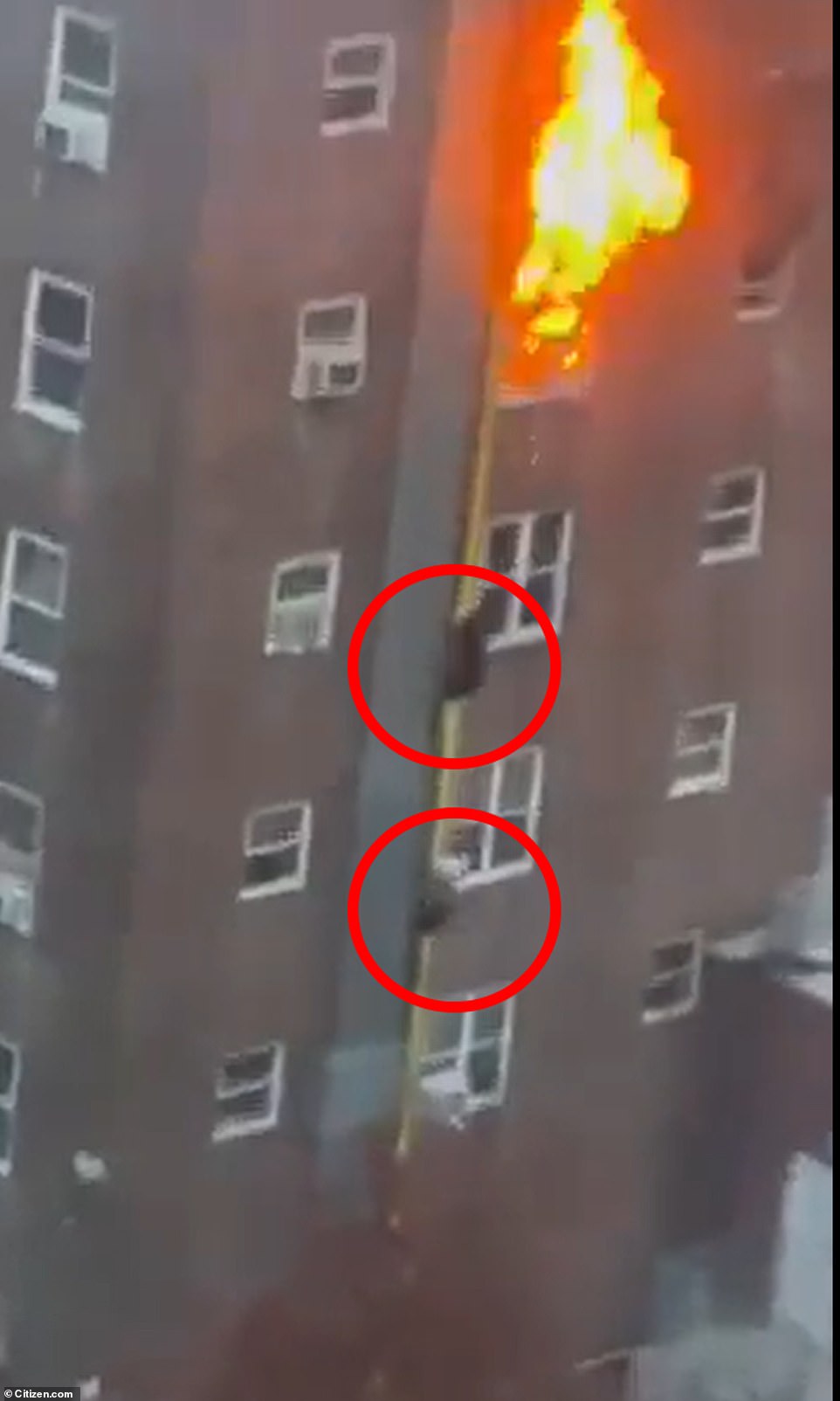 ‘We tried to kick in the door,’ Mitchell said. ‘She couldn’t unlock the door, the mother. She was yelling “I can’t get it open!”‘

Eyewitness Christian Cortes, 20, was outside the building and recorded the teens dramatic escape.

‘It was terrifying,’ Cortes remembered. ‘I was praying to God for them to get down safe. She grabbed that pole and she was looking like she was going to let go.’

Cortes recalled seeing bikes being tossed out the window of the burning apartment.

She recalled visiting her neighbors’ apartment and commenting on the amount of bikes filling the rooms.

‘The room was filled with bikes,’ Feliciano remembered. ‘I said, ‘God forbid there should be a fire. How would you get out?’

‘God forbid, I predicted it,’ Feliciano said after the fire.

Three other residents suffered life-threatening injuries and four others were hurt, Ajello reported.

FDNY officials have reported 93 fires caused by lithium bike batteries this year, more than double 2020’s total of 44. The fires were blamed in the deaths of four people, with 73 others injured. 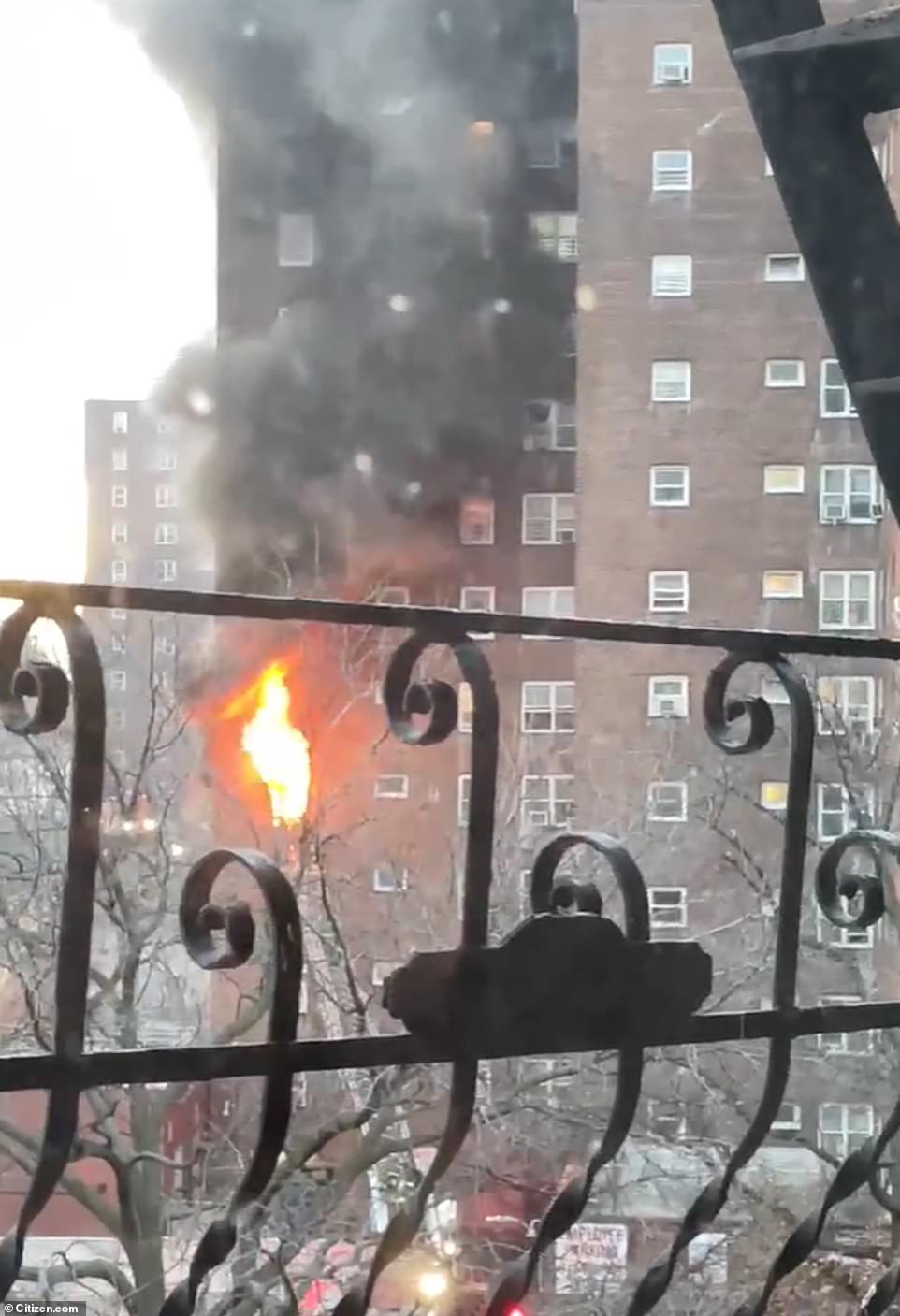 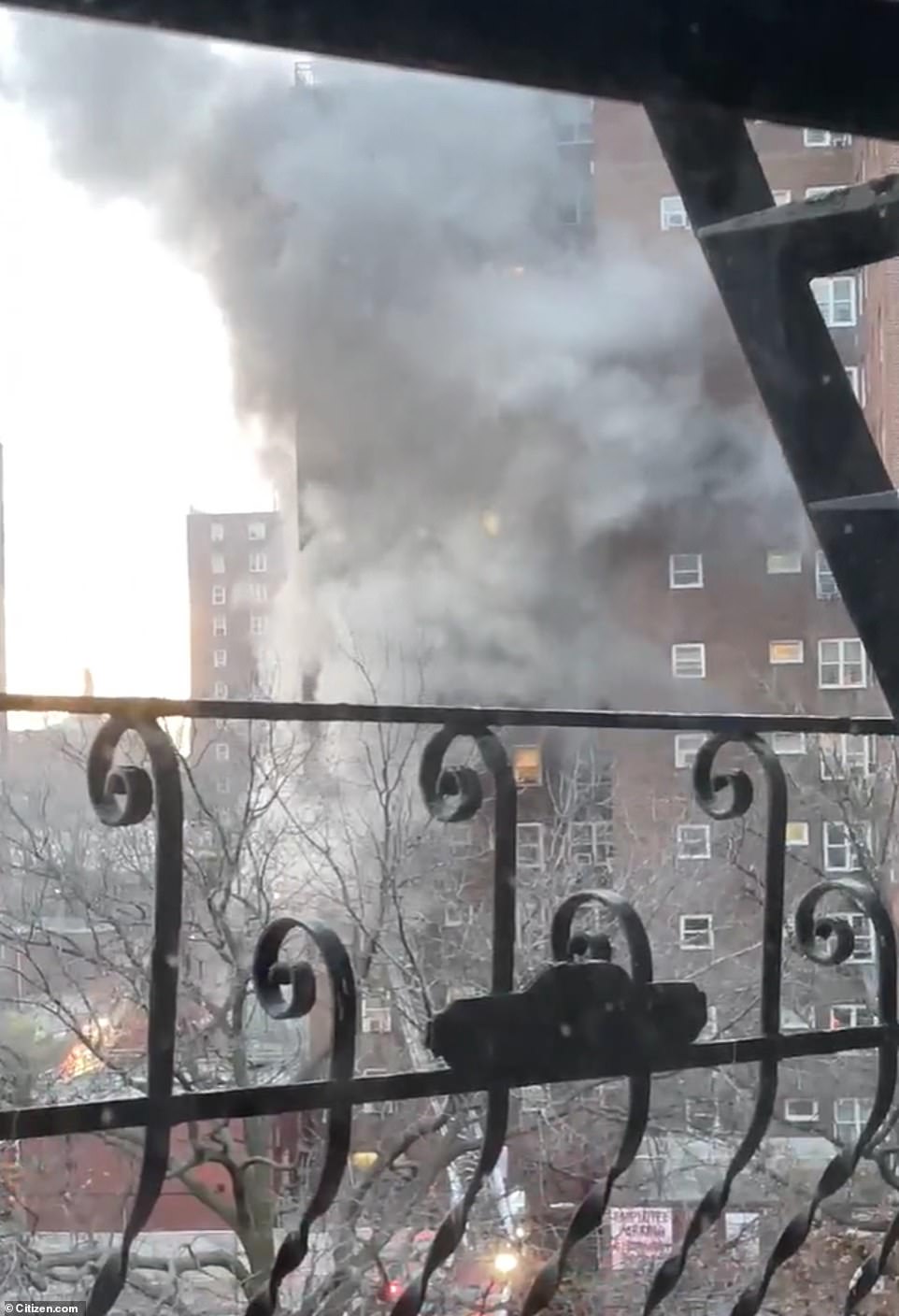 The fire left a man dead and a woman in critical condition. Neighbors reported that the woman is the teens’ mother and the deceased man was her boyfriend 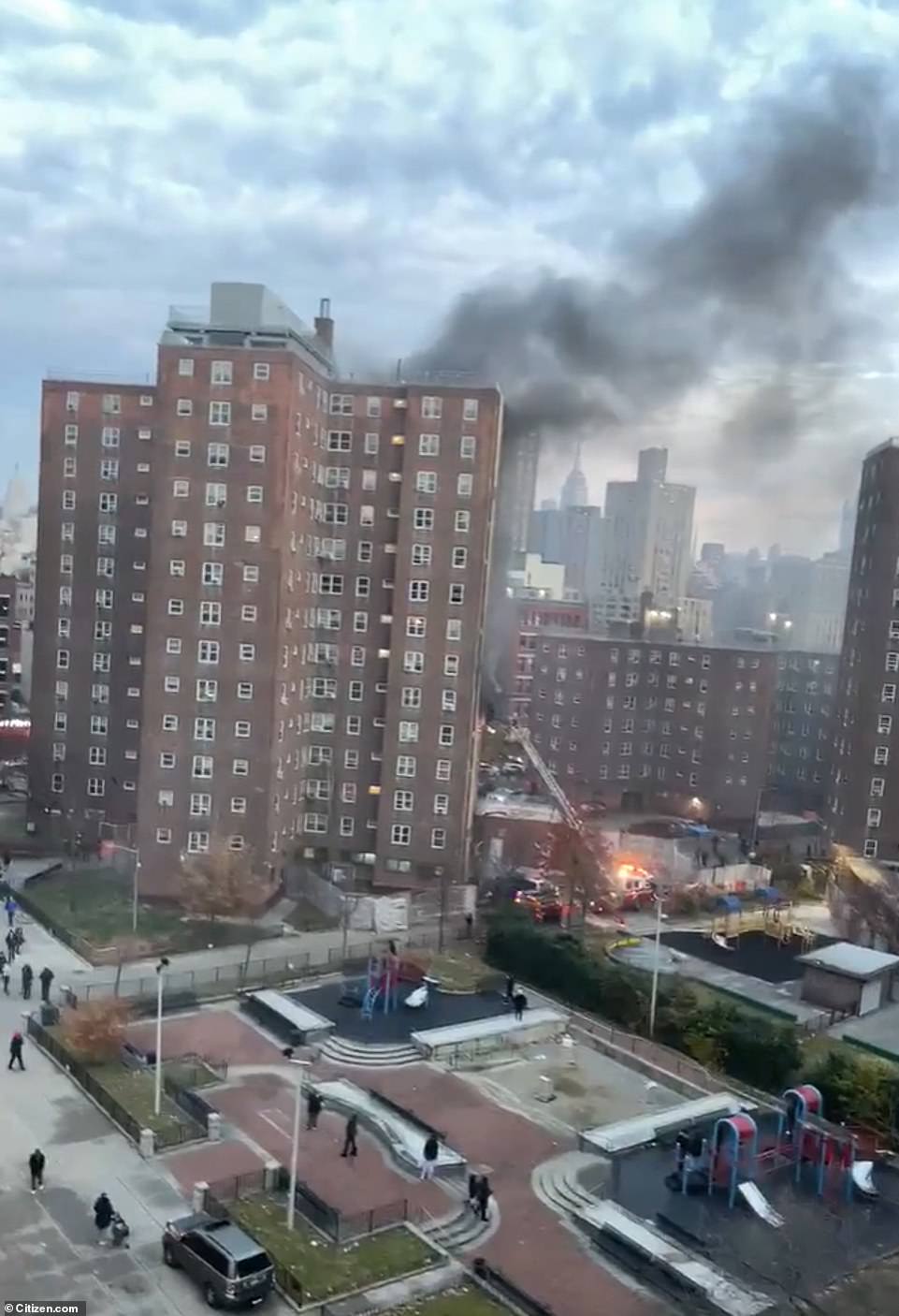 The fire remains under investigation but is speculated to have been caused by ebikes that filled the apartment, according to neighbors

The unidentified man killed in the blaze at the public housing complex was the fifth fatal fire victim in a 28-hour stretch.

A 66-year-old unnamed man died at the BronxCare Health System after a fire inside NYCHA’s Butler Houses on Webster Avenue in the Bronx. The fire on Wednesday afternoon was caused by careless cooking, fire officials confirmed.

Earlier that morning, 81-year-old Edgar Perez and his spouse Margoth, 75, were found unconscious and unresponsive after a fire broke out inside their fourth-floor apartment in Flushing, Queens.

The 4:30 am fire that killed the couple was caused by overloaded or faulty extension cords, fire officials reported. They also did not have a fire alarm in their home.

Less than an hour before that, Shamel Babb, 27, was found dead inside his third-floor apartment at the NYCHA Brevoort Houses in Brooklyn. Fire officials confirmed the fire that broke out around 3:45 am was caused by careless cooking.