Dmytrivka, Ukraine: In his first look at a destroyed Russian tank earlier this month, Serhii Grishin peered at the clumps of flesh in the armoured tomb and noted what he didn’t feel.

Grief already poured from him over dead Ukrainians and he couldn’t spare any more for a soldier in an invading force. Instead, the rusted out vehicle and what was in it – the inevitable end product of the failed assault on nearby Kyiv – made his spirit soar, he said.

This time, he brought friends to record the moment. 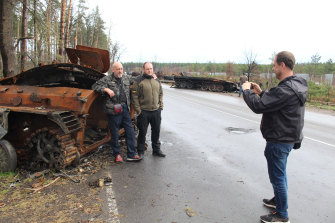 Serhii Grishin takes a photo of his friends next to a destroyed Russian armored personnel carrier in Dmytrivka, Ukraine, on April 26.Credit:Alex Horton/The Washington Post

“I’m happy to see that they did not advance farther down the road,” Grishin said Tuesday, as his friends took photos of a ghostly personnel carrier, also destroyed by Ukrainian forces. “I hope there are more places with destroyed Russian equipment.”

Ukrainians who fled intense fighting around the capital have packed highways to return to their homes after the Russians withdrew to redeploy in the east, creating traffic bottlenecks worsened by checkpoints and destroyed bridges. Adding to the logjam are the newest roadside attractions awaiting the returnees: columns of sliced-open and fire-mangled Russian vehicles, dripping with rain and ringed by the detritus of battles that raged through March.

Visiting the pop-up museum pieces has become something of a cathartic release for civilians picking up the fragments of their interrupted lives, rummaging through the physical evidence of a war of aggression with a sense of relief and exhausted pride that Ukraine, for now, has forced Russia out of the Kyiv region. 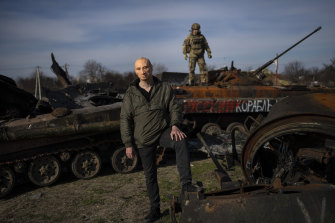 A man wearing a Vladimir Putin mask poses for a picture in front of the ruins of a Russian tank near Bucha. Credit:AP

That feeling has manifested itself in a stream of selfies atop Russian T-72 tanks shorn of their turrets and armoured personnel carriers blown in half. Like the wartime version of the world’s largest ball of twine, the vehicles are a constant draw, as drivers navigating the suburbs of Kyiv pull over for the perfect Instagram shot.

Victoria Yarmuska, a Bucha resident who fled the fighting early in the war, was told by neighbours her house had survived the shelling that ripped apart much of the town. Before she saw her home, though, she picked through a half-dozen charred vehicles with her husband, Igor, and they took photos of each other.

“It feels like I’m watching a movie, a really scary movie,” she said. “Looking at all of this with my own eyes, I start to realise it’s reality.”

That reality is what many people sought to capture as they trudged through mud pockmarked with shrapnel and tatters of Russian uniforms. Karolis Kairys, a friend of Grishin’s, was visiting from Lithuania to oversee a vehicle delivery that he helped organize through his car enthusiast club for the Ukrainian military. 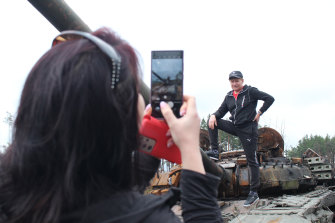 He was adamant about sharing his photos on Facebook, he said, because some of his friends are sceptical that Ukraine had scored battlefield successes. “They still believe Russian propaganda and think that it’s not tanks, that this is all staged,” he said. The US-provided Javelin antitank missiles “are working good,” he said with a laugh.

“It feels like I’m watching a movie, a really scary movie.”

Others surveying the vehicles were contemplative about what happened on the shoulder of this road. Ukrainian soldiers who pointed out details to reporters on an earlier visit said one of the vehicles, a T-72 tank, was blasted apart with an RPG from a tree-lined stretch of road on the right, suggesting an ambush that widened into an onslaught.

Mykhalio Kalyniuk, who has traversed the eastern Donbas on volunteer work, said his heart raced as he strolled through the wreckage, thinking of how the trees splintered apart in heavy barrages.

“It’s hard to imagine how many people lost their lives to make this one thing happen,” he said. “I think someone scarified their life to not let these tanks enter Kyiv.” The site could be preserved as a testament to those Ukrainian losses, he said, before bending over to pick through the soil next to a vehicle. He palmed three rifle bullet casings and rubbed his fingers over them as if they were shells found on a beach.

Destroyed Ukrainian equipment is much harder to find. The military has focused on recovering its own vehicles to repair them or strip them of usable parts, but also to minimise the visibility of its own losses, leaving Russian vehicles the primary draw for passersby.

Many Russian vehicles have been removed, especially on highways to help alleviate the flow of traffic. But others remain after heavy equipment has been committed to repairing roads and to the war effort in the Donbas region. And it has become an issue of space, officials have said; salvagers are simply running out of space to dump destroyed cars and other vehicles and must carve out new boneyards.

In nearby Hostomel, the scene of some of the closest combat in a fight for the airport there, a destroyed Ukrainian tank sat nestled next to a blown-out shop, perhaps fired upon after the crew tried to conceal it in an alley. Some Ukrainians have confused it for a Russian vehicle after noting that the two countries use many similar tanks and that few of their own military’s vehicles are still around. It appeared someone made an effort to dispel the confusion by taping a Ukrainian flag to it.

Word got around, and few people approached the tank on Tuesday. Roman Diachuk spotted the tank and arrived to take photos with his friends until he realised it belonged to his own military. He lowered his camera. 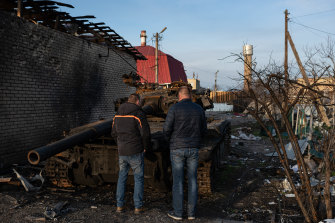 In Hostomel, where two men examine a burnt out tank, onlookers have regularly confused Ukrainian tank ruins with Russian ones. Credit:Getty

“We understand that maybe some of our soldiers died here,” he said, adding he was glad the Russians were pushed out of the area. “We are sorry for the loss of human life, but that was their decision to come here.”

Just as the vehicles lie where they were destroyed, so, too, do Russian soldiers themselves, their eyeless bodies dripping with spring rain long after they were abandoned by their retreating comrades.

Bands of Ukrainian soldiers hauling Javelins and British-made antitank weapons traversed the forest hunting for Russian armoured vehicles near Teterivske, a small village northwest of Kyiv bombarded by Russian airstrikes. They destroyed several, the soldiers said in interviews, then melted back into the forest.

“We are sorry for the loss of human life, but that was their decision to come here.”

The Russians left several vehicles behind and at least three of their dead.

One of the bodies is burned so badly it could be mistaken for a log charred by a forest fire. Another soldier nearby has boots on his feet and white ear buds at his side. A Ukrainian soldier said he had been shot through the heart.

No one has lined up to see the bodies.