Paris: A vegan restaurant has made gastronomic history by becoming the first of its kind to win a Michelin star in France. 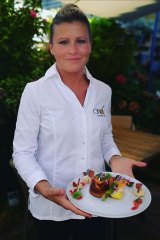 Claire Vallée's restaurant ONA – Origine Non Animale – is one of no more than a dozen vegetarian Michelin-star winners worldwide, according to Gwendal Poullennec, the guide's general secretary.

"We have 3300 restaurants in the French guide, some vegetarian, but only one truly vegan one," he said.

ONA, in Ares, near Bordeaux, this week became one of 54 restaurants to join the one-star category, signifying "a very good restaurant" in this year's edition of the hallowed food bible. Only two new restaurants received two stars and just one the maximum three. Sadly for Vallée, her restaurant is closed due to the COVID pandemic.

Along with the classic star, ONA also received a green star, which the food guide introduced only last year to reward sustainable gastronomy. 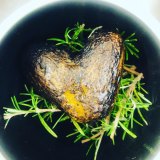 A sampling of the cuisine at ONA.Credit:Instagram

In a nation famous for its meats and cheeses, offering an all-vegetable menu may sound like a recipe for disaster.

Indeed, when Vallée decided to open her restaurant four years ago after falling in love with vegan cuisine in Thailand, she hit a wall of resistance.

The chef was laughed out of the bank when she first sought a loan, particularly as she was setting up shop on the Atlantic coast, famed for its array of seafood, including oysters.

"They said the prospects for veganism and plant-based food were too uncertain," she said. However, she bypassed the banks via crowdfunding and proved them wrong.

"It's true that veganism and vegetarianism have not been part of our food culture, and animal products have pride of place," she said. "But things have changed a lot in four years – as this star suggests. The French are taking increasing care about what they eat, and vegan cuisine is part of this."

Working with seasonal, organic and local produce, she grows 140 varieties of edible plants in her "green terrace" for dishes that include "hot and cold asparagus with grapefruit and Timut [a peppercorn] with sweet potato gnocchi. "We can really feel people are curious," she added. "We have even had hunters say they enjoyed it. I hope other chefs take heart from this."

Some French food critics and restaurateurs agreed that the star was a positive step for the cuisine.

"It is often linked to restricting oneself but increasingly that's no longer the case," said Thibaut Danancher, food critic at Le Point magazine. "It can offer all the gourmet pleasures of the table and has its place in our food culture."

But not all agree. Meat-loving chef David Rathgeber runs the Assiette restaurant in Paris and has a podcast called Here We Don't Suck Leaves.

"My customers are no vegans, that's for sure," said the cook whose signature dishes include cassoulet (a meat and bean dish), duck tart with foie gras and stuffed partridge.

"I've nothing against vegan cuisine. What I can't stand is cuisine that's about appearance more than taste with no juice or sauce, no gourmandise, emotion or coherence."

Food critic Emmanuel Rubin, who co-founded Le Fooding, an alternative restaurant guide, said France had "a lot of catching up to do". "Culturally we are behind the curve. For years most vegan restaurants were frankly poor and you came out thinking this is worse than the canteen."

But with meat consumption falling by 12 per cent in a decade, a growing number of chefs are adopting vegetarian and even vegan dishes.

Taking a swipe at the revered guide, he said: "Better late than never, but Michelin is yet again months, seasons or years behind. It's proof it's close to being comatose.

"I eat out six times a week and can say that there are quite a few vegan restaurants deserving stars or at least to be in the Michelin guide.

"One address is not nearly enough. It's not a revolution or even evolution; it smacks of brazen opportunism."

But Michelin's Poullennec hit back.

"We don't have quotas for women or vegan restaurants," he said. "This is not a political act, it's just a well-deserved award for talent and quality cooking."