Victoria recorded zero locally-acquired cases of coronavirus on Sunday, meaning the state has achieved an 11-day run without any community transmission.

However, there were seven cases detected in hotel quarantine, up from three the day before. More than 11,000 tests were completed on Saturday, according to the Department of Health and Human Services. There are now 30 active cases in the state. 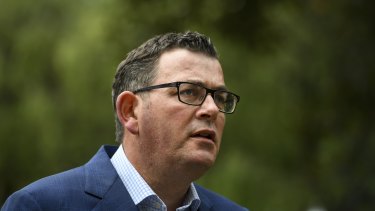 Premier Daniel Andrews has announced Victorians in Brisbane will be allowed to return home after more than a week of travel blocks.Credit:Penny Stephens

The figures come after the Australian Open was rocked by positive COVID-19 cases onboard two chartered flights ferrying players and officials into Melbourne. Three cases detected yesterday (two Australian Open participants who are not players and one crew member) mean nearly 50 tennis stars won't be able to train in the weeks leading up to the event and will have to spend the next 14 days confined to their hotel rooms.

It is not yet clear exactly how many hotel quarantine cases from Sunday are linked to the Australian Open. The competition, which is set to be held in mid-February, was already under fire for bringing hundreds of overseas players and officials into Melbourne at a time when there are strict caps on international arrivals and many Australians are still stuck overseas.

But there is some good news for Victorians trapped interstate. As of last night, people can now travel to Melbourne from greater Brisbane's designated 'orange' zones. Returning travellers must have a permit and self-isolate until they return a negative COVID test.

Meanwhile the Victorian government plans to roll-out the Pfizer vaccine in mid-February. The DHHS hopes to deliver 15,000 doses of the vaccine every week during the first phase of the roll-out. Hospital staff, aged care workers and residents and those helping to manage Australia's borders and quarantine system will be the first to get the jab. India has already kicked-off its immunisation campaign, which is set to be one the world's largest.

The federal government will also charter 20 repatriation flights to bring stranded Australians home. This comes after Emirates suspended all flights to and from Melbourne, Sydney and Brisbane due to national cabinet's decision to reduce the caps on international arrivals.