Victorian teachers have vowed to strike in term one next year, forcing students to miss out on class time, unless the Andrews government agrees to its demands for higher pay and lighter workloads.

The Australian Education Union – which represents government school teachers – has warned the government that it will escalate its industrial campaign with a 24-hour stop-work and mass gathering early next year if a new agreement has not been signed. 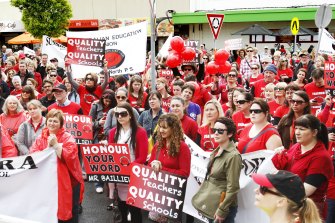 Victorian teachers last took strike action in 2012-13, but have threatened to do so again early next year unless the Andrews government meets their demands. Credit:Scott McNaughton

A motion passed by the union’s joint primary and secondary schools council on Friday determined to take the single-day strike in term one 2022, and to consider further stoppages.

“Whilst sufficient progress has been made to date to warrant ongoing negotiations in good faith with a view to try to reach agreement, Joint Council notes that, to date, DET [Department of Education and Training] have not adequately addressed the union’s log of claims,” the motion stated.

“If the campaign needs to be escalated, a 24-hour stopwork, with then intention to hold a mass meeting … will be authorised to be held in term one 2022.”

It would be the first strike by Victorian teachers since 2013 and the first targeted at the Andrews government. The union’s determination follows a one-day strike by government school teachers in NSW a week ago, also over pay and conditions.

The union launched its log of claims in April and has been negotiating with the Victorian Department of Education and Training for almost eight months.

Its key claims include a 21 per cent pay rise over three years, plus 16.5 per cent superannuation, significant cuts to face-to-face teaching hours and smaller class sizes.

The union’s campaign has focused on complaints that teachers are increasingly overburdened by excessive workloads because of chronic funding shortfalls in the public education system.

A television advertisement, launched this month, notes that “Victorian public school students are the lowest funded in the country, $1354 behind the national average.”

The union has already “banned” Andrews government MPs from public schools, threatening that all its members on-site would immediately stop work and rally at the school gates to deny Labor any promotional opportunity if an MP tried to visit.

Other measures being taken include a partial ban on responding to the Department of Education and Training’s emails, and a ban on sitting the NAPLAN online school-readiness test, which is an essential part of transitioning the standardised test from paper to online.

Tomorrow is the deadline set by the Victorian Curriculum and Assessment Authority for students at schools that have not yet switched to NAPLAN online to have done the trial test.

The Department of Education and Training was contacted for comment.