Children could pay half as much as adults for breaching COVID-19 rules and people will be able to appeal against their penalties to a new fines review officer under changes to the Andrews government’s state of emergency bill.

The government has won the support of the Greens, Reason Party MP Fiona Patten and Animal Justice Party MP Andy Meddick to extend the emergency declaration until December. Health Minister Martin Foley was negotiating with the crossbenchers until late Monday night. 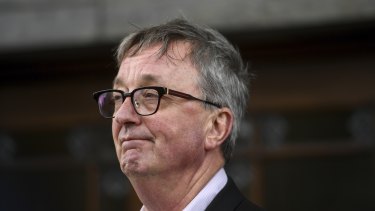 The opposition and some crossbenchers had demanded the government extend the emergency powers – which allow for the imposition of mask-wearing and quarantine for returned travellers – for less than the proposed nine months.

But government amendments to the bill, to be debated in the upper house on Tuesday, do not detail any change to the nine-month proposal, and the Greens confirmed the party would back a nine-month extension.

Leader of the opposition in the upper house David Davis said the crossbench had “sold out” and handed “extreme power to Daniel Andrews until Christmas”.

As part of the government’s negotiations with crossbenchers, it will seek to establish a Detention Review Officer who would aim to review fines within 24 hours of someone requesting a review.

In a statement the Greens said they had secured a commitment for Fines Victoria to review all penalties for disadvantaged Victorians. They said the government agreed to the party’s demand to give people the right to appeal detention orders, as recommended by the Victorian Ombudsman in its review of the public housing tower lockdown.

“While COVID is still a risk in the community we must continue to keep people safe, but that shouldn’t come at the expense of people’s democratic rights and rights to social justice,” Greens leader Samantha Ratnam said.

“That’s why the Greens will support a nine-month extension to the state of emergency, on the proviso that we work on new laws that mean this is the last time the state of emergency is used for COVID in Victoria, and on the condition that the government reduces fines for young people and implements important recommendations from the Ombudsman’s inquiry into the public housing lockdown.”

Earlier this week, The Age reported that Ms Patten had agreed to extend the state of emergency powers for three months, but she wanted the government to implement a “traffic light” system before announcing a statewide lockdown, enshrine the “right to protest” in the amended bill and accept the recommendations of the Victorian Ombudsman’s report into the lockdown of the public housing towers last year.

The lower house, where Labor commands a majority, last week passed legislation to extend the state of emergency powers for a further nine months until December 15.

But the government must broker a compromise in the upper house, where it requires the support of at least three crossbench MPs to pass the Public Health and Wellbeing Amendment (State of Emergency Extension) Bill.

In September Ms Patten, Mr Meddick and Ms Ratnam voted with the government to extend the state of emergency powers until March 15, but have all refused to support Labor’s current bill.