Home » ‘We’re running out of space’: Turf wars heat up over synthetic grass

Port Phillip Baykeeper Neil Blake has a portable cooler full of fake grass tufts that have blown from a synthetic oval in Melbourne’s north and could have ended up in Darebin Creek.

He’s been trawling two sites next to a hockey field on Plenty Road, Kingsbury, since October to collect the plastic with a dustpan and bucket while the synthetic grass at KP Hardiman Reserve was replaced. 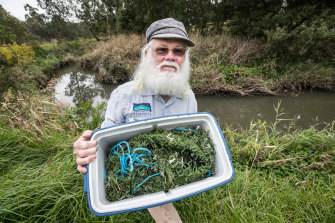 “If I was to go and drop that on the front steps of the town hall, I’d be held liable and probably fined for it,” Mr Blake said, noting the plastic run-off had slowed down.

On the worst days, after strong winds, Mr Blake found 300 to 400 tufts of plastic grass in 90 minutes of trawling.

All of that could have eventually drifted into Port Phillip Bay where he happened to find a small square of artificial grass — plastic rubbish — in the sand of St Kilda Beach. 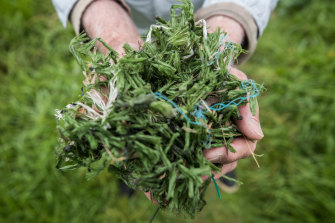 The environmental effects of artificial grass have sparked debates in local councils.Credit:Jason South

Fake grass has its upsides: synthetic ovals don’t need to be watered, it doesn’t need mowing or herbicide and can endure at least twice as much sport than natural grass, making it attractive to councils to accommodate growing populations.

However, critics say it overheats, leaches rubber and plastic into waterways, releases carbon and potentially other toxic gasses, ends up in landfill, reduces biodiversity for insects and birds, and limits the amenity for families and dog owners.

On Wednesday night, Moreland Council voted down a suggestion from Greens councillor James Conlan that council should investigate its impacts.

His motion follows a turf war at Hosken Reserve in Coburg North, part of which the council hoped to fit with synthetic turf. Community consultation has begun, belatedly, to decide what to do with the oval. 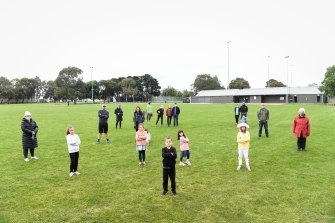 Locals at Hosken Reserve in Coburg North, who don’t want it covered in synthetic grass.Credit:Justin McManus

A similar conflict played out in Boroondara, where the council decided not to lay fake grass at Dorothy Laver Reserve.

Lou Tona, president of Pascoe Vale FC, said synthetic grass was needed to keep up with the demand for sports fields and he hoped it could be managed with the best environmental practices.

“We’re running out of space,” Mr Tona said. “We’ve got more kids playing than ever.“

Football Federation Victoria said it would need to find 199 new full-size pitches in the eight years from 2018 to accommodate the increase in soccer players in metro Melbourne. Every synthetic pitch is worth two natural grass ovals. 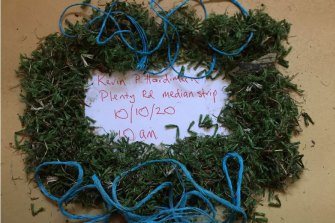 The AFL and Cricket Australia have also been working on synthetic fields to meet demand, with AFL Victoria in 2011 saying “land for sports use is hard to find” as populations grow.

It poses a conundrum for councils who need to support community sport as well as passive park users.

Cr Conlan argued it all came down to a state planning failure — that synthetic ovals wouldn’t be needed to sustain twice as much sport if there was enough open space for everyone. 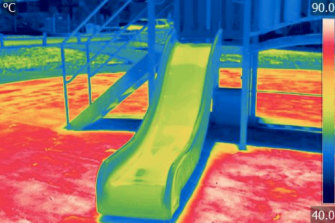 “I think we can minimise the tension between [passive park users and organised sport] by simply investing in more parks.”

Cr Conlan stressed he backed community sport and acknowledged there would always be a place for synthetic grass. But he said there were major questions that needed to be settled before its widespread use.

Sebastian Pfautsch, from the University of Western Sydney, specialises in the impact of rising temperatures in urban environments.

“Synthetic grass is one of the hottest if not the hottest material that I find in public place spaces during summer,” Dr Pfautsch said.

Unshaded plastic grass gets so hot there are already summer days that are unsafe for sports, which is likely to become more frequent as climate change worsens.

During a heatwave in January 2020, Dr Pfautsch measured temperatures in the high 90s in an unshaded synthetic grass playground in western Sydney.

On a 28 degree day, natural grass in the sun would get to 30-32 degrees while synthetic grass might reach 70-75 degrees (depending on wind, humidity and the type of infill used in the fake grass).

It also radiates heat at night, and could raise the air temperature by two to three degrees, compared to natural grass which has a cooling effect.

Comparatively, some argue synthetic grass is drought-proof because it doesn’t require irrigation and would be easier to manage in a warming climate.

His counterpart in Victoria, Richard Wynne, hasn’t committed to doing the same.

Darebin mayor Lina Messina said a curtain had been installed at the boundary of Darebin Creek to collect windblown items, which are also being picked up and swept, from KP Hardiman Reserve.

The synthetic grass was 12 years old and will be repurposed at schools and golf courses, and the new field uses at least 95 per cent reclaimed tyres, recycled soft plastics and recycled glass.