Berlin: Germany is applying pressure on its citizens to get COVID-19 shots, announcing plans to restrict many leisure activities for the unvaccinated in almost the entire country.

Chancellor Angela Merkel presented a catalogue of measures on Thursday (Friday AEDT) that will allow access to restaurants, bars and public events in areas with high hospitalisation rates only for people who are vaccinated or have recovered. While avoiding a renewed lockdown, it’s the latest attempt by leaders across the European Union to stem a surge of infections.

Greece also expanded restrictions for unvaccinated residents on Thursday, while the Czech Republic and Slovakia imposed expanded bans. The Netherlands resumed a partial lockdown last week and Austria is using police checks to deter people from breaching its vaccine requirements. 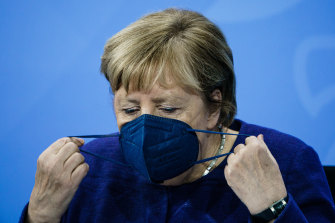 Chancellor Angela Merkel takes off her face mask during a press conference after meeting State Premiers and the acting Chancellor on the coronavirus situation.Credit:Getty Images

“We are in the midst of the fourth wave and have to deal with a dramatic situation and draw the needed conclusions,” Merkel told reporters after a meeting of national and state government leaders.

Extraordinary measures “are necessary and justified,” the leaders said in a statement. They’ll apply to a broad range of activities and venues from sports and cultural events to restaurants, bars and gyms.

Germany, which is Europe’s biggest economy, reported more than 65,000 infections in a day for the first time on Thursday and hospitals faced with stretched intensive-care units are sounding the alarm. The changes, which include a requirement for employers to let employees work from home, replace emergency powers that will expire on November 25. 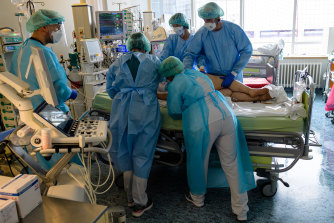 Doctors and nurses tend to a patient on the COVID-19 intensive care unit at University Hospital Leipzig, Germany, on Thursday.Credit:Getty Images

The rules kick in above a certain level of hospital admissions. Based on official data, almost all of Germany exceeds that level, which was set at three hospitalisations per 100,000 people on a rolling seven-day average. Business owners and event organisers face fines if they don’t enforce the restrictions.

The officials also agreed to resume free COVID tests, which were suspended during a relative lull in new cases.

“Vaccination was and is the way out of the pandemic, especially now,” according to the statement.

“We have never been as alarmed as we are now” and the news from hospitals is “super gloomy,” German media quoted him as saying during a panel discussion on Wednesday.

Germany’s Social Democrats, Green party and the Free Democrats, who are in talks to form a government to succeed Merkel’s centre-right administration, used their lower-house majority on Thursday to approve nationwide measures giving states a legal basis to impose restrictions.