Hanging over President Volodymyr Zelenskyy’s surprise trip to the United States on Wednesday is a growing Ukrainian fear: That Russia’s military — stalled by winter conditions, fierce opposition and its own weaknesses — may be laying the ground for a bold new attack.

The visit comes a day after Zelenskyy greeted troops in Bakhmut, a front-line city that Moscow’s forces have struggled to seize despite months of intense battles, while Russian President Vladimir Putin offered a rare admission of his army’s difficulties.

But beneath the frozen surface of the conflict — now past 300 days — officials in Kyiv have warned that the Kremlin plans a major new ground offensive this winter that could even target a second assault on the capital. The Russian leader’s pre-Christmas trip to neighboring Belarus only added to mounting speculation.

Zelenskyy will now meet with President Joe Biden and address Congress as his country hopes to not just shore up but secure greater support from its Western allies.

“Ukraine is very keen to step up and intensify the military support from the U.S.,” Frank Ledwidge, a senior lecturer of law and strategy at University of Portsmouth, told NBC News.

“We are in an ‘operational pause,'” in the conflict, Ledwidge added, “and Ukraine is worried because the war will be long and time probably really favors Russia.”

On Monday, Putin and his most senior advisers traveled to the Belarusian capital, Minsk, to meet authoritarian ally President Alexander Lukashenko, amplifying long-held fears that his forces could join a new offensive. 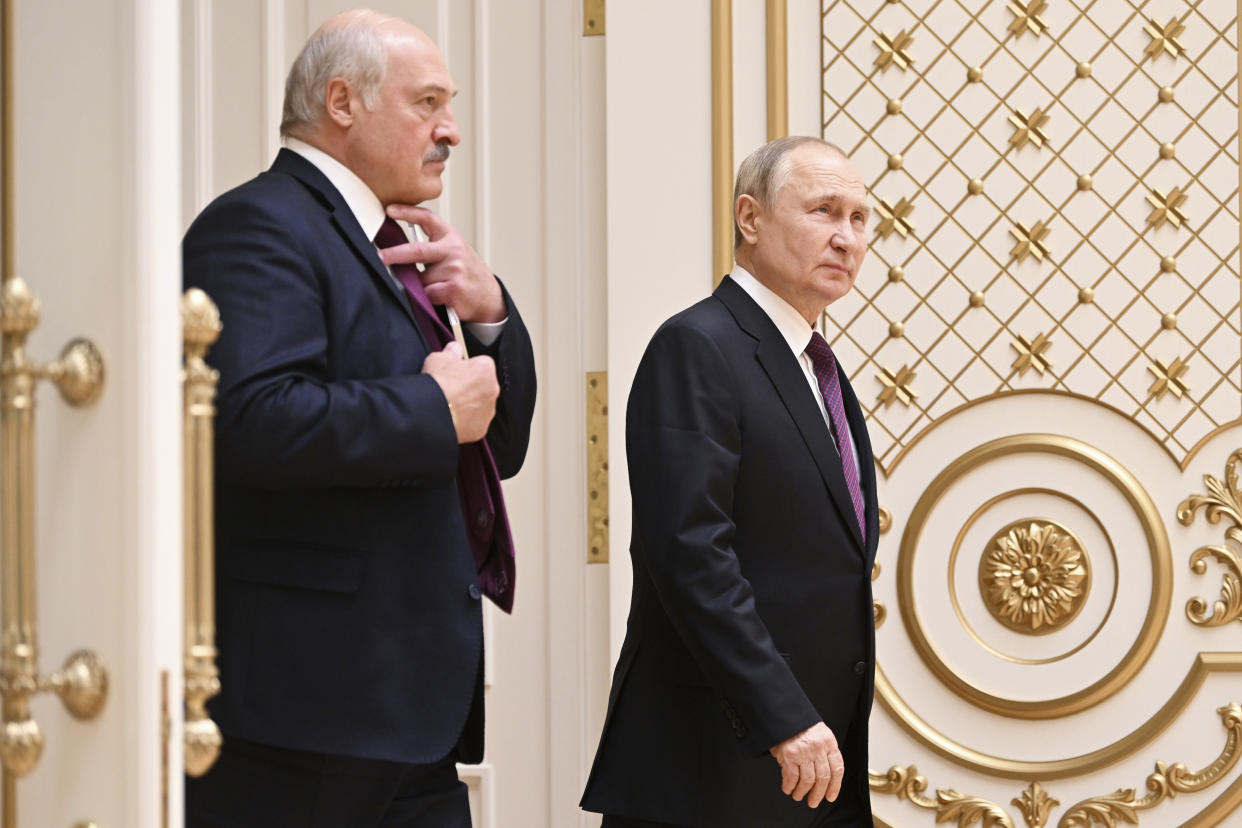 It comes after senior Ukrainian leaders told Western media outlets in a series of interviews over the past week that they are preparing for a new onslaught, after weeks of a battlefield stalemate in which Russia has bombarded civilian infrastructure and left parts of the country without power for long periods.

However, analysts say Belarus joining the war is unlikely and they are split on whether Ukraine’s latest warning of an impending Russian offensive is plausible or could be part of a broader messaging strategy.

“The [draftees] do a minimum of three months to prepare. It means they are trying to start the next wave of the offensive probably in February, like last year. That’s their plan,” he said.

Gen. Valery Zaluzhny, the head of Ukraine’s armed forces, told The Economist the same day: “The Russians are preparing some 200,000 fresh troops. … I have no doubt they will have another go at Kyiv.”

Zelenskyy’s visit would appear to fit in with the urgency of those warnings, said Ledwidge.

“Last week the military leadership of Ukraine asked for a significant uptick in the quantity of weaponry, which only the U.S. can supply. This week we have the political effort to try and clear the way for that,” he said.

In a call with reporters Tuesday night, a senior U.S. administration official described the visit as a chance to provide an “important injection of momentum and sustenance” to support for Ukraine.

Putin has spoken with rare candor about his military’s struggles in recent weeks, with the campaign stalled after being dealt severe blows by Kyiv’s recent counteroffensives. On Tuesday he said that the situation was “extremely difficult” in the four regions of Ukraine he claimed to have annexed earlier this year.

Asked whether anything positive could come from Zelenskyy’s trip to D.C. on Wednesday, Kremlin spokesman Dmitry Peskov replied simply: “No.”

Rather than planning a decisive new effort to change the shape of the war, Russia and Belarus were more likely getting together to discuss economic cooperation, said Samuel Ramani, an expert in politics and international relations at the University of Oxford.

“I think it’s much more likely the war is going to drag on in a stalemate with limited escalation,” he added.

Belarus was used as a staging point for Moscow’s full-scale invasion of its neighbor on Feb. 24, and it is a relatively straight shot north of Kyiv. While a second attempt to take Ukraine’s capital may seem outlandish, Ledwidge said a new Russian offensive of some kind did make sense.

By February the ground will have hardened again, he said, making it easier to conduct operations just as Russia’s reservists are trained and ready to go.

“That’s the point at which they may become capable of offensive action again, which they’re not now,” Ledwidge added.

Keir Giles, a Russia expert at the Chatham House think tank in London, said that predictions or denials of a new offensive were based on “whether people are applying Western standards of readiness” to Putin’s military.

“Russia has undertaken one wave of mobilization and is quite capable of undertaking more,” Giles said.

“We would be more likely to see a better-organized, even if low-tech, offensive from Russia in the early stages of next year,” he added.

Western allies, led by the United States, have provided billions of dollars in lethal aid to help Ukraine replace its largely Cold War-era arsenal. But calls for yet more accurate and far-reaching systems have continued — culminating in the United States’ decision to send Patriot air defense systems, which Biden is set to announce Wednesday.

Requests for ATACMS (Army Tactical Missile Systems), which would give Ukraine greater ability to strike targets within Russia and on the Crimean Peninsula, have been treated cautiously by U.S. officials over fears of wider escalation.

Some observers have predicted Ukraine could retake Crimea as soon as next summer — but others are expecting a much more drawn-out fight.