They are awaiting the arrival of baby number seven.

And Hilaria Baldwin put her bump on display as she spent Father’s Day with her husband Alec, 64, and their sons Rafael, seven, and Leonardo, five, in NYC on Sunday.

The star, 38, cloaked her burgeoning bump beneath a tropical print pink dress. 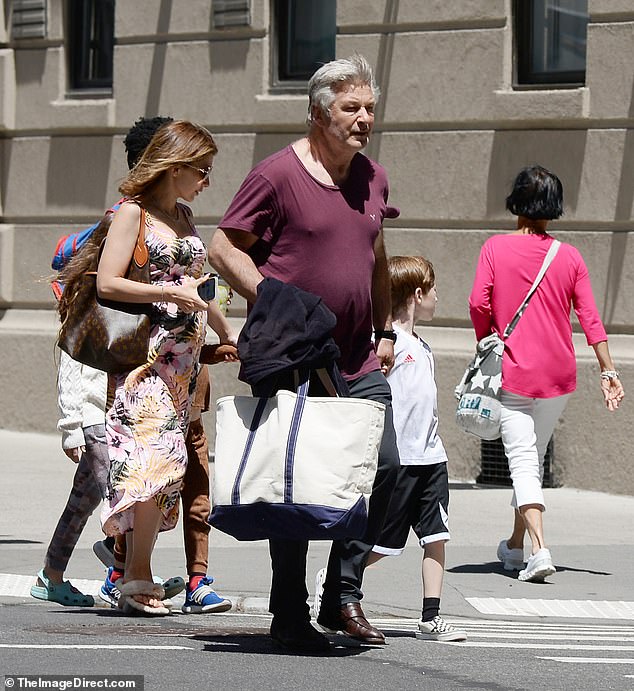 Bumping along just nicely! Hilaria Baldwin put her bump on display as she spent Father’s Day with her husband Alec, 64, and children in NYC on Sunday

Alec led the way for the family as they made their way across the street, his hands full with an assortment of belongings.

Hilaria kept it comfortable in fluffy baby pink slides wile adding a glam touch with her Louis Vuitton purse slung over her shoulder.

The next day Hilaria really put her bump front and center as she posed before her mirror in a photo posted to her Instagram Stories. 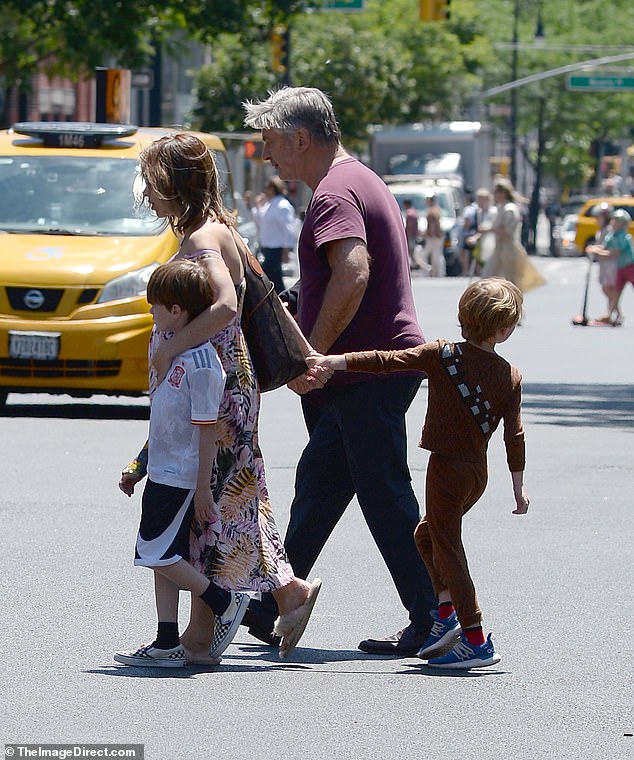 Hands-on parents! Hilaria doted on her children as they carefully crossed the street

In the snap, the mom-to-be gently rested her manicured hand atop her sweater-topped midsection.

‘And just like that, it was fall in June. And this pregnant mama is ok with a bit of cool,’ she wrote in the snap, along with a laughing crying emoji. 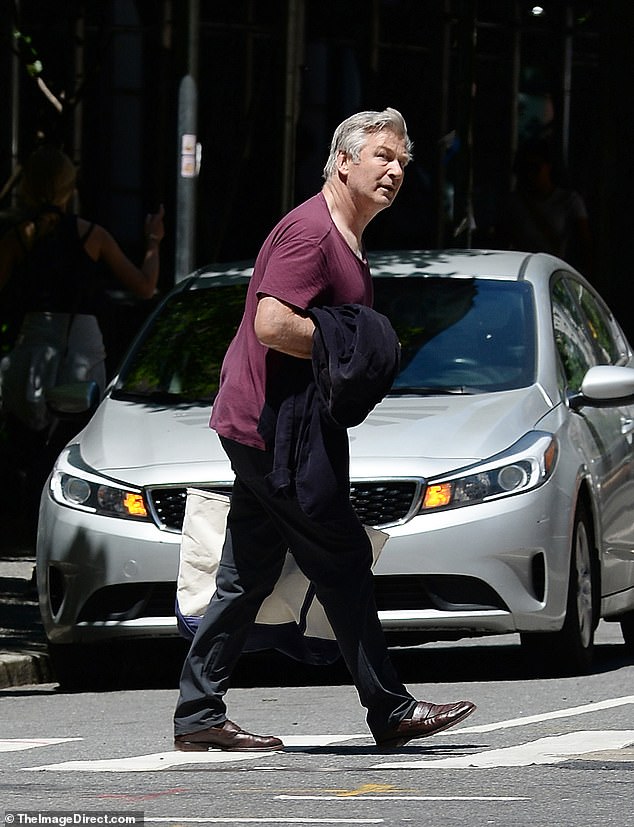 She posted a slew of snaps capturing their first moments with their four sons and two daughters.

Baby number seven was shown with Alec nestling his ear to Hilaria’s bump.

‘Happy Father’s Day to all the wonderful papas out there…and to you, Papa Baldwin. Here are his first moments with each of our children together….I’ll obvs share this one I’m cooking, when she’s well done…so her photo is a work in progress,’ she captioned the collage. 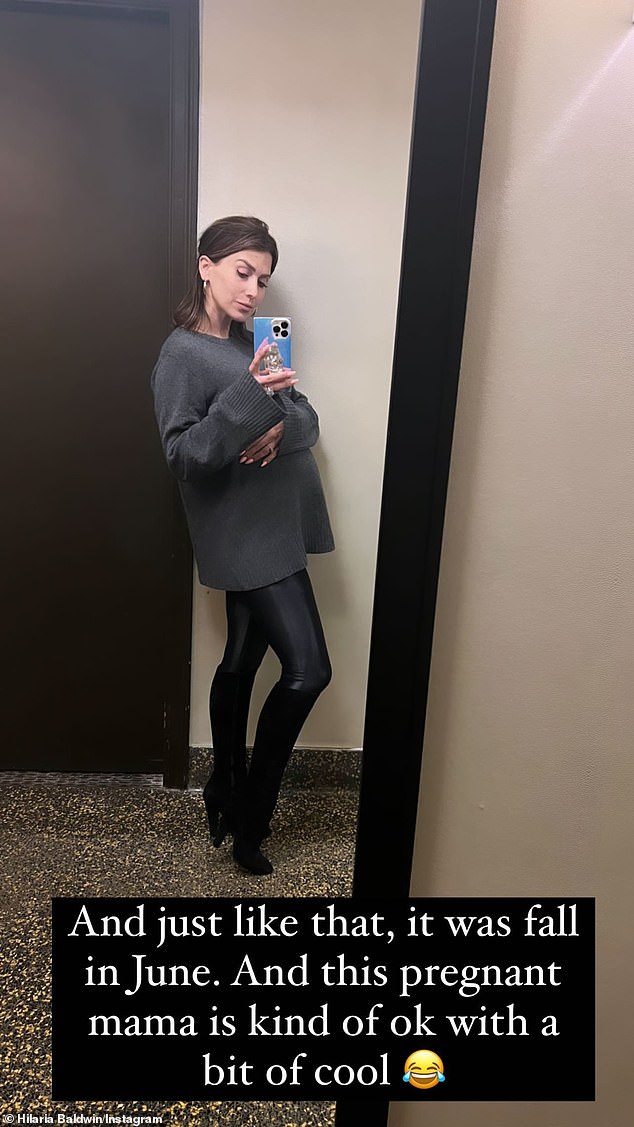 ‘Pregnant mama’: In the snap, the mom-to-be gently rested her manicured hand atop her sweater-topped midsection

In March, Hilaria confirmed that the couple are expecting another baby girl.

Alec also has a 26-year-old daughter Ireland, whom he shares with his ex-wife Kim Basinger.

Alec and Hilaria will be celebrating their tenth wedding anniversary on June 30. 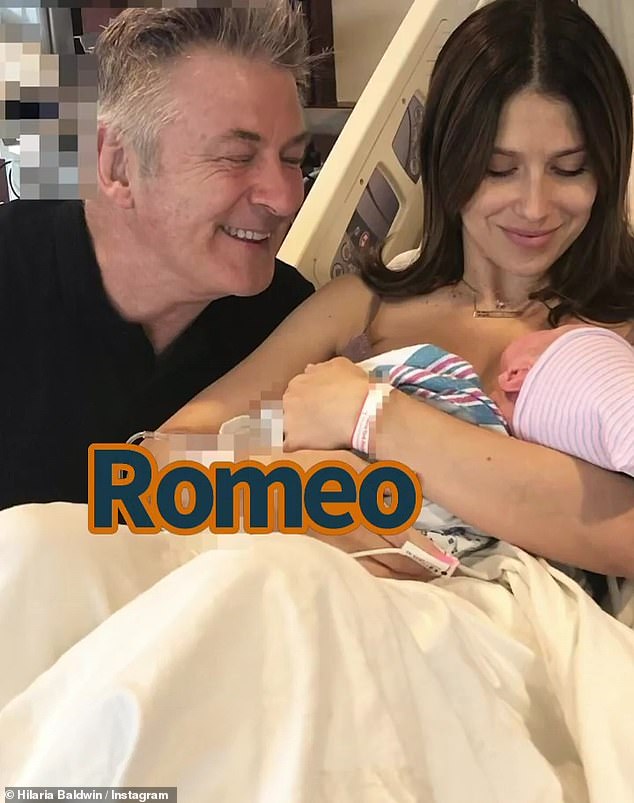 Happy Father’s Day! Hilaria celebrated her husband with a slideshow of their family