Andrea Bocelli, 61, goes shirtless as he soaks up the sun during a yacht day with his bikini-clad wife Veronica Berti, 36, and their family in Sardinia

He’s been enjoying some relaxing family time after revealing he had contracted and recovered from coronavirus in March.

And Andrea Bocelli decided to go topless as he soaked up the sun during a yacht day in Sardinia on Friday.

The Italian musician, 61, was joined on the trip by his glamorous wife and manager Veronica Berti, 36, their eight-year-old daughter Virginia and his two sons. 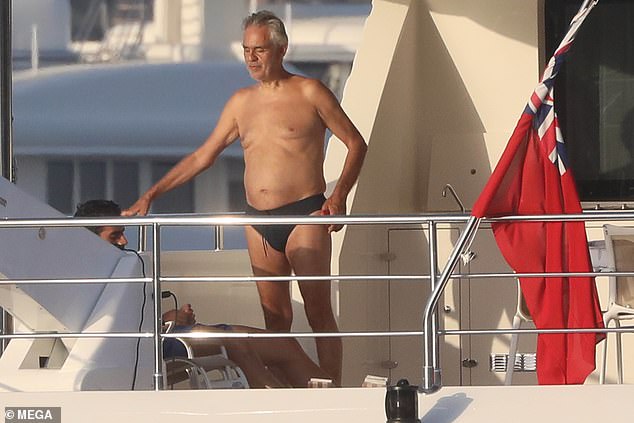 Family time: Andrea Bocelli decided to go topless as he soaked up the sun during a yacht day with his wife and children in Sardinia on Friday

During the outing Andrea was seen holding hands with his youngest child as they walked along the beach and also chatting to his older Amos, 25, and Matteo, 22.

His wife Veronica looked sensational as she showed off her sun tan in a bright yellow bikini and took a phone call while standing on the sandy shores.

It is thought that during the day trip Andrea’s dog may have escaped from the boat, causing the family to look for it on the beach.

The family were also seen enjoying some water sports with Amos and Matteo taking a red jet ski for a ride. 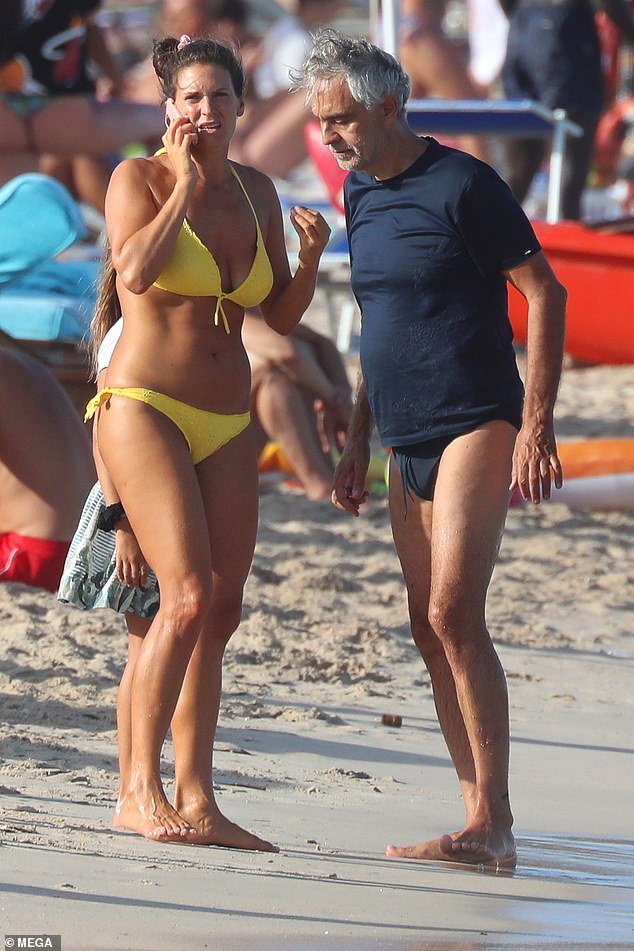 Wow: The musician’s wife Veronica looked fantastic in a yellow bikini as they strolled along the beach 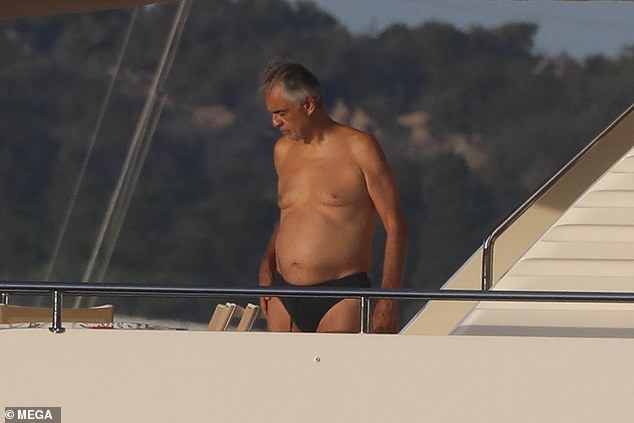 Relaxed: Andrea spent some time working on his sun tan from the deck of the yacht

Andrea and Veronica previously went on holiday to the French Riviera in July with their little girl Virginia and his sons from his first marriage to Enrica Cenzatti.

In May musician Andrea admitted he was a carrier of coronavirus, having contracted it – and recovered from it – in March.

What’s more, he is donating his blood plasma to researchers who are looking at effective ways to battle the illness. 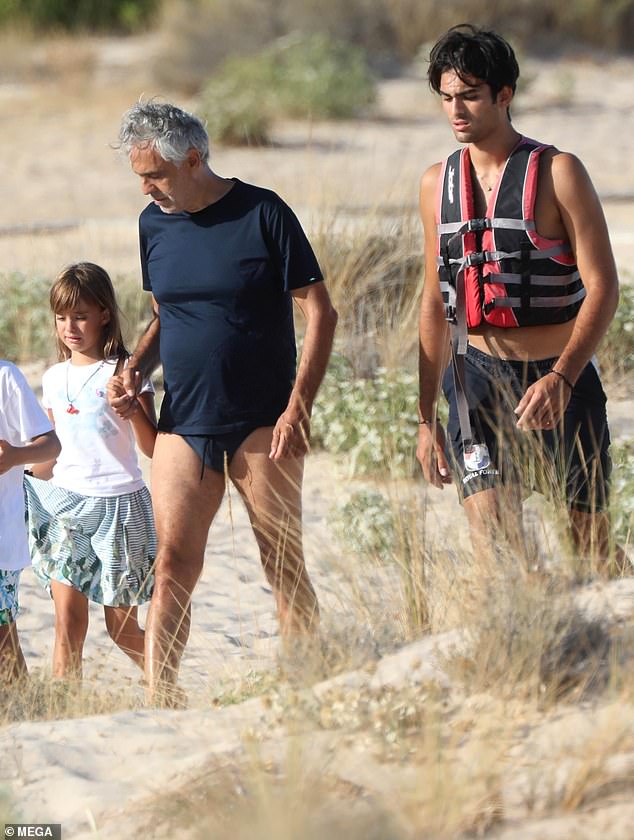 Trip out: It is thought that during the day trip Andrea’s dog may have escaped from the boat, causing the family to look for it on the beach (pictured with one of his sons and daughter) 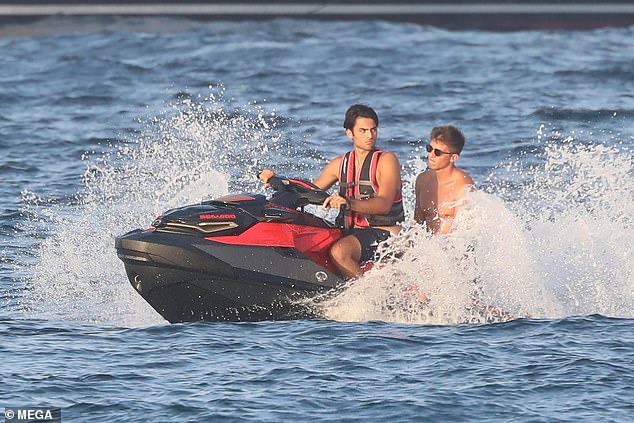 Water sports: The younger Bochelli men took to the waters for a spot of jet skiing on the trip 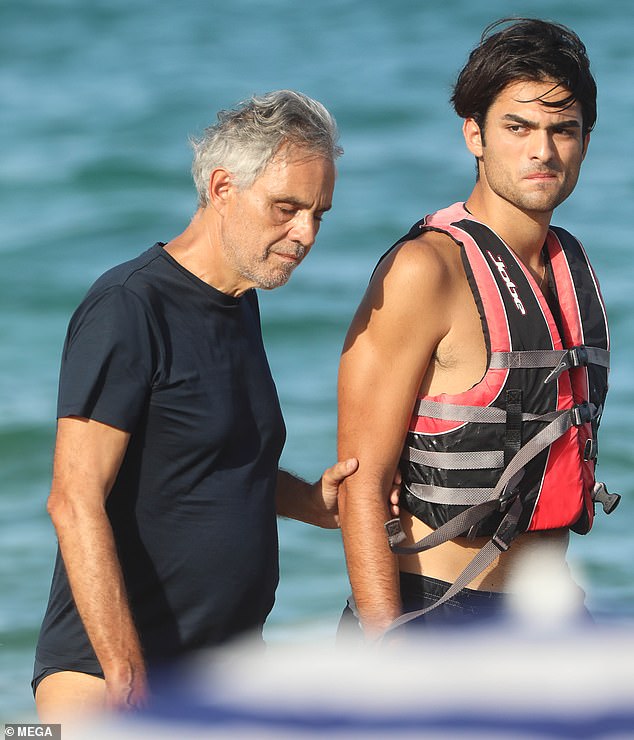 Father and son: Andrea held onto his son Matteo as they made their way back to the yacht

He told Good Morning America at the time: ‘The pandemic which has shaken the world has also affected — albeit mildly — me and certain members of my family.

‘Out of respect for those for whom contracting the virus has had more serious consequences, I decided it would be best not to share the news.

‘I certainly didn’t want to unnecessarily alarm my fans and also wished to protect my family’s privacy.

‘Given the chance to donate blood to help find a cure for COVID, my response was an immediate ‘yes’. A modest — but fundamental — gesture, through which I am playing my small part.’ 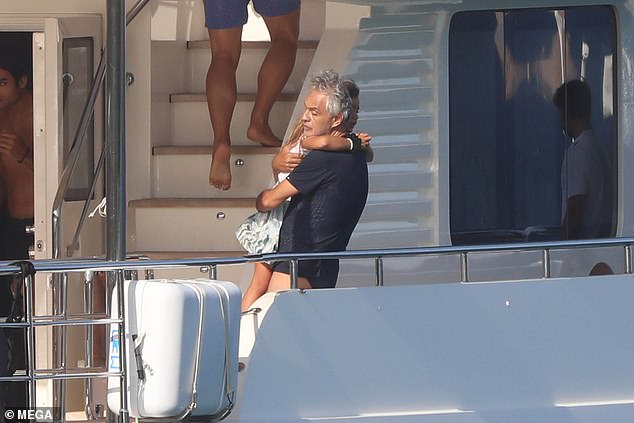 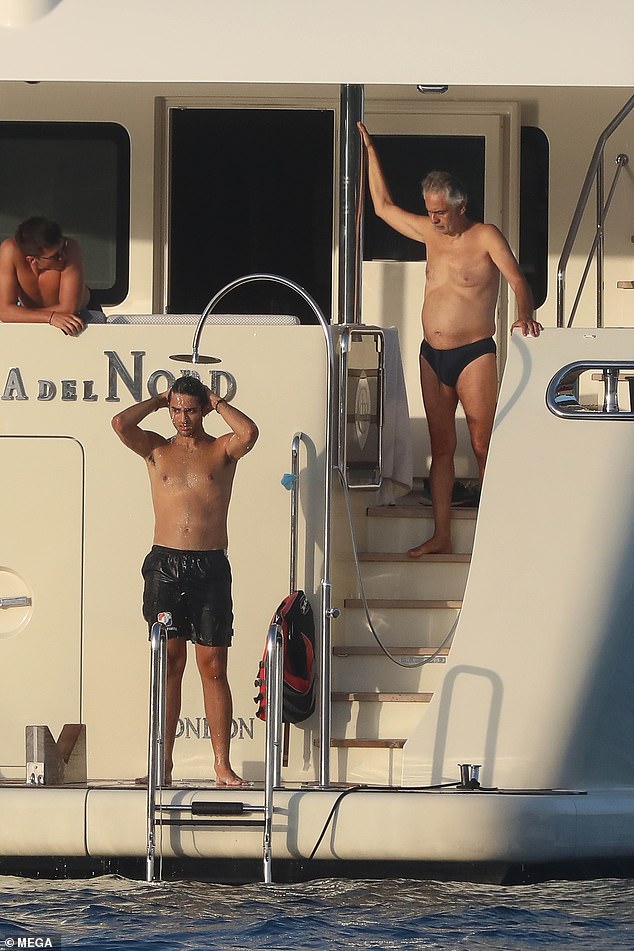 Cooling off: Andrea’s son were seen taking a shower after enjoying a dip in the water