Home » Celebrities » Cardi B apologises after being accused of cultural appropriation

‘Maybe I should’ve done my research!’ Cardi B apologises after being accused of cultural appropriation for ‘sick, disgusting and disrespectful’ Hindu inspired footwear shoot

Cardi B has offered an apology after her Hindu inspired footwear shoot was deemed ‘culturally inappropriate’ by a faction of offended fans.

The rapper has been criticized across social media for appearing to mimic Hindu goddess Durga in a promotional campaign launched on behalf of her new collaboration with the American brand Reebok.

Defined as the principal goddess of war, strength and protection, Durga is traditionally depicted as having numerous arms  – a prominent detail in Cardi B’s latest shoot. 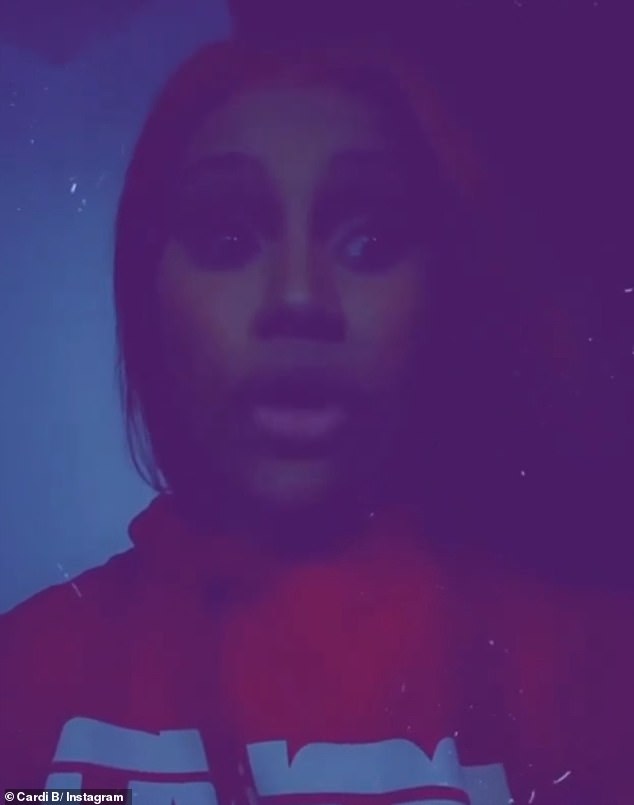 Awkward: Cardi B has offered an apology after her Hindu inspired Reebok shoot was deemed ‘culturally inappropriate’ by a faction of offended fans

Taking to Instagram on Tuesday, the outspoken star, 28, looked uncharacteristically flustered while addressing the controversy – and admitting she should have done her research before getting involved.

She said:  ‘When I did the Reebok shoot the creative told me I’d be a goddess that represents strength, femininity and liberation, and that is something I love, that I’m all about and I thought it was dope.

‘If people think I offended their culture or religion I want to say I’m sorry – that was not my intent. I would not want anyone to disrespect my religion, with people dressed as the Virgin Mary or Jesus, as long as they do it in a beautiful and graceful  way.’ 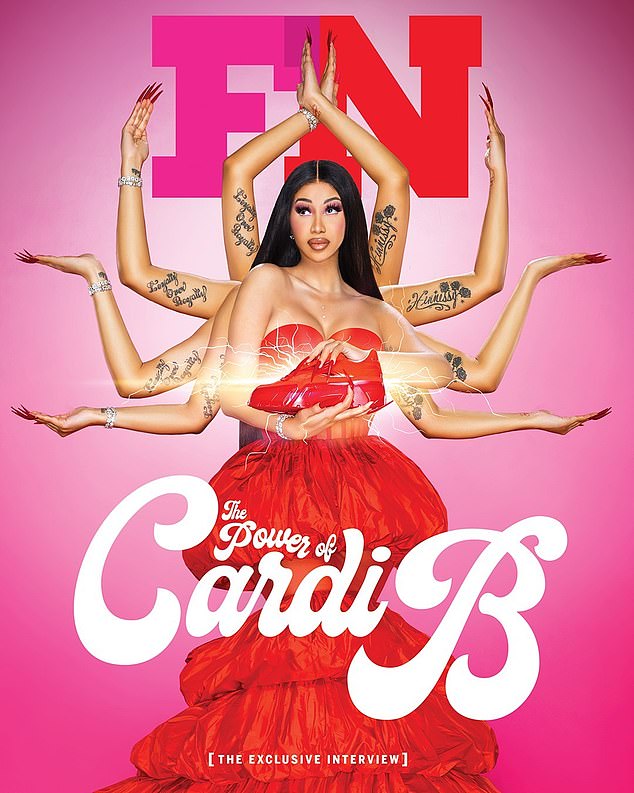 Paying homage? The rapper has been criticized for appearing to mimic Hindu goddess Durga in a promotional campaign launched on behalf of her new collaboration with the American footwear brand

She added: ‘Maybe I should’ve done my research. I’m sorry. I can’t change the past but I’m gonna do more research for the future.’

The rapper was responding after a minority of social media users criticised her for using their religion as a promotional tool to sell a new range of footwear.

Taking to Twitter with a lengthy thread, one incensed follower wrote: ‘Cardi B using my religion as a way to promote something and trying to cover it up as a “homage” is disgusting. 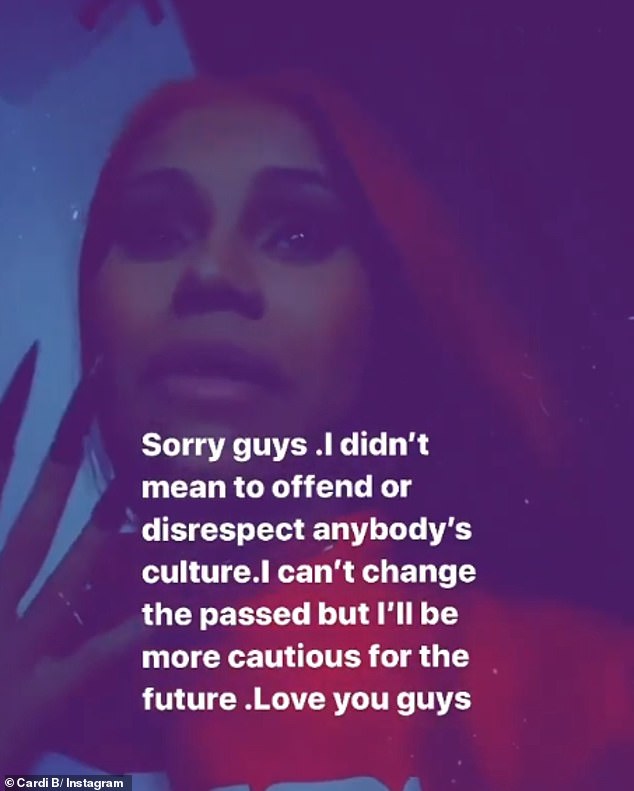 Speaking out: Taking to Instagram on Tuesday, the outspoken star, 28, looked uncharacteristically flustered while addressing the controversy 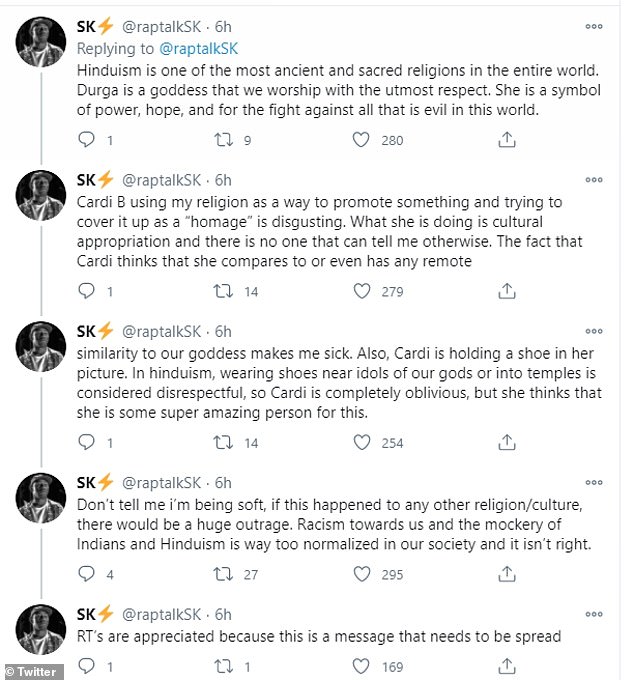 Not happy: One outraged follower outlined exactly why Cardi’s latest campaign was offensive in a lengthy Twitter thread

‘What she is doing is cultural appropriation and there is no one that can tell me otherwise. The fact that Cardi thinks that she compares to or even has any remote similarity to our goddess makes me sick.

‘Also, Cardi is holding a shoe in her picture. In hinduism, wearing shoes near idols of our gods or into temples is considered disrespectful, so Cardi is completely oblivious, but she thinks that she is some super amazing person for this.’

However others defended the star, with one follower writing: ‘As an Indian and a Hindu I am not offended by the post. There is nothing wrong withit.’

While another added: ‘I see where you’re coming from but you gotta understand though, this is for a magazine cover about advertising her show and 9 times outta 10 it’s not up to the artist on what the magazine wants to do with your cover.

‘If they have an idea they’re gonna use it regardless.’

Supportive: However others defended the star, including a Hindu who admitted he was completely unaffected by the new campaign

As she graced the cover of Footwear News, rapper paid homage to Durga while holding a bright red pair of sneakers.

In a glamorous shot of the Grammy winner, she maneuvered her arms into eight different positions from stretched out on her sides to crossed over her head.

The photo shoot – which took place in late October amid the ongoing COVID-19 pandemic – showed her in three additional outfits and a bright red hairstyle.

‘So excited for my sneaker drop this Friday November 13th! Hope you guys love it!’ the WAP hitmaker captioned a shot of herself in a chic all-black ensemble and wide-brimmed hat on Instagram.

In her revealing interview with the publication, she opened up about her grueling schedule, motherhood and highly-anticipated second album. 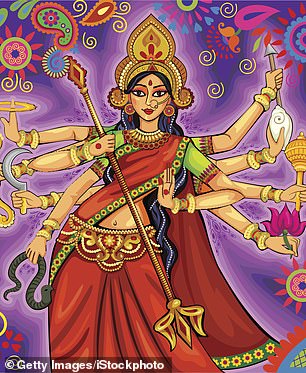 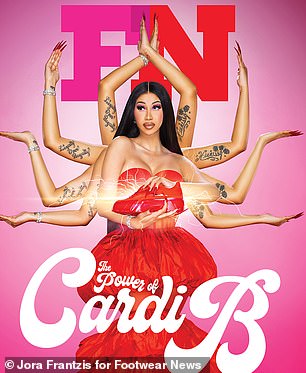 Hindu goddess: As she graced the cover of Footwear News, the rapper paid homage to Durga, a warrior woman with eight hands, while holding a bright red pair of sneakers

‘I can go to sleep with the number one record, but I’m going to sleep and thinking, “I need my other album to go No. 1.” My sneaker sold out so fast; I need my next sneaker to sell out. I always wonder if I’m going to be satisfied,’ she told the outlet.

Despite earning numerous awards from four American Music Awards to four MTV Video Music Awards, she confessed to being ‘very hard’ on herself.

‘I’m hard on my entire team. We don’t focus on nobody else, we are just focusing on our last — the last music video, the last collaboration, we always compare it to our last best. We want to do better and better,’ she explained.

‘When I do something positive and when I see my things selling out or my record doing pretty good, I get this crazy rush of happiness, but then it’s this rush of overwhelmingness that makes me want more [and] want more.’ 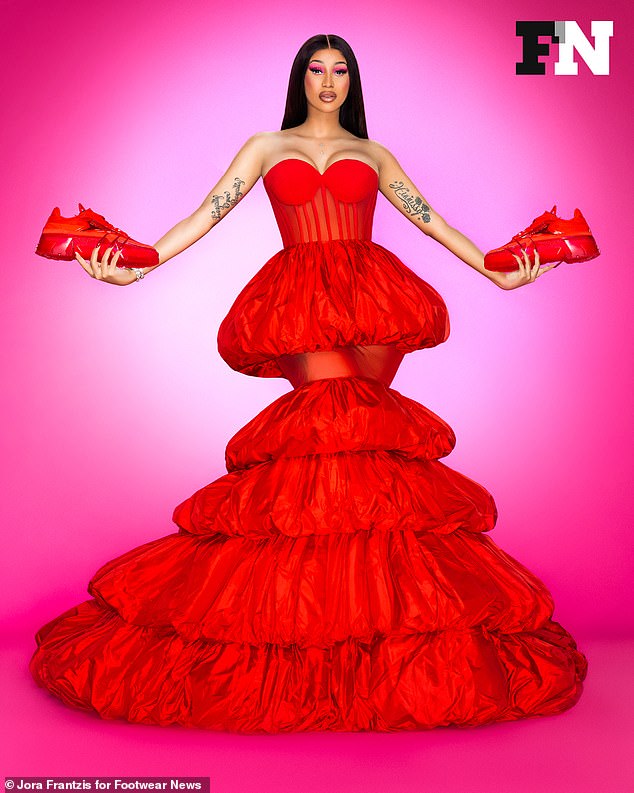 High glamour:  The photo shoot – which took place in late October amid the ongoing COVID-19 pandemic – showed her in three additional outfits