‘I’m shattered and out of sorts’: Carol Vorderman, 60, reveals ‘two months of a different bed and different city every night’ have left her drained as she details her exhaustion in candid video

Carol Vorderman took to Instagram on Monday to detail feeling exhausted due to two months of extensive travelling and work.

The Countdown star, 60, appeared fresh-faced as she spoke to the camera with sunglasses on while sipping a coffee and explaining her recent gruelling schedule.

Explaining that she has become rushed off her feet for an entire two months, she was now feeling the lasting impact of her work after barely being home. 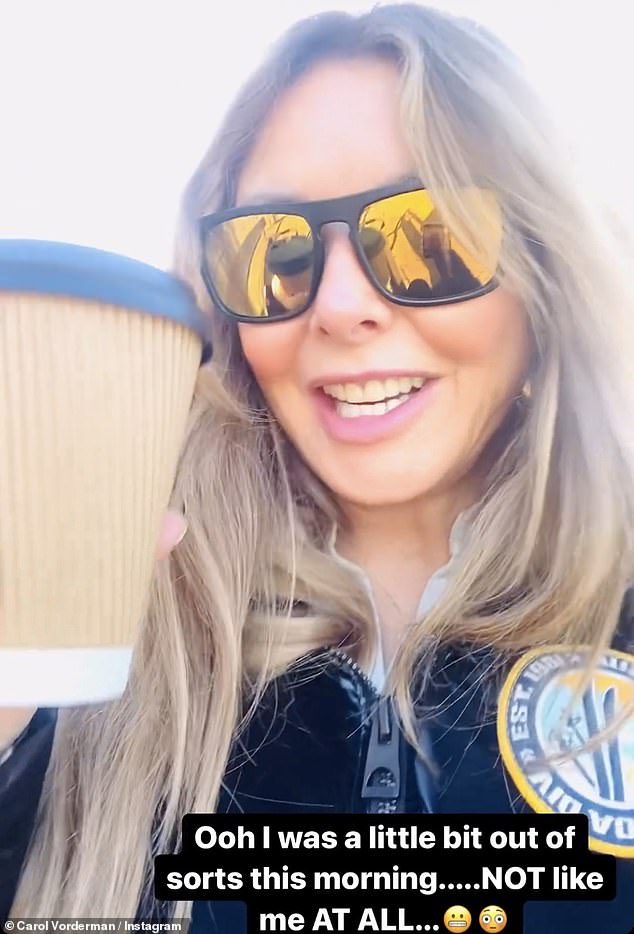 Shattered: Carol Vorderman took to Instagram on Monday to detail feeling exhausted due to two months of extensive travelling and work

Posting on Instagram she captioned each shot telling her 187k followers that she was tired following a hectic schedule of late.

She penned: ‘I think i am just tired, 2 months… different night.. different city… different bed…ugh….travelling so much…you can only do it for so. much cant you, Ha?’

She added: ‘A little walk does the world of good’, having embarked on the light exercise while wrapped up warm and clutching a hot drink.

Carol later posted: ‘Ooh I was a little out of sorts this morning not like me at all’, followed by a straight faced emoji. 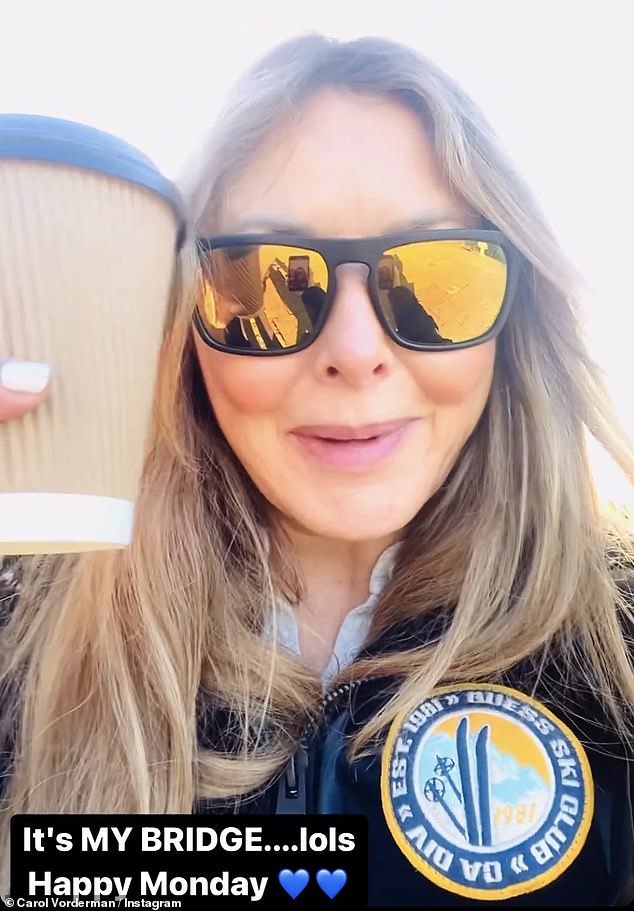 Feeling blue: The Countdown star, 60, appeared fresh-faced as she spoke to the camera with sunglasses on while sipping a coffee and explaining her recent gruelling schedule

She closed by posting the a final image with the caption: It’s MY BRIGDE…Lols Happy Monday, followed by two blue hearts.

The images come after Carol gave her fans a rare insight into her family life by posting a picture of herself and her son Cameron, who has severe learning difficulties, and revealed he recently graduated from University.

Carol shared that Cameron, 24, graduated with a master’s degree in Animation and VFX after successfully receiving a first class undergraduate award last year. 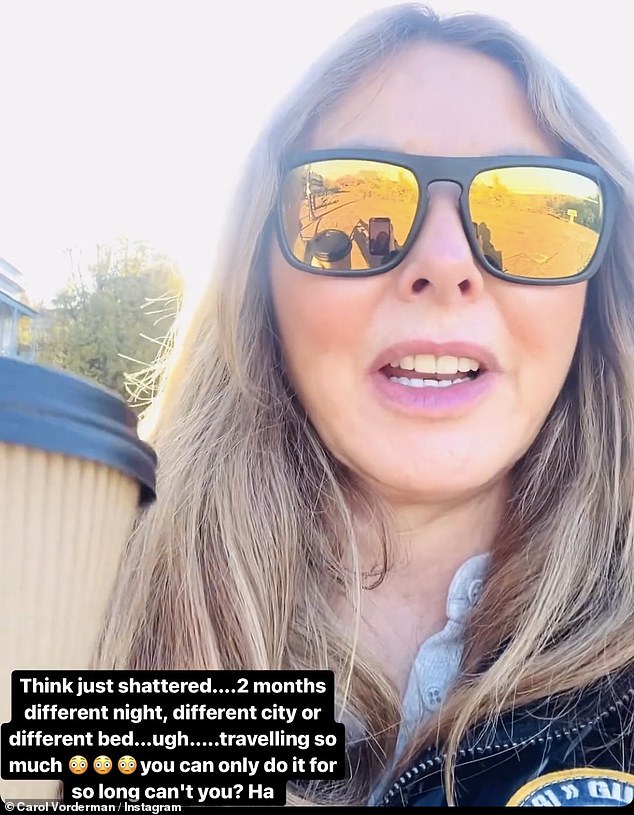 She detailed the struggles that her son had overcome in his early education as he attended a special school and worked hard to successfully attain two degrees.

She added: ‘I didn’t want him to grow up with labels,’ before saying that there were ‘early signs’ of her son’s learning difficulties, explaining that while her eldest child Katie King, 30, was able to ‘learn the alphabet easily’ Cameron ‘couldn’t retain information’.

Carol explained Cameron needed ‘an enormous amount of assistance’ and ‘went through bullying as a kid’.

She shared: ‘Such a wonderful day @dundeeuni. So Cameron was in a special school with severe learning difficulties for most of his early life but he’s worked hard and learned strategies and boy how he’s turned it all around.’

‘I couldn’t be prouder of him. We never dared to dream this day might come when he graduated with a first class honours last year and now a Masters degree in Animation and VFX. 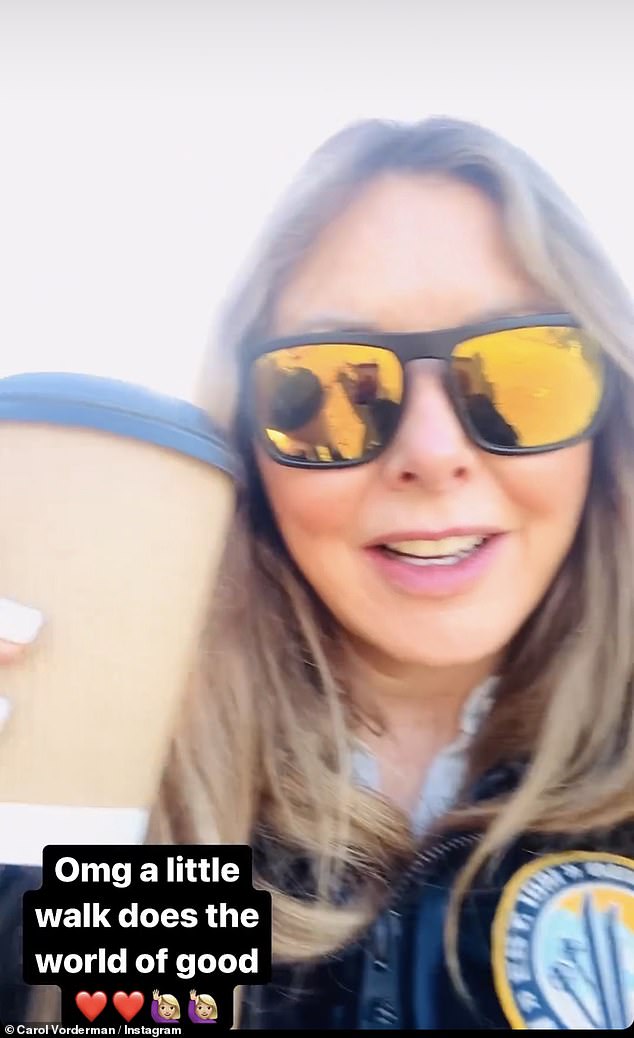 Hot and drink and a Stroll: She posted that ‘a little walk did the world of good’

‘Thank you Dundee for giving him all that you have over the last year. Amazing.’

This comes as last month, Carol and Cameron spoke candidly on This Morning about his special education needs.

The star was visibly emotional when she revealed that when Cameron was ‘four or five’ she moved him to a new London school, however was told by teachers ‘we can’t have him here’ as ‘we can’t teach him’.

Sharing just how protective she felt of her son in his younger years, Carol said: ‘As a mother, a single parent [you want to] protect, protect, protect. Like a lioness.’ 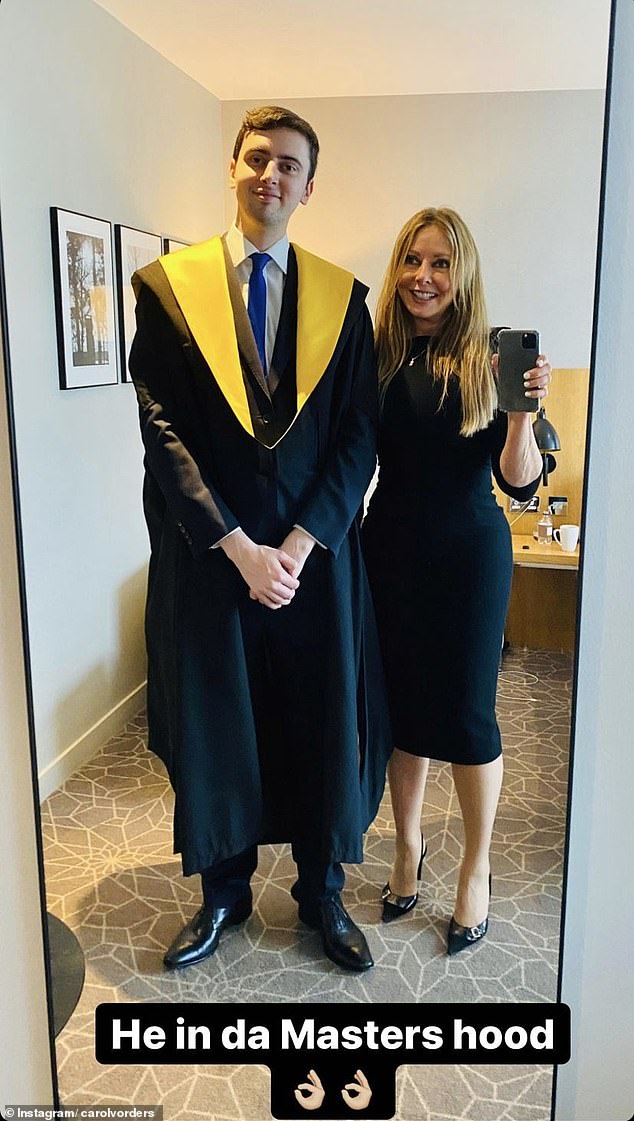