‘I’m worried for my family’: Chrissy Teigen hits breaking point on Twitter over wild conspiracy theorists linking her to Jeffrey Epstein… as she deletes 60,000 tweets

Chrissy Teigen has admitted that she’s ‘worried for her family’ after receiving vile attacks on Twitter from conspiracy theorists who have been bizarrely linking the model to convicted pedophile Jeffrey Epstein since last October.

For the past week, the 34-year-old mother-of-two has been publicly fighting off renewed Twitter trolling, including wild accusations that she once traveled on Epstein’s private plane and that she had been part of his ‘pedo ring.’

However, on Tuesday, Chrissy appeared to hit breaking point as she responded to a claim by podcast host Chrissie Mayr that she recently deleted her own incriminating tweets, revealing that she was now fearing for her family as a result of the attacks. 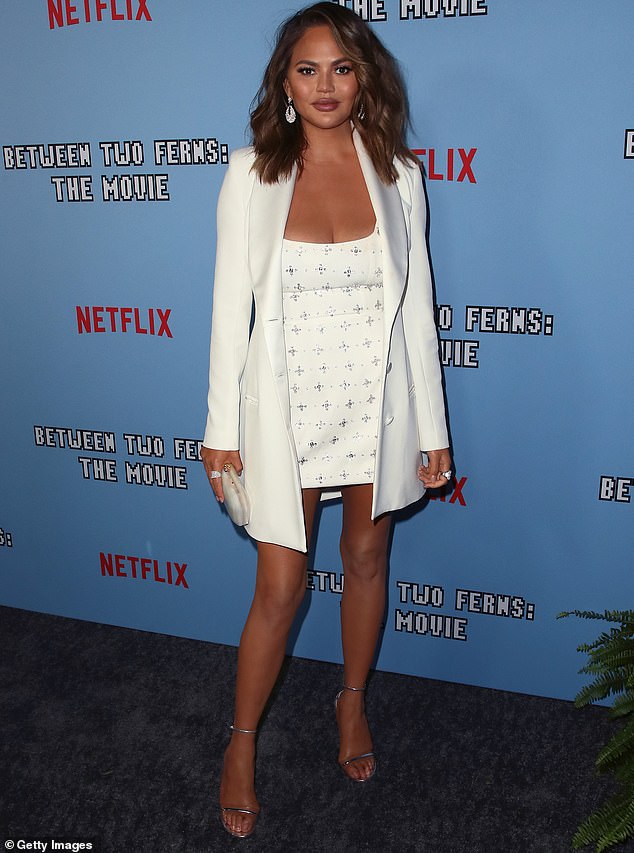 Breaking point: Chrissy Teigen said she is ‘worried for her family’ on Tuesday, after being bombarded by Twitter attacks making bizarre claims linking her to Jeffrey Epstein

‘I actually deleted 60,000 tweets because I cannot f****ing STAND you idiots anymore and I’m worried for my family,’ Chrissy’s expletive-filled rant began. ‘Finding me talking about toddlers and tiaras in 2013 and thinking you’re some sort of f***ing operative.’

The supermodel had directly responded to Chrissie Mayr, who provided statistics, claiming to show that Chrissy had been deleting thousands of old tweets from her account, suggesting that she had something to hide.

However it seems that the model has deleted a large portion of her Twitter history to stop trolls from trawling through her past tweets and attacking her.

Chrissy – who shares two children, Luna Simone, four, and Miles Theodore, two, with her husband John Legend, 41, – responded in outrage to further claims made on the social media site. 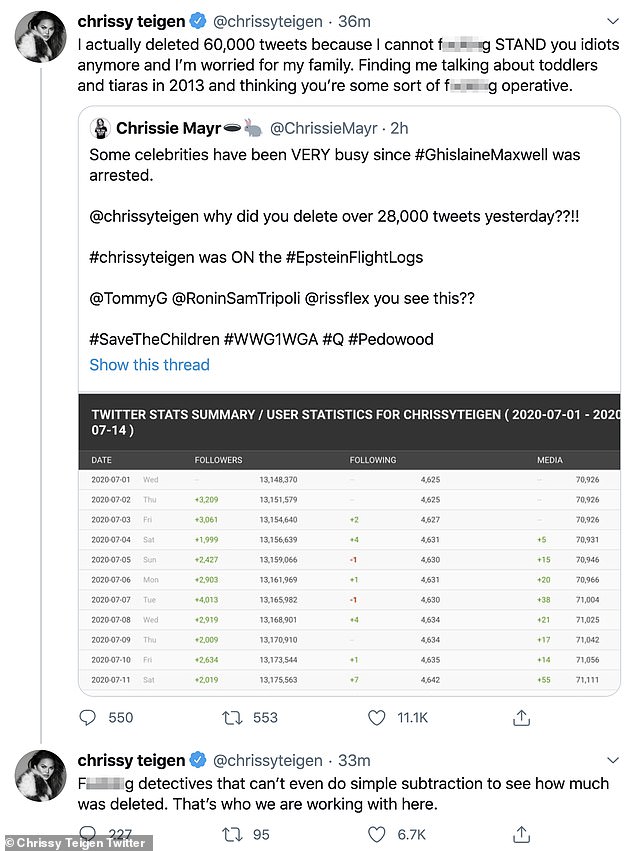 Had enough: The mother-of-two has been responding to cruel trolls making bizarre claims that she and husband John Legend have been linked to convicted pedophile Jeffrey Epstein

When one user questioned why the model was getting so ‘defensive’ Chrissy responded: ‘this I don’t get. everyone thinking I’m guilty because I’m defensive. You understand you are calling me a pedophile, correct?’

At one point, Chrissy tweeted ‘I don’t know how to stop this’ as she appeared to get increasingly frustrated over being bombarded with the wild claims.

Last October, the model and TV personality forcefully shot down rumors she and husband John were on Epstein flight logs.

Convicted pedophile Epstein allegedly had ‘island logs’ of everyone that flew on his so-called ‘Lolita express’ to his private island, Little St. James, which has been nicknamed ‘pedophile island.’ 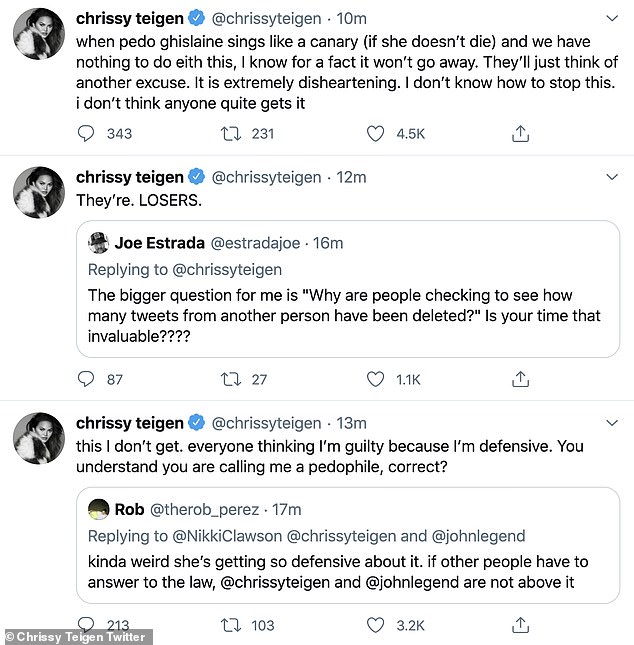 ‘I don’t know how to stop this’: Chrissy grew increasingly frustrated after she bombarded with wild claims on Tuesday 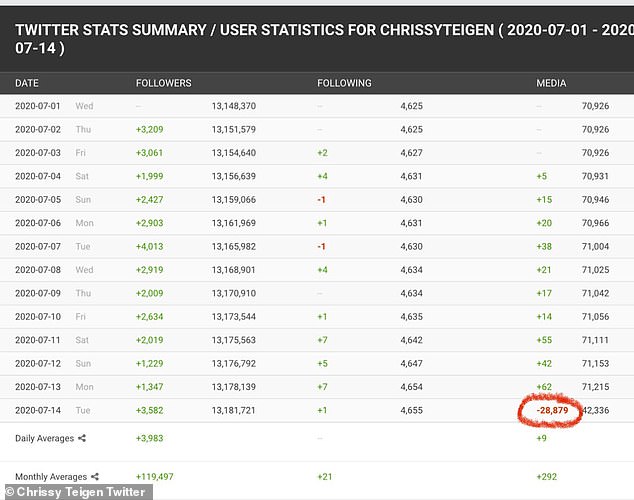 Alleged proof: One troll posted this data to the model, in a bid to prove that she had been trying to delete incriminating tweets

Twitter users claimed last week that Chrissy was ‘on the flight log’ for a plane heading to the sex offender’s private island, prompting the Cravings cookbook author to respond: ‘if we wanna play with your lie just for fun, do you understand that if I were on a flight for the date of his “manifest”, I’d be a victim.’

When that failed to shut it down, she tweeted: ‘it is honestly a miracle I haven’t blown myself up.’

In another tweet, Chrissy slammed the conspiracy theorists who refuse to accept that there’s no truth in their allegations. 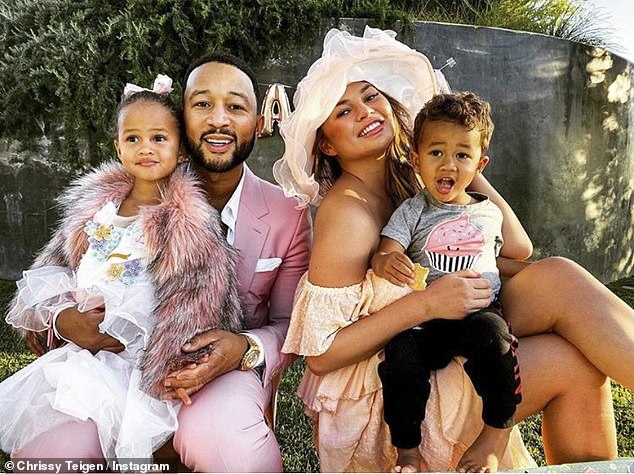 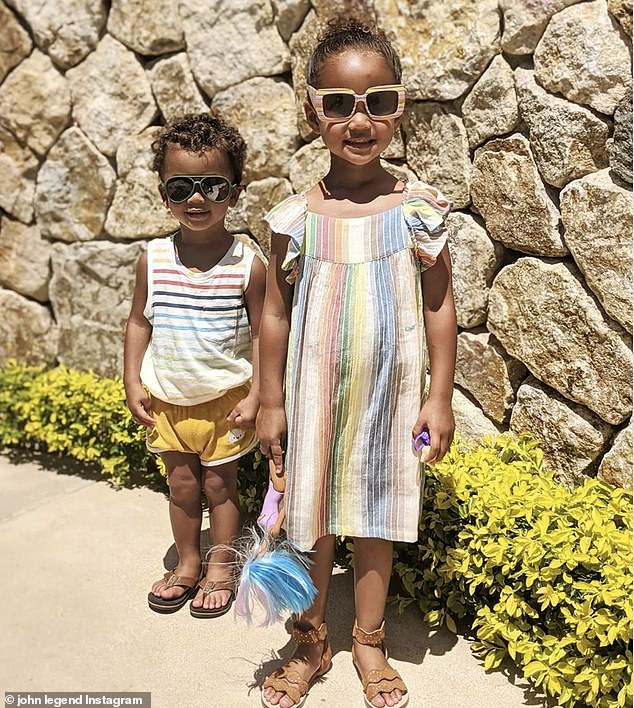 Proud papa: Meanwhile on Tuesday, her husband John posted this adorable photo of their two children

‘another fun thing is tik tok has 18 year olds thinking they’re CIA ops,’ she said, linking to a since deleted tweet.

The doting mother added: ‘It used to be just deranged 50 somethings. Now it’s tik tok,’ she wrote. ‘And when nothing pans out for them with me and john, it won’t simply go away. They can’t admit they’re wrong. They’ll say every vacay I take from here on out is my mandated jail time. Lol.’

And in response to a graphic of Donald Trump with the words ‘Trump declares war on child traffickers,’ she tweeted: ‘Why. Do these people. Pretend. He wasn’t. Best friends. With Epstein. If you’re gonna take “them” down, why not him too? Why. Are they. So f***ing. Stupid. My brain hurts.’