‘Let your imagination run wild!’ Christine McGuinness sets pulses racing as she shares snaps of herself posing in lacy lingerie

She’s currently in the midst of a big house move, as she and her husband Paddy McGuinness prepare to settle into a new home with their family.

But Christine McGuinness took some time away from the chaos on Friday to pose for a sizzling lingerie shoot, the results of which she shared on Instagram.

The mother-of-three, 32, looked sensational as she posed in a lacy red and black bra, which she teamed with matching panties and black stockings and suspenders. 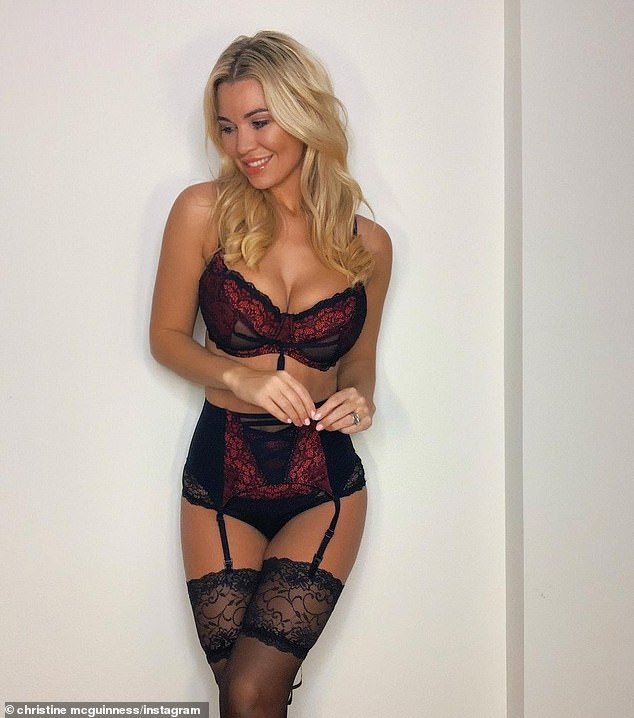 Sizzling snapshots: Christine McGuinness shared snaps of herself posing in lingerie on Friday

Showing off the results of her commitment to fitness, the blonde beauty looked enviably toned as she posed coquettishly for the camera.

Styling her flaxen tresses in long soft waves with a centre parting, Christine highlighted her good looks with a slick of red lipstick.

Captioning the trio of images – which were taken as part of a promotion for Pour Moi lingerie – she wrote, in part: ‘Let your imagination run wild.’

Christine’s post comes as she and her TV presenter husband Paddy, 47, set the wheels in motion for their big move at the start of the week. 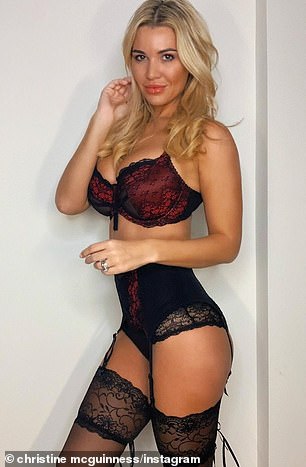 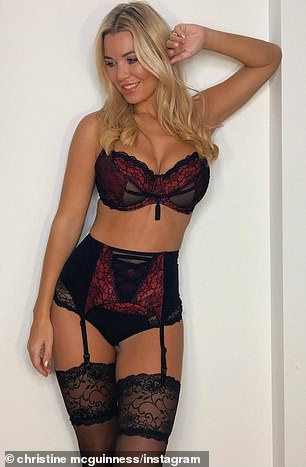 Sensational: The mother-of-three, 32, looked sensational as she posed in a lacy red and black bra, which she teamed with matching panties and black stockings and suspenders

The couple, who wed in 2011, are relocating from the spacious rented property that has provided a base throughout lockdown to a bought and paid for family home.

Taking to Instagram, Christine, admitted she and Paddy – parents to twins Penelope and Leo, both seven, and four-year old Felicity – had a lot of work to do over the coming weeks.

Sharing a picture of the couple, she wrote: ‘Maaaad few weeks ahead for team #McG Let’s go!!!’

Paddy later admitted they were aiming to finally settle down in a permanent home after moving from one rented home to another for almost half a decade. 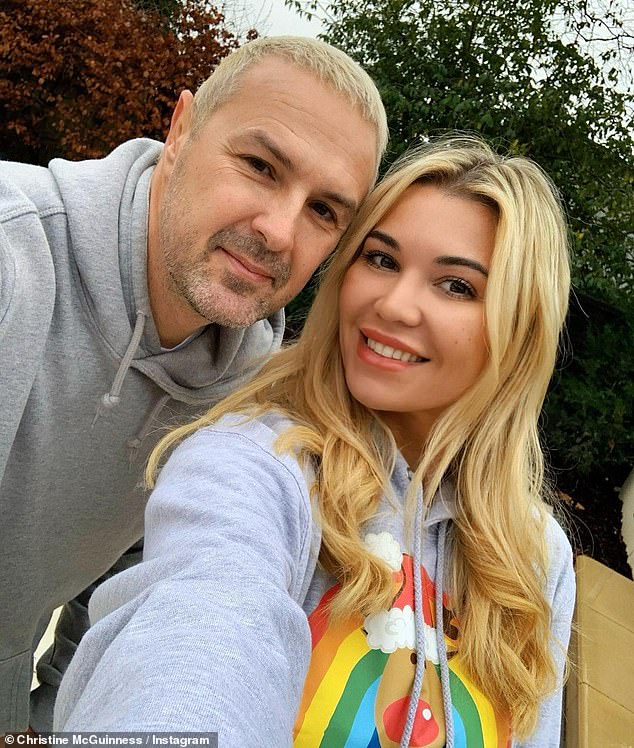 Let’s go! The boxes were packed and the wheels were quite literally set in motion on Monday as Christine and her husband Paddy McGuinness prepared to move into their very own house

Captioning a snap of himself looking exhausted while taping up boxes, he wrote: ‘We’ve been renting for nigh on five years and this will be the fourth time we’ve moved in as many years. I never want to tape together another cardboard box ever!!!!

‘On the plus side we’re now packing to finally move into our own house!!!! #moving #newhouse #nomorerenting #furnitureofourown #cantwait #staysafe #sunday #packing #weekend.’

With the hard work just beginning Paddy also admitted he was taking a well earned break by making himself a cup of tea before finally saying goodbye to their rented home.

Sharing a snap of his mug – an old piece of merchandise from TV show Max & Paddy’s Road to Nowhere – he wrote: ‘More or less everything is packed away now, ready for the big move. Time to bust out the emergency cups!’ 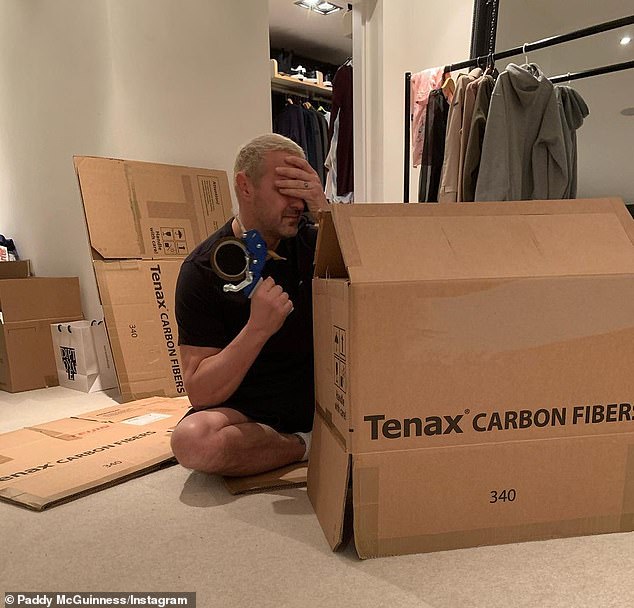 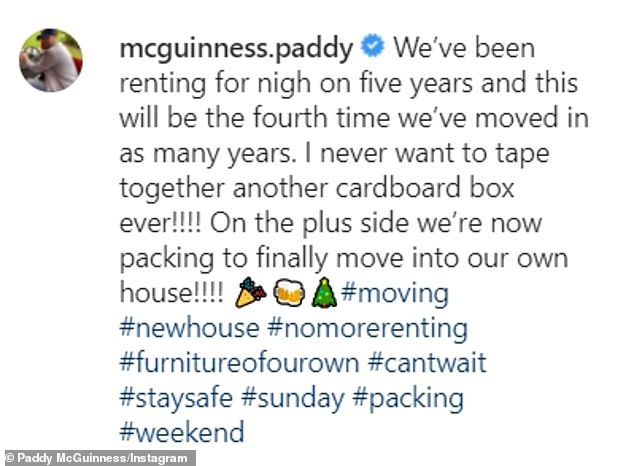 Permanent roots: Paddy, 47, later admitted they were aiming to finally settle down in a permanent home after moving from one rented home to another for almost half a decade

Sharing separate clips of the boxes diligently packed by Paddy, the model admitted one of her most loved possessions – a hardback copy of Charlie Mackesy’s illustrated book The Boy, the Mole, the Fox and the Horse – was the first item to be placed in the removal van.

The move comes after Christine admitted she  would have loved a fourth child, but Paddy underwent a vasectomy in 2019.

Taking part in an Instagram Q&A with fans, she was asked if they had plans to extend the family, replying: ‘No [unhappy emoji]. 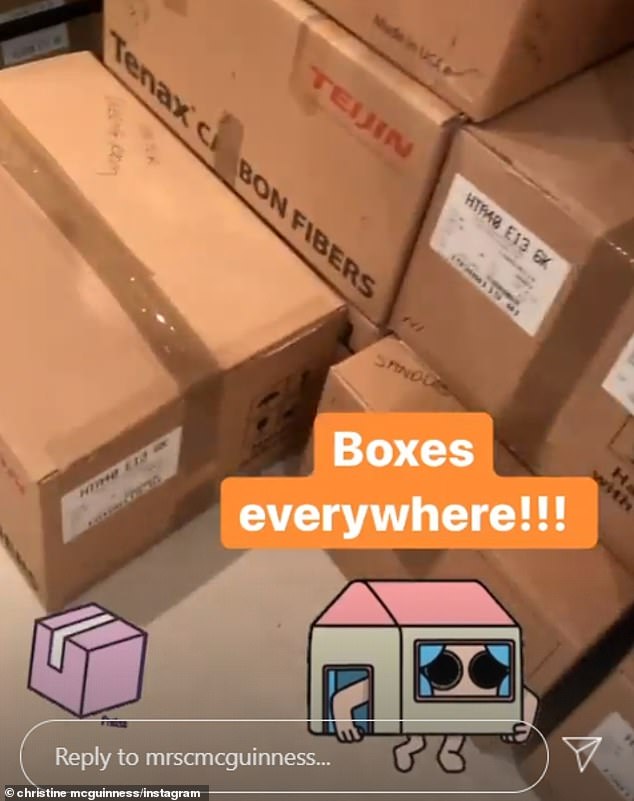 All set: Christine shared a clip of the boxes diligently packed by Paddy ahead of their move

‘I would have loved one more but Mr Mc is snipped. It is the right decision for our family, our hands are full with three!’

Christine also revealed that next year will be her ten-year wedding anniversary with Paddy and insisted that they will not be renewing their vows, she quipped: ‘No… once was enough!’

After being asked why she has been teetotal for 13 years, Christine admitted that there is a ‘story’ for her sobriety but she doesn’t want to share it yet.

She admitted: ‘My body is a temple. No seriously there is a story behind this but I’m not willing to share for now. I’m good without the alcohol.’ 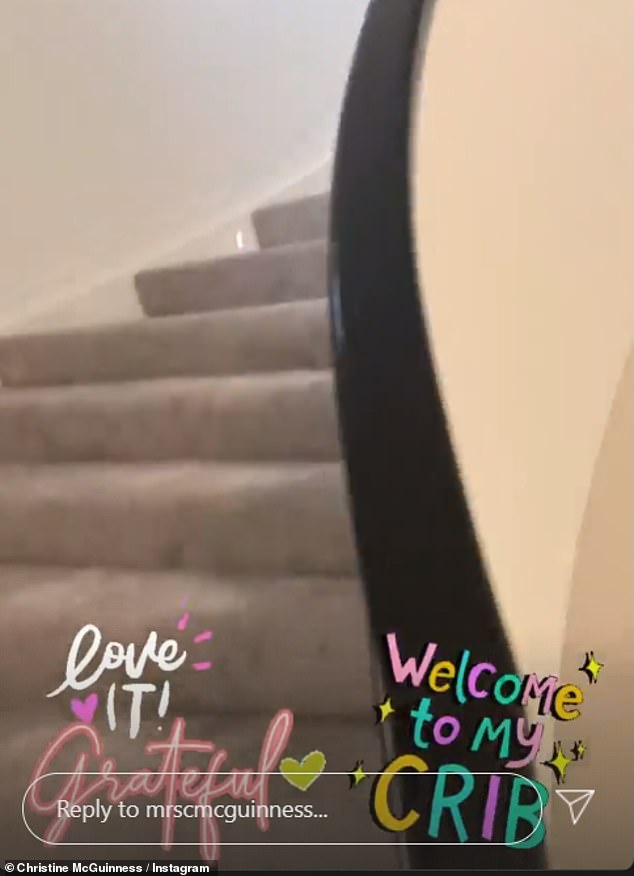 Welcome to my crib: Christine later gave fans a brief glimpse at the new property, which features a distinctive spiral staircase and broad, open landings