Talk about a hot couple! Ciara and Russell Wilson graced the cover of GQ’s ‘The Modern Lovers’ issue, and inside she posed in a deep purple satin slip dress while laying on her husband’s chest.

Ciara and Russell Wilson turned up the heat for their March GQ cover photoshoot. The fashion-loving Seattle Seahawks quarterback and his singer wife were total couples goals, dressed in designer outfits while posing seductively. In one snapshot, the 35-year-old songstress donned a deep purple Rag & Bone satin slip dress, which she pulled up to show plenty of thigh. The mother of three laid her head and back against Russ’ chest, as he looked smoldering in an all-white Dolce & Gabbana shirt and pants. You can see the sexy photo here.

Cici continued to show off her gorgeous dancer-toned legs in another photo where she wore just a Human Nation tan robe-style belted coat as she sat on Russ’ lap. She didn’t wear anything underneath the garment, sitting with her legs crossed while wearing a pair of to die for Giuseppe Zanotti buckle strap high heel sandals. The couple both gave perfect model gazes into the camera, as the photogenic pair looked so incredible together. 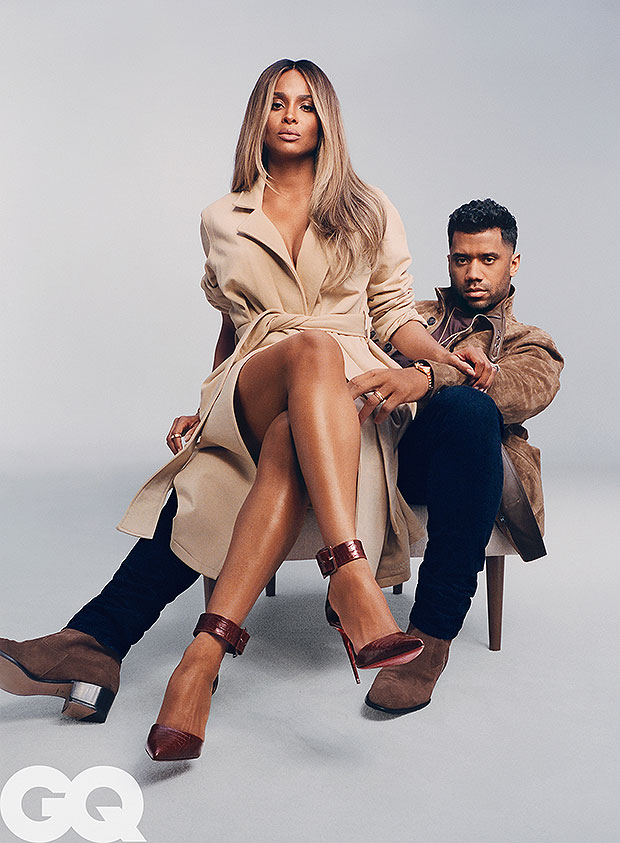 As if being a Super Bowl winning quarterback and a successful singer wasn’t enough, Russell Wilson and wife Ciara are model gorgeous and so incredibly fashionable in the latest issue of ‘GQ.’ Photo Credit: Micaiah Carter

The pair grace the cover of GQ’s upcoming “Modern Lovers” issue, where they revealed how they try to spend as much time together as possible, for two people with such demanding careers. “We have some fun rules that we created,” Ciara explained. “What is it, like 10 days that we don’t wanna push past, babe? Ten days when we travel?” 2014 Super Bowl champ Russell responded, “When we first met it was 14 days,” which was in 2015. The couple married a year later in an English castle and “Then it was 10 days. And now it’s no more than seven or five. I don’t know, it may be really five days at this point.” 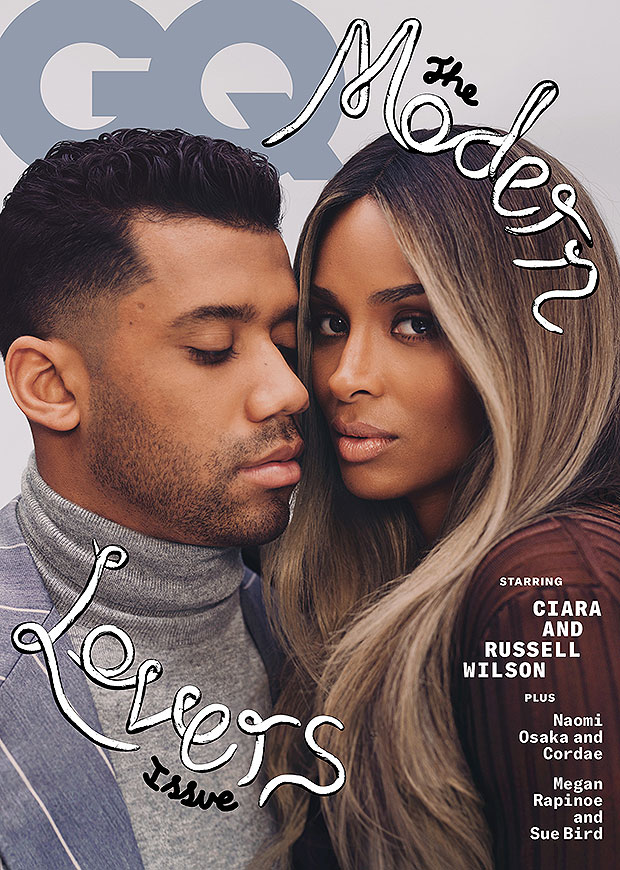 Even though he’s an elite NFL quarterback and she’s a successful singer, Russell and Ciara are so deeply in love that they can’t stand to be apart. “We’re just grateful that we get to spend time together every day,” Russ told the publication. “Every morning we wake up together it’s a blessing, and we get to smile from ear to ear and know that ‘You know what? Let’s go. Let’s go do this.’ ”

Ciara agreed that their life is like a fairytale. Both are superstars in their own right, and are raising three gorgeous children together: CiCi’s six-year-old son Future Jr. from her relationship with the namesake rapper, and the couple’s kids, daughter Sienna Princess, 3, and seven month old son Win. “I feel like, if I could look back in a crystal ball when I was a little girl, and I looked at the idea of my family and what it would be for me, it’s exactly this,” Ciara gushed to the magazine.