Curtis Pritchard has been pictured putting on a very cosy display with Amber Pierson, who he previously denied cheating on Maura Higgins with.

The Love Island star, 24, and dancer, 21, walked arm-in-arm and stopped to share a kiss as the enjoyed an evening stroll in the snaps which were taken on Tuesday.

After the images were revealed on Friday, a source close to Curtis’ ex Maura, 29, told MailOnline that it was a ‘massive kick in the teeth’. 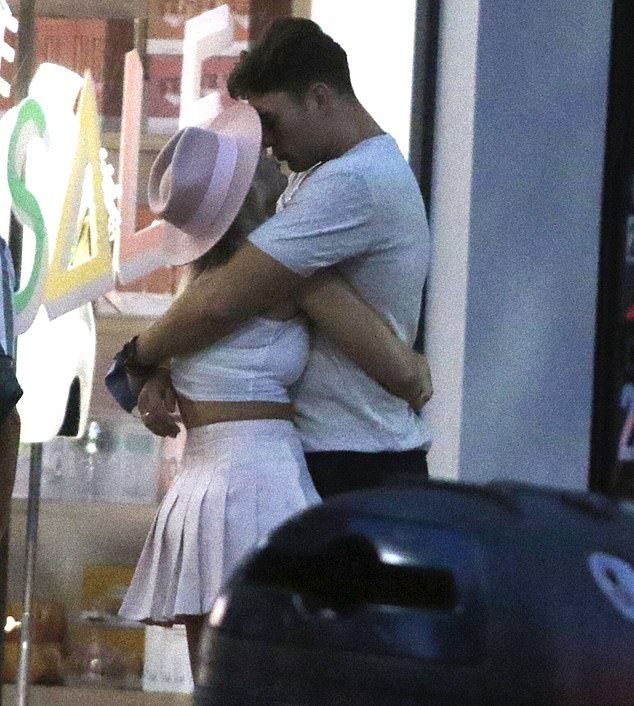 At one point during their walk, Curtis wrapped his arm around Amber as they strolled close to his brother AJ, 25, and his girlfriend Abbie Quinnen.

After the images came to light, an insider told The Sun: ‘It’s game over for Curtis and Amber pretending they are just pals. Their ‘friends’ line fooled no one.’

Curtis is said to have taken Amber out on a double date, where they enjoyed dinner with AJ and Abbie before strolling though the park together. 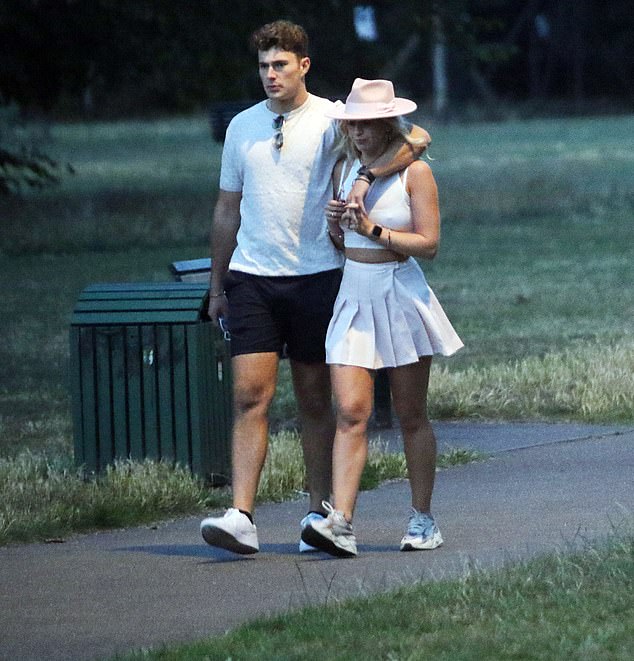 Cosy: The Love Island star wrapped one arm around Amber as they strolled through a park 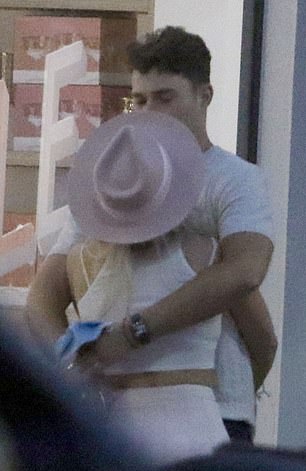 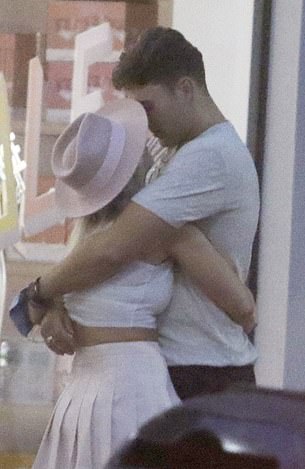 Pucker up: While standing outside a shop, Curtis and Amber shared a kiss 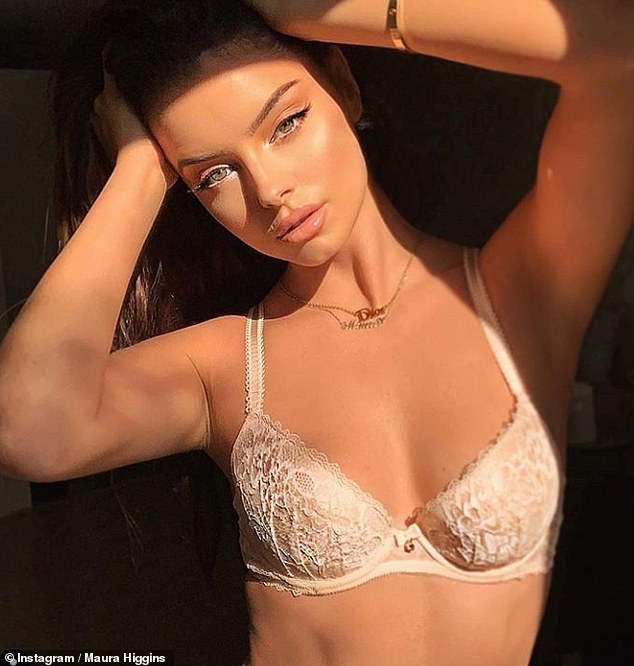 ‘Kick in the teeth’: A source close to Maura told MailOnline that she believes she ‘should have trusted her gut’ following cheating claims about their relationship in the past

Amber was also spotted on a trip to Cornwall with the group last week. Scrupulous fans spotted her next to Curtis in a series of snaps shared to Instagram.

On Saturday a source close to Maura told MailOnline she views Curtis’ cosy exchange with Amber as ‘a massive kick in the teeth,’ and believes she ‘should have trusted her gut’ following cheating claims about their relationship in the past.

Maura and Curtis called it quits in March just eight months after leaving the Love Island villa, with sources claiming at the time the Irish reality star felt pressured to maintain the romance to boost their profile, which the dancer strongly denies.

The source said: ‘This is a massive kick in the teeth to Maura as she did have her suspicions and believes now she should have trusted her gut feeling at the time. 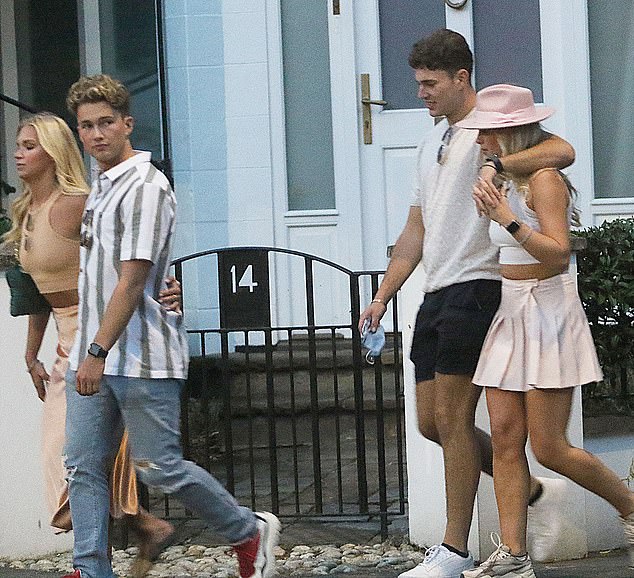 Double date? Curtis’ brother AJ and his girlfriend Abbie were also seen on the walk 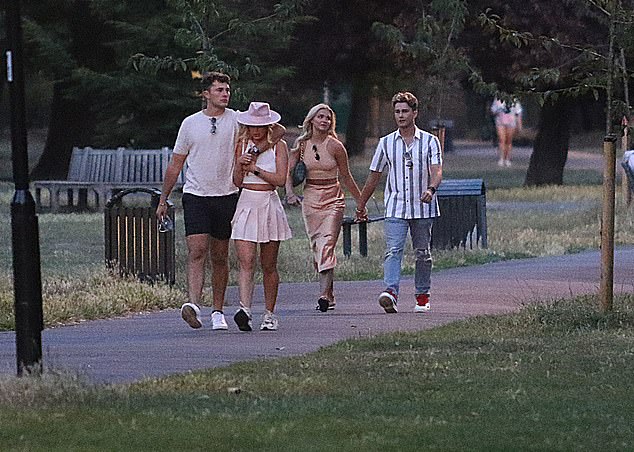 Stroll: Curtis and Amber lead the way, as AJ and Abbie followed behind them during the outing 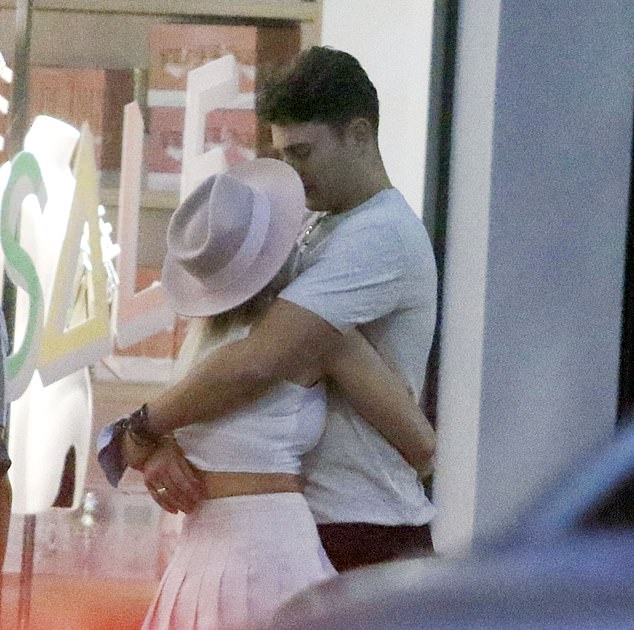 Lean in: Amber donned a pale pink hat and white crop top for the night our with Curtis

‘However Maura is in a really great place right now, focusing on herself and her career.’

MailOnline has contacted representatives for Curtis Pritchard for comment.

Mere hours after Curtis was pictured kissing blonde dancer Amber, Maura also took to Twitter on Saturday to cryptically write: ‘The truth always comes out in the end.’

Love Island star Curtis previously hit back at claims he had cheated on his ex-girlfriend Maura, with Amber, who also called the speculation a ‘complete lie.’ 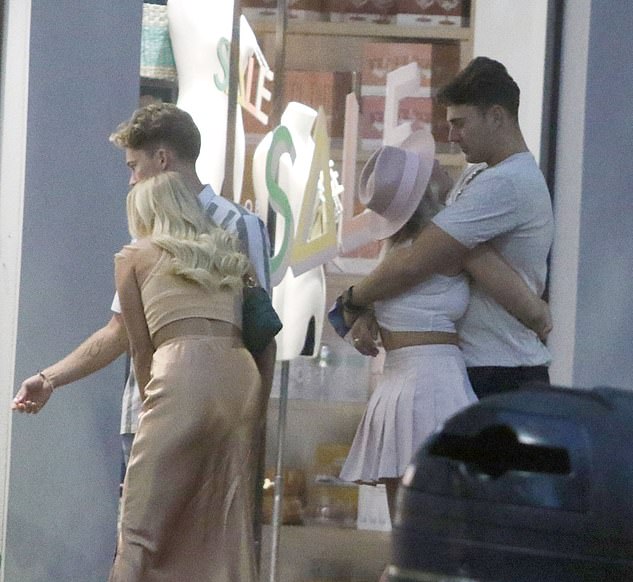 Break: While Amber and Curtis packed on the PDA, AJ and Abbie had a look in the shop window 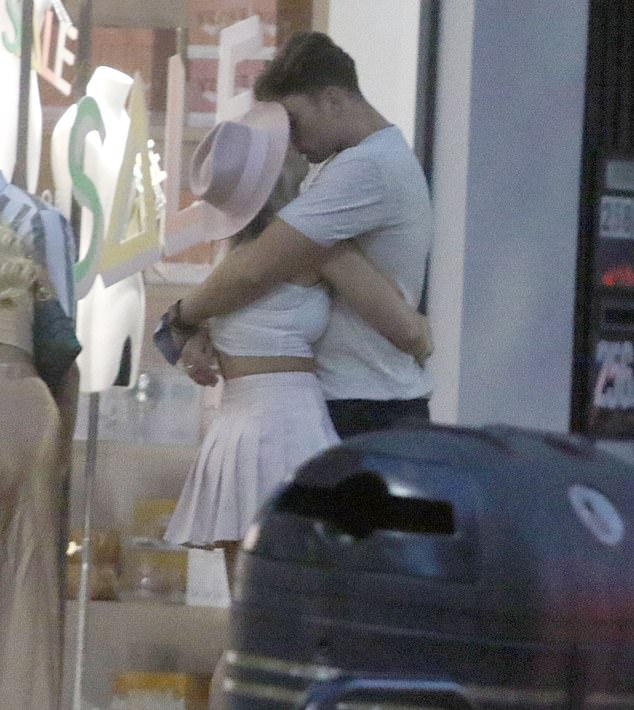 Pictured: Curtis denied cheating on Maura with Amber after their split in March, but it appears they have grown closer in recent days 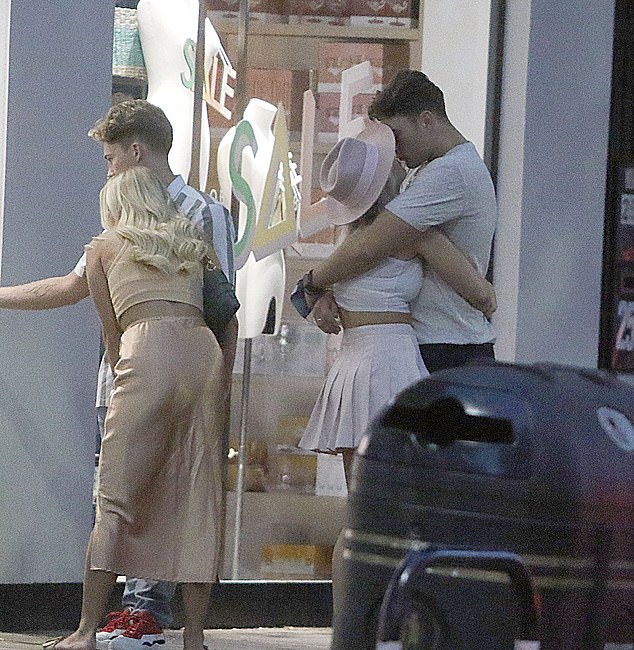 Kiss: AJ and Abbie appeared oblivious to Amber and Curtis’ shenanigans behind them 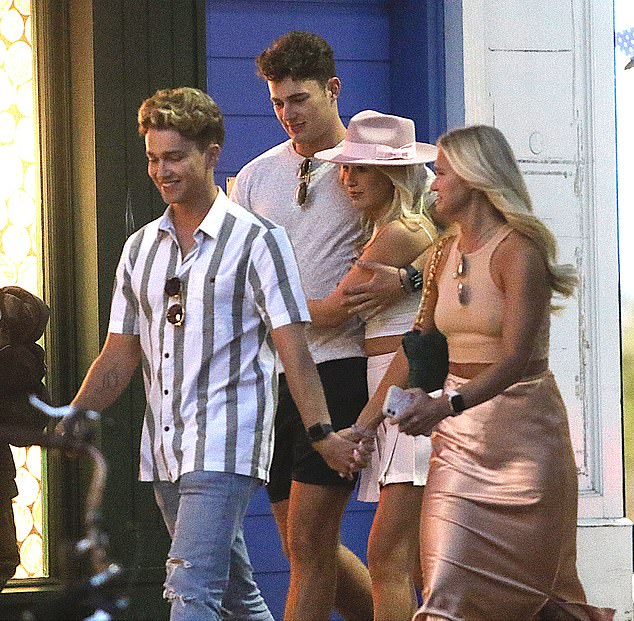 Smiles: The group appeared to be in good spirits as they enjoyed an evening together

Curtis and Maura’s relationship was rumoured to be on the rocks in March after speculation surfaced that he was getting overly friendly with the blonde beauty.

His Irish ex had reportedly confronted him after she noticed him getting to close to comfort with his dancer ‘friend.’

The red flags went up for Maura when she was alerted to an anonymous tweet, saying that Curtis was spotted ‘hugging and kissing’ the blonde.

Following the speculation, Amber dismissed claims she’d had a fling with Curtis behind Maura’s back calling them ‘complete lies,’ but branded the Love Island hunk ‘a lovely and talented guy’. 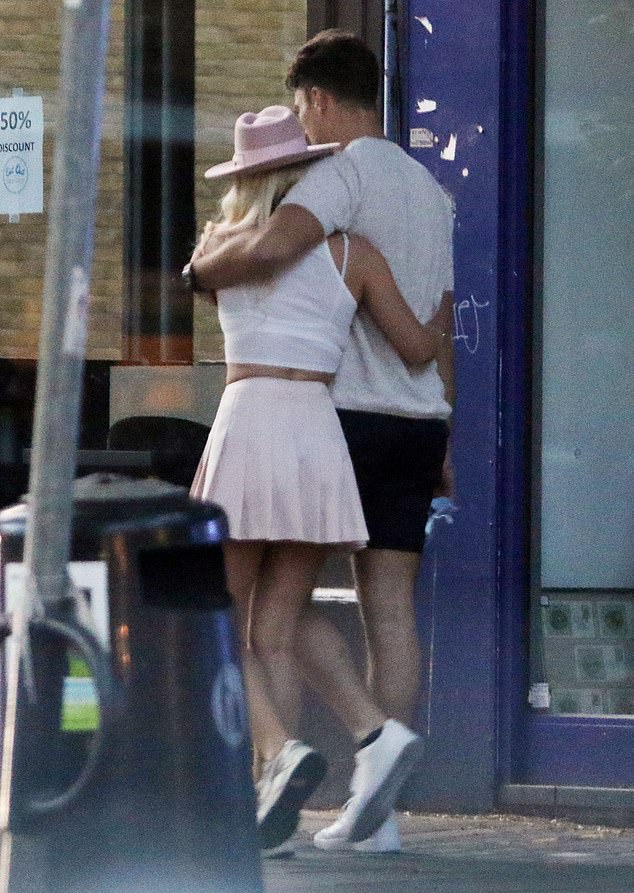 Arm-in-arm: Abbie wrapped her arm around Curtis, with him also holding her in close 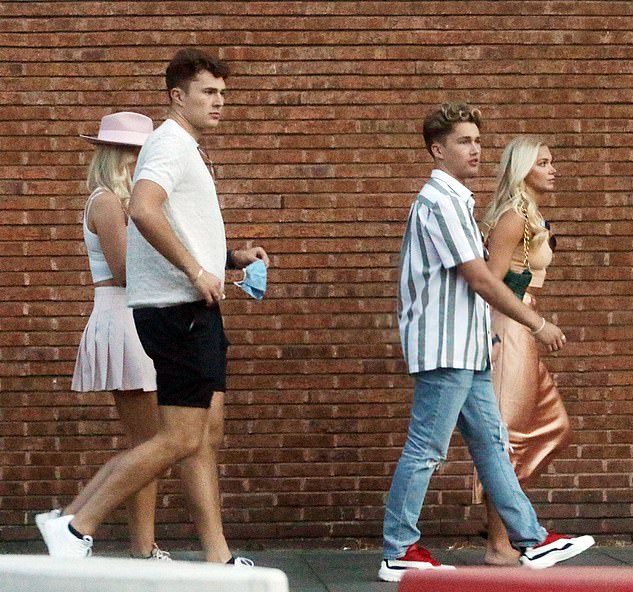 Date night? Curtis held onto a face mask as the quartet made their way along the street 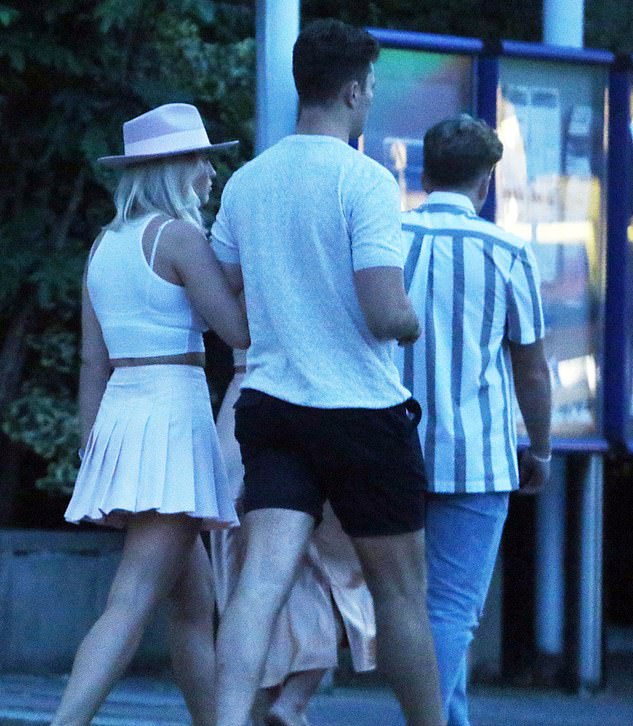 Linked: Amber linked her arm into Curtis’ while out for a stroll 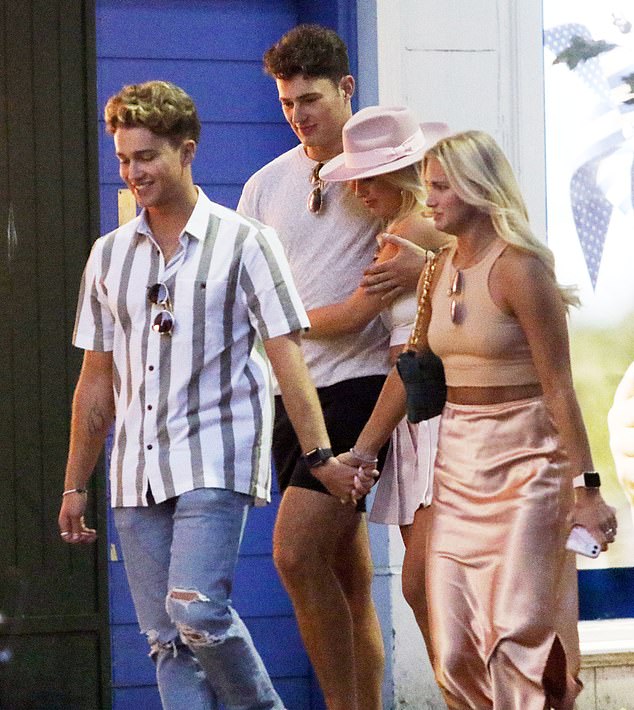 Having fun: The group could not stop smiling as they spent quality time together

Taking to Instagram, she wrote: ‘I didn’t want to speak out about this, but I feel I have to as I have been receiving a few abusive messages recently regarding what’s been in the papers.

‘To be very clear, Curtis and I have never been together. We are simply friends and dancer partners! There are 13 dancers going on tour, and I am one of them.

‘The ‘cheating’ allegations this week are out of the blue and complete lies.

‘I wanted no part in this but what I will say is Curtis is genuinely a lovely and talented guy, who doesn’t deserve any of this. Hope that’s set the record straight and we can move on. Amber x.’ 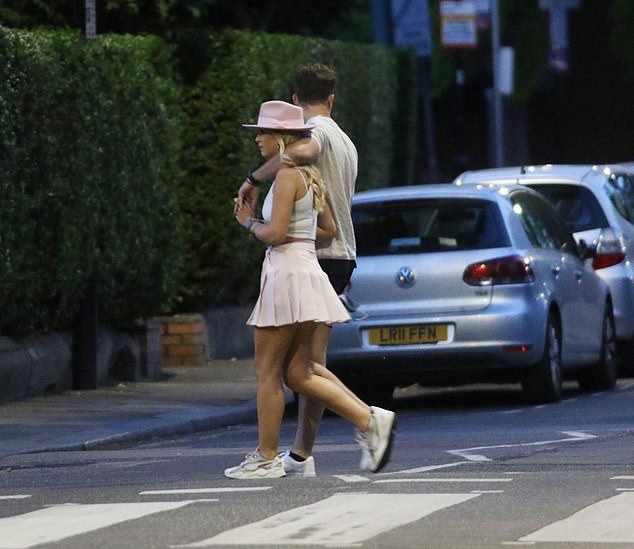 In step: Amber and Curtis has refuted speculation that they’re dating in the past 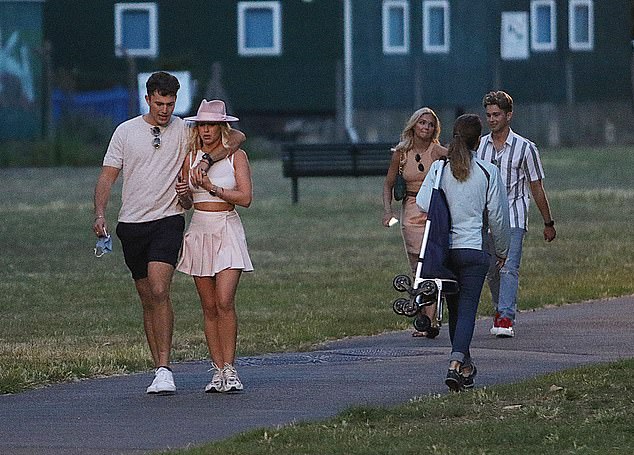 Evening walk: Curtis and Amber appeared to be deep in conversation as they walked through the park ahead of his brother 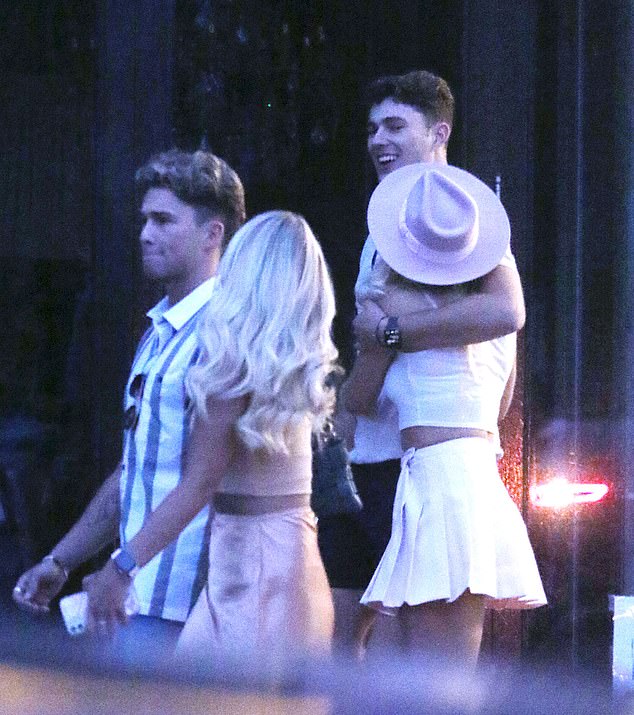 Something funny? Abbie looked over her shoulder at one point as Curtis laughed in her direction 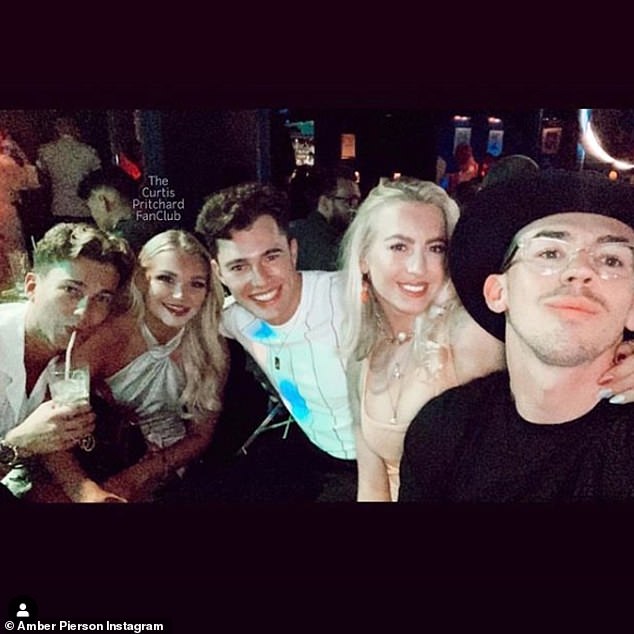 Curtis and Maura found love towards the end of the 2019 ITV series and continued to date for eight months after their exit before their relationship came to end in 2020.

It was claimed at the time the couple rowed over her friendship with her Dancing On Ice partner Alexander Demetriou.

The Sun reported that Alex’s friendly relationship with Maura caused arguments with his Dancing On Ice skater wife Carlotta Edwards.

Carlotta and Alex have since announced the break down of their marriage, but Maura has always insisted she is just friends with the professional skater. 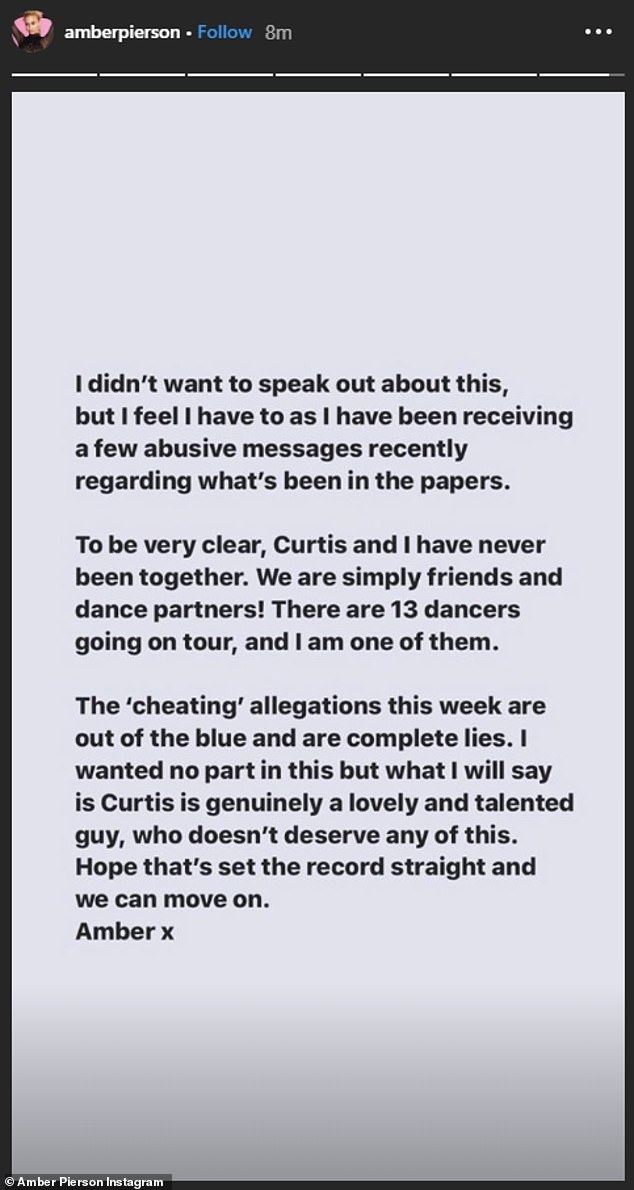 Setting the record straight! Back in March, Amber dismissed claims she’d had a fling with the Love Island hunk behind his ex Maura’s back as ‘complete lies’