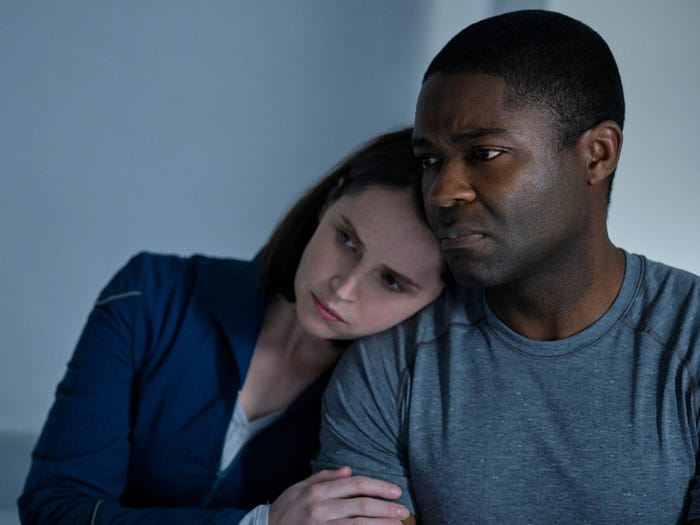 David Oyelowo recalls the first time he heard that Felicity Jones, his costar for the upcoming Netflix movie "The Midnight Sky," was pregnant.

"It was actually at the Governors Awards," Oyelowo told Insider, referencing the swanky event that celebrates the Oscars lifetime achievement award recipients. "One of the executives from Netflix pulled me to the side and said, 'little development.' And I thought whoa, what are we doing?"

Clooney was planning a way to shoot Jones — who along with Oyelowo are two of the astronauts heading home — so it looked like her character, Sully, wasn't pregnant.

It would involve shooting the Sully scenes three times: once with Jones, a second time with her body double, and a third with no one in the shot. Then with some visual effects magic, the footage would be put together so Jones' face would be put over the body double's so in the movie she wouldn't look pregnant.

Oyelowo said he and the cast did this process for a week; shooting every scene that featured Jones three times. But it was finally realized that this wasn't the best plan.

"It so went against the way George wanted to do this film," Oyelowo said. "He wanted to bring ourselves to the performances. So quite rightly the decision was made very quickly to go back to embracing that."

Oyelowo said that Clooney allowed him to use his own British accent in the movie and rename his character with a Nigerian name. So it only made sense that Jones could also perform on screen in her current state.

With that tweak, the ending was changed drastically from the ending of the book that the movie is based on, Lily Brooks-Dalton's "Good Morning, Midnight." But Oyelowo believes this was for the better.

"In using Felicity's pregnancy and my cultural background, those things enriched the film," he said.

"The Midnight Sky" is available now on Netflix.