Home » Celebrities » Demi Lovato beams as she shows off her $2.5 million engagement ring

Demi Lovato beams as she shows off her stunning ‘$2.5 million’ emerald engagement ring while shopping with fiancé Max Ehrich in Beverly Hills

Demi Lovato was in high spirits on Monday as she shopped with fiancé Max Ehrich while showing off her stunning ‘$2.5million’ engagement ring.

The 27-year-old singer confirmed her engagement to The Young and the Restless actor Ehrich in an Instagram post shared with followers in July following a whirlwind five-month romance.

And her ring, reportedly designed by Hollywood jeweller Peter Marco, is understood to be an emerald set in platinum and surrounded by trapezoid-shaped diamonds. 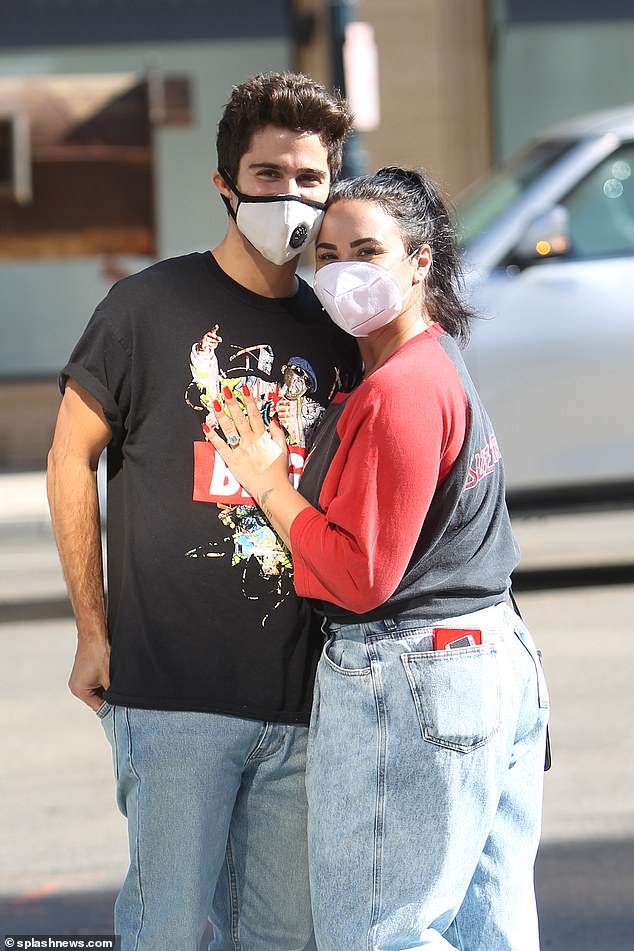 The latest: Demi Lovato, 27, and her fiance Max Ehrich, 29, were seen Monday on Rodeo Drive in Beverly Hills, where Demi donned her engagement ring that’s understood to be worth $2.5million

According to TMZ the accessory weighs between ten and twenty carats, with its estimated street value falling between $2.5 million and $5million.

The publication claims Ehrich, 29, ensured the design was one of a kind by opting for a distinctive elongated stone following a series of discussions with Marco.

Separate sources have come up with a seven figure estimate for the ring,  with one claiming it bears a distinct resemblance to the creations of celebrated jeweller Harry Winston. 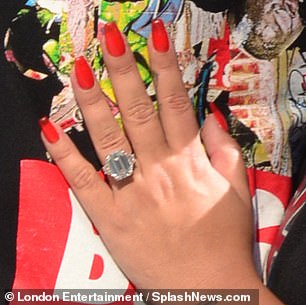 Impressive: Demi’s  ring is understood to be an emerald set in platinum and surrounded by trapezoid-shaped diamonds

Brown noted that the stone in the center must be ‘at least’ 10 carats.

He said the ring was set with ‘two-plus carat trapezoids on each side, in a Harry Winston style mounting, featuring a double claw on the prongs.’

Brilliant Earth’s SVP of Merchandising & Retail Expansion Kathryn Money told the outlet that ‘depending on the quality and specific characteristics of the center gemstone, we estimate the ring’s cost is between $450,000 and $850,000.’ 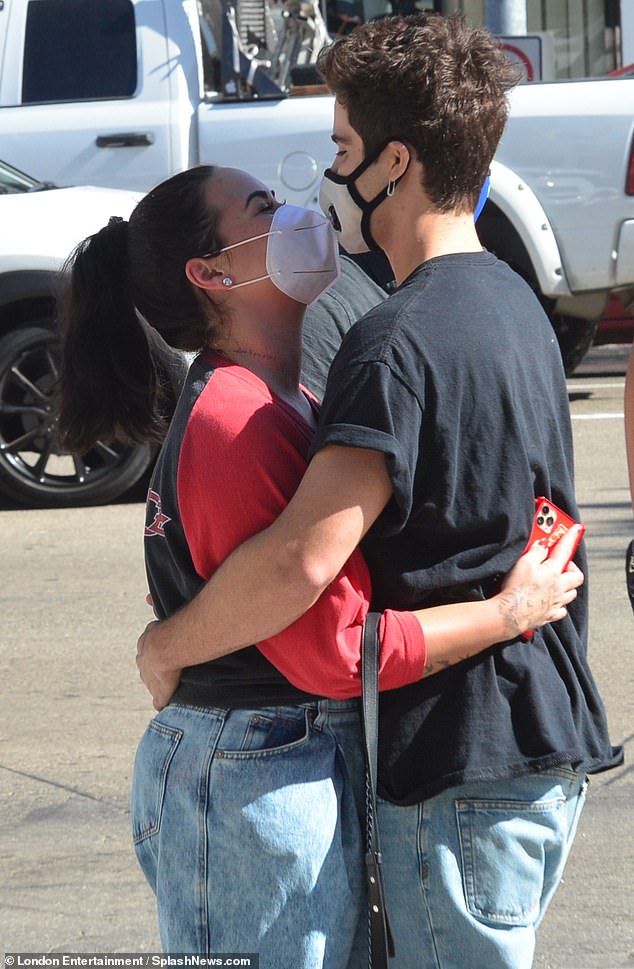 Love in 2020: The 27-year-old singer and her beau both wore masks amid strict social distancing guidelines in Southern California in an effort to contain the spread of the coronavirus

Stepping out on Monday, Demi, 27, looked ecstatic as she showed off the ring during the couple’s latest public appearance.

The Anyone artist had on a red and black top with an Ozzy Osbourne graphic with blue jeans and her dark locks pulled back into a ponytail.

She had her nails painted red as she sported the expensive jewelry in the luxe locale with brown sandals rounding out her ensemble. 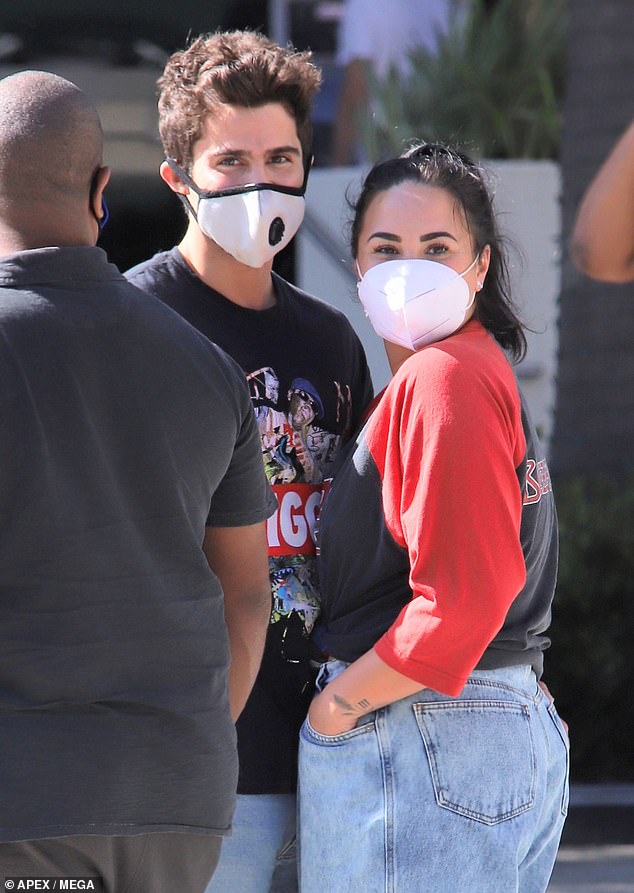 So in love: The couple of four months beamed while out in the 90210 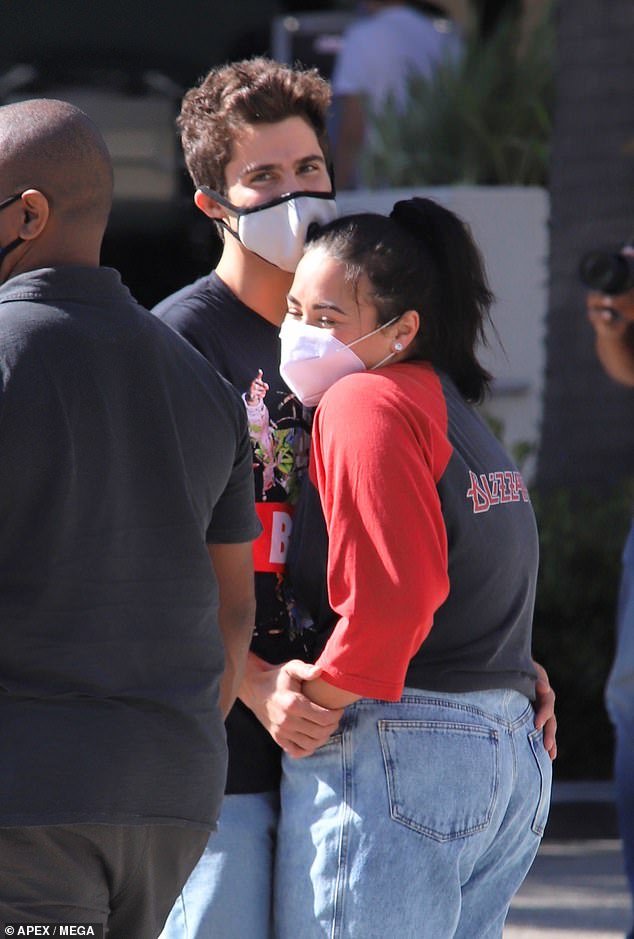 Star power: Demi sang the National Anthem at Super Bowl LIV in Miami earlier this year prior to the lockdown

Ehrich donned a black T-shirt with jeans and black sneakers as he cuddled up to the Cool for the Summer artist days after proposing to her in Malibu four months after they became a couple.

Demi, who sang the National Anthem at Super Bowl LIV in Miami earlier this year prior to the lockdown, took to Instagram last week upon her beachside engagement, sharing a shot of herself and the actor, who’s also been seen on the shows Embeds, American Princess and Under the Dome.

She wrote, ‘Best night of my life… still soaking it all up.. I love you baby @maxehrich’ to which the actor responded, ‘Love you so much baby ❤️ more and more every moment.’

Ehrich, a native of Marlboro, New Jersey, USA, added that he was ‘still floating,’ adding, ‘Love you more each and every second.’ 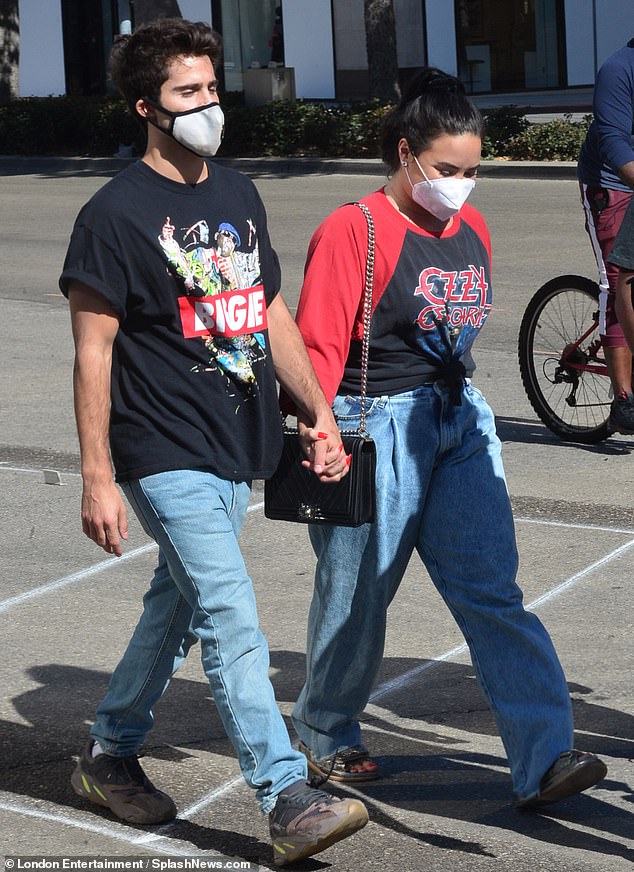 Bonded: The couple held hands as they embarked forward on their outing 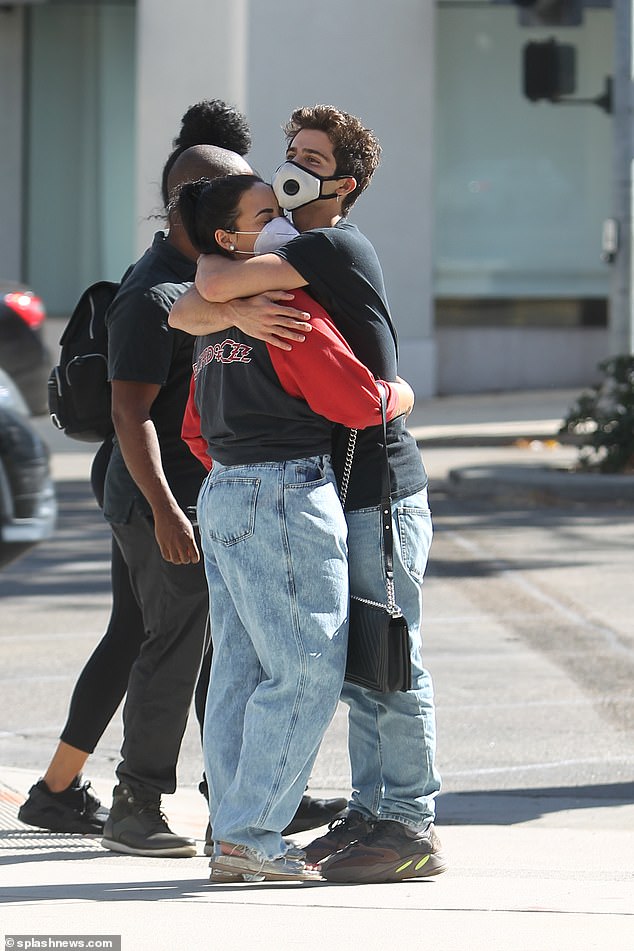 Awww! The newly-engaged duo hugged one another on the summer day