Elizabeth Hurley, 54, demonstrates herself ‘slaving in the kitchen’ as she posts VERY saucy swimwear snap to celebrate Thanksgiving

She’s known for her killer looks and enviable body.

And Elizabeth Hurley, 54, proves she has a wicked sense of humour too as she teased fans with a saucy throw-back snap posted to her Instagram on Thursday to celebrate Thanksgiving.

In the heart-racing-photo Elizabeth is sitting on top of a kitchen counter donning a black swimming costume with a plunging front showing off her ample assets.

Very sexy: In the photo posted to her Instagram  Elizabeth Hurley, 54, is sitting on top of a kitchen counter donning a black swimming costume with a plunging front

Leaving little to the imagination the actress is looking sultry into the camera whilst holding a knife in hand pretending to chop up fruit.

Showing off her toned physique and glamorous looks she captioned the photo:

‘Happy Thanksgiving- especially to everyone slaving in the kitchen. Grateful today for all my family and friends for being the best’.

Giving thanks: The actress proves she has a wicked sense of humour as she teased fans with a saucy throw-back snap and humerus caption

In another snap posted on Thursday the actress looked sensational donning a sparkling emerald green mini dress to celebrate the festivities.

The brunette beauty looked cosy at home laying on a sofa with her short one shoulder dress pulled up revealing some thigh.

Her chestnut locks were styled in loose waves which tumbled around her shoulders and she wore a dramatic makeup palette to match her sparkling ensemble. 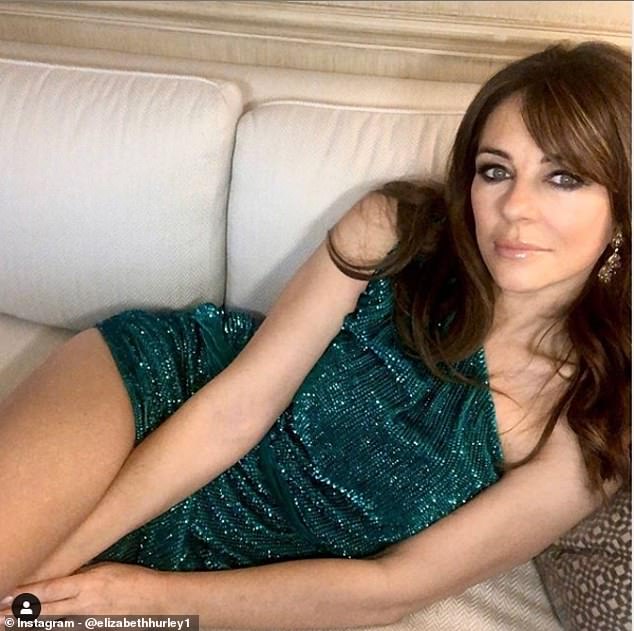 Adding to the look, Elizabeth accessorised with some statement drop earrings.

The stunning actress captioned the pic: ‘Being English, we don’t really celebrate Thanksgiving, but we still like sparkly dresses and cuddling our friends and family’.

The jaw dropper is often posting her gorgeous looks to Instagram.

Last week she slipped into a velvet black mini dress.

The garment featured long-sleeves, structured shoulders and a plunging neckline while the actress let her brunette locks fall loose down her shoulders. 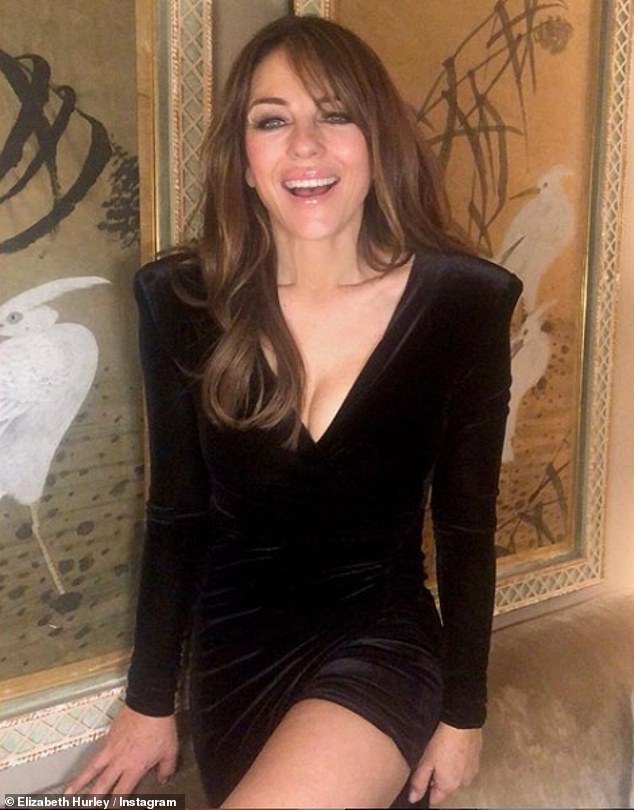 Radiant:The star looked glamorous as ever as she posted a snap of herself donning a figure-hugging black velvet minidress on Instagram

Alongside the photo, she wrote: ‘If I can’t think what to wear, I slip on a black velvet dress #timeless’.

The Austin Powers star regularly shares her sartorial looks on Instagram and last month treated her followers to a look at her Halloween costume.

Elizabeth dressed as Kill Bill character Elle Driver, an assassin who dressed as a nurse in the first film. 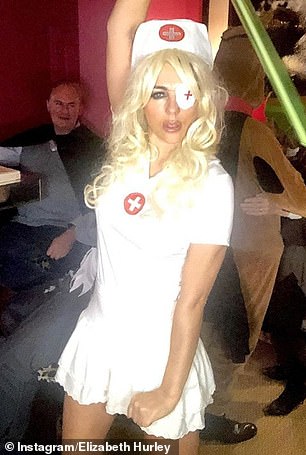 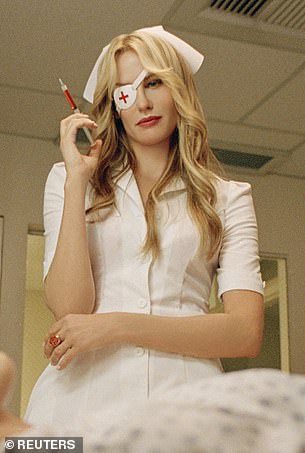 Eerie: The actress donned a tiny white nurse’s mini dress paired with a nurse’s hat and eye patch as worn by the murderer played by Daryl Hannah in the 2003 film (R in Volume 1)

She donned a tiny white mini dress paired with a nurse’s hat and eye patch as worn by the murderer played by Daryl Hannah in the 2003 film.

As well as being a busy actress and swimwear designer, Elizabeth is also a campaigner for breast cancer awareness.

Appearing on the chat show last month, she explained that she lost her grandmother to the disease, reasoning: ‘At that time, nobody spoke about breast cancer.’ 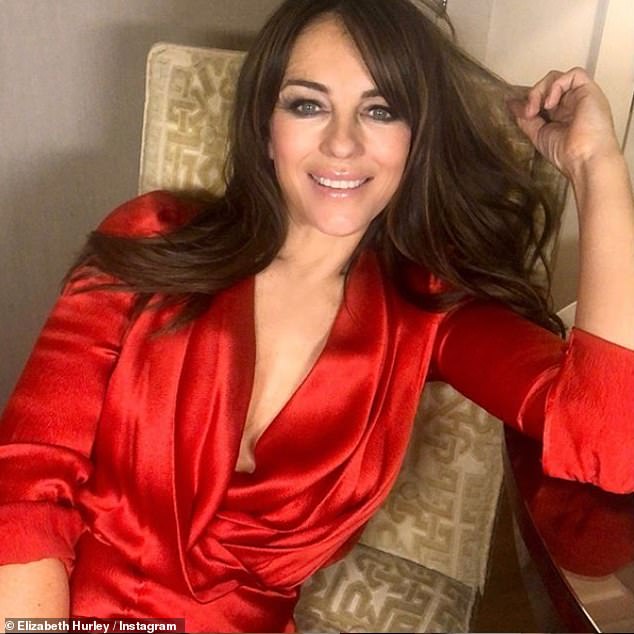 Good cause: As well as being a busy actress and swimwear designer, Elizabeth is also a campaigner for breast cancer awareness

The actress previously revealed her relative showed her scars from a double mastectomy once she finally told her family about her diagnosis, but would often change the subject.

Reflecting on when breast cancer was a taboo subject, The Royals actress explained: ‘When I started working for the breast cancer campaign, my grandmother had just died.

‘When I was told it was started because women were dying, it really rang home for me, because she didn’t talk about it. There was no awareness, no pink ribbon campaign.’

During her work as a global ambassador for the Estee Lauder Companies’ Breast Cancer Awareness Campaign, Liz said she’s witnessed ‘great changes’ in research and attitudes towards the disease. 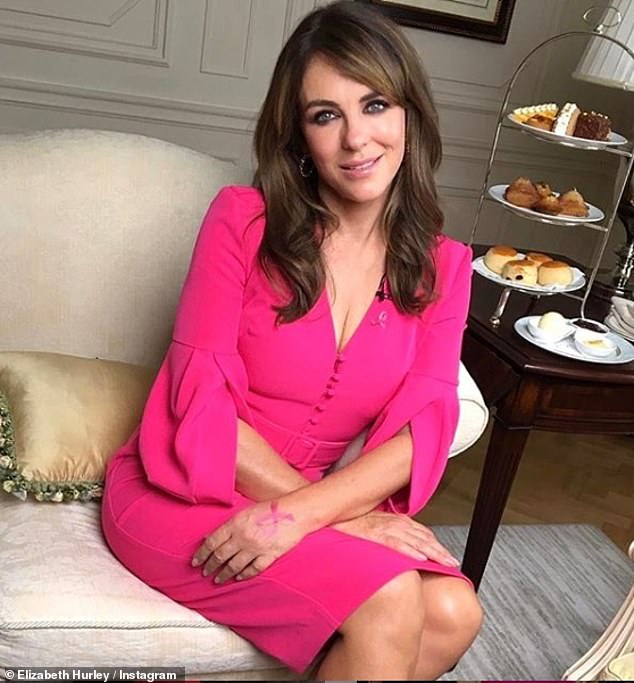