‘I gasped!’ Fans go wild as Emma Stone is unveiled as a punk Cruella de Vil in the Disney remake of 101 Dalmatians and announce ‘give her all the awards already’

Its a bold change from any role she yet attempted in her well-regarded film career.

But Emma Stone looks every inch the Cruella de Vil look-alike with a touch of punk in the first images unveiled of the Oscar winner at the Disney D23 Expo in California on Saturday.

The La La Land actress, 30, who will play the female villain in the new live action prequel to One Hundred And One Dalmatians, and sent fans wild with her bold new look. 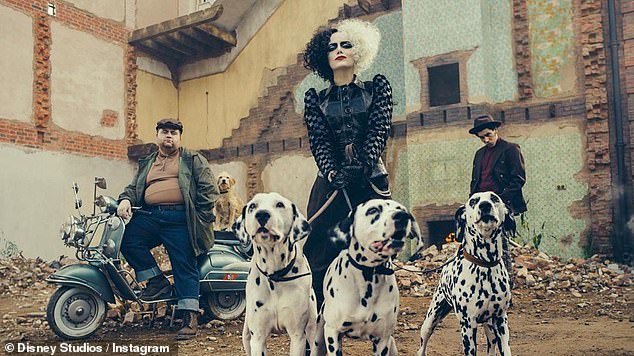 Coming in 2021: Disney have unveiled a first-look photograph of the 30-year-old Oscar winner Emma Stone as the female villain in Cruella, the new live action prequel to One Hundred And One Dalmatians at Disney’s D23 Expo in California on Saturday

Excited fans rushed to Twitter to share: ‘Yes, I know this is just Emma Stone dressed up as Cruella de Ville for some new Disney thing, but I need you to understand that I am into everything that is happening here.

‘When I tell you I GASPED’; ‘She’s so powerful’; ‘Give Emma Stone her awards already.’

In the pictures, Emma sports the characters infamous half black, half white hairstyle and a face full of heavy eye make-up and red lipstick.

The Easy A star can be seen clutching hold of the leads of three Dalmatians as she poses in a rubble filled site among co-stars Paul Walter Hauser and Paul Fry, who will play her henchmen Horace and Jasper.

The film, which is directed by Craig Gillespie and also stars Emma Thompson, is not set for release until May 2021. 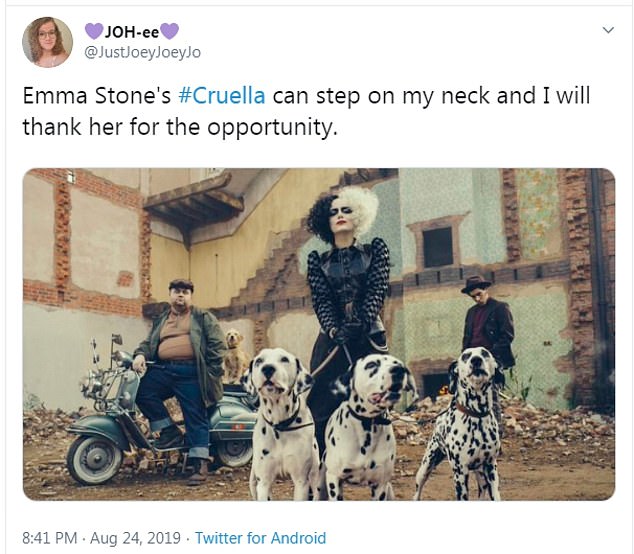 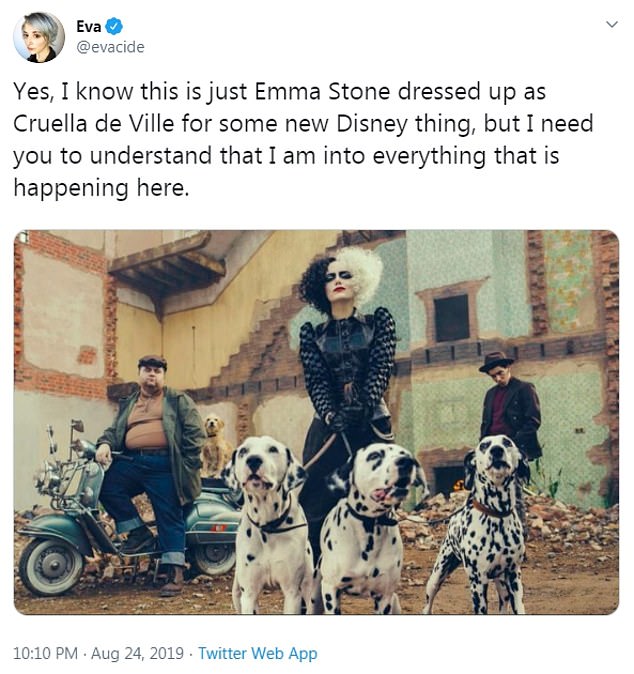 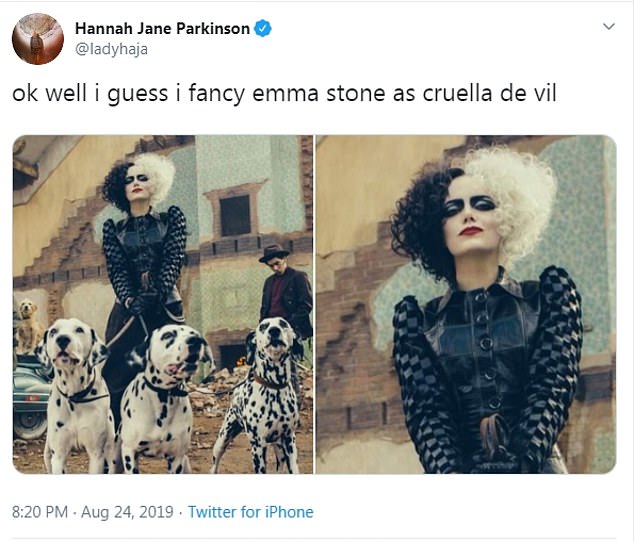 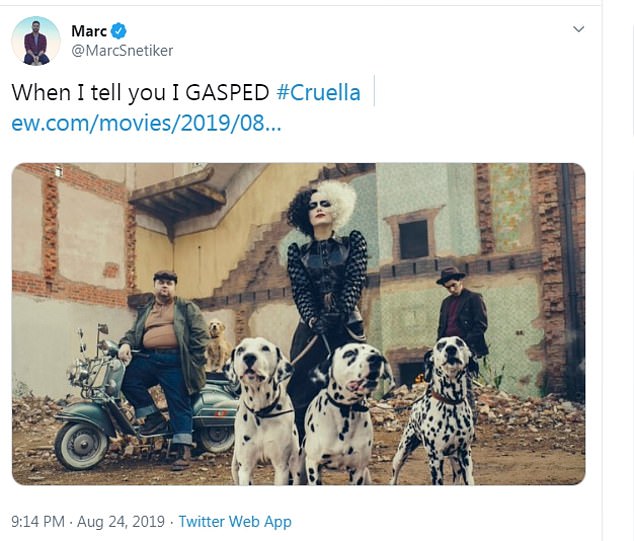 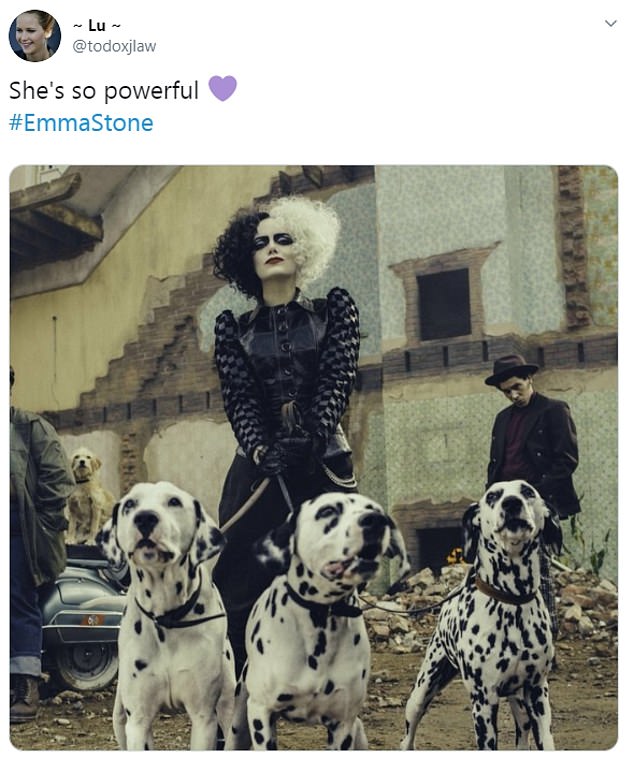 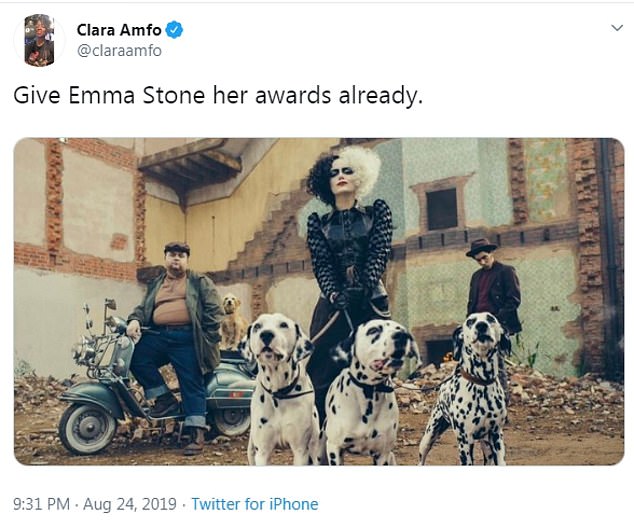 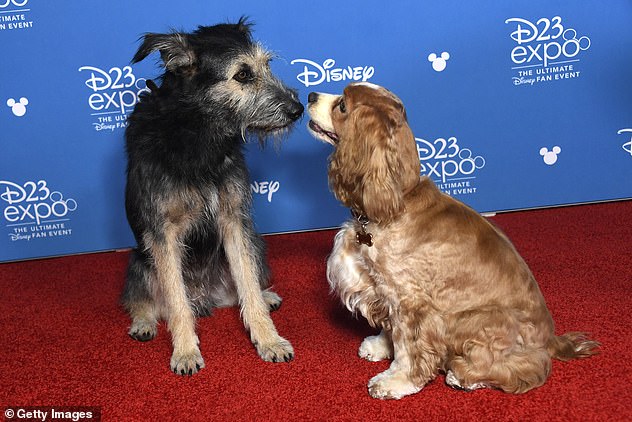 Remake: The new furry stars of the live action remake of Lady and the Tramp took to the red carpet at the event

Cruella, which is set in 1970s London, will tell Cruella’s story of how she developed her hatred for dogs.

The snap was revealed at Saturday’s D23 Expo, a major Disney fan event held in Annaheim in California.

The convention also saw the leading dogs of the new Lady and the Tramp film take to the red carpet.

And Disney have made rescue dog Monte the star of the remake of the 1955 animation, which is known for its infamous spaghetti kissing scene. 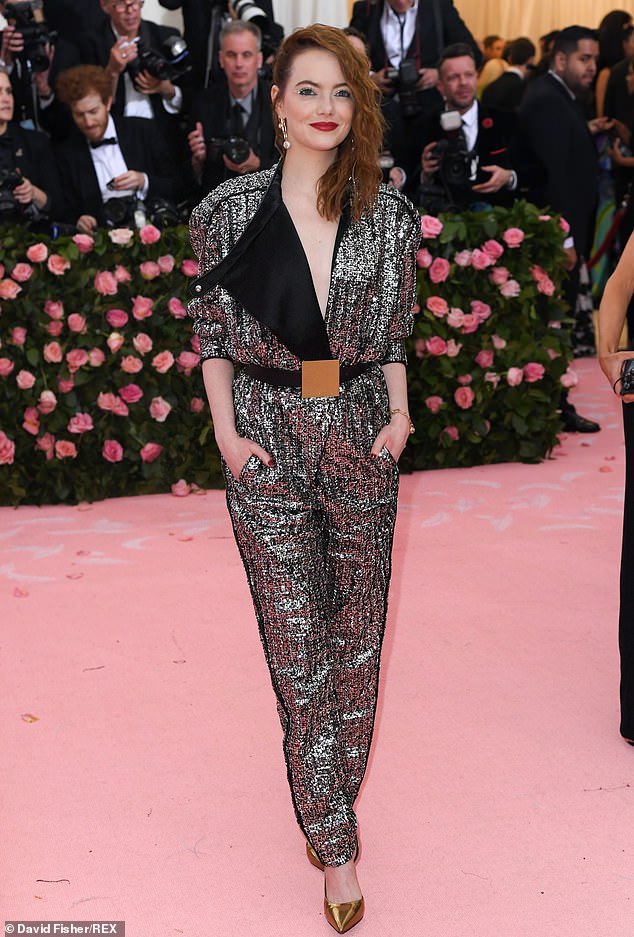 Big role: Emma is unrecognisable in the image of her as she  sports the characters infamous half black, half white hairstyle and a face full of heavy eye make-up and red lipstick

The two-year-old mongrel was taken in by Halo Animal Rescue centre in Phoenix, Arizona before being adopted by a family in California.

The black and grey mut sat alongside Rosie, a Cocker Spaniel who stars as Lady, on the red carpet.

The film tells the story of their budding romance overcoming numerous challenges along the way.

Angelina Jolie was also on the red carpet for her film Maleficent: Mistress of Evil, the sequel to the 2014 film Maleficent, which will be released in the US in October.

The 44-year-old actress wore a knee-length black dress which had a sheer top and arms and a thigh-high slit.

Her long brown hair fell past her shoulders as she posed in black pointed heels.

Mulan and Pinnochio are also being recreated. 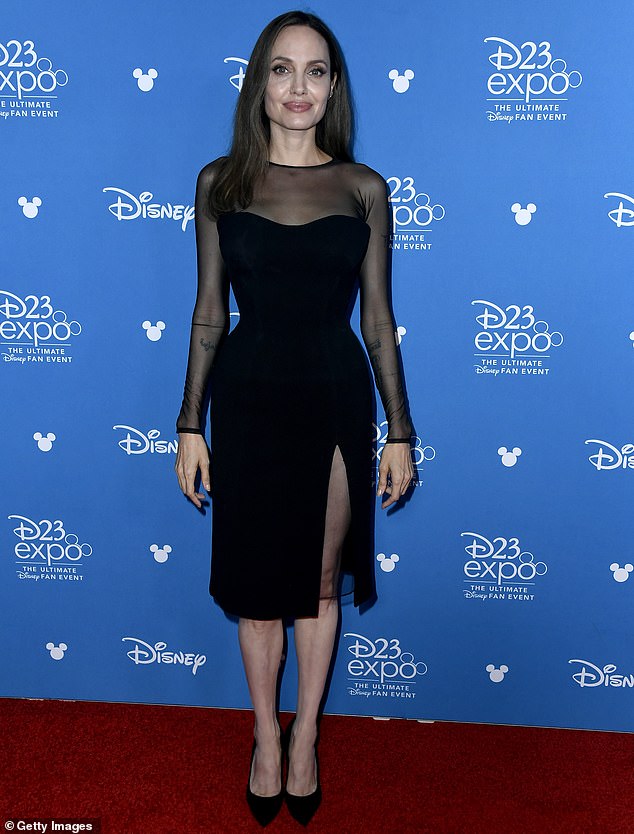 Star quality: Angelina Jolie was also on the red carpet for her film Maleficent: Mistress of Evil, the sequel to the 2014 film Maleficent, which will be released in the US in October