Faryal Makhdoom has hit out at trolls who told her she should have done more to help after she and husband Amir Khan were robbed at gunpoint.

The couple had been crossing the road in the Leyton area of East London when two men appeared.

A gun was pointed at former boxer Khan’s face and he was ordered to hand over his £71,000 watch.

Police arrived and searched the area, but the men had already fled in a getaway car; CCTV footage of the moments leading up to the robbery has since been released.

Faryal had previously written on Instagram that the incident had made her feel ‘sick to her stomach’.

Now the influencer and YouTube personality has spoken out after apparently being accused of not doing enough to help in the situation and has told trolls to ‘keep your judgemental comments to yourself.’ 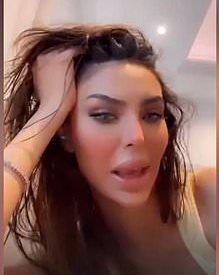 ‘You don’t know how it feels being in a situation like that, you’ve never been in it and I pray you never are in it,’ she told followers in her Instagram Stories.

‘Everyone has a lot to say… no one is a gangster when there’s a gun put to your head. No one.’

Apparently responding to suggestions she could have fought back as they were being robbed at gunpoint, Faryal went on: ‘You see two guns pointing at you, there’s nothing you can do. Nothing at all can be done.

‘The most important thing is I’m back home with my kids, we’re safe,’ she said, but added that it was ‘traumatising’.

‘I do think of it in my sleep,’ she admitted.

‘”What if this happened, what if that happened? What would happen to my kids?”‘

A spokesperson said: ‘A man aged in his 30s is alleged to have been approached by two males who threatened him with a firearm before stealing his watch and fleeing.

‘There were no reports of any shots fired or any injuries.

‘At this very early stage there have been no arrests.

‘An investigation has begun and police are following a number of enquiries.’