Helen Flanagan looks effortlessly stylish in jeans and a white vest top as she dotes on baby son Charlie, five weeks, while doing jobs at home

She’s a busy mum to her three children – Matilda, Delilah and Charlie.

And Helen Flanagan, 30, looked effortlessly stylish as she rocked a pair of cropped jeans and a white vest top while doing some housework on Wednesday.

Proving she’s every inch the multitasking mama, the former Coronation Street actress doted on her five-week-old son as she put away some dishes. 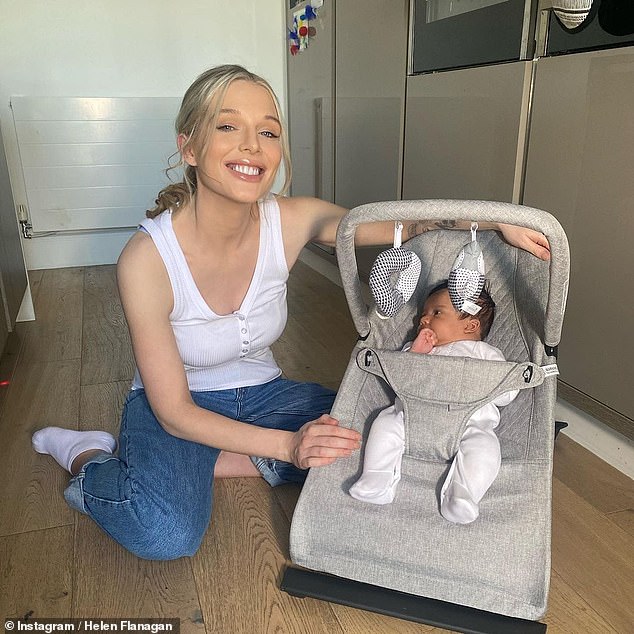 Glowing: Helen Flanagan, 30, looked effortlessly stylish as she rocked a pair of cropped jeans and a white vest top while doing some housework on Wednesday

Helen cut a casual figure in her relaxed ensemble of a sleeveless white top and light denim jeans, perfect for hanging out at home with her young children.

The blonde beauty tied back her locks into a chic ponytail and left two strands at the front to frame her face.

She also donned a full face of makeup including a touch of pink blusher and glossy nude lipstick to complete her radiant look. 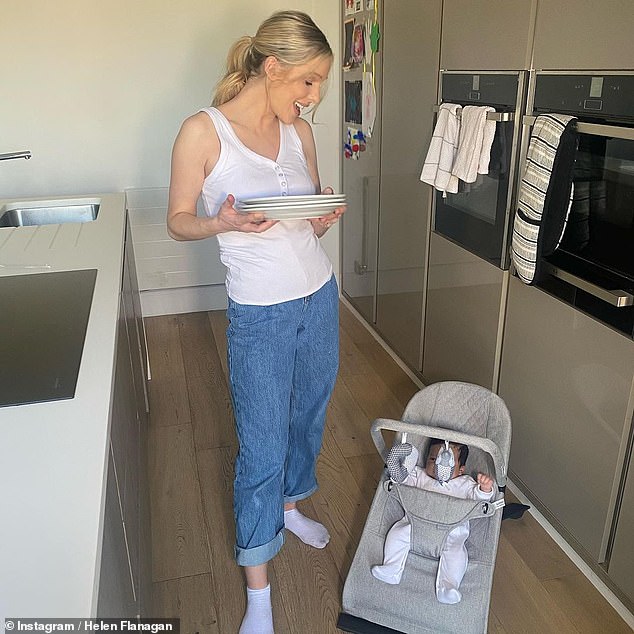 Hanging out at home: Proving she’s every inch the multitasking mum, the former Coronation Street actress doted on her five-week-old son as she put away some dishes

Baby Charlie, who was born on his dad’s birthday in March, also looked adorable as he chilled in his grey Nested Gravity Bouncer while Helen got some work done.

It comes after Helen took her little boy on a woodland walk earlier in the day and posed for a series of radiant snaps with her new arrival.

The star looked incredible in a flattering denim dress as she held her little one in a papoose during the stroll.

Helen looked completely besotted by her son who she had in the baby carrier from Artipoppe, which had a blue and white cloud design. 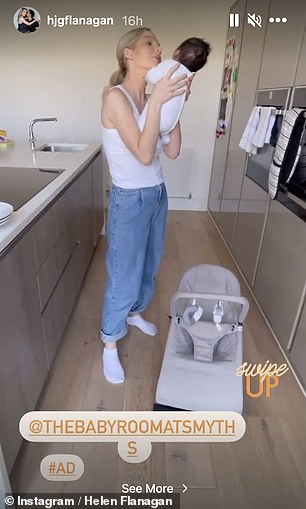 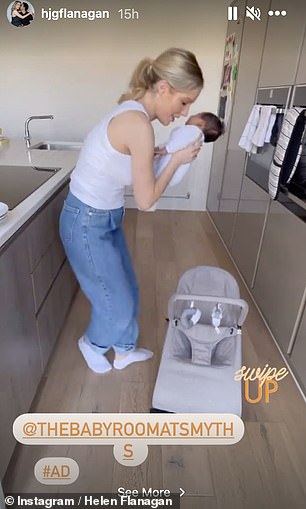 Busy mama: After lifting her son up and playing with him, Helen placed little Charlie into the bouncer so she could tidy up the kitchen 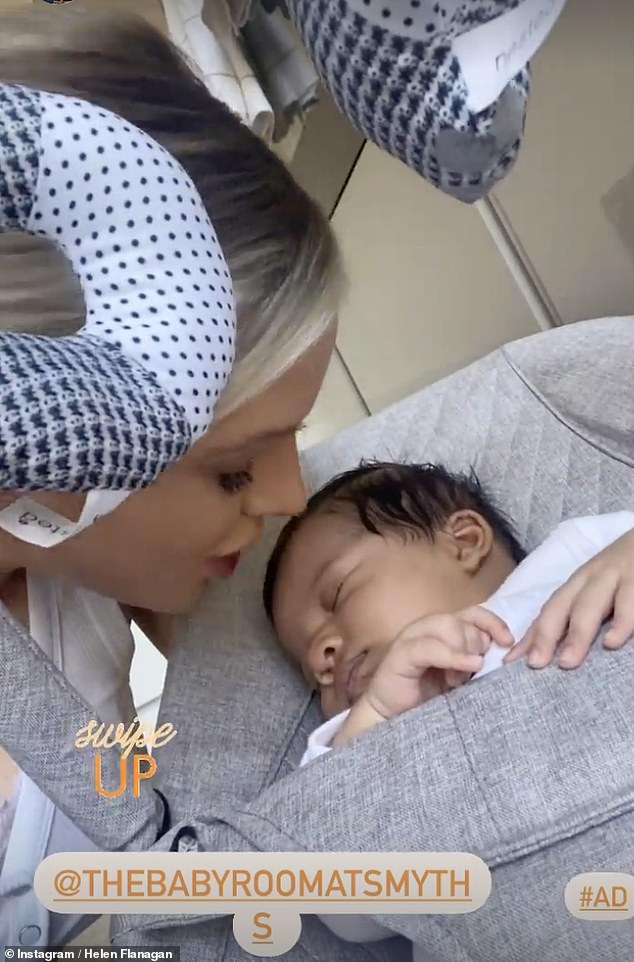 Kisses: Helen sweetly kissed her little boy’s head as he napped in the bouncer

The new mum completed her look with chunky black sandals and kept her accessories minimal.

She wore her light tresses in loose waves over her shoulders and opted for natural makeup to show off her pretty features. 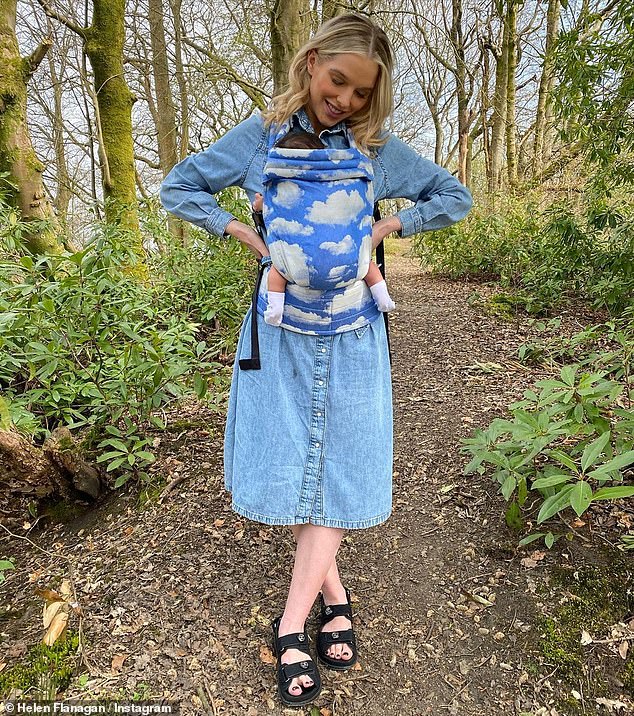 Family: It comes after Helen posed for radiant snaps with her baby son on Tuesday, looking sensational in a denim dress and black sandals 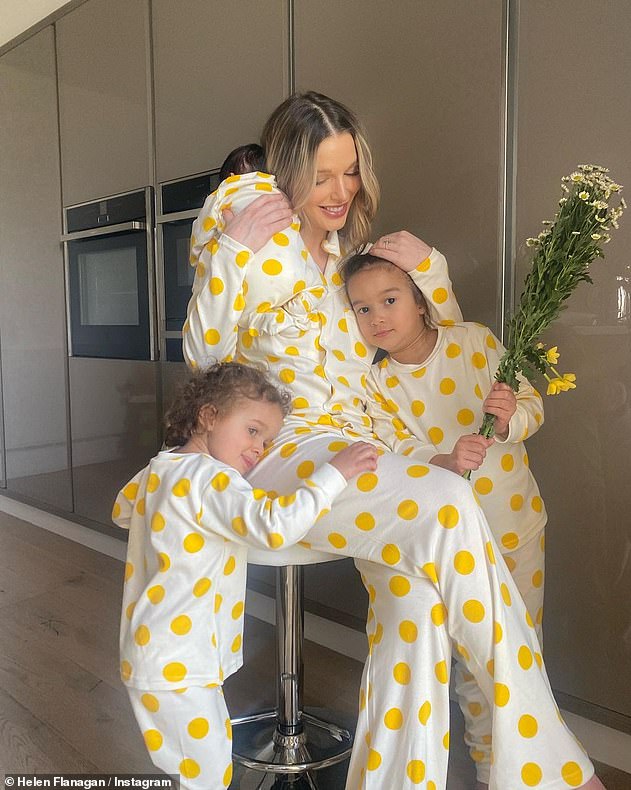 Mother-of-three: Helen is also mum to her daughters Matilda, five, and Delilah, two

The actress and her partner, 32, were joined by their eldest daughter Matilda, five, and newborn son Charlie as they celebrated Scott’s birthday in the garden at home.

Helen organised a party dome and an elaborate display of turquoise and grey balloons as she captured their intimate evening to social media.

Outside of the clear garden pod was a stylish sign which read: ‘Happy Birthday SCOTT [sic],’ and outdoor lanterns dotted across the floor.

Helen affectionately cosied up to Scott as they posed for a photo in front of the personalised party setup. 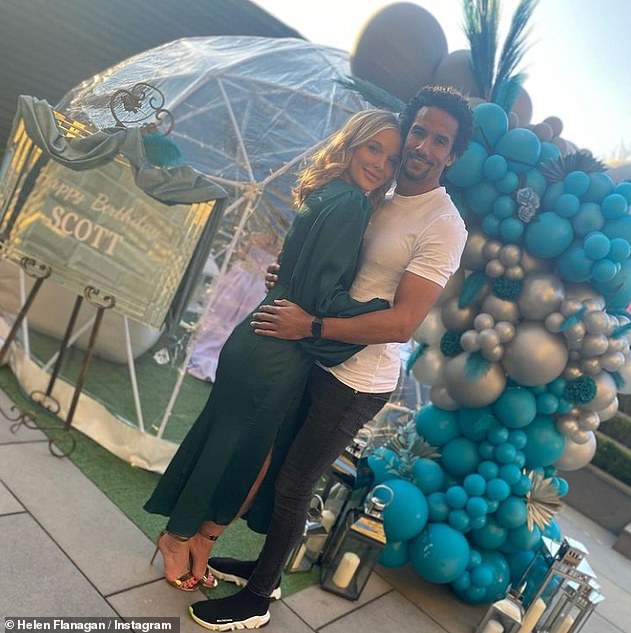