She’s already rocked a few racy ensembles for this year’s Dancing On Ice.

And Holly Willoughby was sure to maintain her stylish reputation as she donned a stunning sky blue ballgown for the show’s dance week on Sunday.

The presenter, 39, looked sensational in the demure dress which boasted a chic one-shoulder detail and floor length skirt. 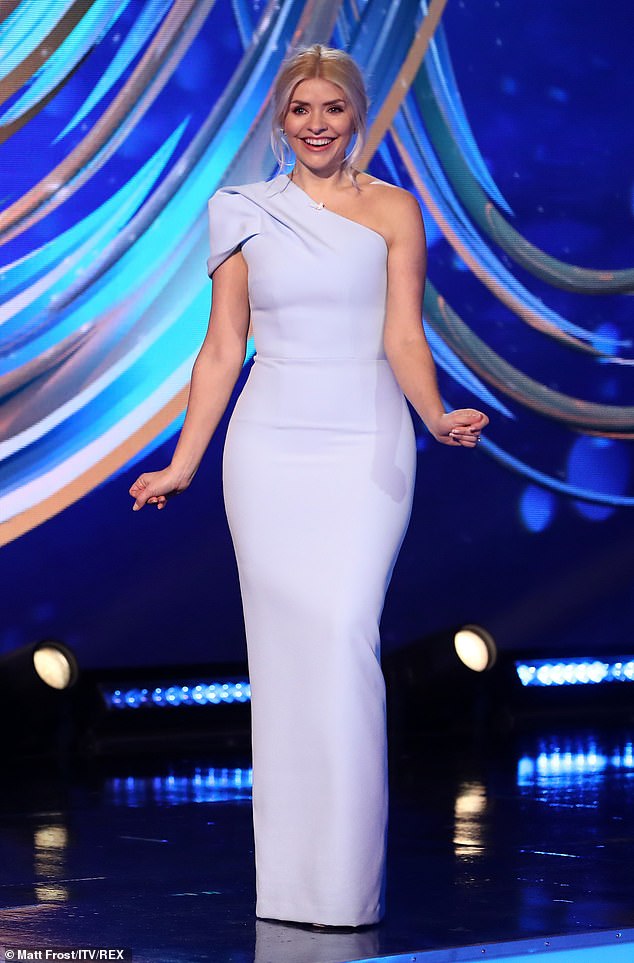 Beauty: Holly Willoughby looked sensational in the demure dress which boasted a chic one-shoulder detail as she presented Dancing On Ice on Sunday

Holly appeared to be in great spirits as she laughed infront of the camera and showcased her stunning dress ahead of the show.

The star highlighted her sensational curves in the fitted dress which came in slightly at the waist and boasted a stylish shoulder-pad on one side.

She pinned her blonde locks back into a chic do, letting two stands fall down at the front to frame her face.

Holly’s sizzling ensemble comes after she raised eyebrows with two plunging gowns to kick start the series, however she did rock a slightly less racy dress last week.

Sunday’s show also comes after a dramatic week for Dancing On Ice which saw another two contestants pull out of the show due to injury and coronavirus. 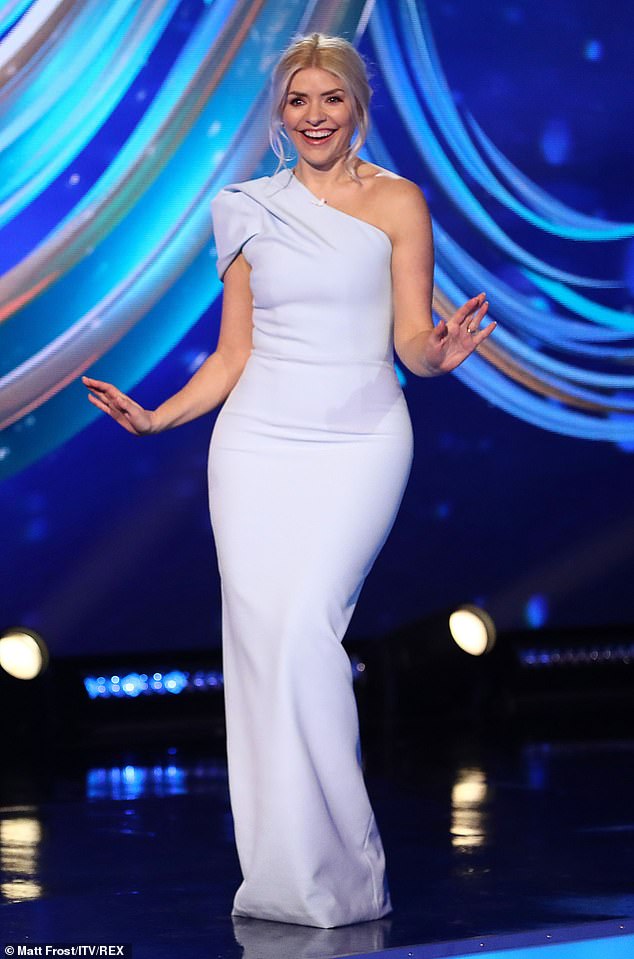 Stunning: The presenter, 39, looked sensational in the demure dress which boasted a chic one-shoulder detail and floor length skirt 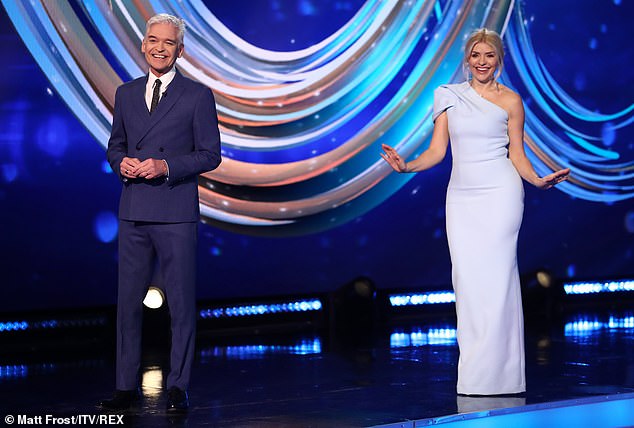 Wow: The star highlighted her sensational curves in the fitted dress which came in slightly at the waist and boasted a stylish shoulder-pad on one side (pictured with Phillip Schofield)

Billie Faiers broke her silence ahead of the episode after she was forced to withdraw after suffering a fall during training on Friday.

The Mummy Diaries star, 31, took to Instagram on Sunday morning to upload a photo of herself with professional partner Mark Hanretty from their ‘first and last’ dance as she admitted she’s ‘so, so gutted’.

Media personality Billie has become the third contestant to pull out of the competition after Rufus Hound and Denise Van Outen’s departures, with host Phillip Schofield recently revealing that bosses have ran out of reserves. 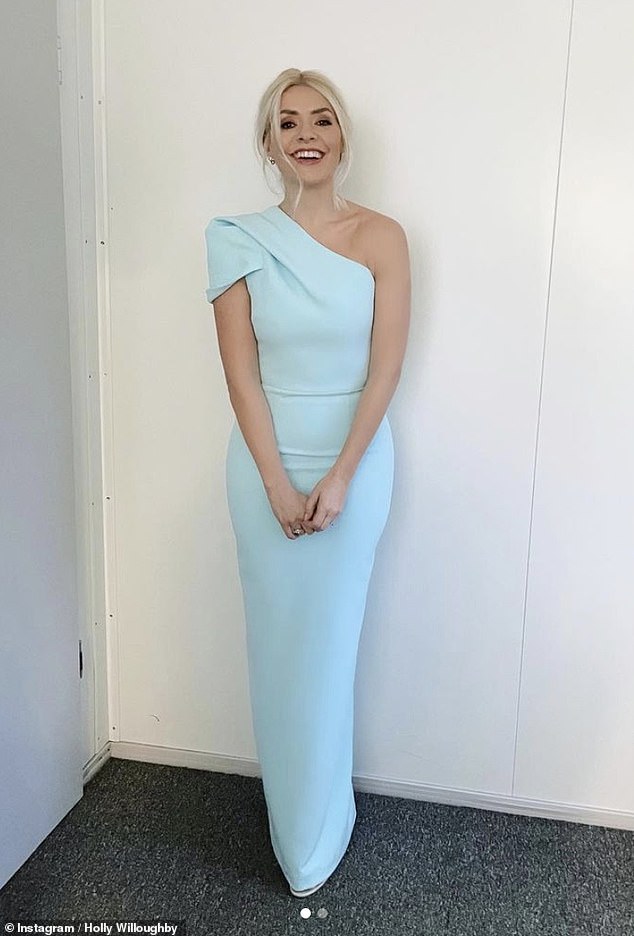 Behind the scenes: Holly gave fans a sneak peek prior to the show airing as she shared a snap of her outfit in her dressing room 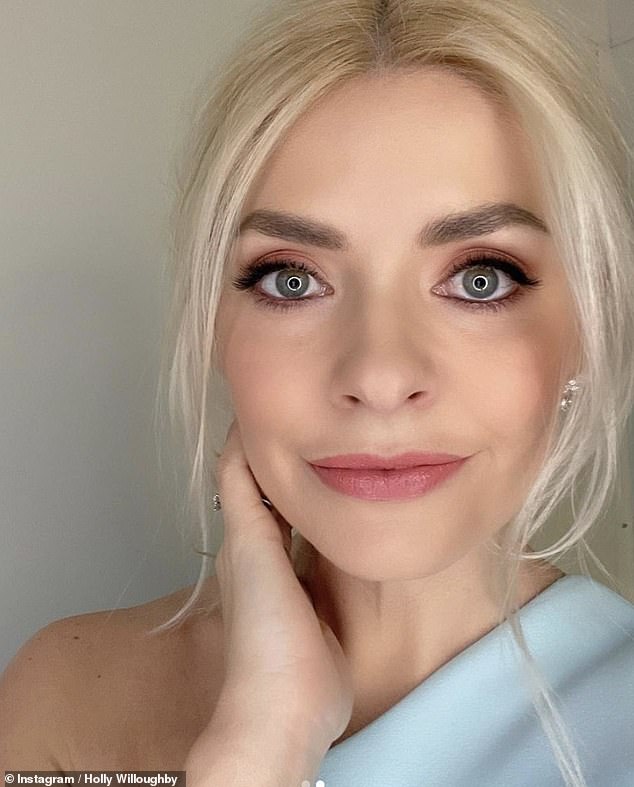 Stunning: The presenter, 39, added a touch of pink eyeshadow and styled her blonde locks into a chic up do 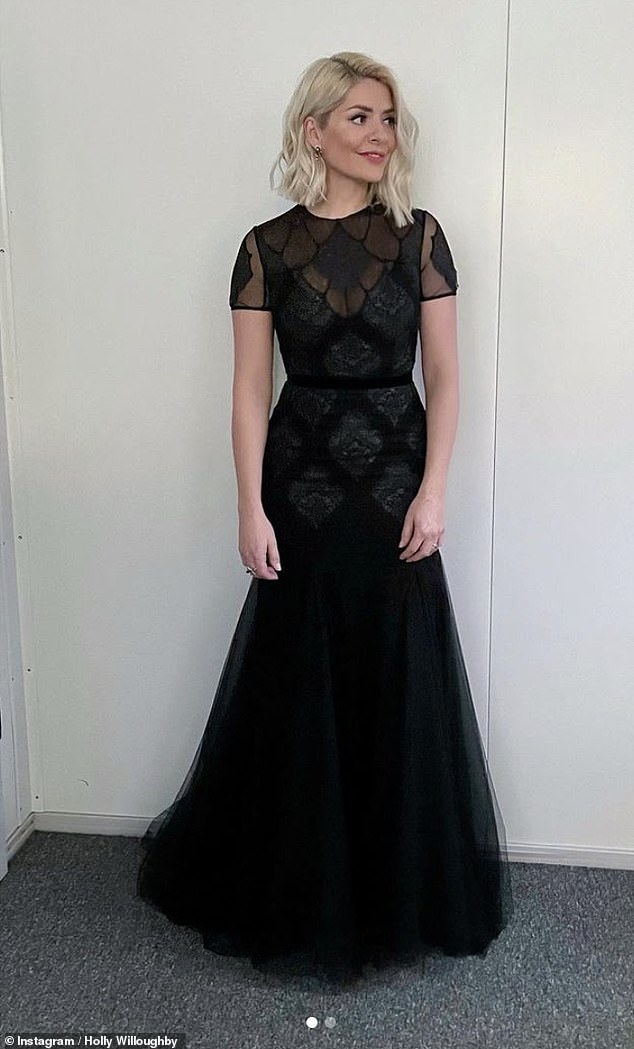 Stunning: Last week, Holly opted for another stylish ensemble as she rocked an elegant black ballgown for musicals week 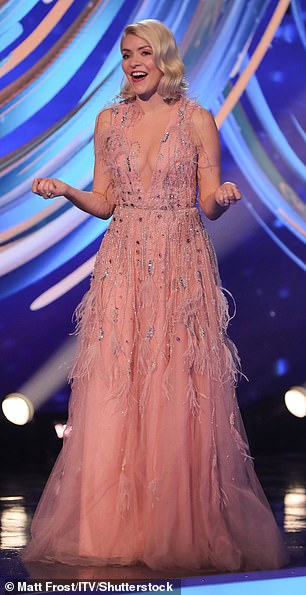 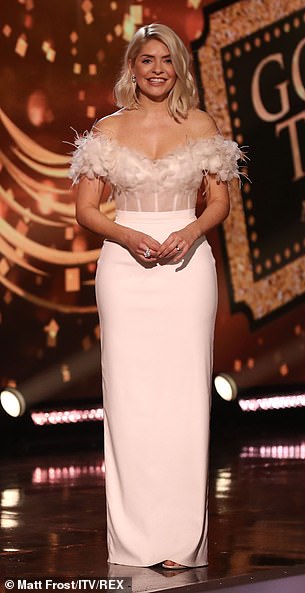 Slightly more demure: Holly sparked complaints over her first two looks on the show, with her dazzling in a plunging pink gown on the launch night and feathered white frock the week after

The mother-of-two wrote: ‘Our first and last dance. I am so so sad that our @dancingonice journey has come to an end after an accident in rehearsals on Friday causing me a head injury, forcing us out of the competition.’

The businesswoman went on to praise dancer Mark, 35, for supporting her during her stint as she added: ‘@markhanretty A true friend for life, you have been the most incredible partner throughout all of this, I mean you taught me to skate for one. 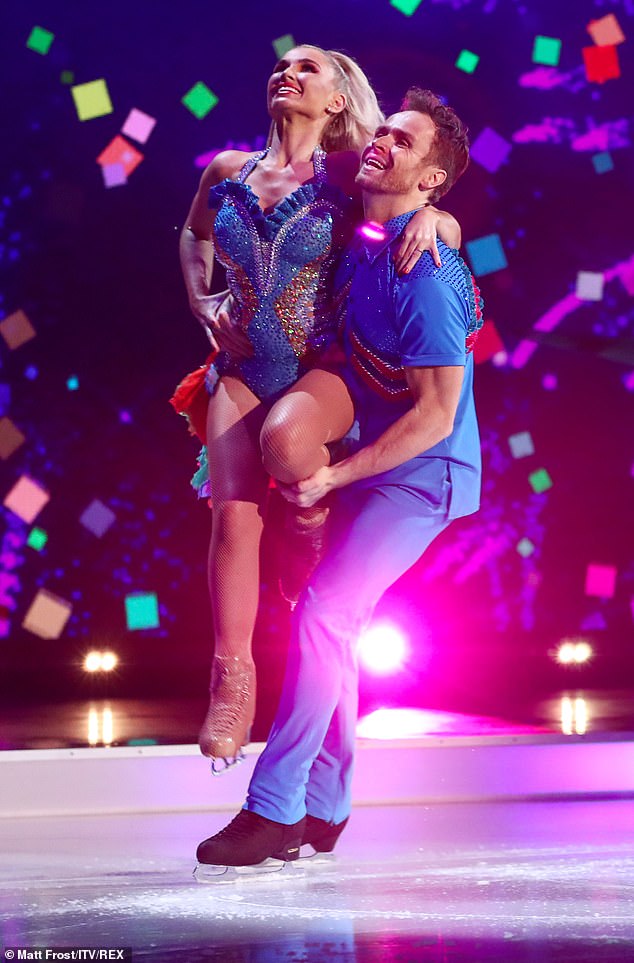 ‘I’m so, so gutted’: Billie Faiers broke her silence after she withdrew from Dancing On Ice 2021 after suffering a fall during training  (pictured with Mark Hanretty last month)

Additionally, comedian Rufus Hound took to social media on Wednesday evening to announce he has had to withdraw from the show after testing positive for Covid a second time.

His departure came after he had already missed two weeks of shows due to self-isolation – during which he tested positive with ‘a mild case’ of the disease.

Despite completing the government mandated quarantine time to recover from coronavirus, strict rules at ITV dictated he couldn’t return at all.

Earlier in the series Denise Van Outen also have to quit the show after suffering a painful shoulder injury.

Dancing On Ice 2021: A Series Of Unfortunate Events

While it was initially thought she would return to the competition, the injuries were worse than anticipated and she was replaced by Karina Manta. They were voted out on Saturday.

Denise Van Outen announced she’s quit Dancing On Ice after learning she’d fractured her shoulder in an accident during training.

The presenter, 46, shared an Instagram statement telling fans she’d withdrawn the show after being told by doctors the injury would leave her severely limited in training.

Denise will be replaced by retired Olympic gymnast Amy Tinkler, 21, who will make her ice debut this Sunday alongside pro Joe Johnson.

Billie Faiers reveals her grandmother Wendy has tragically passed away

In the wake of the news it was revealed that the former TOWIE star wouldn’t appear in the next episode of the ITV skating show following the death.

It was confirmed by MailOnline on Thursday that Billie, 31, and her sister Sam’s grandmother had passed away aged 77 from pneumonia.

Following the news, a representative for DOI revealed that Billie will miss Sunday’s show as she grieves the ‘devastating’ loss of her relative.

Rufus Hound withdraws from the show after testing positive for COVID.

The comedian, 41, took to Twitter on Wednesday evening to announce in a tweet and accompanying video message that he has sadly had to withdraw from the ITV skating competition.

Show bosses confirmed that Rufus and his professional partner Robin Johnstone have both been axed from Dancing On Ice and will be replaced by Matt Richardson, 29, and his pro-skater partner Vicky Ogden this weekend.

Billie Faiers withdraws from the show after suffering concussion following a fall in training.

An ITV spokesperson said: ‘Taking the expert advice of the Dancing On Ice medical team, she sadly cannot perform this weekend and will therefore now withdraw from the competition’

It was also confirmed that Billie would not be replaced by another celebrity.