Jennifer Lopez delighted fans with a surprise appearance at the MTV VMAs on Sunday evening.

The 52-year-old multi-hyphenate sent the crowd roaring as she took the stage at Barclays Center to present the very first award of the evening.

The recipient of the show’s Vanguard Award in 2018, stepped out in a lace-up mini skirt and flashed her famous abs in a cleavage-baring crop top by David Koma. 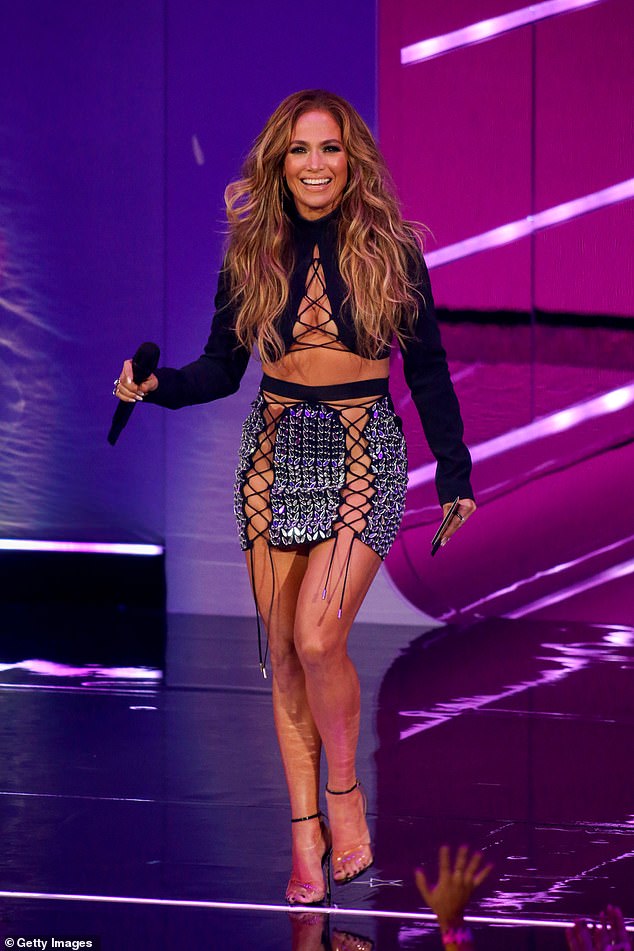 Surprise! The 52-year-old entertainer delighted the crowd at the MTV VMAs when she made a surprise appearance to present the first award of the evening 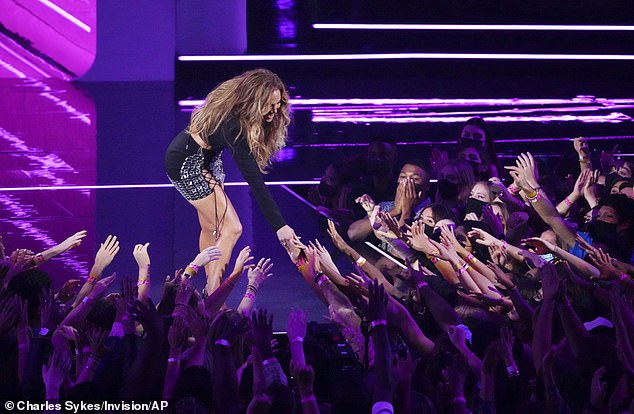 Fan love: After walking out she delighted fans as she touched hands of those in the stage pit

The stunning entertainer walked out to cheers, and got up close and personal with fans in the stage pit as she touched their hands.

Her look for the evening consisted of a jewel embellished paneled mini skirt which was laced together that exposed her incredible legs.

And she sported a matching lace-up turtleneck fashioned by David Koma, which showed off her cleavage and those world famous abs.

The Hustlers star pulled the look together with black and clear stilettos and naturally flashed her ‘JLo glow’ while beaming from ear to ear. 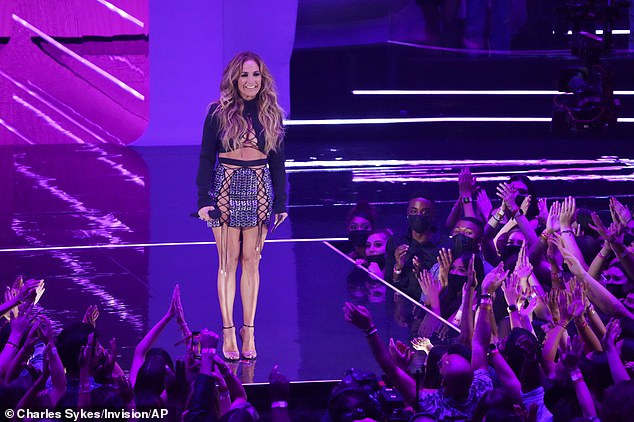 Queen: The crowd was sent into a frenzy at the sight of her 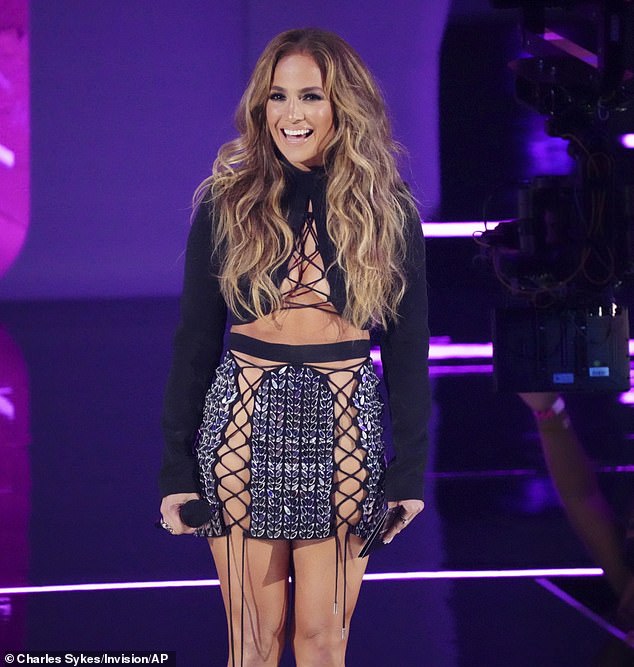 Glowing: She showed off her famous JLo glow and phenomenal figure in the outfit 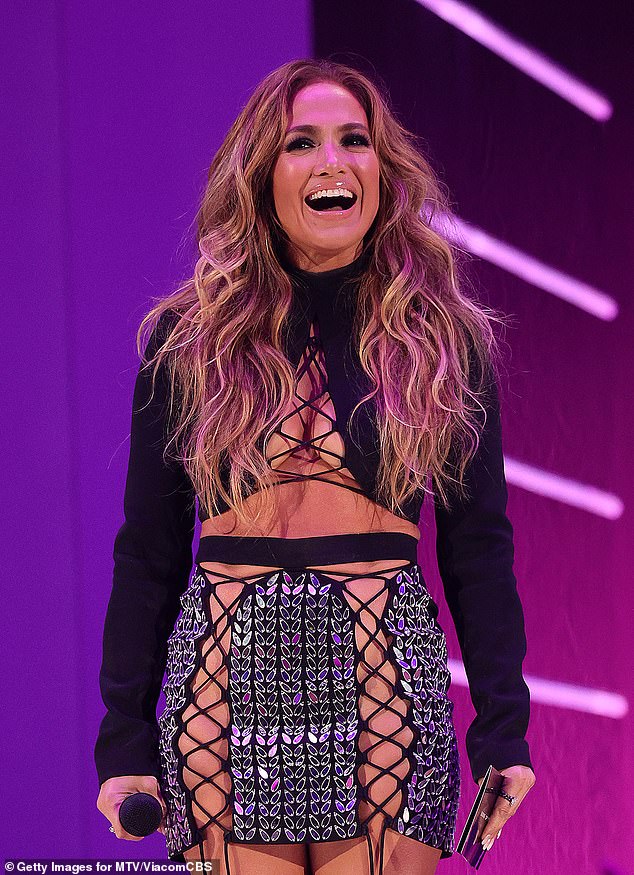 Good to be back! Lopez snagged the Vanguard Award in 2018 but returned to celebrate the 40th anniversary of the award show

‘Happy 40th birthday, MTV!’ she said on stage. ‘Tonight is your party and I gotta tell you, tonight it feels so good to be here in my hometown for the VMAs.’

The 2021 award show marks the first time it was held at Barclays in eight years.

From there JLo went on to announce that she would be presenting the Song Of The Year award which was snagged by Olivia Rodrigo for Driver’s License. 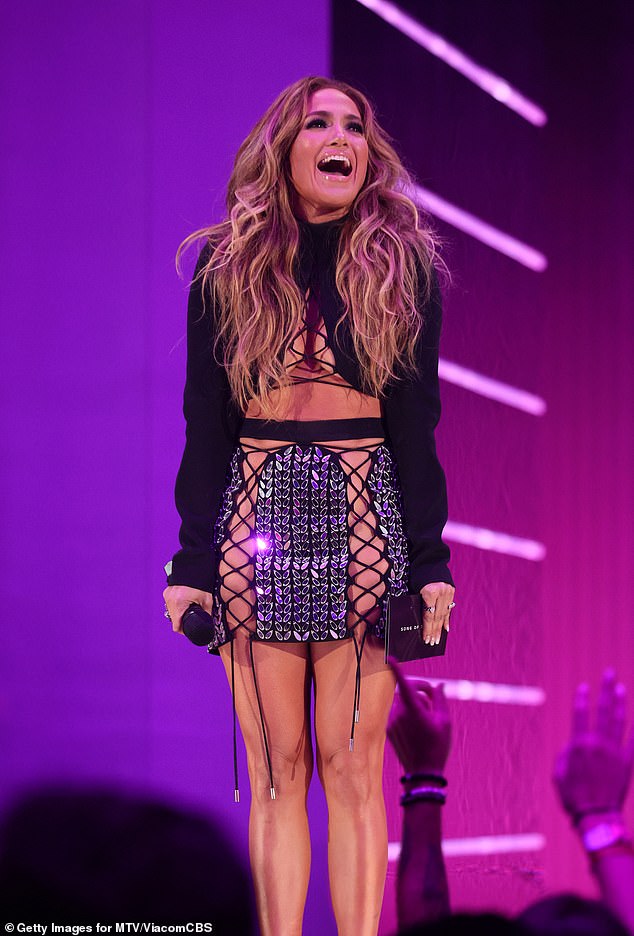 Overjoyed: ‘Happy 40th birthday, MTV! Tonight is your party and I gotta tell you, tonight it feels so good to be here in my hometown for the VMAs,’ she said 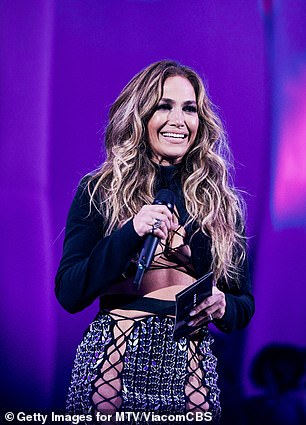 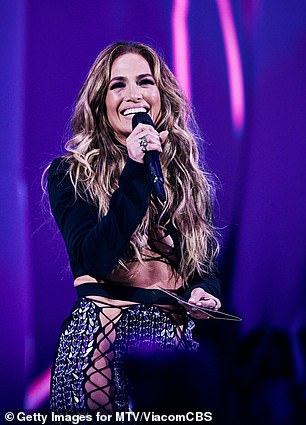 Youthful: Her look for the evening consisted of a jewel embellished paneled mini skirt which was laced together that exposed her incredible legs 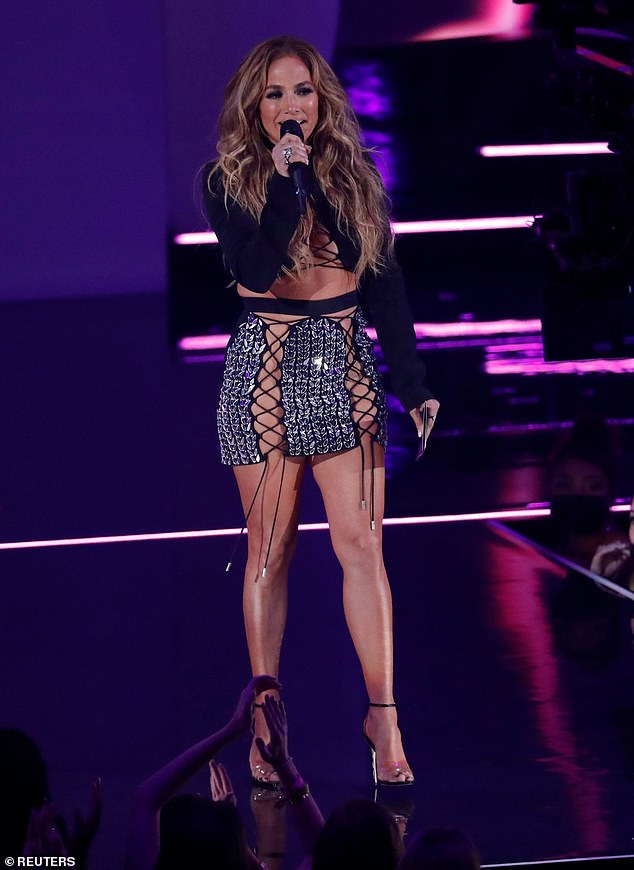 Kicking it off! Lopez presented the award for Song Of The Year at the 40th annual show

Lopez’s appearance came as a shock to many as she had been in Venice, Italy with boyfriend Ben Affleck this week to support him at the premiere of his film The Last Duel.

The two made their red carpet debut while there, but jetted out of Europe on Saturday September 11 to return back to NYC ahead of the Met Gala on September 13.

Though it was reported that Affleck had a scheduled work conflict at first, it seems likely that the pair make walk the steps of the Metropolitan Museum together. 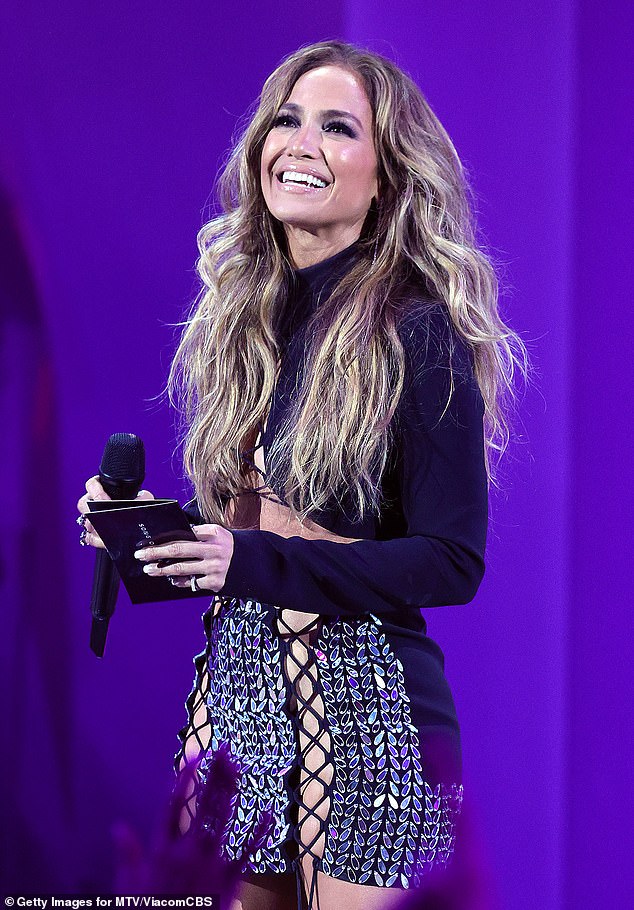 The winner is! The Song Of The Year award went to Olivia Rodrigo for Driver’s License 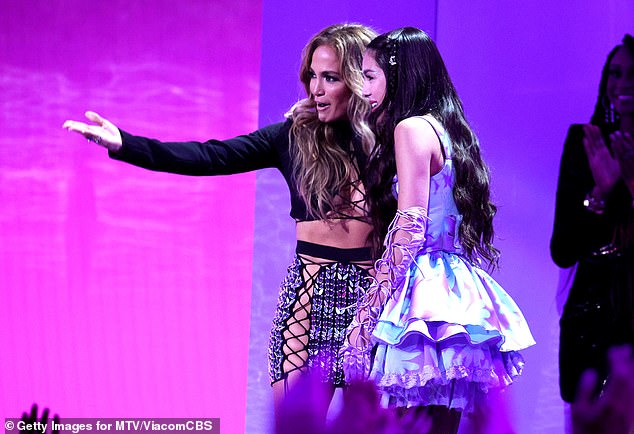 Sharing a moment: The duo were seen embracing before JLo gestured to the crowd 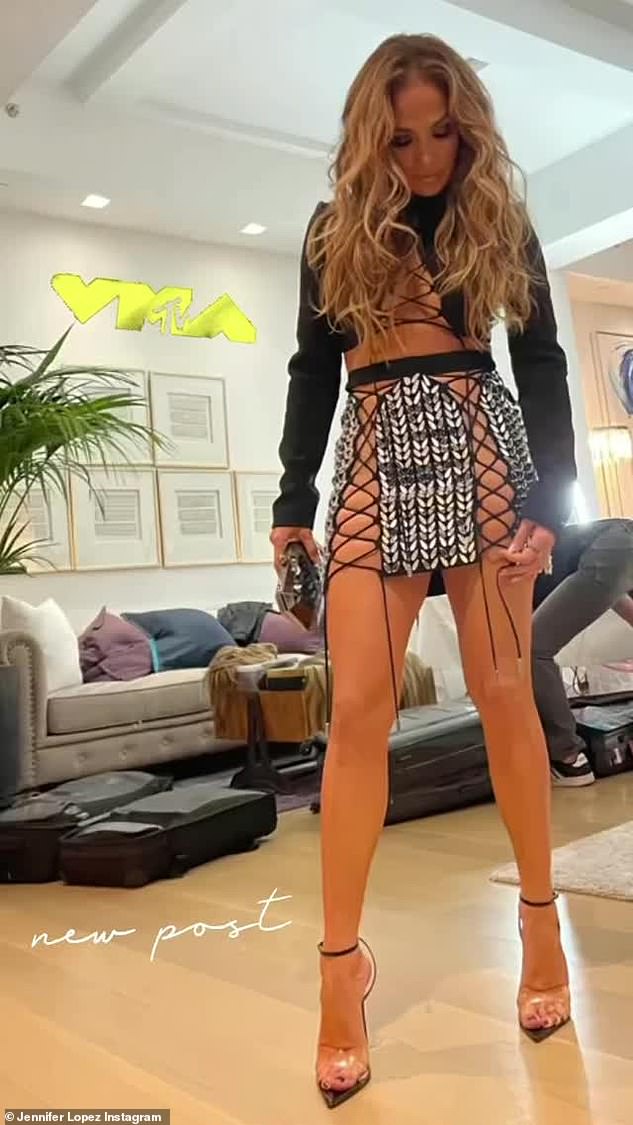 In 2018 Lopez was presented with the Michael Jackson Video Vanguard Award at the MTV show.

The award show was held in person but as COVID-19 cases continue to surge, MTV had made safety their priority with audience members wearing face masks.

The three-hour event was hosted by Doja Cat and featured performances by hitmakers including Justin Bieber and The Kid Laroi, Camila Cabello, Doja Cat, Kacey Musgraves and Lil Nas X.

Ahead of taking the stage, the Jenny From The Block singer was seen arriving in a luxury sprinter van but skipped the red carpet as to ensure her arrival was a complete surprise. 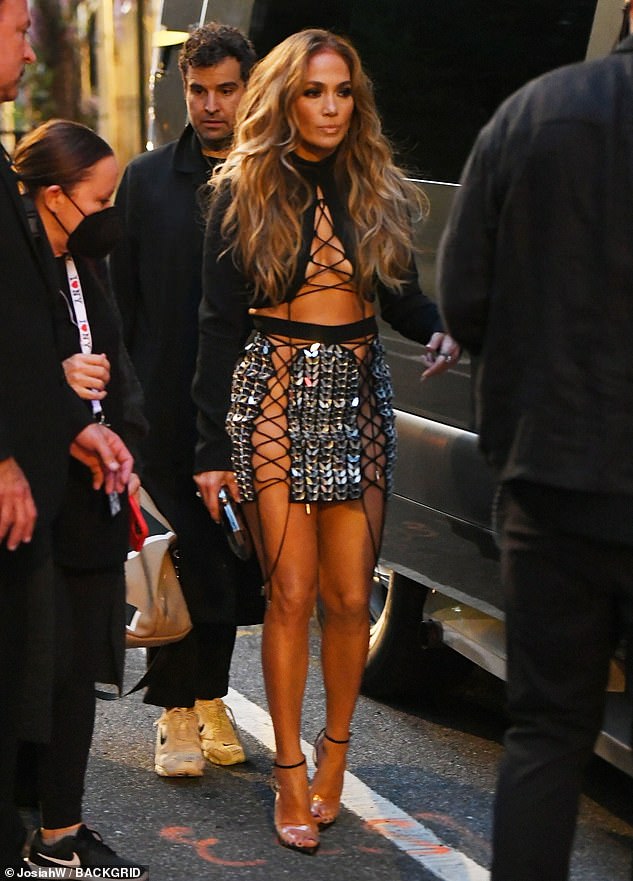 Takes a village! The superstar was seen with a team around her as she stepped into a sprinter van to head to the award show

VIDEO OF THE YEAR

The Weeknd – ‘Save Your Tears’ 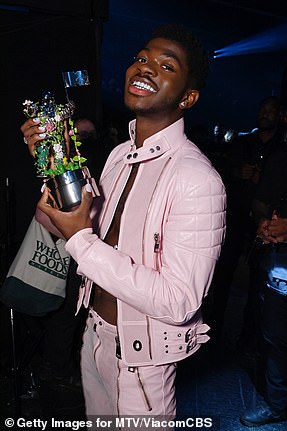 Big winner: Lil Nas X wins Video of the year for Montero (Call Me By Your Name)

ARTIST OF THE YEAR

SONG OF THE YEAR 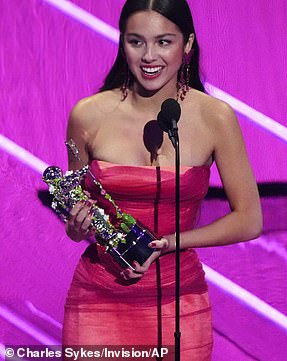 PUSH PERFORMANCE OF THE YEAR

Billie Eilish – ‘Therefore I Am’ 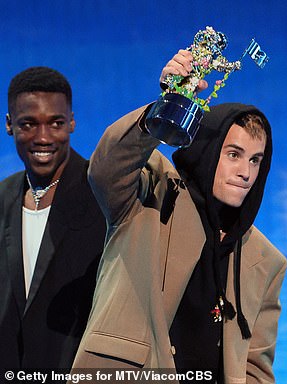 Evanescence – ‘Use My Voice’

The Killers – ‘My Own Soul’s Warning’

Kings of Leon – ‘The Bandit’

twenty one pilots – ‘Shy Away’ 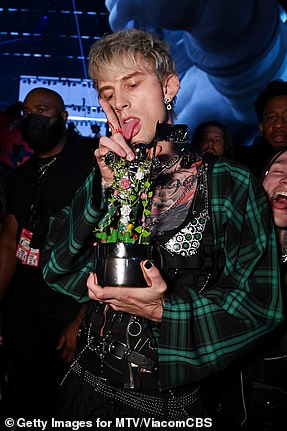 Demi Lovato – ‘Dancing With The Devil’

Billie wins: Billie Eilish wins the Video for Good award for Your Power

Billie Eilish – ‘Therefore I Am’ 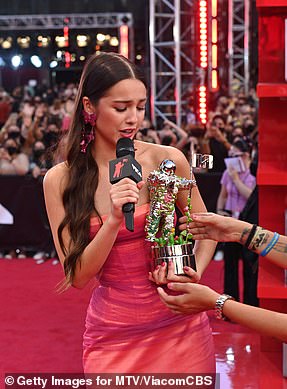 Third: Olivia Rodrigo wins her third award for Push Performance of the Year

GROUP OF THE YEAR

Masked Wolf – Astronaut In The Ocean