EXCLUSIVE: Jerry Seinfeld, 68, shows off his toned torso in a wet T-shirt as his wife Jessica, 51, looks fit in a cheeky suit as they cool off in St Barts

New York resident Jerry Seinfeld was seen taking a break from the chill of the East Coast as he enjoyed the warm weather of St Barts in the Caribbean on Tuesday.

The 68-year-old comedian, who is best known for his long-running eponymous sitcom as well as the more recent Comedians In Cars Getting Coffee, was with his 51-year-old wife Jessica.

While he chose to enter the water in a white T-shirt and shorts, his better half stripped down to a hot pink one-piece swimsuit that made the most of her impressive curves. 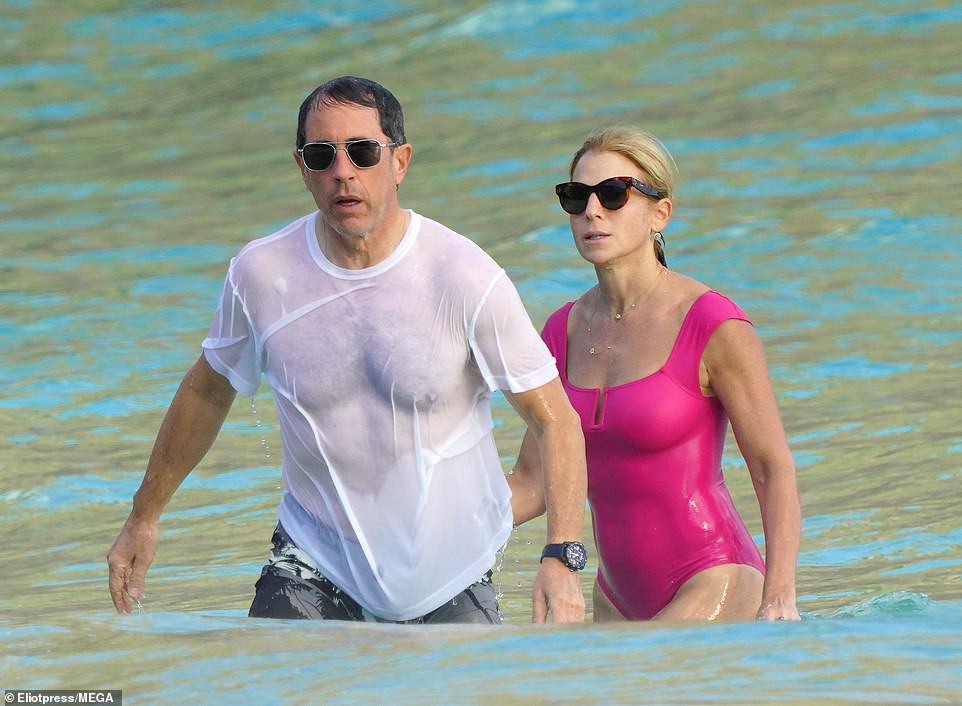 Buffed man: Jerry Seinfeld showed off his sculpted torso as he got his white T-shirt wet in St Barts this week 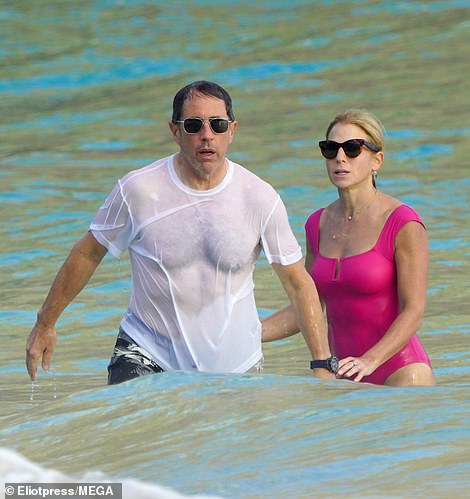 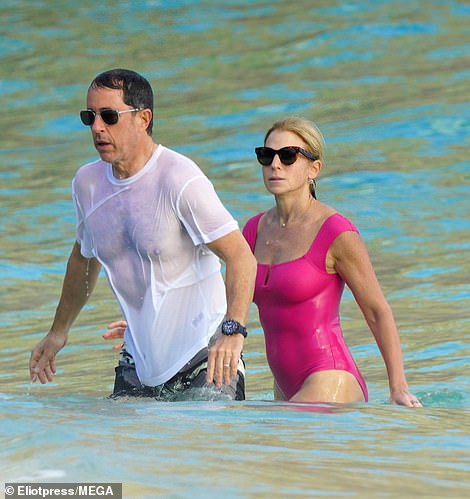 His lady love was close by: The comedian is on vacation with his wife Jessica Seinfeld. They have been married since 1999 and have three kids together

They were spotted at picturesque Gourverneur white sand beach in St Barts, which is a playground for the rich and famous like Leonardo DiCaprio and Jennifer Aniston.

At one point they stopped on the shore to take a love time out with a close hug, proving their marriage is still doing well. The couple tied the knot in 1999. 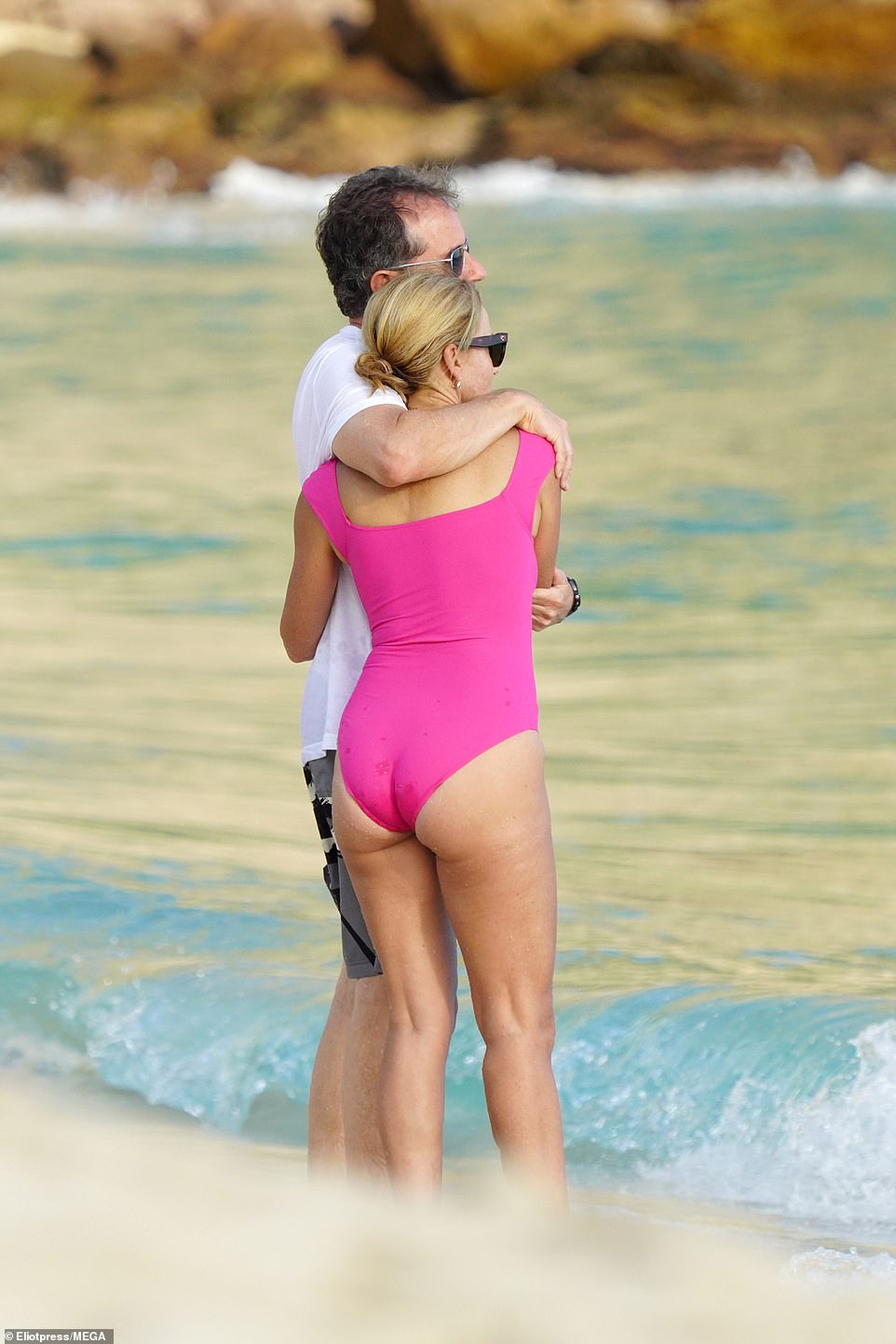 So much for: The two seem to be in sync as they enjoyed a hug on the sand while looking out at the sea 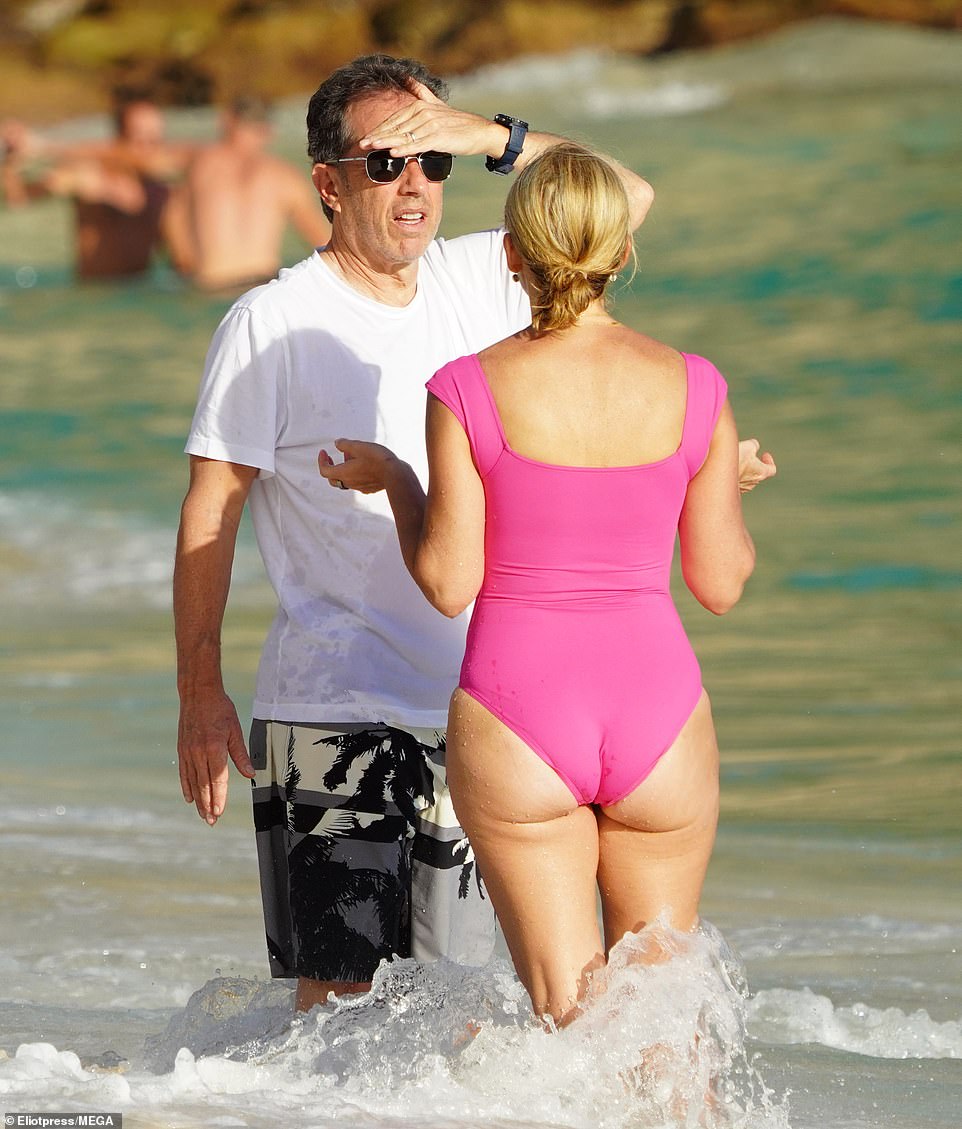 Cheeky mama showed some skin: Jessica flashed her bottom in the suit that didn’t seem to have enough material 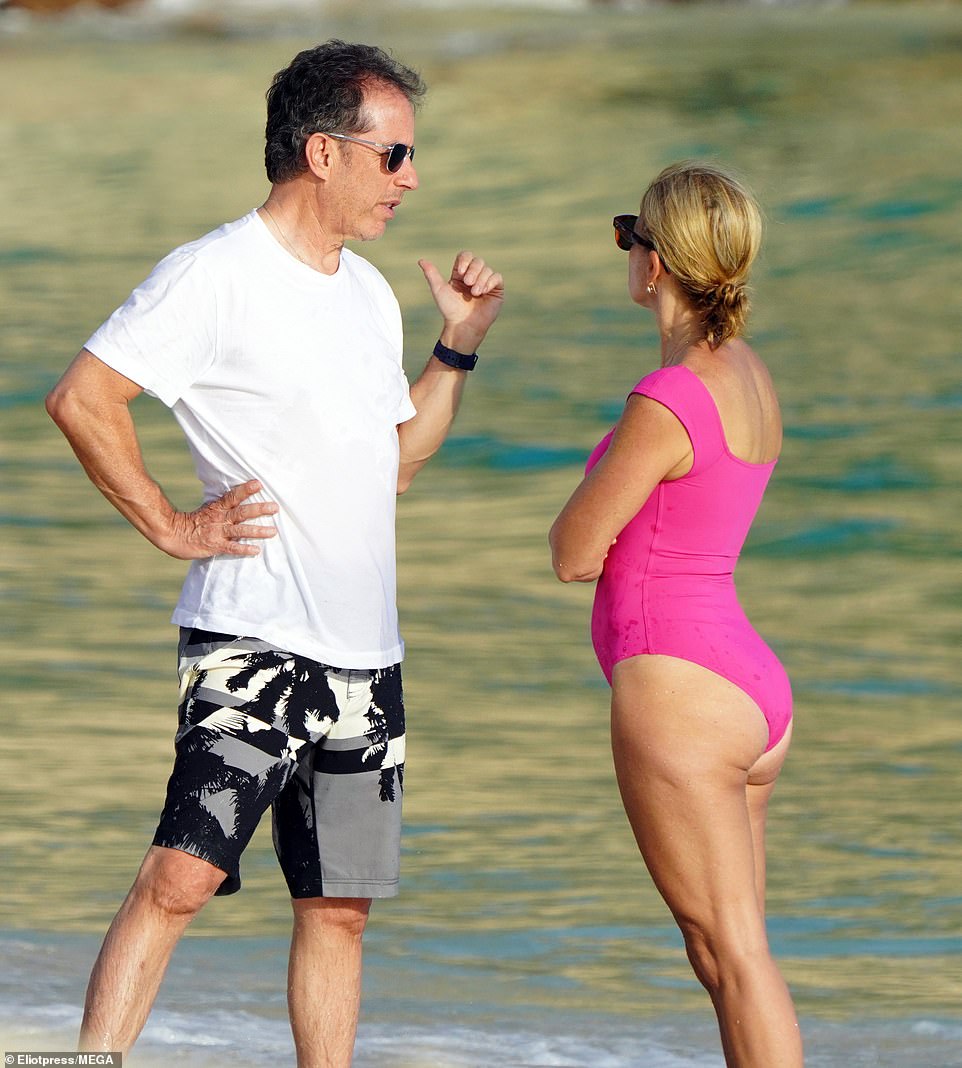 Before the swim: The couple talked side by side on the white sand beach before they entered the water 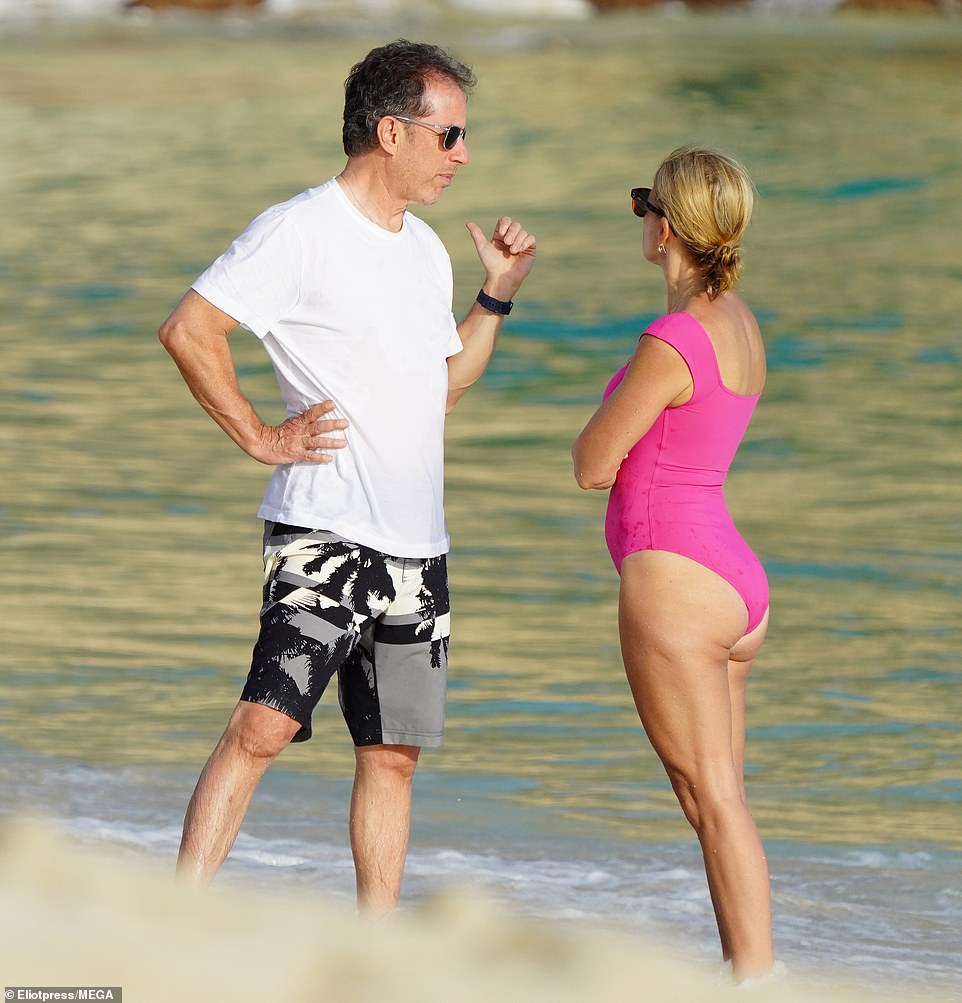 Another look at this lady: Her bottom was also visible from a profile view proving this suit was working overtime

The children were not seen during this beach outing as it seemed to be just for the lovebirds.

The pair walked into the ocean side by side as they got drenched with the sea water.

After getting wet, Jerry’s shirt was dripping wet, and also showed off his chest as it became sheer. The see-through shirt made it clear that he has stayed in good shape as his torso looked sculpted.

He still had on his black tinted, silver framed sunglasses.

His wife Jessica looked just as fit with muscular arms and strong legs. Her suit was un usual as it had wide straps that covered much of her shoulder. 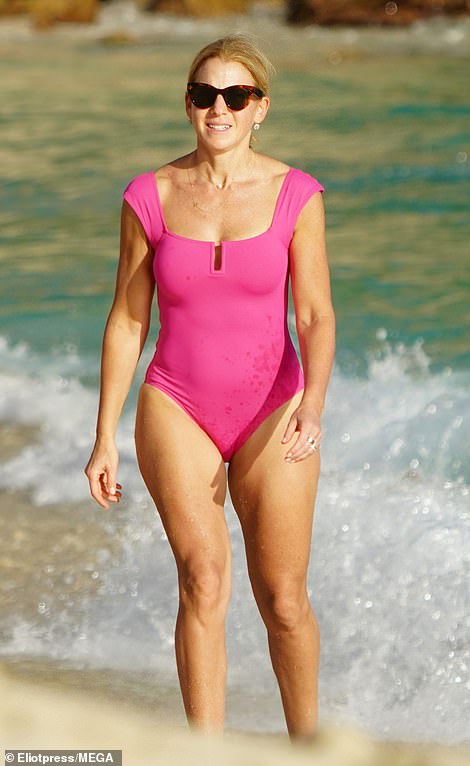 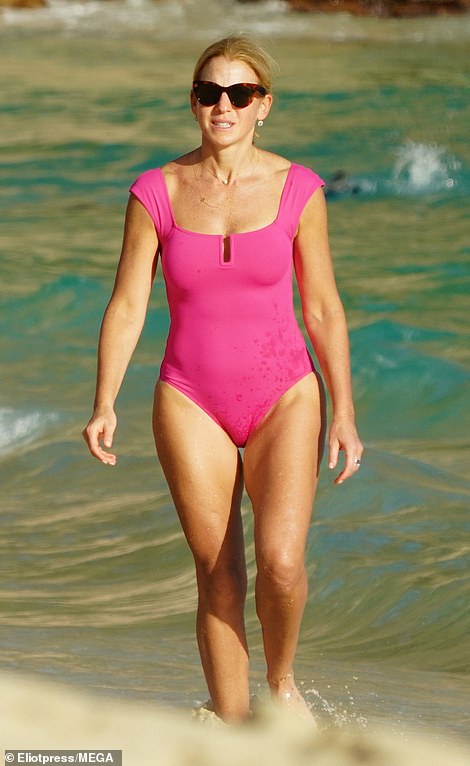 She must run on the treadmill a lot! The cookbook author from Oyster Bay, New York, has a small waistline. And she also has strong leg muscles 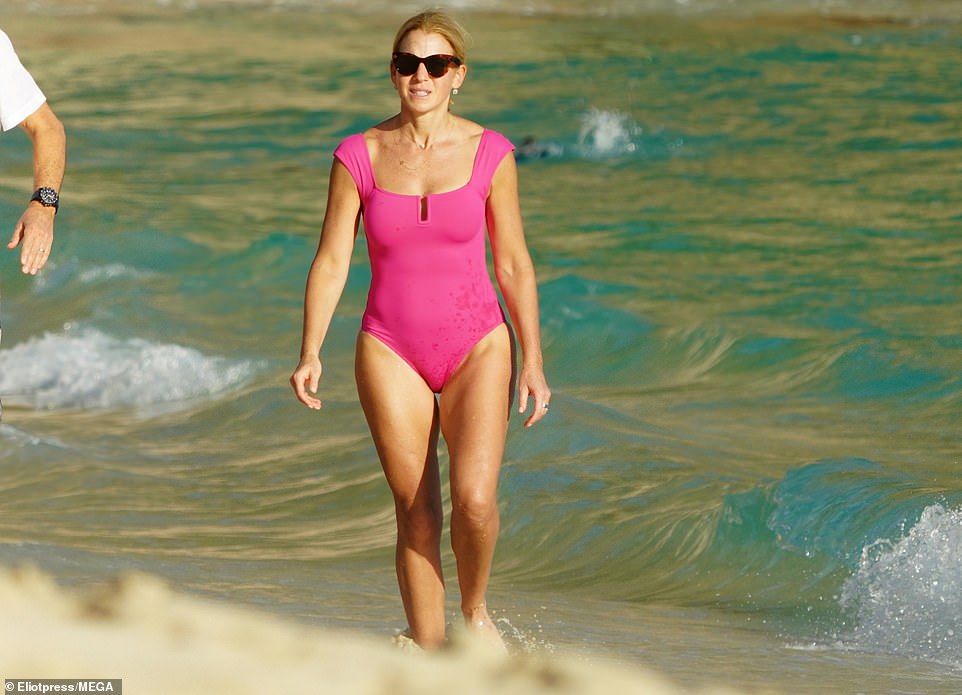 On edge a bit? She did not seem to be in a relaxed mood as she failed to crack a smile in the tropical paradise

The front had a small cut like a narrow keyhole that added sexy appeal.

She did not get her flaxen hair wet; the locks were pulled back into a low ponytail. The star kept her black and tortoise shell sunglasses on for the dip. And she also had on earrings as well as thin gold necklaces.

Lately Jerry has been working on the film Unfrosted: The Pop-Tart Story which is his directorial debut.

Melissa McCarthy and Hugh Grant are among the A-list cast members starring in the film. 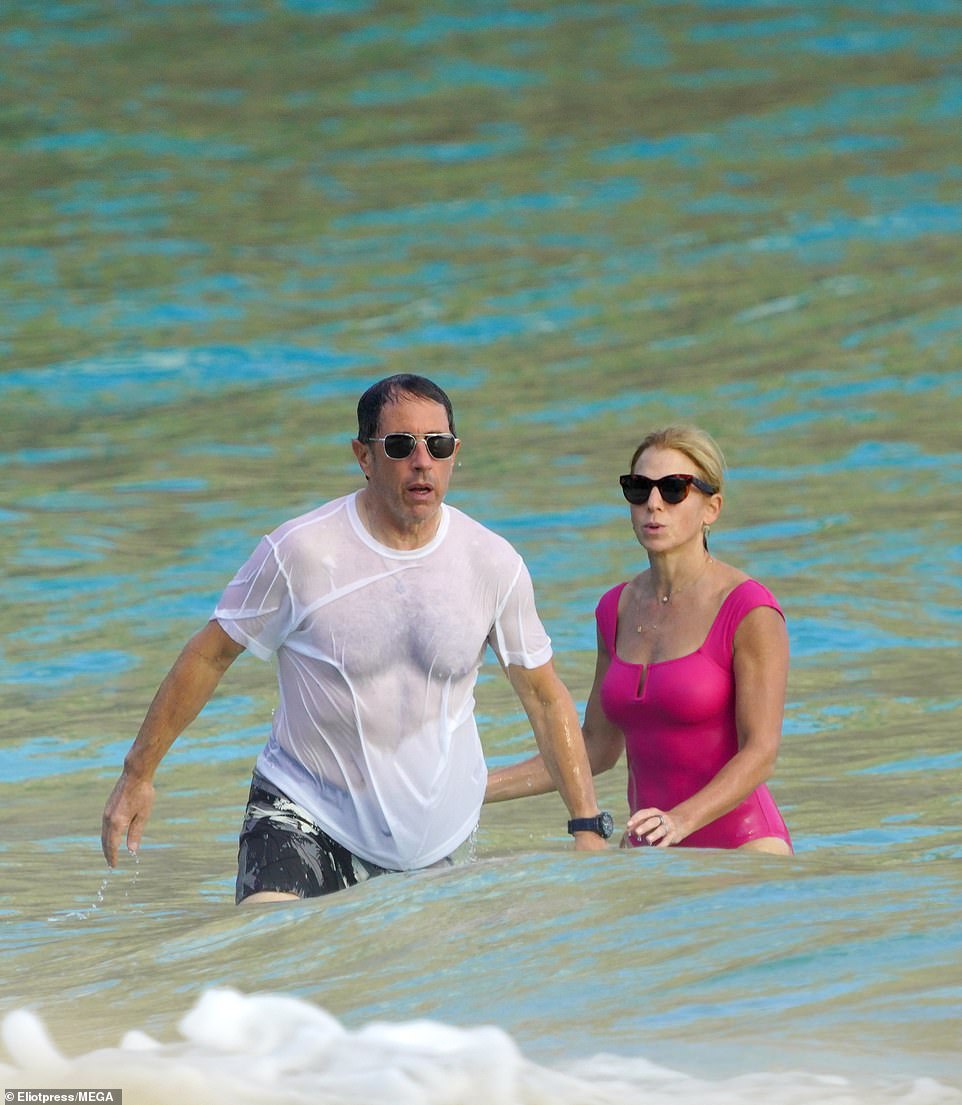 Not in a mood for a long swim: The pair only went waist deep into the ocean as the waves seemed to be relatively strong 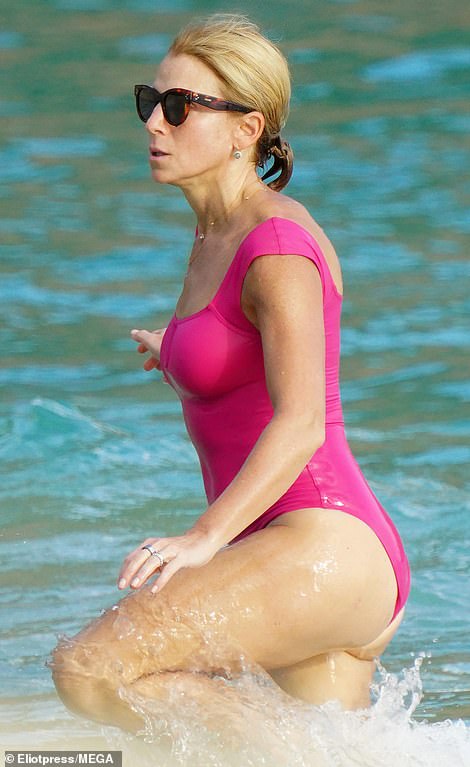 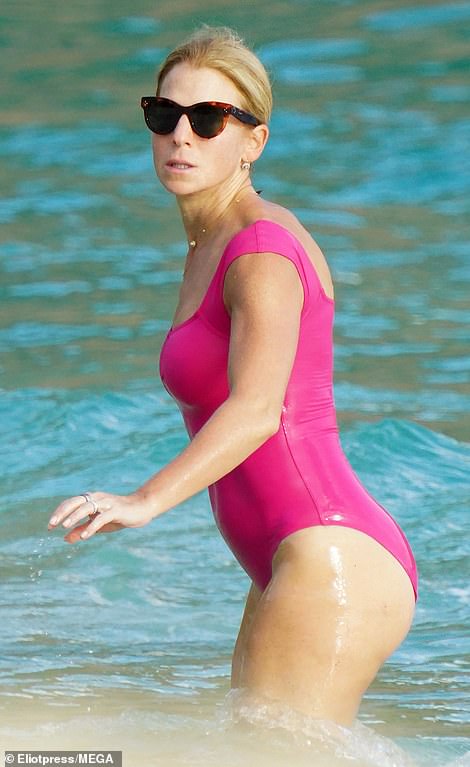 She kept her shades on for the quick dip in the ocean: Her sunglasses stayed in place. The shades were brown with a tortoise shell frame and a slight cat eye design 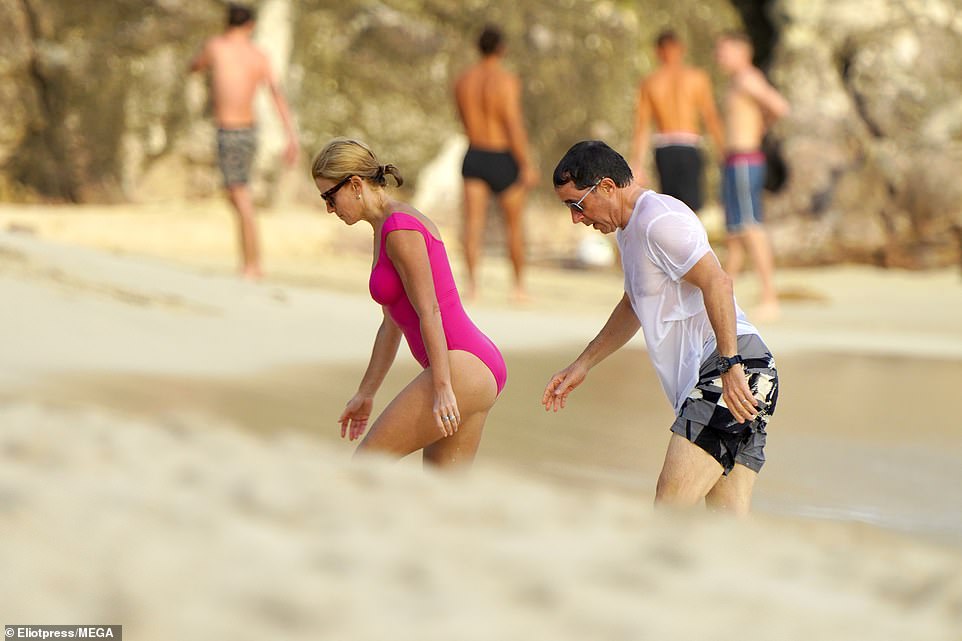 The trek back to their beach towels: Jessica led the way as they walked up to their little section of the vast beach

The Netflix film chronicles the invention of the Pop-Tart and is inspired by a joke the comedian once told on stage. Jerry will also be starring in the flick.

A synopsis for the project, which is set in Michigan in 1963, reads: ‘Kellogg’s and Post, sworn cereal rivals, race to create a pastry that will change the face of breakfast forever. A tale of ambition, betrayal, sugar and menacing milkmen.’

Jerry is directing from a script he has written with Spike Feresten, Andy Robin and Barry Marder.

Seinfeld and Feresten are producing the film with Cherylanne Martin, Andy Robin and Marder serving as executive producers. 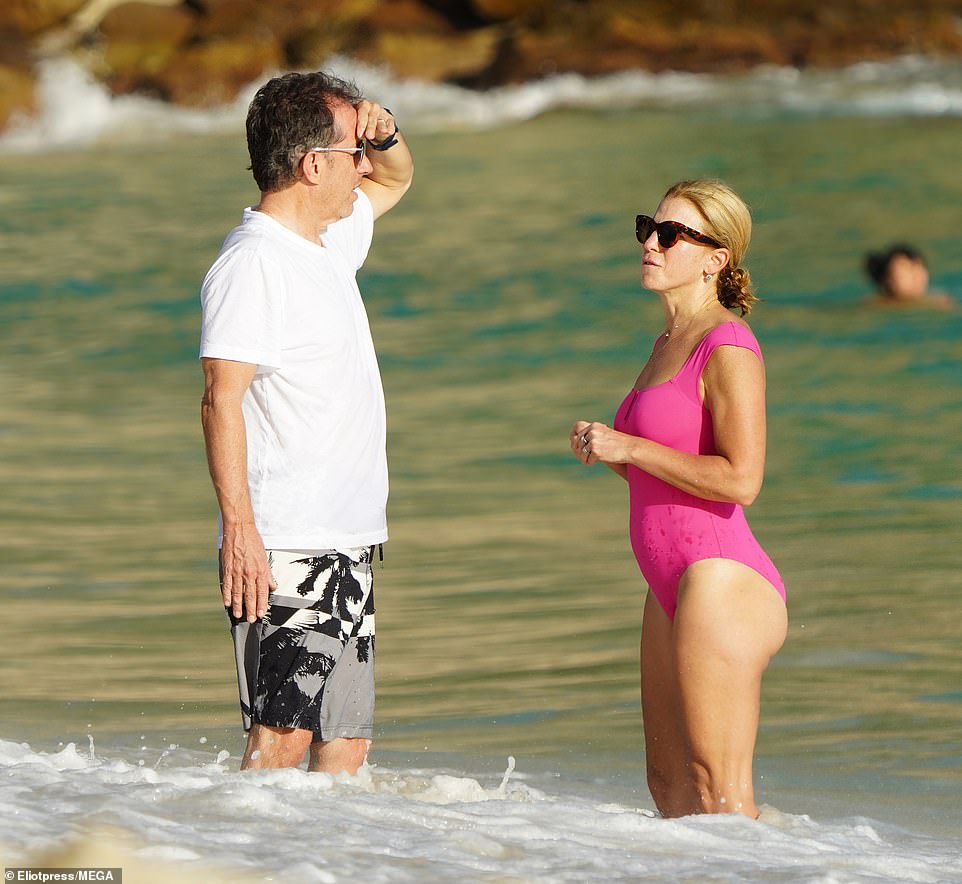 What could they be discussing? The man and wife seemed to have a deep talk as he shielded his eyes from the sun

Explaining the movie, the Seinfeld star said: ‘Stuck at home watching endless sad faces on TV, I thought this would be a good time to make something based on pure silliness.

‘So we took my Pop-Tart stand-up bit from my last Netflix special and exploded it into a giant, crazy comedy movie.’

Jerry previously explained how stand-up comedy has always been his top priority and he has never looked at it as a stepping stone to bigger things.

The star said: ‘There are not too many comedians that you see out there doing this as their first choice. They’re doing it as a stepping stone to get someplace else: movies, sitcoms, talk shows.

‘I’m doing this as my first choice. I wanted to be a comedian.’ 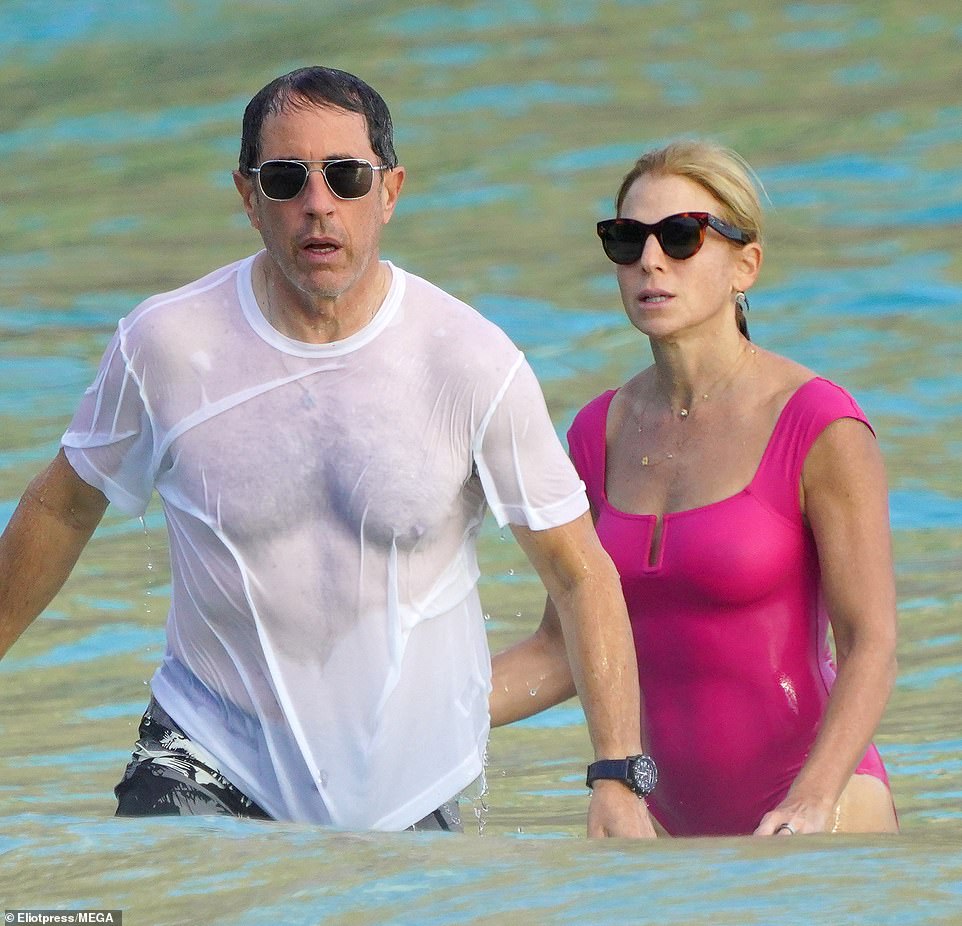 Wet and wild: He was wet from the ocean dip and she was wild in her hot pink suit that looked designer made 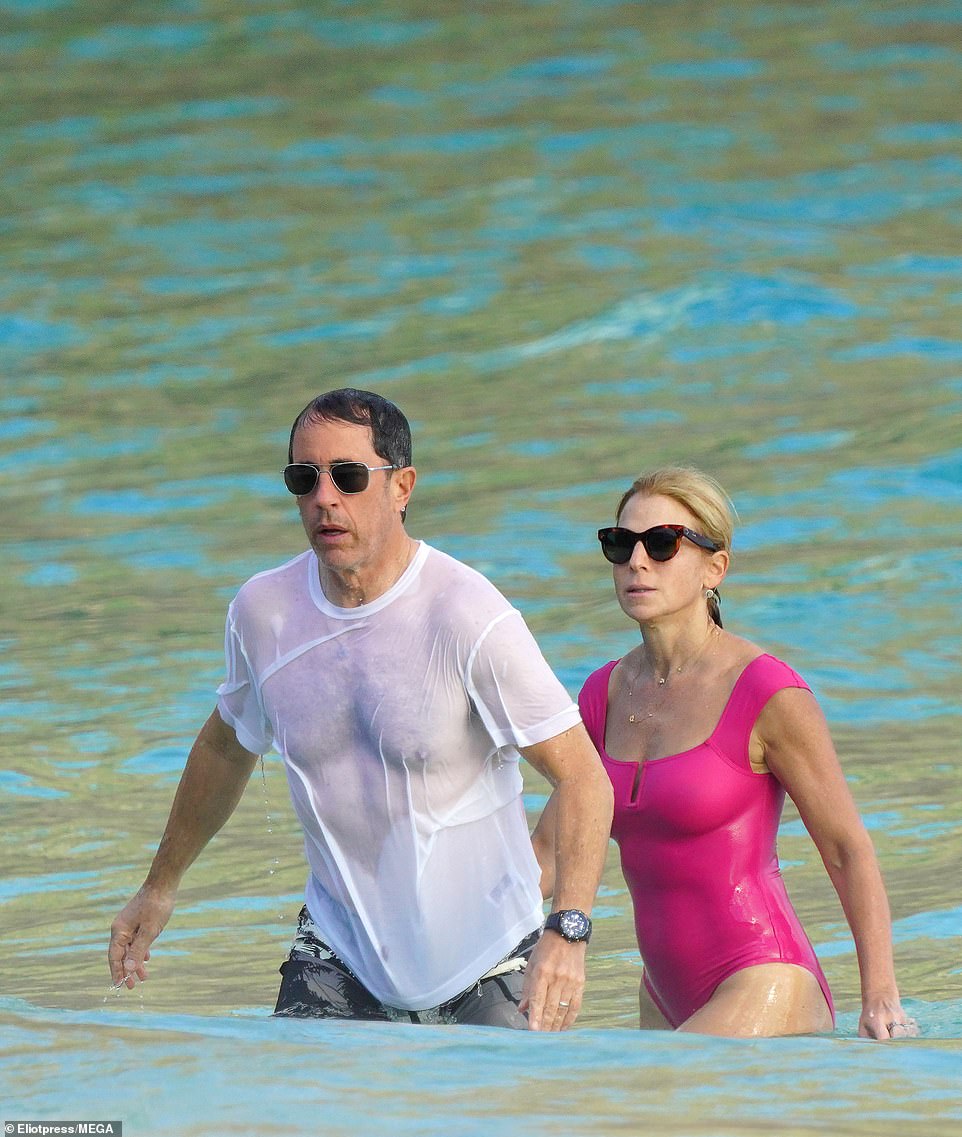 The look that says they need a cocktail: Neither appeared to be in an easy going mood as they walked out of the water

In April Jerry mourned the passing of a costar, Liz Sheridan.

The comedian starred as a semi-fictionalized version of himself in the classic sitcom Seinfeld and took to Twitter to mourn the loss of Sheridan, who played his overprotective mother Helen on the show after she died from natural causes at the age of 93.

He wrote: ‘Liz was always the sweetest, nicest TV mom a son could wish for. Every time she came on our show it was the coziest feeling for me. So lucky to have known her.’

Jason Alexander – who starred as Seinfeld’s best friend and sidekick George Costanza on the sitcom – also paid his respects upon hearing the news. 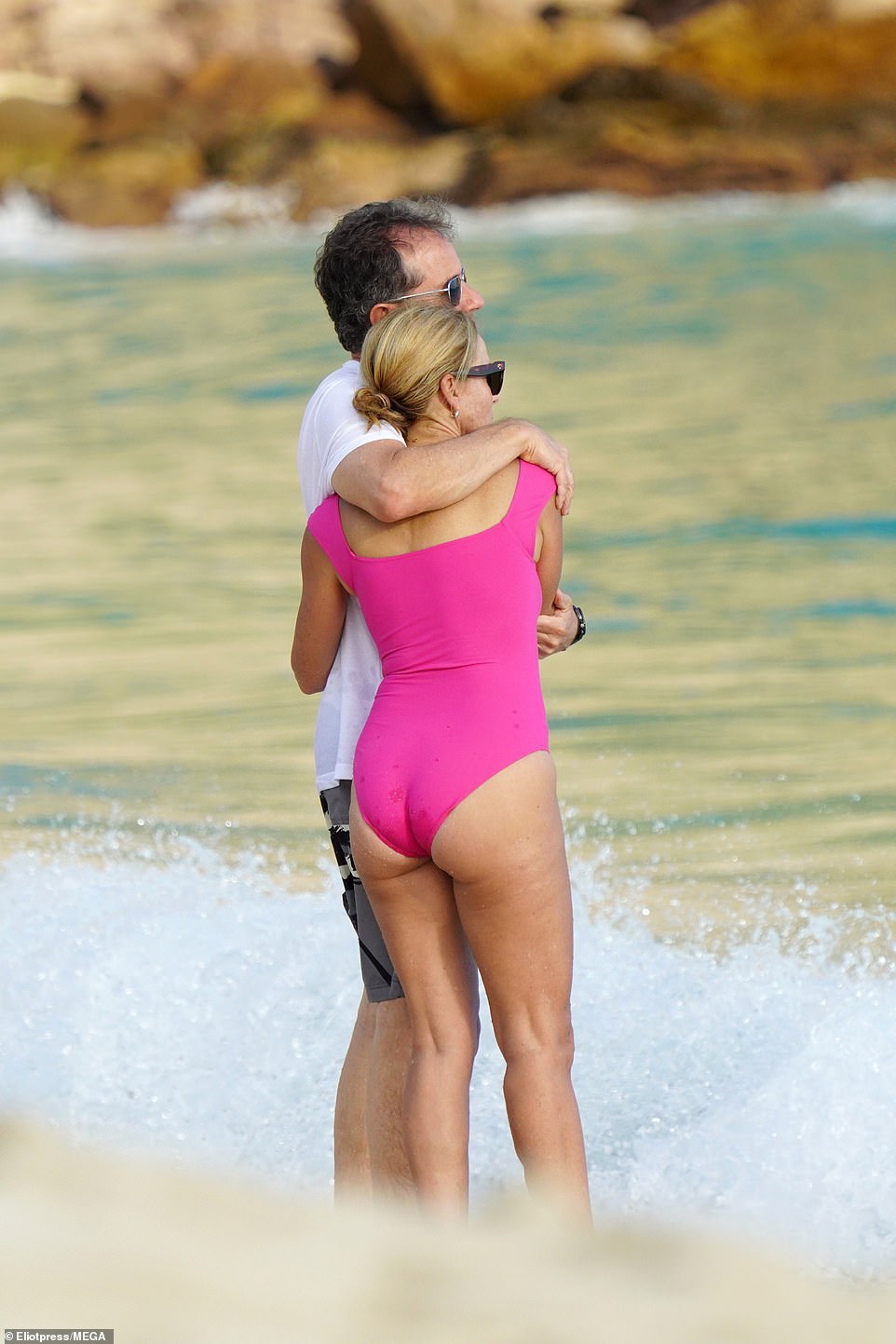 Will it last forever? The two seem ready to stay marriage for the long haul as they spend plenty of time together

He tweeted: ‘Oh my Lord, just learning of the passing of Liz Sheridan. She was as gracious and graceful a person and actress as you’ll ever meet. Fascinating life. Wonderful lady. Rest well.’

Liz – who was married to Dale Wales from 1985 until his death in 2003 and has daughter Stephanie with him- was also known for her role as nosy neighbour Mrs. Ochmonek, on sitcom ALF – passed away just five days after her 93rd birthday and died ‘peacefully in her sleep’, according to her publicist Amanda Hendon.