The newlyweds shared their special day with their closest friends and family, which was documented, in part, with some photos and videos that were shared on Instagram the following day.

The bride was decked out in a white gown that was adorned with little white bows along the neckline, that at times fell just off her shoulders. The ensemble also included a rainbow nature-inspired tiara for the reception. 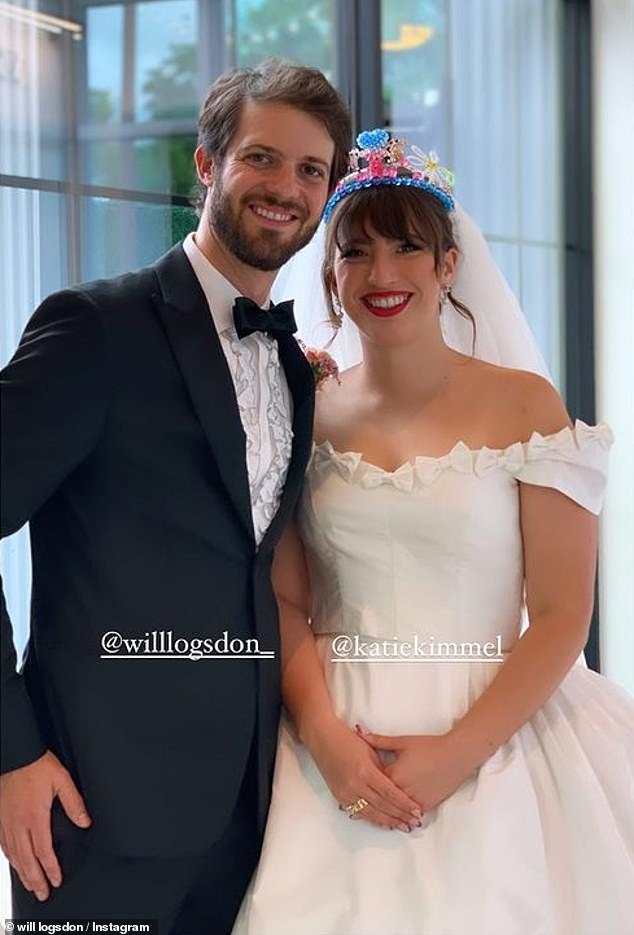 With his new bride dressed in traditional white, the groom opted to go with a traditional black tuxedo and matching bowtie, along with a white tuxedo shirt.

And with Katie being a ceramic artist, the wedding party was decorated with an array of handmaid ceramic pieces, to go along with the colorful flowers that helped dress up each of the tables.

The couple were captured at their table, surrounded by the gorgeous bouquet of flowers, in one photo posted by Laura Chautin, an artist, designer, and illustrator.

And in one of the more touching moments, Jimmy was obviously beaming with pride when he did the traditional father-daughter dance during the wedding party. 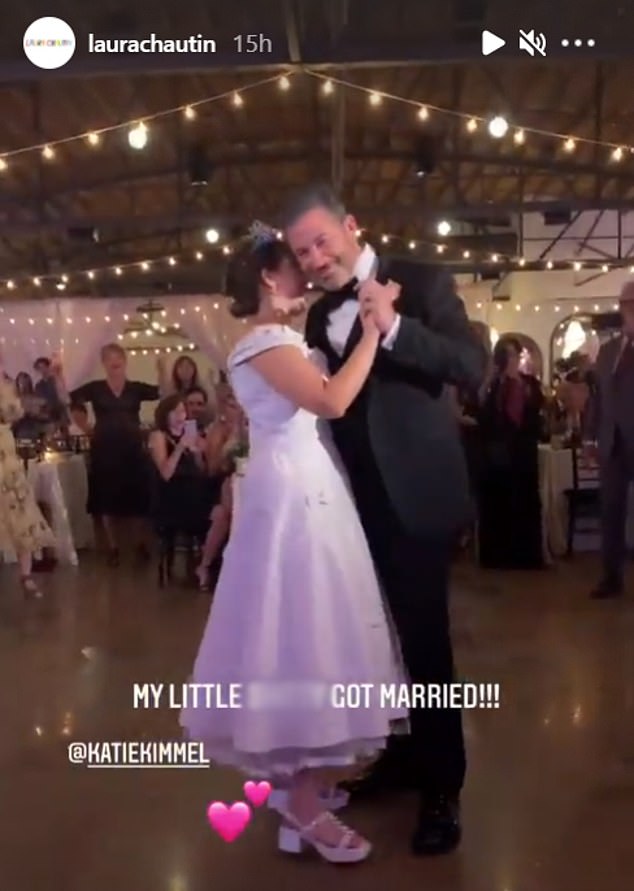 Glowing with pride: Jimmy Kimmel, 53, was beaming with pride when he did the traditional father-daughter dance at the wedding party 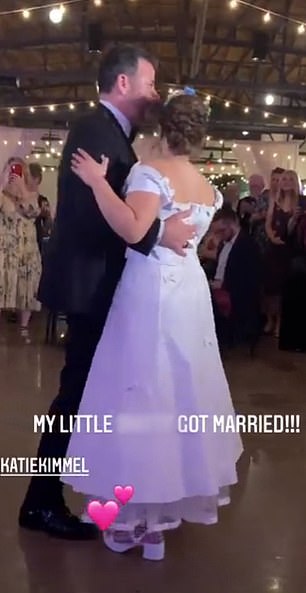 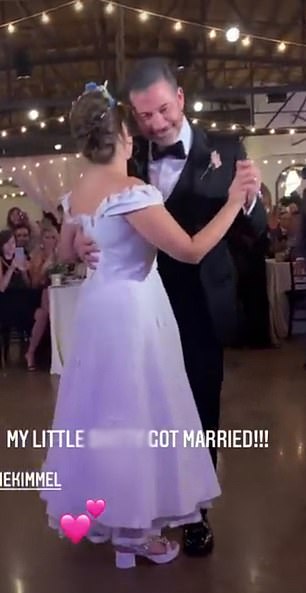 Handsome: The late night host looked handsome in an all black tuxedo-bowtie ensemble 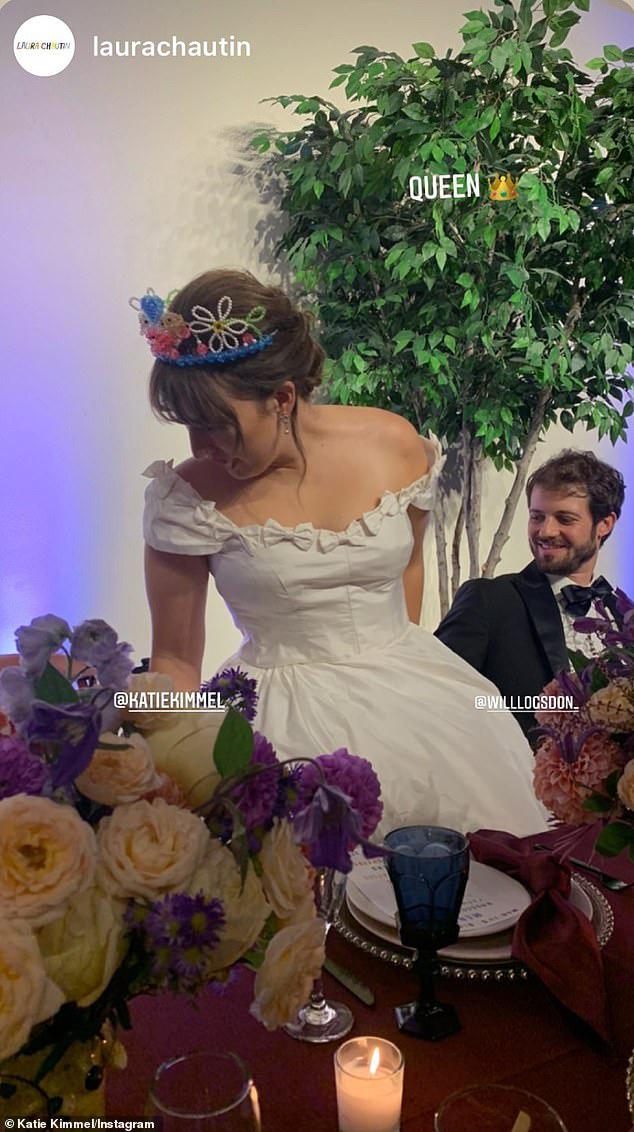 Colorful: With Katie being a ceramic artist, the wedding party was decorated with an array of handmaid ceramic pieces, to go along with the colorful flowers that helped dress up the tables 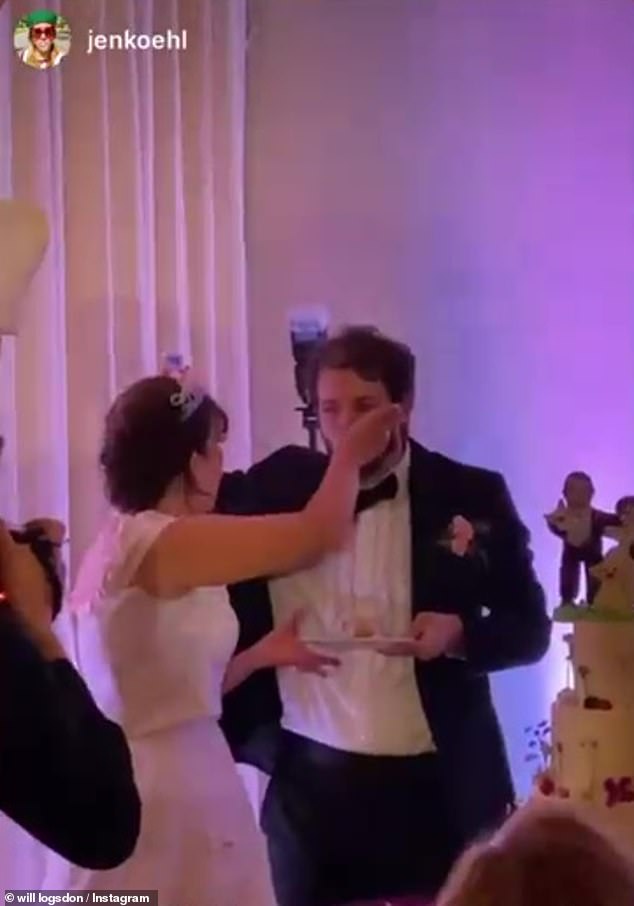 Tasty moment: The newlyweds also fed each other a bite or two of the wedding cake 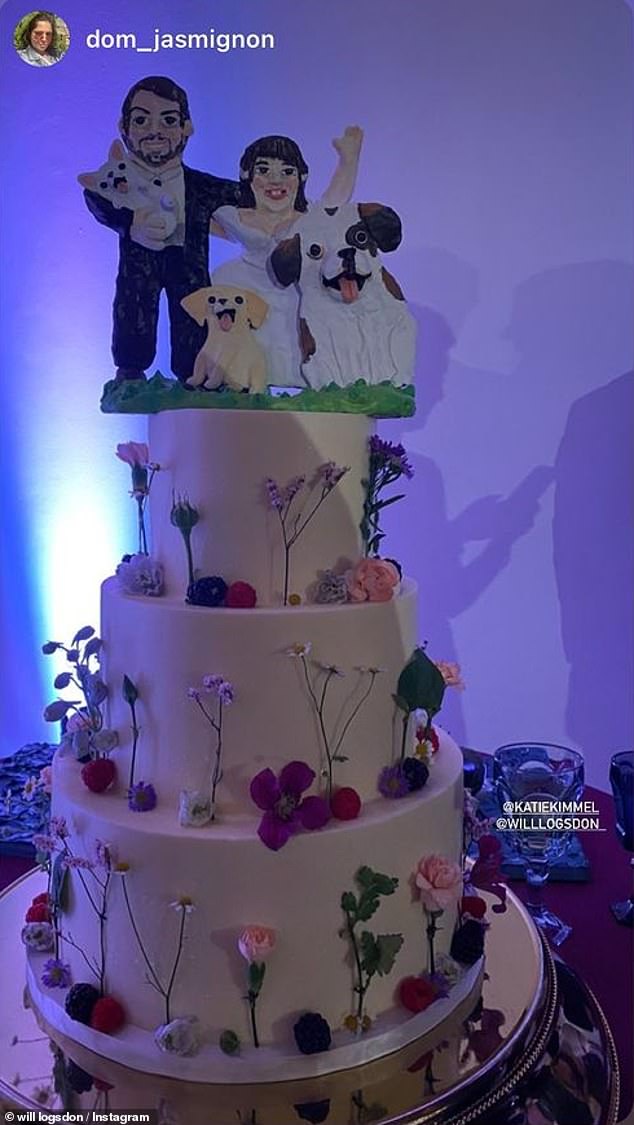 Family: The cake was adorned with ceramic versions of the couple, as well as their three dogs

The longtime late night host looked handsome in his all black tuxedo-bowtie ensemble that had an added touch of class with a boutonniere attached to his left lapel.

Just a few weeks ago, the late night host took to Instagram and wished Katie a happy 30th birthday by sharing a throwback snap that captured an adorable daddy-daughter moment when she was a toddler.

‘Happy 30th birthday to this talented and delightful baby @katiekimmel (who no longer fits on my head),’ he wrote in the caption of a photo showing Katie on her father’s shoulders.

‘I am so proud of what a great person you‘ve become. Thanks for making me a Dad, Little Head.’ 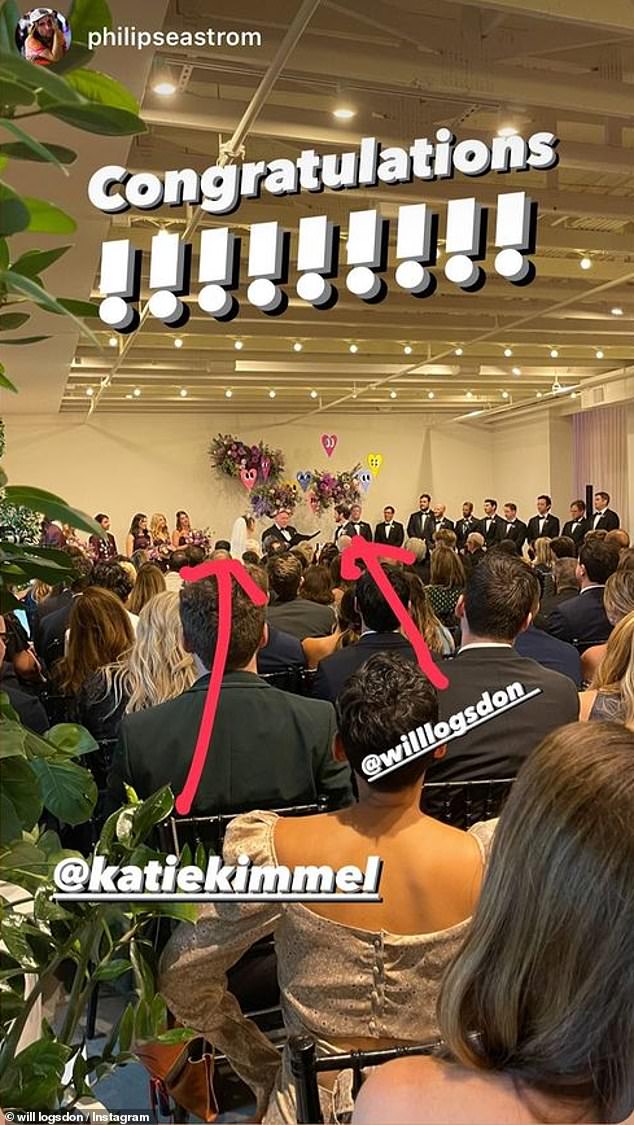 Documented: Many of the guests shared photos and video clips of the wedding and party 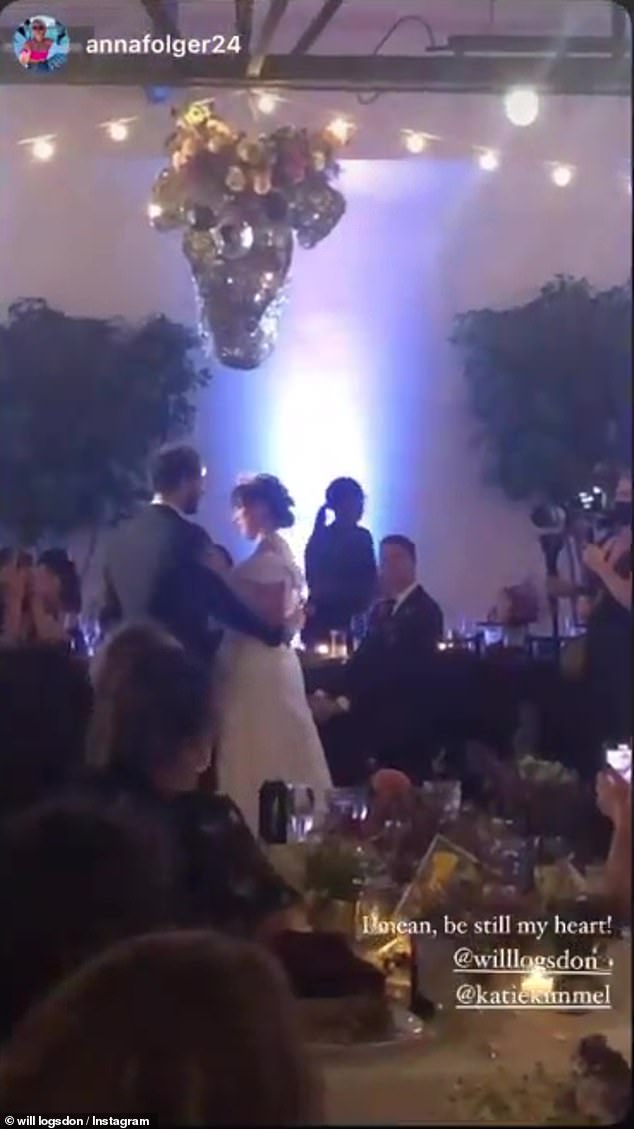 Lovely moment: The festivities also included the newlyweds dancing together 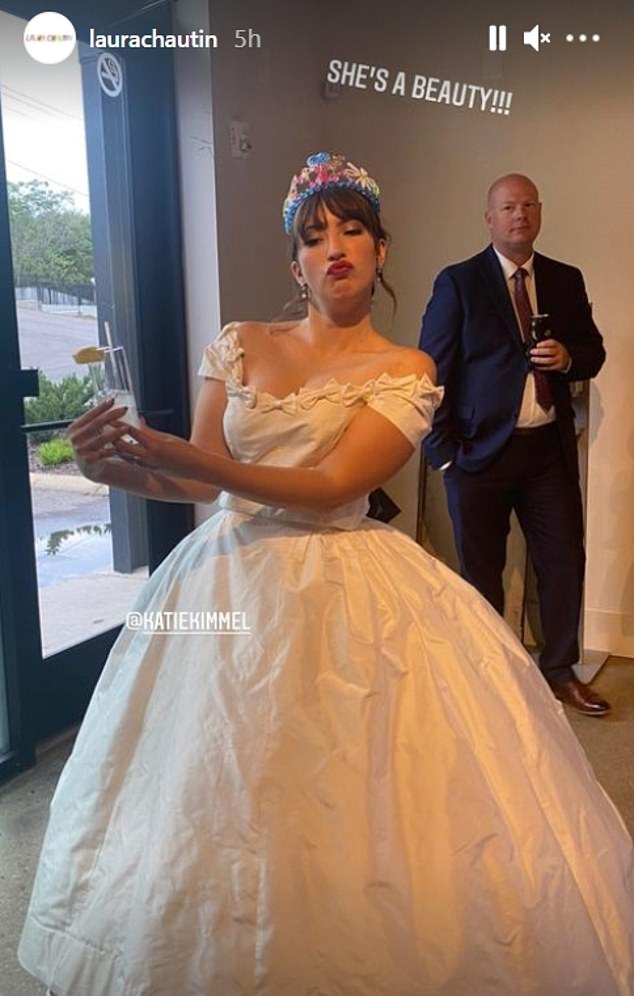 The apple does’t fall too far: At times, Katie showed off her comedic side

Katie, 30, is the comedian’s oldest child that he shares with ex-wife Gina Kimmel.

Their marriage, which ended in divorce in 2002, also resulted in the arrival of their 27-year-old son Kevin.

After remarrying in 2013, Jimmy and wife Molly McNearney have since become the proud parents to daughter Jane, seven, and son Billy, four. 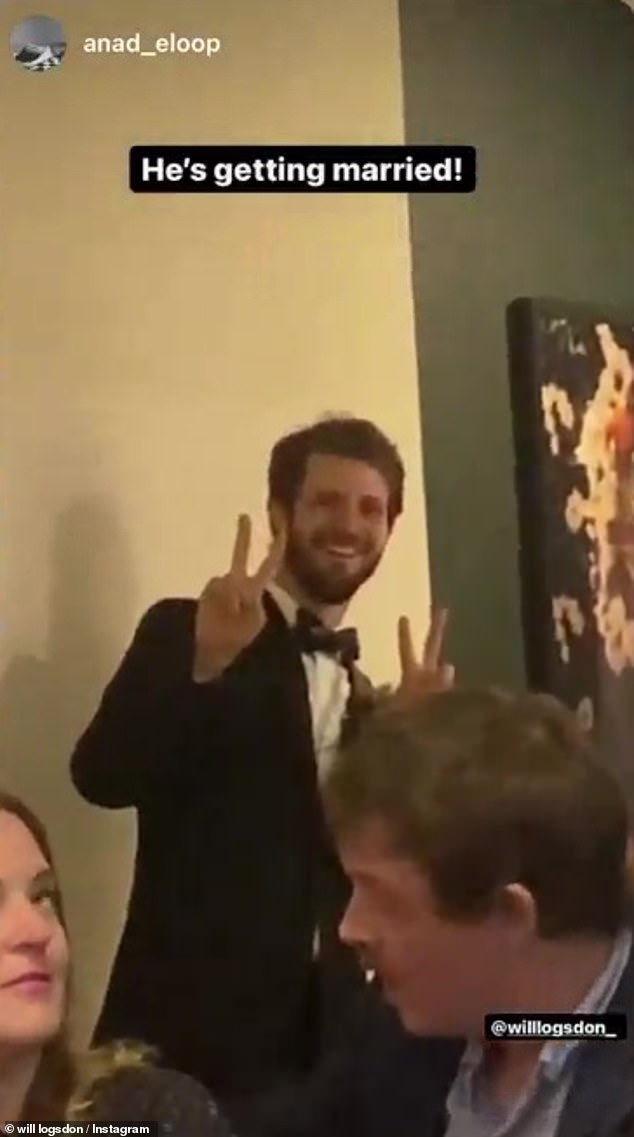 Beaming: The groom flashed a peace sign to a friend during the wedding party 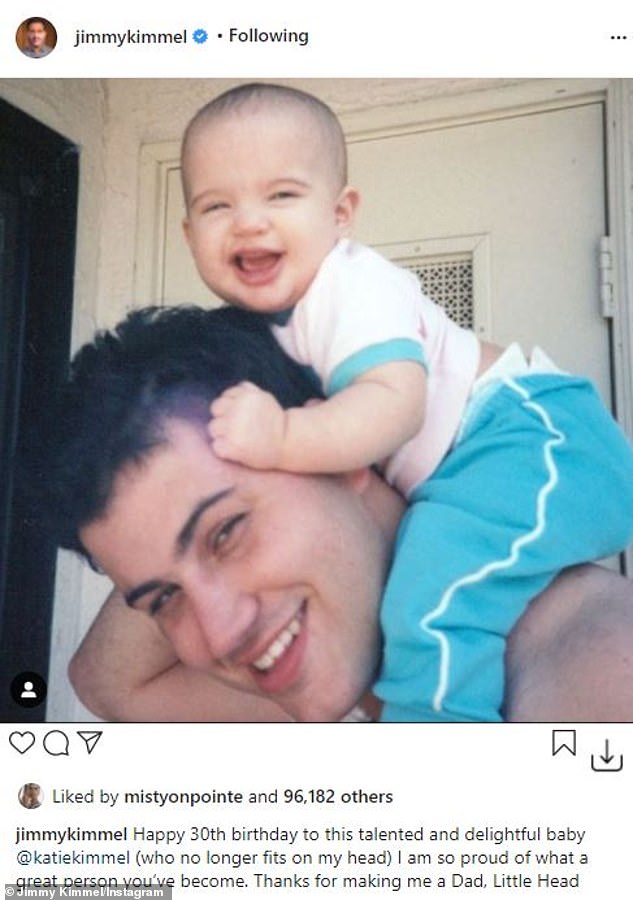 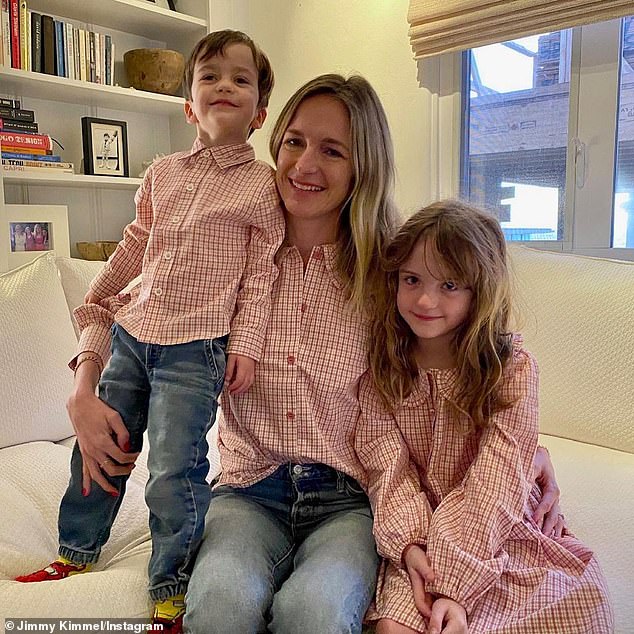