EXCLUSIVE ‘Right now, I would say never ever again’: Kate Ferdinand rules out having another baby after the traumatic birth of her son – and jokes motherhood has aged her by a decade

Kate Ferdinand has ruled out having any more children following the traumatic birth of her newborn baby – and joked motherhood has aged her by a decade.

Speaking to MailOnline in her first interview since welcoming son Cree before Christmas, the former reality star, 29, says the thought of expanding her family makes her feel ‘anxious’ as she recovers from life-saving surgery.

Kate, who is stepmother to husband Rio’s three children from his marriage to late wife Rebecca, wants to give fellow mums a ‘real’ perspective of post-baby life, saying she would be ‘lying’ if she was only uploading glamorous pictures. 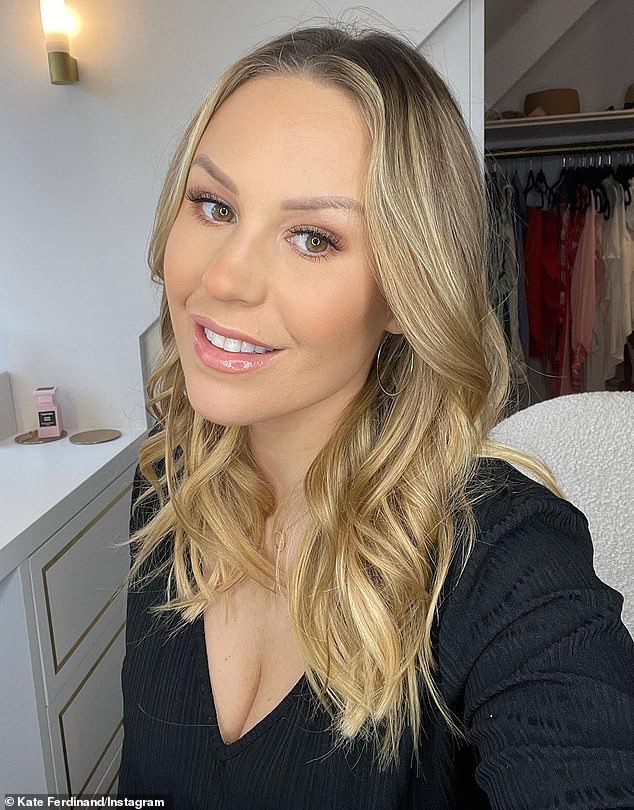 :I’m only 29 but I feel 39!’: Kate Ferdinand has ruled out having any more children following the traumatic birth of her newborn baby and joked motherhood has aged her by a decade

On the prospect of having more children, Kate said: ‘If you ask me right now I would say never ever again. Our house is very hectic as it is.

‘We have four kids and two dogs, it’s a madhouse. The thought of having another one makes me slightly anxious.

Since announcing the arrival of Cree last month, Kate has kept a low profile while she recovers from her C-section at home. 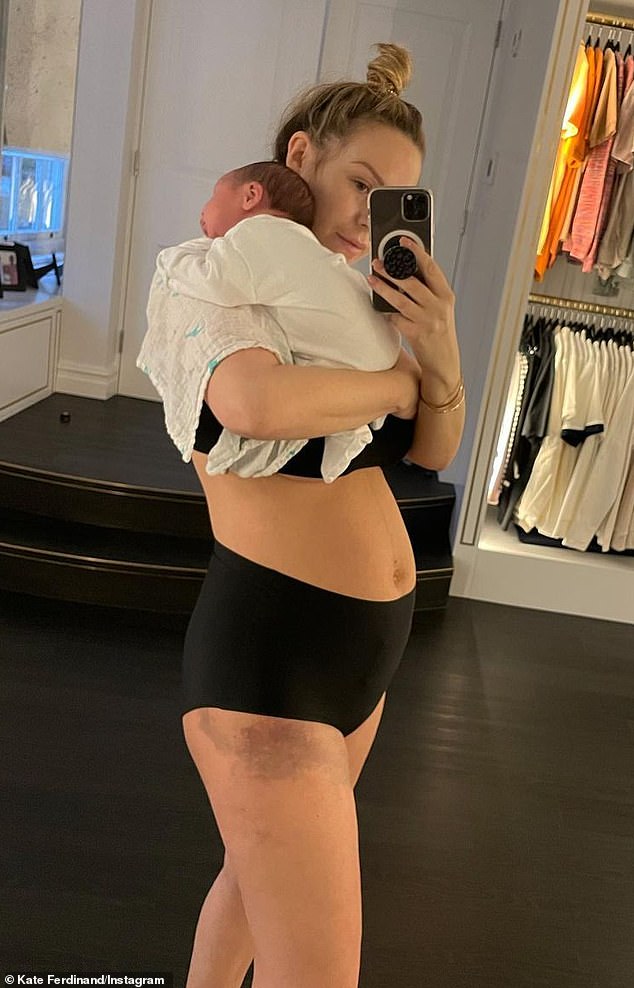 ‘Our house is very hectic as it is’: Speaking to MailOnline in her first interview since welcoming Cree, the former reality star says the thought of expanding her family makes her feel ‘anxious’

But in recent weeks she has posted health updates on her Instagram page, documenting the plus points of caring for a newborn and the negatives.

Kate, who was speaking to MailOnline via her partnership with WaterWipes, revealed she was struggling to cope with the combination of sleep deprivation, lack of exercise and homeschooling her stepchildren.

She also posted a picture of her post-baby body to show other mums the realities of childbirth, which isn’t often documented on social media.

Kate explained: ‘I felt like I was scrolling on Instagram and everybody was looking so amazing after having a baby. 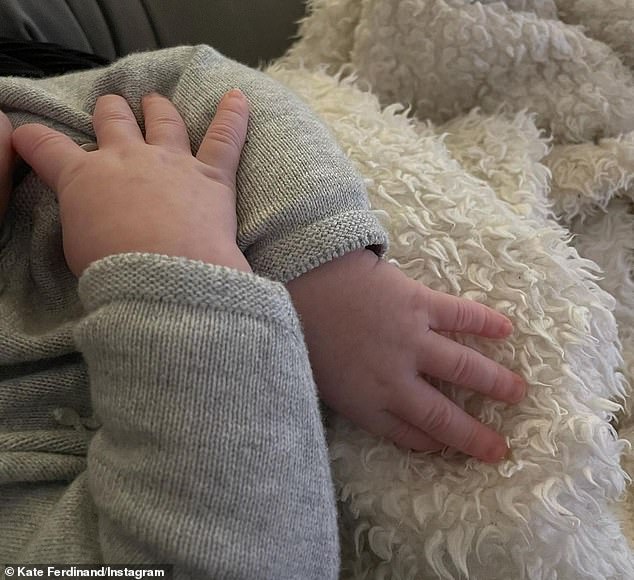 ‘It’s just not real’: Kate, who is stepmother to husband Rio’s three children from his marriage to late wife Rebecca, wants to give fellow mums a ‘real’ perspective of post-baby life

‘They were in these tight little trousers and I was looking at myself thinking ‘I don’t look like this.’

‘I felt like I would just be lying if I didn’t tell the truth. I didn’t just want to upload a picture of myself looking great, because it’s just not real.

‘I’ve felt some sort of release from doing it. I was a bit nervous before and sometimes social media can be a real negative but it’s been positive for me since I posted my experiences.

‘I think there’s so many mums going through similar things.’

Six weeks on from the birth, Kate feels she’s now in a much better place.

The former TOWIE star has been able to go to the gym for the first time and is already feeling the benefits of endorphins ‘flowing through my body.’ 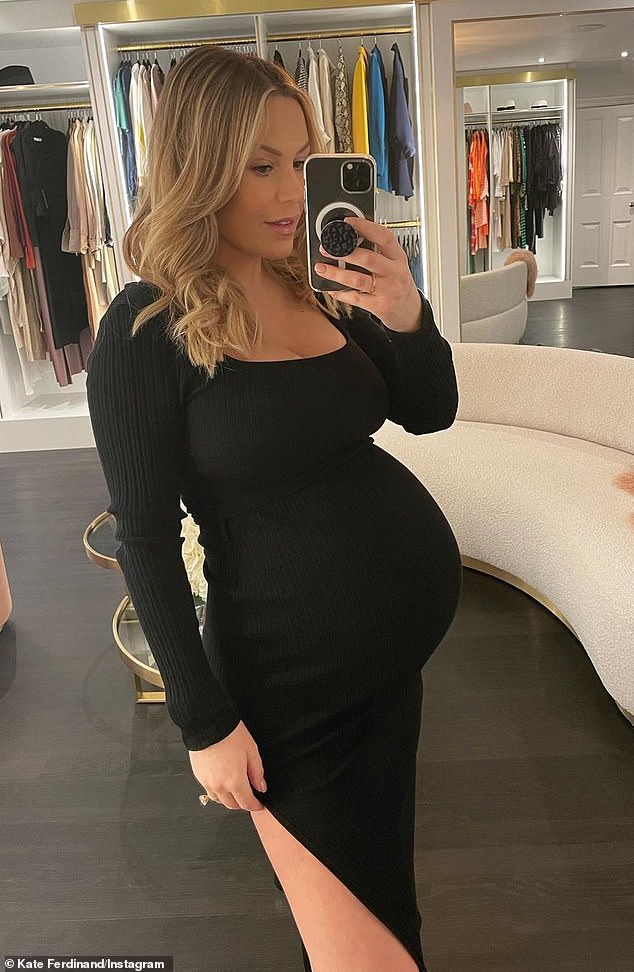 ‘There’s so many mums going through similar things’: Kate revealed she was struggling with the combination of sleep deprivation, lack of exercise and homeschooling her stepchildren 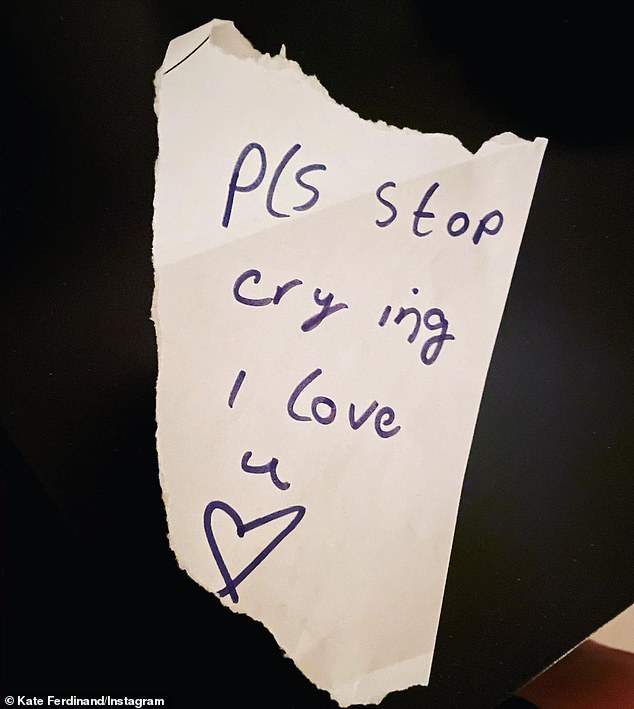 Heartfelt: Earlier this month, Kate shared a handwritten note from stepdaughter Tia, which said: ‘Please stop crying, I love you’ as she admitted to being emotional since Cree’s arrival

She admits lockdown has been a blessing in some ways as she’s been allowed to recover in her own time without ‘everyone knocking at the door’, but she does miss social interaction and taking Cree out to different places – and change his nappy outside of her house.

‘I realised I haven’t left the house yet with the baby and changed him out,’ she says.

‘So it’s a thing I’m anxious for because it’s so abnormal not to go out with your baby and change them and I haven’t done that and I don’t know when I will.

‘It’s like this big event whereas normally you’re out and about, you go round your friends house and I haven’t really done anything. I’m a bit nervous for when I actually do.’

Her children Lorenz, 14, Tate, 12, and Tia, nine, have helped her recovery immensely, cooking dinners and allowing her to bond with baby Cree.

Rio, 42, has also been very hands-on, other than changing nappies. 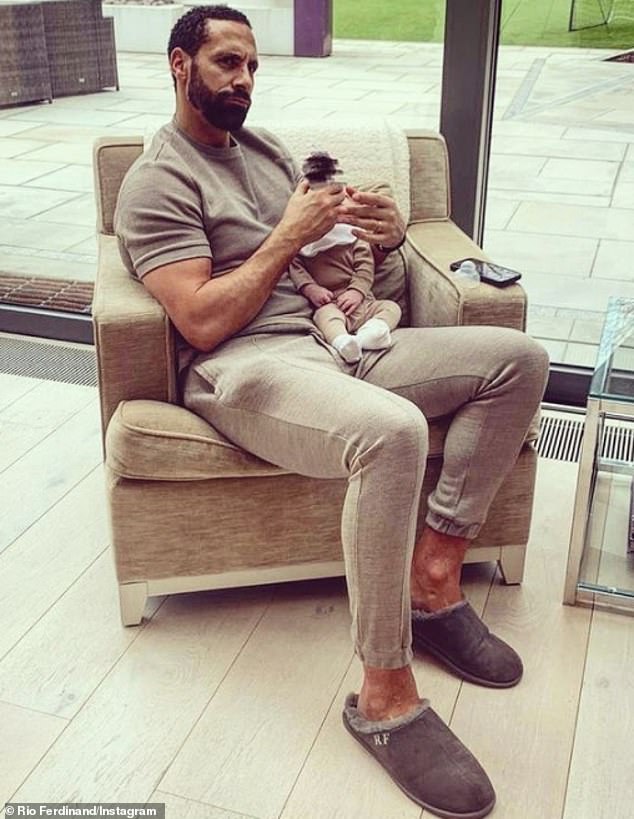 ‘I can’t fault them’: Kate explained Rio and the children have been very hands-on, even changing nappies, though the ex-England captain has managed to escape the ‘pooey’ ones

She explained: ‘Rio’s been really good. Because I had the emergency C-section it was really unexpected and Rio and the kids have helped me so much, so I can’t fault them in any way.

‘Although he does seem to have escaped the pooey nappies, I’m not sure how he’s managed that, to time it so right that they always happen with me.’

Kate admits the prospect of nappy changing weighed on her mind before Cree was born.

‘I was really worried about that as I have three grown up kids, I’m a step-mum, so I feel like a mum already but haven’t been through that baby stage so I was really nervous. But once you’ve changed one, it’s really easy isn’t it?’ 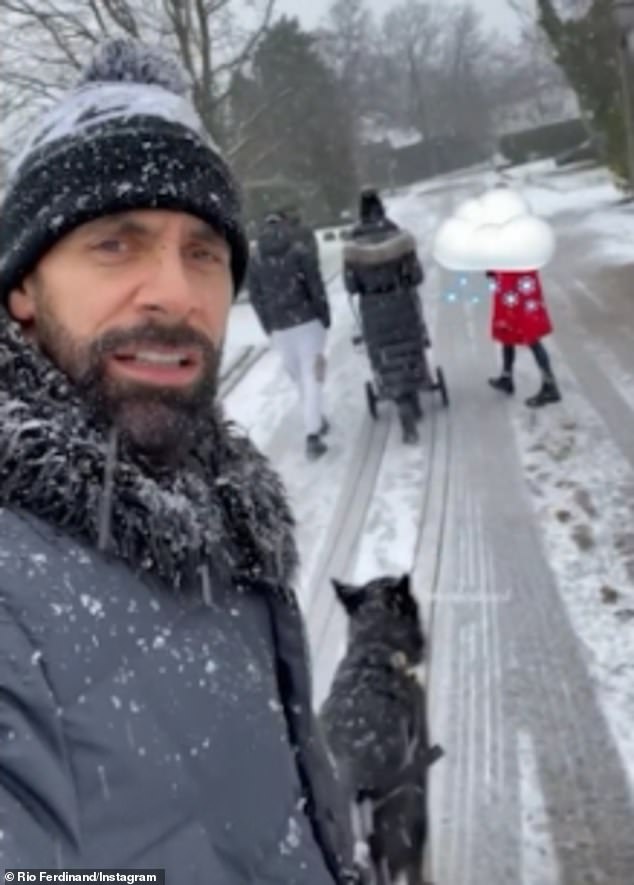 ‘I was really worried’: Kate admits the prospect of nappy changing weighed on her mind before Cree was born because she only had the experience of looking after grown-up children

Rio was able to be by Kate’s side when she gave birth in December, despite her concerns Covid restrictions may hamper his ability to support her.

And it’s fair to say the ex-England captain offered some unique support.

She said: ‘Rio was with me the whole time so that was good.

‘At one stage I thought he wasn’t going to be there, I was really worried about that, I’ve seen things on social media about these poor women who haven’t been able to have their partner there but they did change the rules in time for me so I was just grateful he could be there with me.’

And according to Kate, the former Manchester United defender used time in hospital to prank her. 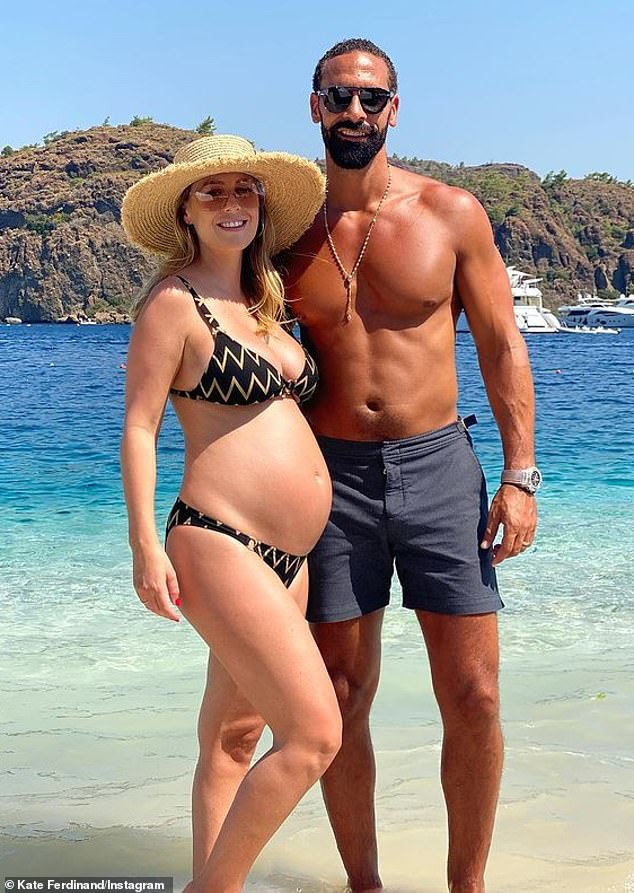 ‘He was making me laugh so much’: Rio was able to be by Kate’s side when she gave birth despite Covid restrictions and he even found ways to make her laugh during the labour

She explained: ‘Everyone thought I’d be crazy in labour but I was very calm and collective and he was hilarious.

‘He was making me laugh so much but after we had the baby I found hundreds of selfies on my phone or him taking hilarious selfies with his Chinese with me in the background asleep, or spraying water all over me, he really wanted to document it.

‘Thankfully he wasn’t wasn’t doing it during the operation. He got a bit worried then, that’s when the selfies stopped.

‘It’s funny to look back on, he was having a good time. If I knew he was doing all the selfies at the time I would have killed him. It’s quite funny looking back at him now.’

Choosing what products were best for her baby has left Kate feeling slightly overwhelmed.

Which is why she became an ambassador of WaterWipes to help other new mums avoid confusion while also remaining eco-friendly.

‘You have so many worries as a new mum and this just takes away one worry.’