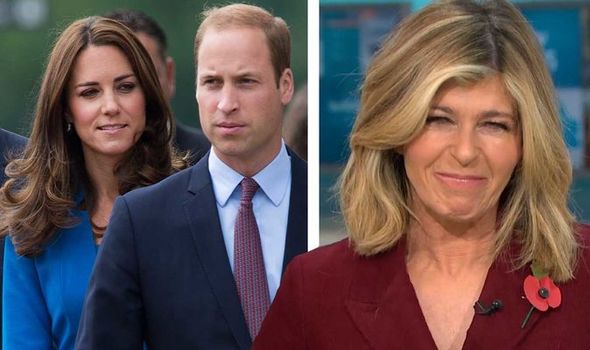 Kate Garraway, 53, has been at the forefront of many people’s minds after her husband Derek Draper, 53, fell seriously ill from contracting coronavirus in March. He has since become the longest survivor of the dreaded illness in the UK, and is still in hospital battling various devastating effects it’s had on his body. Her story has become the talk of the nation, and among those who have sent their love and well wishes to the family are Prince William and Kate, who revealed they want to give her a hug after hearing of her family’s nightmare.

The Duke and Duchess of Cambridge explained they were moved by the Good Morning Britain host’s resilience and strength, able to put on a brave face for her children Darcey, 14 and Billy, 11, while Derek is still suffering “big ups and downs” on the slow road to recovery.

Kate returned to the GMB panel two months ago after a break away to focus on her family while he was at his worst.

She has been applauded by many who have also gone through the same or similar experiences throughout this terrible and uncertain time.

Kate met the royal couple during a visit to St Bartholomews hospital in London to present a Mirror Pride of Britain award to the NHS frontline heroes, who have served the country throughout the height of the pandemic.

As they met the TV presenter, who was there to introduce them to NHS representatives, the Duchess of Cambridge reportedly told her: “I think you’re amazing to do this as I know you’ve had such a hard time yourself.”

Having listened intently to Kate’s turmoil, William added: “You are doing amazingly though.

“If it wasn’t for social distancing we would both give you a hug.”

Kate replied to the Royal’s sweet sentiments: “I think we are all doing OK but it’s very difficult because you can’t visit that often and the children haven’t got to visit Derek,” she said, referring to the strict hospital rules that only allow one visitor for each patient.

“And I think that’s a huge pressure for everyone – mental and physical health.”

They also touched on the similar timings of when Derek and Prince Charles contracted the disease, both coming down with it in March.

As she thanked the Royals for sparing the time to join her and celebrate the NHS medics, the Duke said: “We’re always keen to help, especially this year with everything going on.

“It’s been difficult for a lot of people.”

Kate is set to appear in an emotional ITV documentary where she will speak to a wide variety of people who have been impacted differently by coronavirus across the country.

The program is also expected to show Kate speaking about Derek and his on-going recovery.

The Daily Record reported that a source close to Kate said: “Kate has been seen on GMB regularly talking about Derek and his on-going battle against coronavirus and now she has decided to use her viewpoint to make a documentary too where she speak to lots of others who have been affected and the stories behind the headlines and the people involved.

“As well as looking at what she had gone through the programme will also speak to survivors of the disease, people on the frontline and economic experts who will give insight about the impact of coronavirus.

They continued: “The idea is to look at the virus and its impact in a number of different ways to show how it has affected so many people around the country.

“Based on watching Kate discuss Derek’s illness on screen, it is likely to make emotional viewing when it airs early next year.”

The Daily Mirror’s Pride of Britain Awards will be screened on Sunday at 9pm on ITV.