There are a lot of very valid ways to describe Kate Middleton’s look at the No Time to Die premiere in London last month. Bond Girl chic. Maximum goddess vibes. Dammnnnnn. *That thing where cartoon characters’ eyes become hearts and explode out of their heads.*

If you took one look at Kate’s look for the latest Bond movie premiere and had immediate flashbacks to the People’s Princess, that’s not just understandable, it’s by design.

A royal source explained to Us Weekly that her late mother-in-law was high on Kate’s inspo list when it came to her No Time to Die ensemble.

“Kate had her own Bond girl moment at the No Time to Die premiere,” the source, described as “close to the duchess” told Us Weekly. “She oozed confidence and old school Hollywood glamor.”

It’s hard to avoid oozing old school Hollywood glamour when you look like, well, this: 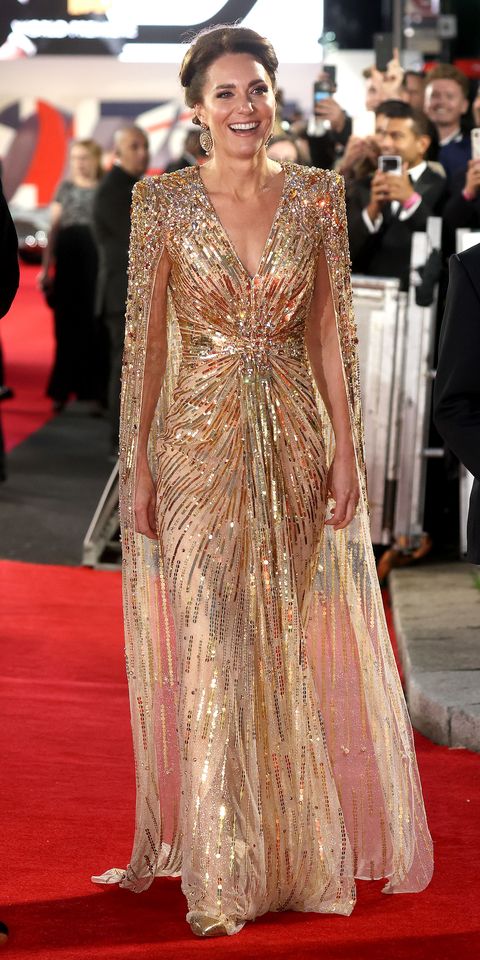 And it’s hard not to ooze confidence when you’re dressed to pay homage to your icon, which Kate most definitely was. According to the Us source, Kate had Diana’s look at her own Bond premiere moment (1985’s View to a Kill) in mind when she dressed for the star-studded event.

“Kate admired Diana’s taste in fashion before William came into her life,” the source added. “During her school days she’d tell friends that Diana was her style icon. It would be wrong to say that Kate is trying top Diana as the royal family’s best dressed. A more accurate description is that she is taking inspiration from the late Princess and wanted to pay homage to on the night of the No Time to Die premiere by channeling the dress Diana wore at the View To A Kill premiere.”

Instead of going for an outright copycat look, Kate made the look her own while still clearly paying homage to Diana’s dress from the View To A Kill premiere. Both dresses feature stunning metallic fabric, deep, plunging v-necklines, structured shoulders, and sunburst ruching pattern in the bodice, just to name a few. 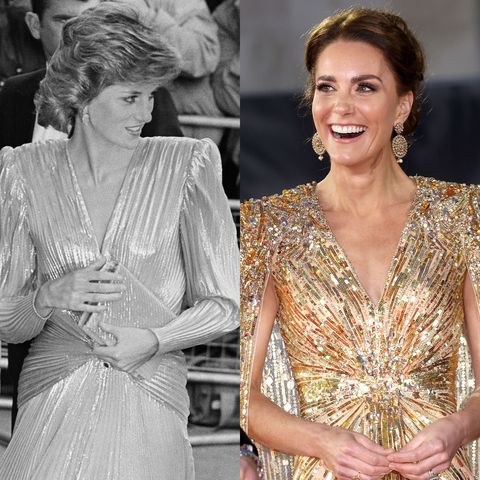 Can we go ahead and submit these photos to Merriam-Webster in case they’re looking for an illustration to accompany any definition for “timeless style” in the future?