Kendall Jenner was the perfect poster girl for her 818 tequila brand on Tuesday.

The model shared a series of sizzling Instagram photos as she topped up her tan in a tiny brown bikini.

Kendall, 26, flaunted her jaw-dropping physique in her skimpy swimwear as she lounged with her beloved pet pooch. 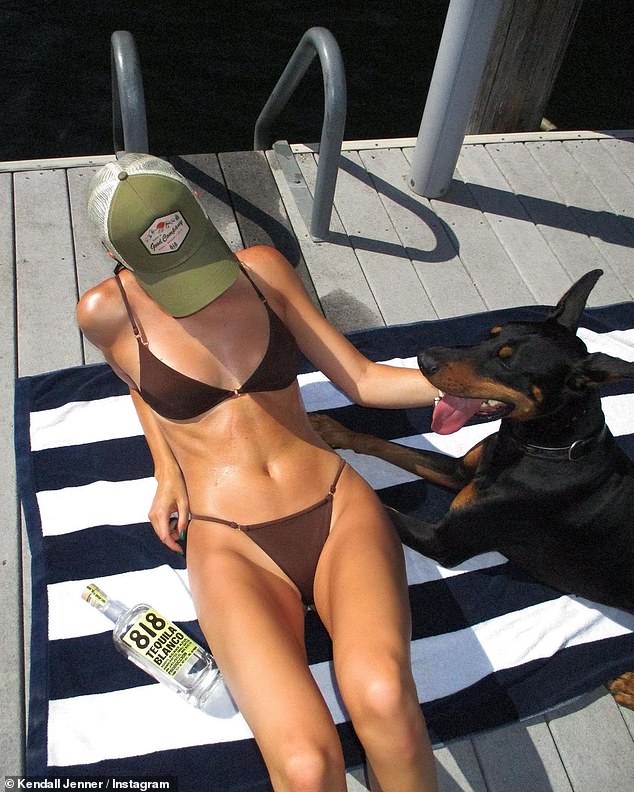 Sizzling: Kendall Jenner was the perfect poster girl for her 818 tequila brand on Tuesday, sharing a series of sizzling Instagram photos as she topped up her tan in a tiny brown bikini

Kendall’s glowing tan was on show as she continues to enjoy her summer of fun.

The star relaxed on a stiped towel with a 818 baseball cap covering her face, giving all the attention to her bikini-clad figure.

She petted her beloved Doberman Pinscher, who was laid down next to her. While the model often shares pics with her pup on Instagram, she’s never revealed a name for the animal.

A bottle of her 818 tequila was by her side, with Kendall tagging the popular brand in her caption. 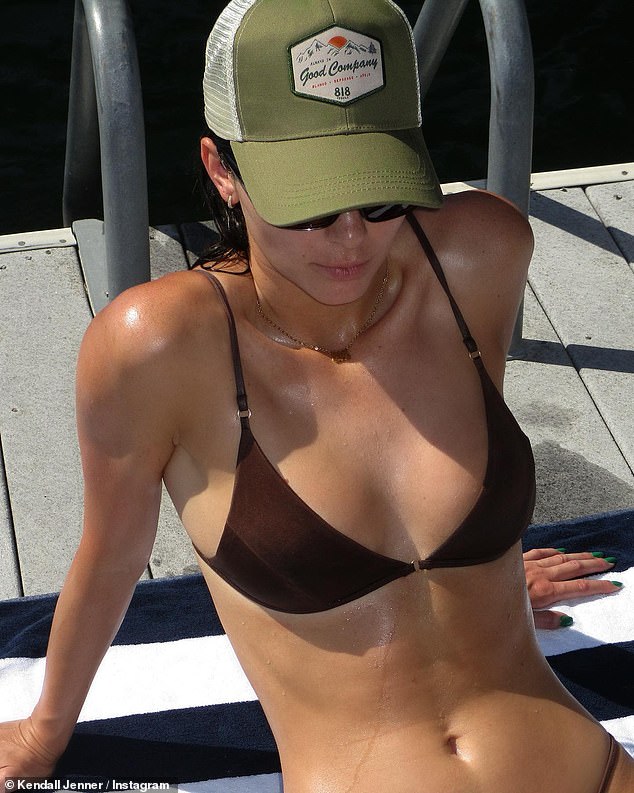 Showing off her tan: Kendall, 26, flaunted her jaw-dropping physique in her skimpy swimwear after a dip in her pool

Back in January 818 was officially named the number one new spirit brand introduced in 2021.

In the first seven months of its launch, 818 shipped over 1.5M bottles of tequila.

Jenner is just one of the celebrities who have entered the hot tequila market. Others are George Clooney and Rande Gerber with Casamigos, The Rock with Teremana and Mark Wahlberg with Flecha Azul.

Last year she told Forbes: ‘I was intrigued by tequila because my parents really loved it. It was celebratory in our household. When I got older, I started exploring the space… And I was always trying wide varieties of tequila.’ 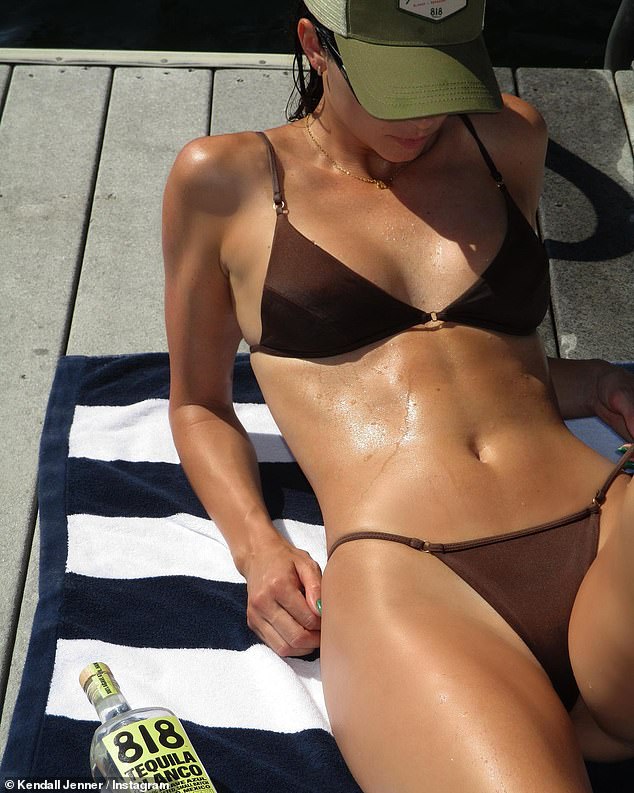 Poster girl: A bottle of her 818 tequila was by her side, with Kendall tagging the popular brand in her caption

And she added: ‘Coming from such a female dominated family, all of my sisters have their businesses. I’ve been really inspired by that my entire life.

‘I was always watching my sisters do their thing and have their partnerships and businesses… so it’s always been very highly female-driven, and entrepreneurial, in my family. That’s been really inspiring for me.’

The 25-year-old model has previously faced backlash amid claims of cultural appropriation. 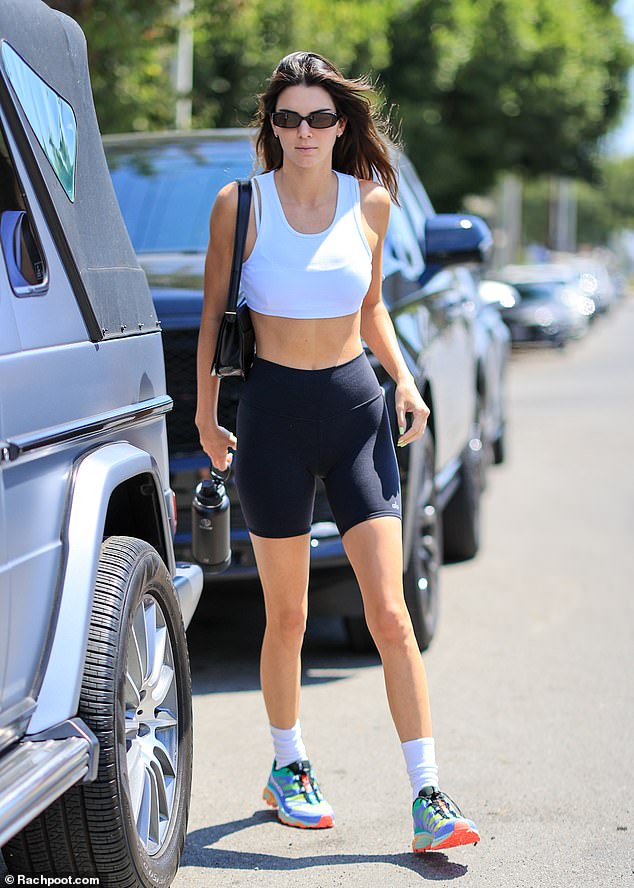 Alo there! Earlier on Tuesday Kendall showed off her model physique in ALO shorts while shopping on Melrose Avenue

She disputed the narrative on The Tonight Show Starring Jimmy Fallon where she stated that she was actually giving back to the people in the area where 818 is made.

‘At our distillery, which I was just at the other day, we found a way to take the agave waste, the agave fibres and the water waste, and build this sustainable brick that we are actually donating back to the community of Jalisco,’ the Vogue model shared.

And the daughter of Kris Jenner added: ‘Along with saving the planet it’s important for us to be friendly to the community as well. We’re donating them and building homes for people that need homes.’ 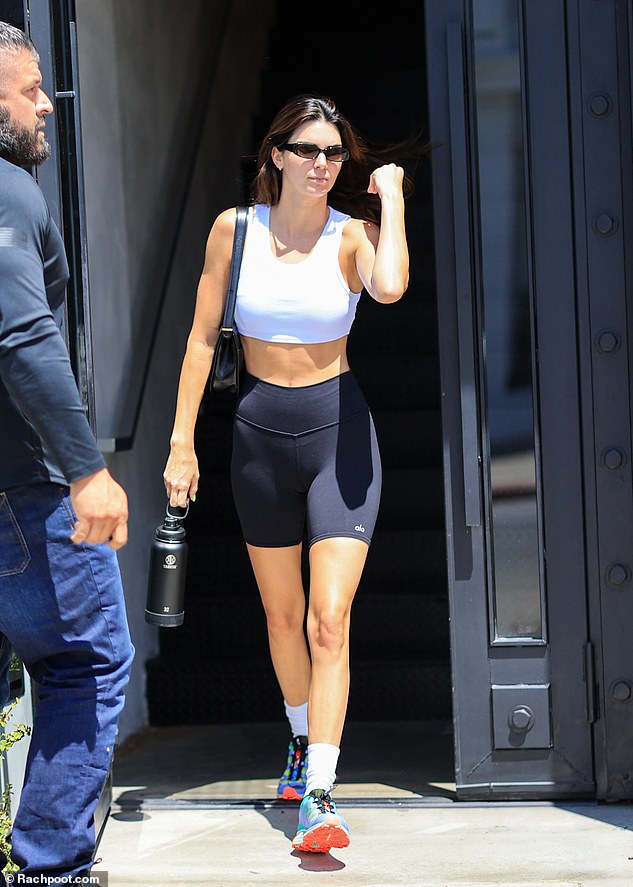 Kenny on the go: The model was seen holding an 818 water bottle to ensure she keeps hydrated in the LA heatwave

The sizzling sensation recently enjoyed a romantic lakeside getaway where she went Instagram official with her rekindled romance with NBA heartthrob Devin Booker.

They began dating in 2020 but a swirl of reports in June claimed that they had broken up – while leaving open the possibility of a reconciliation down the line.

They set reunion rumors flying almost immediately after their purported split, getting spotted together in the Hamptons on Fourth Of July weekend. 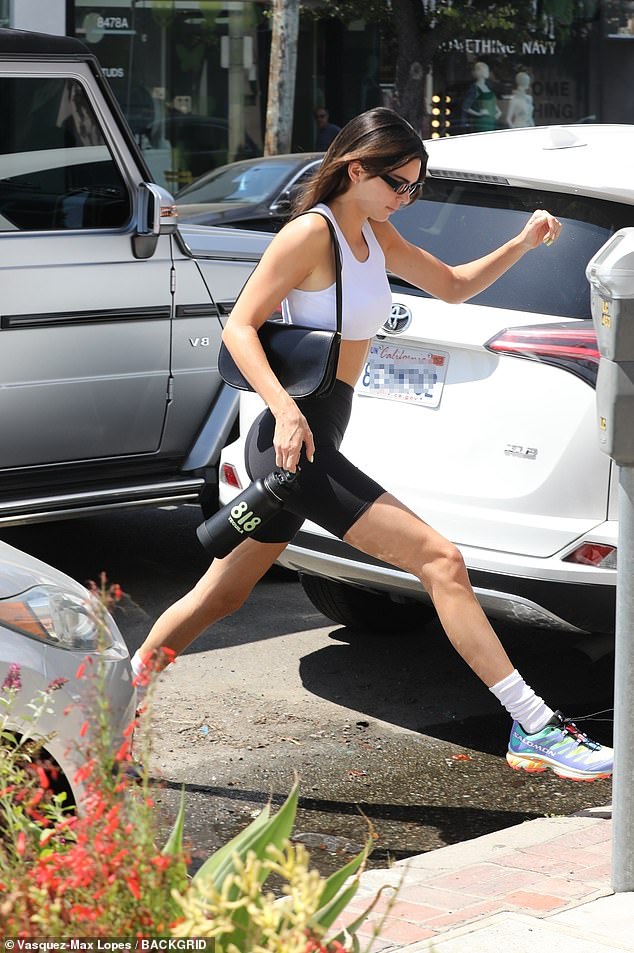 Work out: The star has to stay fit to be the number one cover girl in the world